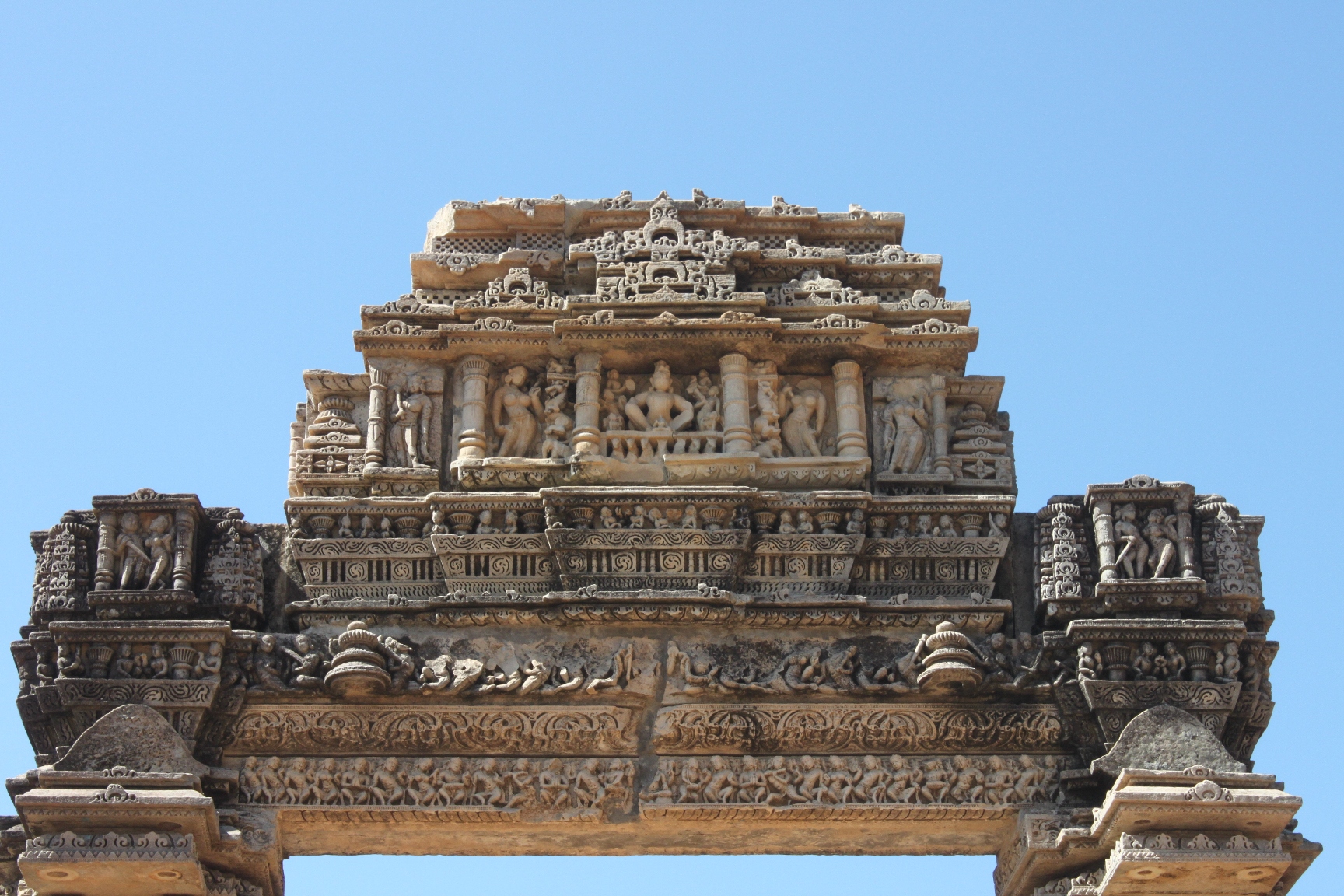 Terahi (तेरही) is a locality within the village of Chandoriya in the Shivpuri district of Madhya Pradesh. The earliest modern reference to the site is from Alexander Cunningham who describes two temples and a few inscriptions in the village. He tells these temples were accidentally discovered by his draftsman Jamna Shanker Bhatt, when the latter was searching for a village named Makhoba.1 Cunningham is silent on the name and legends associated with the place. Kielhorn2 tells that the present name Terahi is a corruption of Terambhi, the latter is mentioned in an inscription at Ranod. The same inscription mentions Terambhi as the seat of a Shaiva Acharya named Terambhipala, third in the disciple lineage of the Acharyas of Kadambaguha (Kadwaya). The Mattamayura sect received royal patronage under the Kalachuri kings of the ninth-tenth century CE, the matha at Terahi, along with the other Mattamayura Shaiva mathas, would have played a major role in spreading the teaching and learning of the Mattamayuras among the common mass.

Monuments – There are two temples and a Shaiva monastery at Terahi. Mohajmata Temple – This temple is situated on the outskirts of the village. The main temple is 15.5 feet long and 12.25 feet broad and it is fronted by a richly ornamented torana (entrance portal), about 18 feet away from the main temple. The temple was found in a ruinous state with its shikhara fallen over its garbha-grha but the torana was discovered in a fair state of preservation. The conservation work of the temple was taken up in 1934 by the Gwalior State Archaeological Department.3 The torana stands on a sound foundation and was found intact during the discovery of the temple, though the temple was found in ruinous condition. The style of the torana is simple, it has two free-standing pillars supporting a series of lintels above. All the surface is exquisitely carved with various images, sculptures, and various decorative motifs. The pillars stand over molded adhishthana containing a rathika niche carrying a standing couple on all sides. Above this adhishthana rises the shaft of the pillar with the bottom portion designed as a miniature temple with proper shikhara. In this temple are shown various forms of Vishnu, Varaha, and Vishnu in the front and Harihara and Hayagriva in the back. On the lateral faces are Brahma, Ganesha, Parvati, and Balarama. Above this temple block is another rectangular block carrying secular images of dancing figures. Above this is placed a kirtimukha from whose mouth issue bead festoons.  Above this portion is a ghata-pallava motif topped with another kirtimukha. Above this second kirtimukha are placed protruding brackets supported by flying figures carrying garlands. The portion above has floral decorations and is topped by the abacus of the pillar. The capital block above the abacus has provisions for images on all sides. Kartikeya and Indrani are present over this block in the front, and Chamunda and Vaishnavi take the corresponding spot in the backside. Two makara heads are placed over the abacus, probably to support curved loops as seen in the Gyaraspur Hindola Torana. An image of Surya riding over his seven-horse chariot takes a prominent place over the lintels. The lintels below carry images of dancers, musicians, and flying celestials holding garlands. The image in the spot corresponding to Surya on the back side is missing, however, from its remains, it appears to be an image of Vishnu. 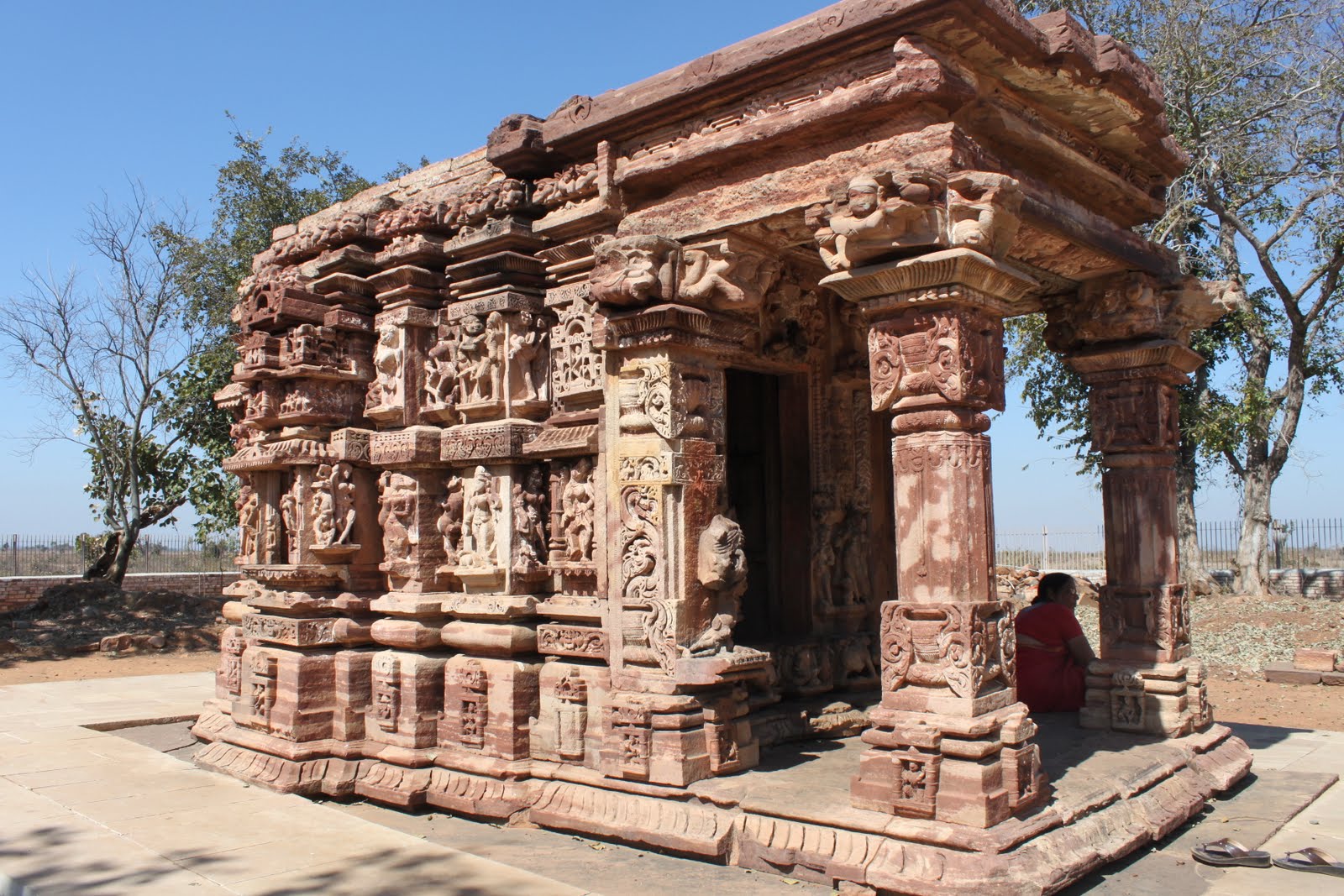 The temple is composed of a garbha-grha, antarala, and a mukha-mandapa. The latter is supported by two pillars and two pilasters. On the plan, it is a pancha-ratha temple with five projections, one bhadra, two prati-ratha, and two karna. As these projections are in three different planes, therefore the temple falls under tri-anga category. The vertical elevation consists of adhisthana, jangha, varandika, and shikhara, the latter has not survived. The adhishthana has five moldings and carries niches on each of the ratha. The jangha is divided into two stories, both carrying niches on all the rathas and recesses. The niches on the upper story carry images of ghosts, pretas, and ghouls on all the rathas. The recess portion of the upper story has images of goddesses carrying a dagger and having terrific appearances. The pratiratha niches on the lower story have images of apsaras and damsels in various moods and postures. The karna (corner) niches on the lower story have images of various goddesses, probably of yogini asociations. The recess portion of the lower story is decorated with gaja-shardula motifs. All the bhadra niches are presently empty. The kapili portion also has niches with perforated windows aside, the latter allows light into the dark antarala. The niche in the south has an image of Varahi while the niche in the north has an image of Kaumari. The garbha-grha doorway has five shakhas (jambs). At the bottom are the river goddesses, Ganga and Yamuna over their respective vahanas, accompanied by dvarapalas. The lalatabimba has an image of a goddess riding over a ghost. It appears that the lintel carries a depiction of nava-matrikas as at the terminals of the lintel are found Brahmai and Maheshvari and in the recess are placed six matrikas. As attributes of all the matrikas are not carved therefore their identification is problematic. Strangely, Varahi is not present in the group as no figure is carved with the head of a boar. Vinayaki or Vigneshwari joins the group in the recessed space. Krishna Deva4 identifies the image in lalatabimba as Vaishnavi stating she is riding over a Garuda, however, in the sculpture it is clear that the goddess is riding a ghost but not Garuda. Or, is it possible that Garuda is carved in the appearance of a ghost as the wings behind the figure are very clear? Garde5 opines that the Kali image inside the temple at Ranod was probably the dedicatory deity of this temple and the image was originally enshrined inside this garbha-grha. He also tells that an attempt was made to restore that Kali image of this temple however the same did not get success. Krishna Deva also takes this temple to be dedicated to Kali and one reason behind the same might be the presence of images of ghosts, goblins, and betalas over the temple walls. In case the temple was dedicated to Kali, can the image present over the lalatabima be taken as of Kali? No foundation inscription has been found, however, a few hero stones from the early tenth century CE are preserved within the temple compound. Though these do not belong to the temple, however, help in dating the temple. In his comparative studies of the Gwalior region temples, Michael Willis6 dates this temple to the exterior of the mid-tenth century CE. Shiva Temple – This west-facing temple is composed of a garbha-grha, antarala, and a mukha-mandapa. On the plan, the temple is pancha-ratha with five projections. Niches are provided on the bhadra and karna projections, while the parti-ratha section is decorated with ghata-pallava motifs as a pilaster. The niches on the bhadra are capped with a chajja (awning). In the bhadra niches are found, Parvati in panchagni-tapa in the north, Kartikeya in the east, and dancing Ganesha in the south. The small niches over the karna projection has ashta-dikpalas in their respective directions. The shikhara is built of five bhumis (tiers) demarcated by a bhumi-amalaka at each tier. It is crowned by a large amalaka. The sukanasa over the antarala has a niche in the front with an image of Natesha. The garbha-grha doorway is composed of five shakhas (jambs). Over the lalatabimba is an image of Vishnu riding over Garuda. Over the terminals of that lintel are Brahma and Shiva. As the temple is dedicated to Shiva, therefore the presence of Vishnu over its lalatabimba is an interesting feature not generally found in Shiva temples. On either side of Vishnu, six figures each side, Dvadasha-Adityas are shown seated holding a shaft. The bottom of the doorway jamb has river goddesses, Ganga and Yamuna, with their retinue. Shaiva dvarapalas are present over the pilasters next to the garbha-grha doorway. Based upon its stylistic features, the temple is generally dated to the early ninth century CE. The monastery is an impressive two-story building. Looking at the remains of temples around the monastery, it appears that it was a significant institution during its heydays. As the other Shaiva monasteries in vicinity such as at Ranod, Kadwaya, Surwaya, Gurgi, Chandrehe, etc., the monastery at Terahi would also be under the Pashupata ascetics. As per the Ranod inscription, Terambipala was the ascetic in charge of the monastery at Terahi. The monastery would have continued under the guru-shishya lineage of this saint, however, such information has not come down to us.