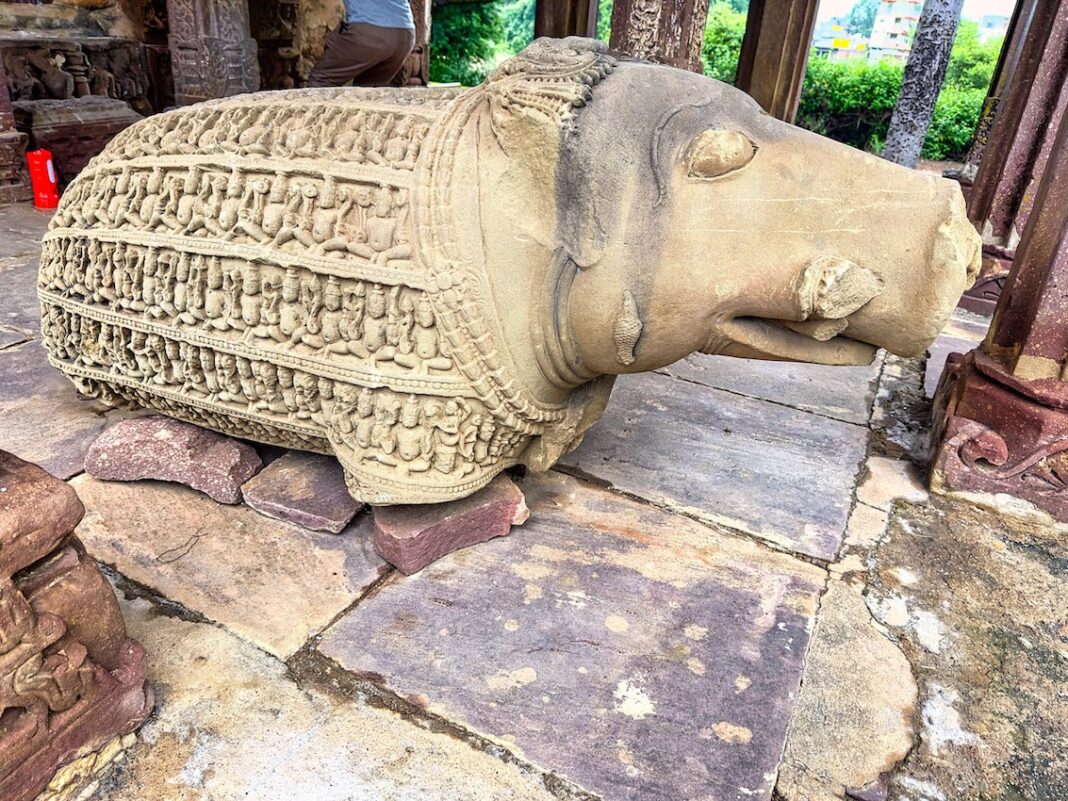 The village of Bilhari is situated in the Katni district of Madhya Pradesh. The original name of the village was Pushpavati as told by Cunningham1 who visited the village in 1873-74. One main reason behind the name Pushpavati might be the building locally known as the Palace of Kamakandala. The story of Madhava and Kamakandala is narrated in the Madhavanala-katha2. Madhavanala was well-born, skilled in music and singing, and lived in the city of Pushpavati. People complained to the king that his music is turning the heads of all the women who were getting infatuated with his beauty. The king banished Madhavanala from the city after knowing that the queen and other ladies of his house were also having similar effects by his charms. Madhavanala reached the city of Kamavati and found a lovely courtesan Kamakandala performing before Kama Sena, the king of Kamavati. Madhavanala impressed the king with his knowledge and skills and the latter granted him a few expensive gifts. But, the king was soon offended finding that Madhavanala publicly presented those gifts to Kamakandala. The king ordered Madhavanala to leave his city. While Madhavanala was about to leave the city, Kamakandala met him outside the town and they spent the night together in her house. Both were smitten, and lovelorn and exchanged long messages while Madhavanala wandered from place to place. At last, he arrived at Ujjain and took shelter in the temple of Mahakala. He wrote some verses in the temple in the anguish of his love. The writings stir the curiosity of King Vikramaditya, and he located Madhavanala. After knowing his problem, the king decided to unite both lovers. But to test their love, the king met Kamakandala in secret and propositioned her but being spurned told her that Madhavanala was dead. Hearing it Kamakandala collapsed and died and knowing her death Madhavanala died at Ujjain. Stricken with remorse, the king decided to die but he was saved by his Betal. Betal brought nectar and brought back both lovers to life. To unite both lovers, King Vikramaditya fought king Kama Sena and released Kamakandala from Kamavati. The couple lived happily thereafter.

Cunningham mentions the town would have held considerable importance during its heydays as evidenced by the ruins of temples and tanks. Traditions assign the foundation of the village to Raja Karn Dahariya during the period of Bhartahari, the brother of the legendary king Vikramaditya. All the ruins, including the temple of Vishnu Varaha, and tanks are attributed to king Lakshman Singh Parihar, who is said to have lived about 1000 years ago. T Bloch3 visited the village in 1907-08 and described the antiquities mentioning the temples had survived in such a ruined condition that it is now impossible to restore them. After a few years, in 1912-13, J F Blakiston visited the village and writes, “Bilhari is a veritable storehouse of ancient remains but hardly anything now remains in its original position. carved columns and sculptures, both figural and decorative, are scattered all over the village. In very many instances old columns and other stones have been used in the construction of modern houses. A few of the old idols are still worshipped, but as a general rule they are just lying about uncared for.”4 About the conservation of the Vishnu Varaha temple, Blakiston says very little is required in the way of conservation as practically nothing remains where it was originally erected.

Monuments: The only remains of any consequence at the time of Cunningham were the Lakshman Sagar tank, Dhabora Tal, the Vishnu Varaha temple, and the palace of Kama Kandala and the same was the case when Cousens5 compiled his list of antiquities in the Central Provides in 1897. Vishnu Varaha Temple – Cunningham6 mentions the temple is said to have been built of the stones of an old temple which were brought from the south Patpara hill about 300 or 400 years back, either by Lakshman Singh or Lakshman Sen, or by someone unknown. The only sculpture of importance as per Cunningham was a gigantic bracket capital lying in front of the door. This is a recent building as evident from its interior. The building starts with a square chamber that turns into an octagon from 10 feet above the ground. Over this octagon is placed a sixteen-sided drum that holds the hemispherical dome of the building. The present structure is constructed utilizing material that was available in and around. The doorway is also constructed with material fragments of a different temple that once stood at the site. The present doorway has the river goddesses, Ganga and Yamuna, standing over their respective mounts and under a parasol held by an attendant. Next to the river goddesses are dvarapalas standing under a serpent hood canopy. An image of a zoomorphic boar or Varaha is placed in the corner of the mandapa. The front portion of the face is broken. There are a total of six rows of figures carved over the body of this Varaha, the sixth row is on its abdomen and visible only when looked up lying down on the ground. For the purpose of the description of icons, we will take five rows but not the sixth row. A few notable image groups are the Sapta-matrikas with Ganesha and Virabhadha over the bottommost row, the third row from the bottom has the depiction of the twelve Adityas shown seated in yogasana-mudra holding two lotuses in their two hands, the scene of Samudra-manthan, Narayana lying over Shesha and tended by Lakshmi, the fifth row has Vishnu-dashavataras, etc. Remains of Bhu-devi are visible on the left side tusk of the Varaha.

Palace of Kama Kandala – Cunningham mentions this was originally a temple dedicated to Shiva as he found a linga in situ. The structure explored by Cunningham is presently known as Tapasi Math and is situated inside a fortress or a palace commonly known as Kamakandala Palace. The story of Kamakandala has already been narrated above.

Lakshman Sagar – Though the excavation of the tank is attributed to Lakshman Singh Parihar, however, another legend associates it with Raja Lakshman Sen, whose daughter married a Gond chief. From the daughter was born a son, named Magardhwaj and he became the first Gond king of Bilhari. As many crocodiles used to live in this tank, some people say that the mother was carried off by crocodiles. 7

T Bloch mentions two images of Surya from the village. Surya is shown seated over a chariot driven by Aruna. The chariot is drawn by seven horses, arranged in two rows of three and four horses. Below them is shown a single wheel. The author draws parallels from the Greek representation of Apollo, the Sun god, where he is generally represented riding a single-wheel chariot.