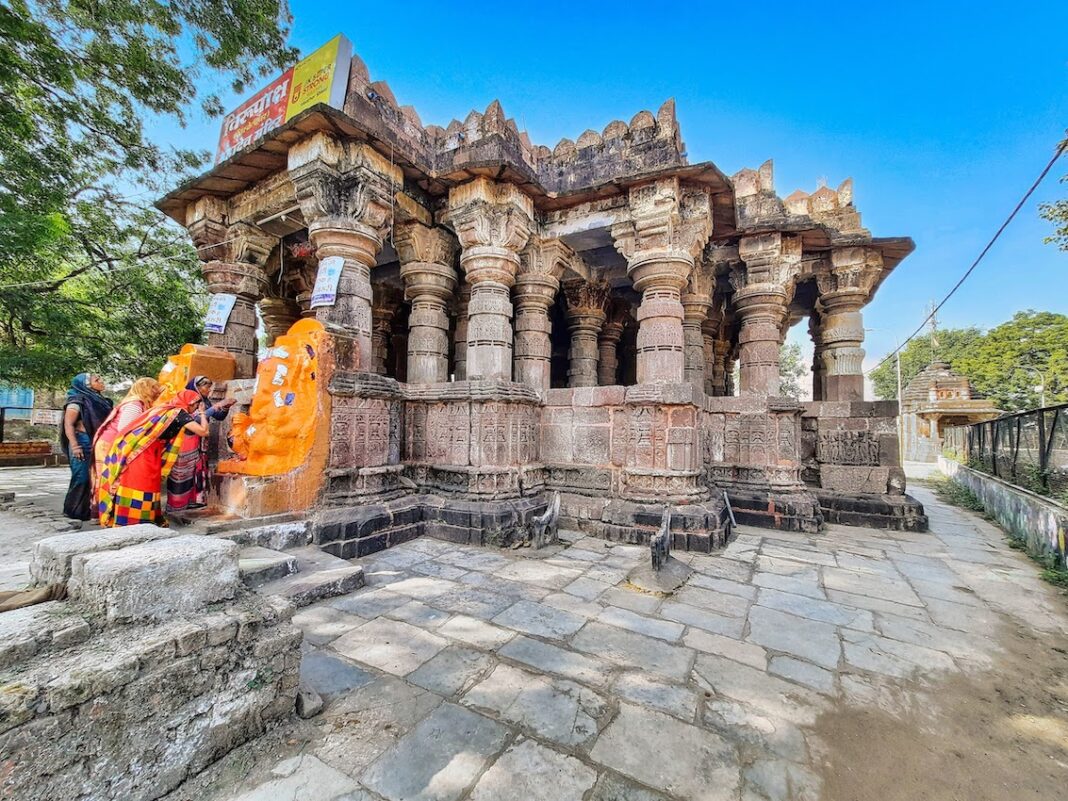 Bilpank (बिलपांक) is a village situated in the Ratlam district of Madhya Pradesh. The village is famous for its Virupaksha Mahadev temple which is frequented by pilgrims around the year. The present name of the village appears a corruption of Virupaksha that got changed to Virupank and later to Bilpank.1 Virupaksha Temple – The temple had been known as the Mahadeo2/Bilkeshwar Mahadevo3/Bipankeshwar Mahadev4/Mahadeva5 Temple to early scholars however it is now generally known as the Virupaksha Temple. S K Sinha tells that no legend connected with the temple is current amongst the villagers and it is generally believed by them that the temple flew into the village on one fine day.6  As per an inscription found in the temple, it is told that the Chaulukya (or Solanki) king Jayasimha Siddharaja found the original deity in a dilapidated temple and constructed a new temple to enshrine the deity. This suggests the present structure has at least two phases of construction. The temple is composed of a garbha-grha, antarala, sabha-mandapa with lateral projections in the north and the south, and an ardha-mandapa in the east where the main entrance to the temple is provided. It is a panchayatana (quincunx) temple complex with a subsidiary shrine located at each corner. This temple is generally considered the grandest temple of the western Malwa region by scholars.7 The external facade of the temple related to its garbha-grha and antarala is very queer and disproportionate to its internal design and dimensions. The walls that we see today are the work of Sailana Darbar during the last century. The garbha-grha and antarala are constructed over a high raise jagati (platform) composed of usual architectural tiers. The appearance of the projections of this jagati suggests that the temple was constructed in the pancha-ratha style. The present jangha portion of the temple is constructed with flat rows of stones devoid of any projections and recesses. In the center of each face of the jangha, an image is embedded into the wall. In the north is an image of a four-armed male deity standing with a few female attendants and below him is an image of Ganesha. On the west wall is an image of standing Shiva and on the north wall is an image of standing Vishnu. The original shikhara of the temple has been destroyed and renovated by the rulers of the Sailana Darbar (State). The present shikhara is pidha-type composed of seven receding tiers surmounted by an amalaka, kalasa, and a bijapuraka. At the main entrance of the temple are placed two large size images, one of a Shaiva dvarapala and another of Ganesha. A stone block is placed horizontally over the entrance reducing its height to a level that a visitor has to bow to enter. This stone black has been placed in recent times.7 The entrance leads a visitor to the ardha-mandapa that carries eight columns supported over a parapet wall (kakshashana). The ardha-mandapa is connected to the sabha-mandapa, the latter has twenty-two pillars. The ceiling of the sabha-mandapa is supported by twelve pillars, eight pillars in the center form an octagon carrying an octagonal ceiling and the rest four are in the corners to carry a circular ceiling above this octagonal ceiling. The circular ceiling is composed of nine bands of concentric circles in reducing sizes. Sixteen brackets are provided to support this circular ceiling and these are adorned with figures of apsaras in different moods and modes. Fifteen bracket images are in place, one is missing. Currently, an iron grill is placed over the octagonal ceiling, which restricts views of the bracket figures and the circular ceiling above.
The antarala ceiling has three blocks, the central block has a full-blown lotus surrounded by various images on its four sides. In the south is a frieze with images of Brahma, Shiva, and Vishnu, all shown with their respective consorts. The frieze opposite to it, in the north, also has three celestial couples however they cannot be identified. In the other friezes, in the east and the west, are shown standing nava-grhas. The entrance to the garbha-grha is made of seven shakhas (jambs). At the bottom of the doorjamb are the river goddesses, Ganga and Yamuna. They are both accompanied by a Shaiva and a Vaishnava dvarpalas and a few female attendants in between, and Kubera at the outermost jamb. Ganesha is present at the lalata-bimba. The lintel above has seven niches carrying Shiva and Lakulisa with other unidentifiable deities/figures. The garbha-grha is approached through a flight of three steps down from the antarala. A modern brass yoni-patta has been installed inside the garbha-grha. Four pillars are erected around the shiva-linga forming a mandapa and four pilasters are in the corners of the garbha-grha. The ceiling of the garbha-grha is composed of eight concentric circles supported over eight brackets. These brackets might have figures of apsaras however none has survived. The western wall of the garbha-grha has three embedded images, of Ganesha, Shiva-Parvati, and a standing deity. The garbha-grha doorway is composed of seven shakhas (bands). Ganesha is present over the lalata-bimba while in the upper lintel is Shiva with Uma in the center flanked by Brahma and Vishnu on either side. Lord Virupaksha is installed as a linga in the garbha-grha. The inscription of Jayasimha Siddharaja praises the presiding deity of the temple, the lord Shiva bearing the name Virupaksha, one who is remembered by the eight-eyed Brahma, is chanted by the twelve-eyed Kartikeya, is bowed down by the thousand-eyed Indra, and the lord of serpents with two thousand eyes, and who is enamored by women with lovely eyes.
All the subsidiary shrines at the corners are composed of a garbha-grha, antarala, and an ardha-mandapa. The shrine in the southeast is dedicated to Shiva, the southwest is dedicated to Ganesha, the northwest is dedicated to Vishnu, and the northeast is dedicated to Sapta-matrkas though it has an image of Hanuman at present. One shrine has an elaborately decorated garbha-grha doorway carrying various images and motifs.