Introduction – Badoh and Pathari are twin villages, separated by a pond. This separation is no more distinctly visible in current time, due to expansions, however both villages are different entity in the government records. Badoh-Pathari held much importance in medieval period, as deduced from the monuments found in the villages and in near vicinity. As per locals, it was called Batnagar in old times, however there is no proof to support this. We do not have much information about the history of these villages, however it can said with certainty that these were under Pratihara and later under Rashtrakuta empire.

Monuments – There are many monuments of interest in these two villages, ranging from 5th century AD to 11th century AD. 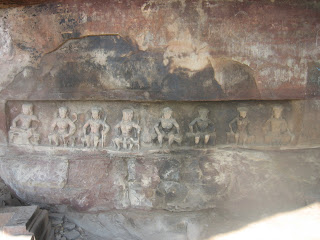 1. Sapta-Matrika Sculptures – On a hill, bifurcating road between Badoh and Pathari, are carved one of the earliest representations of Sapta-Matrika. Sapta-Matrikas images are accompanied by Veerbhadra on left side. Sapta-Matrika worship was very prominent during Mauryan and Gupta times, however it went into oblivion after that. Sapta-Matrikas are Umeshvari, Vaishnavi, Brahmani, Kumari, Chamunda, Varahi and Indrani. In later representations, we usually see these carved at the entrance of forts and temples. 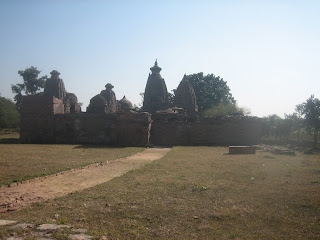 2. Jain Temple – This 10th-11th century temple was originally a Hindu temple, later converted into a Jain shrine. There are about 25 small shrines inside this temple complex. In middle of the complex is a raised platform with a roof supported on pillars. The different shrines seem to be constructed in different times between 10th to 13th century, as can be seen from their roof (sikhara) styles. The main shrine faces north. There are various Jina images installed in all the shrines inside the complex. The temple is in dilapidated condition and needs serious clearing of the sculptures. 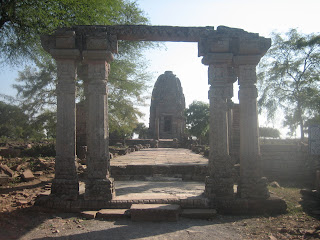 3. Gadarmal Temple – Local people says that this temple was built by a gadaria (shepherd) hence the name of the temple. The temple can be dated to 9th century. This is the biggest monument among all in these villages. This is a sapt-ayana (seven-shrines complex) temple. The temple was dedicated to a goddess or goddesses as seen from the main images on the door lintel and around the temple exterior wall. This temple was preserved by Gwalior Archaeological Department in 1923-24. Two lions are placed on the entrance, which leads to a raised platform approached by a flight of steps. The mandapa of the temple is supported on eight pillars, some have elephant capitals on top. The sanctum does not have any image now. Various apsarasa and ascetics are carved on exterior walls. The sikhara is in ruins, and it seems like a later addition to the temple. 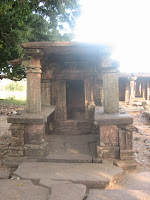 4. Dasavatara Temple – This temple complex has various small ruined shrines. It is believed that these were erected to house one or several avtars (incarnations) of Vishnu. There is a huge unfinished Varaha (Cosmic Boar ) image placed inside the compound. The temples are dated of between 8th and 10th century. 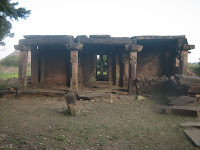 5. Solah Khambi – This structure has a flat roof supported on sixteen pillars. From the architectural style, this can be assigned to 8th or 9th century. There is no evidence of the nature of this structure however as it is situated at the banks of the nearby pond so it can be assessed that this was used for the purpose of entertainment. 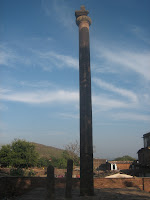 6. Bhim Gaja – This pillar is located in Pathari village. As per the inscription on the pillar it is said that this Garudadhvaja is erected by a chief minister of the Rastrakuta king Parabala in Vikram Samvat 917 (861 AD). The capital of the pillar has not survived.

Food and Accommodation – Badoh-Pathari are small villages, so you will not get proper accommodation here. It’s good to stay at Vidisha or Sanchi. You will get refreshments however proper food will be difficult to get.

How to reach – Pathari is located 12 km from Kulhar, which is nearest railhead as well, located on Delhi-Mumbai line. Nearest airport is Bhopal. Regular bus service is avialable from Vidisha, which is 84 km from Pathari. The last bus from Pathari to Vidisha was at 4.30 PM when I visited there, so please do proper enquiry so that you don’t miss the last bus.