PuratattvaIndia Monuments Navigator
Home Time Period Between 1001 and 1500 CE Udaypur – Epoch of Parmara Architecture
Facebook
Twitter
Pinterest
WhatsApp
Udaypur – Epoch of Parmara Architecture
Introduction – Located about 90 km from Vidisha, Udaypur held an important position in medieval period. It was an important town under Parmara dynasty. Parmara dynasty ruled the Malwa region and can be seen as the main successors of Pratihara dynasty. King Bhoja (1010-1050 AD) developed this town during his regime, while his son Udayaditya (1059-1082 AD) erected one of the grandest temple of that time in this town, which also reflects the extra importance and attention bestowed to this town in his regime. In later times, this town was annexed to Mughal empire and some monuments of little importance were erected during that regime. 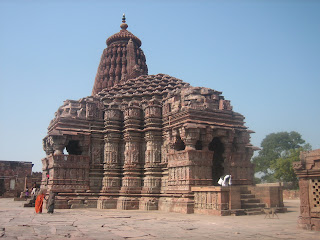 1. Neelkantheshvar (Udayeshvara) Temple – This colossal temple can easily be attributed as the grandest construction of the Parmaras. The crowning beauty of this temple is its well proportioned and gracefully designed spire and delicately carved medallions adorning its sides. Built of fine red sandstone and standing on a lofty platform, the temple consists of a garba-griha (sanctum sanctorum), a mandapa (assembly hall) and three pravesha mandapas (entrance porches). This temple is based upon sapta-yatana (five shrine complex) floor plan, the whole complex, including seven subsidiary shrines, is placed on a broad, tall platform. This is one of the earliest example of Bhumija temple architecture. Parmara dynasty appears to have been the first to develop the Bhumija temple architecture, with first temples at Un, now mostly damaged. The best preserved and finest example is this temple at Udaypur. The original eastern entrance is closed now, instead now the entrance is from western gate. The shikhara, based on a stellate plan, is divided into quadrants by four latas, or offsets, each one of which has five rows of gavakshas. The large hall has three entrance porches, one to the front and two to the sides, and walls that are richly carved. On external walls are carved Shiva in Ardh-nareeshvara, Andhakantaka, Natesha, Maha-kala, Chamundi iconography. There are ashta-dikpala (eight directional guardians) are also placed on external periphery. The sanctum door has Nav-Durgas on the door lintel, while Nav-Grihas (nine goddesses) on mandapa lintel.

There are various inscriptions at the entrance porch at eastern side. The inscriptions tells about the grants from King Udayaditya to this temple.

Food and Accommodation – Udaypur is not a very big town, however there are enough options for snacks. You might not get good lunch or dinner options, but you can very well survive with the local options. Accommodation is not proper in the town, better option would be to stay in Vidisha or Sanchi.

How to Reach – Udaypur is located 90 km from Vidisha. Regular bus service is available from Vidisha to Ganj Basoda and from there to Udaypur.
Nearest railway-head is Bareth, located on Bhopal-Bina line. Few trains from Bhopal stop at Bareth, many others stop at Ganj Basoda, which is another nearby railway-head. Nearest airport is at Bhopal.

PS: The bhumija architecture has a flat vertical projection in the centre of each of the four sides, the quadrants between being filled with rows of miniature shrines all the way up to the top of the tower.