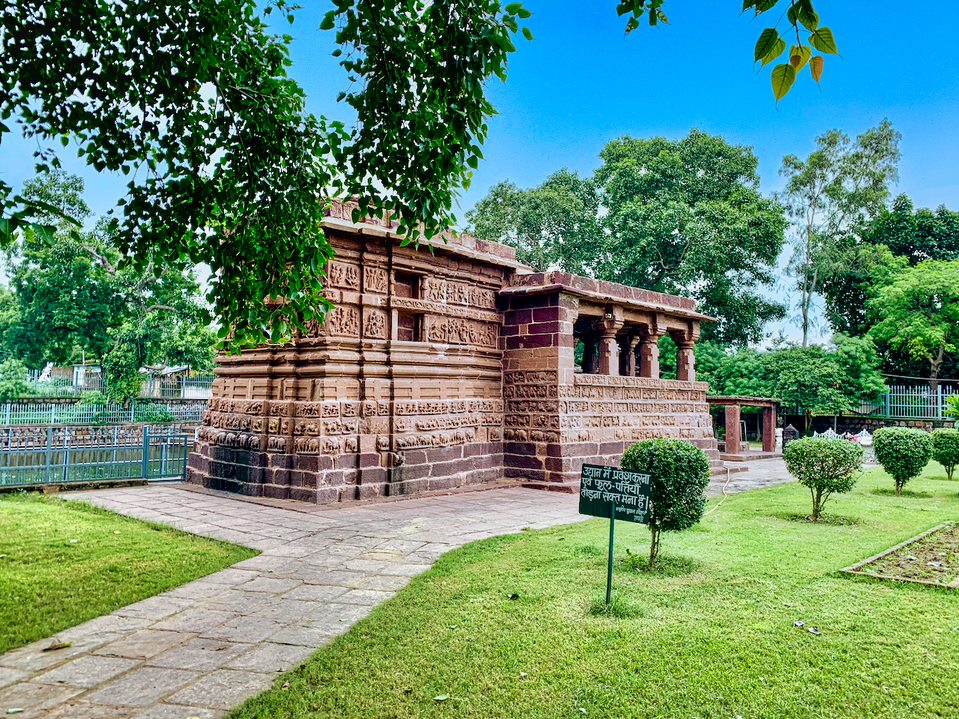 Deobaloda (देवबलोदा) is a village in the Durg district of Chhattisgarh. The antiquity of the village was described first by Alexander Cunningham in 1882.1 He mentions a legend that connects the Mahadev temple in Deobaloda with the Bhand Deul in Arang. The legend goes that the temples in Deobaloda and Arang were built by the same architect. When the construction was finished, the customary offerings were to be made by naked people. The architect climbed the temple at Deobaloda and his sister climbed the temple at Arang. Once they reached the top and saw each other naked, they jumped into the nearby tanks in shame. They were drowned and turned into stone. These stones of their naked figures were said to be visible when the water level went down in the tanks. Another legend mentions the temple was built in a single day, however, such a legend is popular at many other temples in central India and elsewhere. The Durg district gazetteer does not add much about the village except telling its population of about 800 persons in 1901. It also mentions that the boar hunting scenes carved on the temple resemble very much of the hunting how it was done during that time. However, there is nothing specific about the hunting scenes depicted in the temple except showing a few people surrounding a boar and piercing it with spears, etc.2 Longhurst visited the temple in 1907-08 and documented a few observations including the fact that the temple was not in use and thus required to be protected by the preservation act of 1904 passed by the then British Indian government.3 In absence of excavations, epigraphs, and numismatic evidence, it is not easy to place and understand the antiquity of the village. Therefore, the history of the village should be taken as the history of the district Durg or Chhattisgarh itself. What we know is that the village would have been under the Kalachuris during the 13th-14th centuries. During their reign, the village gained certain prominence and a tank was excavated and a temple was constructed next to it. 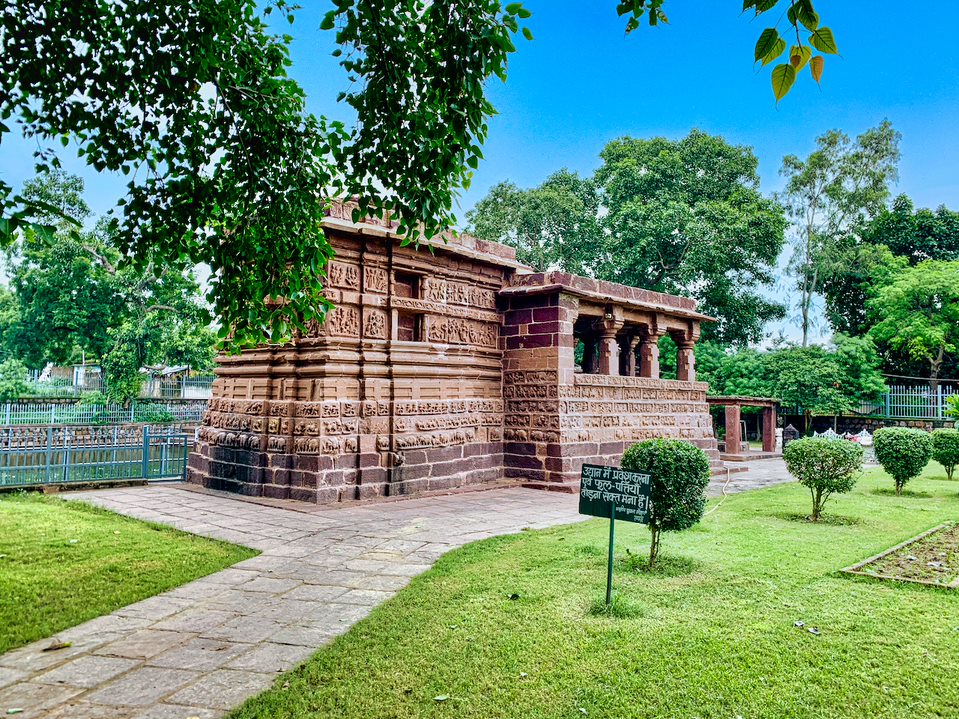 Mahadev Temple – The temple faces east and consists of a mandapa, antarala, and garbha-grha. There are two entrances to the mandapa. The one in the east has a flight of five steps and the one in the north has a flight of seven steps. The entrance on the north connects that temple to the tank. The temple stands over a jagati (platform) that follows the contours of the sapta-ratha pattern of the temple vimana. The jagati of garbha-grha and antarala has six moldings but seven moldings for mandapa. The bottom three moldings are plain, and above three are friezes depicting elephants, vyalas, and nara (humans) respectively. The elephant frieze has elephants in movement interspersed with horses, dancers, and warriors. The uppermost frieze of nara (human) figures has scenes from the Puranas, warriors, and erotic scenes. The extra seventh frieze of the jagati below mandapa depicts horse-riders. Hunting scenes of boar and deer on the nara-frieze of mandapa are representations of the tribal background of the region. In one boar hunting scene, a king is shown riding a horse with an umbrella above him. In another scene, a queen is being carried in a palanquin. Pyare Lal Gupta4 mentions scenes of bear hunting telling that bear hunting was in vogue due to the bear population in the area during that period. However, I am not able to identify a bear hunting scene in the frieze. Bajpai5 identifies one scene with Vishvamitra carrying a vajra and attacking Vashishtha when the former fought for the cow Nandini.

The jangha is divided into two tiers separated by a median band. Bhadra niches on all the walls are presently vacant. In the other niches are present various deities and apsaras. In the south, the upper tier has Varaha, Narasimha, Agni, Hanuman, a goddess carrying a sword and shield, a female dancer with musicians, and the five Pandava brothers. The lower tier has two four-armed figures of Parvati, Shiva as Gajasuravadhamurti, a female carrying a bow and an arrow, six-armed dancing Shiva, and a four-armed goddess. 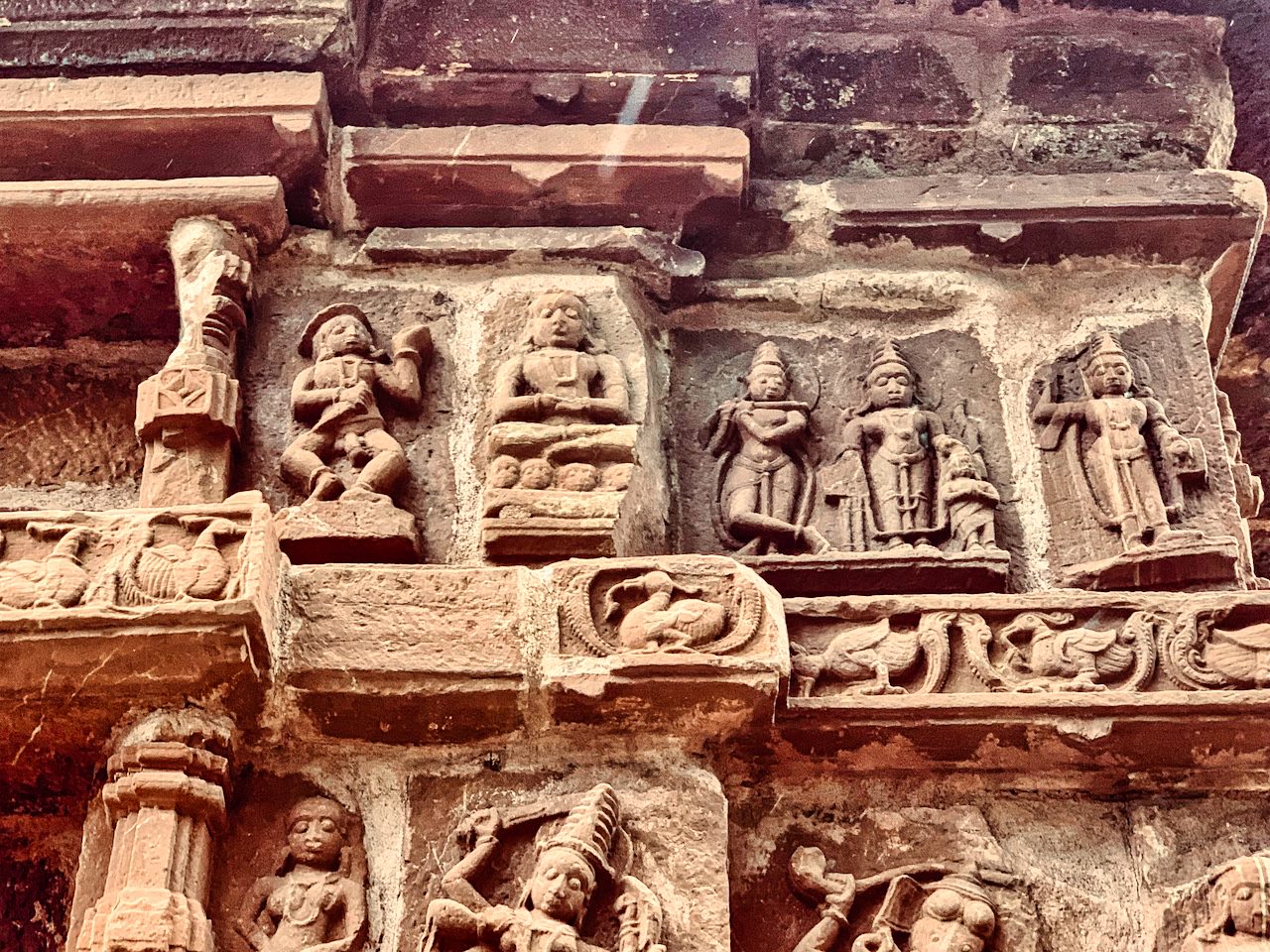 The sculptures on the west façade include dancing Ganesha, Mahishasuramardini, Vishnu, Parvati, Bhairava, Krishna, and various scenes depicting dance and music. There is an interesting image of a yogi seated in padmasana-mudra over four human heads. Whether this represents any tantric connection cannot be confirmed as we do not find any other similar sculpture within the temple. The sculptural pattern on the northern façade is also varied and diversified. On the upper tier are shown Shiva drinking poison, Krishna slaying Dhenukasura, Vishnu as Vamana taking donations from Bali and Shukra, a fight scene between Arjuna and Karna, Krishna playing flute, Vishnu as Trivikrama and an amorous couple. The lower tier has a panel with two images of Parvati and one of Shiva, all separated by mango trees. On the same tier are found dancing Ganesha, Mahishasuramardini, a tribal woman holding a bow, dancing four-armed Bhairava, etc.

The mandapa has a half-wall running all around mounted with half pillars to support the roof above. It has four central pillars that are carved exquisitely with images. Among the images on the four faces of these pillars are found Hanumana, Mahishasuramardini, Bhairava, Varaha, Krishna, and Saraswati among others. A niche, provided in the eastern lateral wall on the south, of the mandapa contains an image of Ganesha. The garbha-grha entrance doorway is built with three shakhas (bands). At the jambs are the river goddesses standing cross-legged without their vahanas (mounts), four-armed Shaiva dvarpalas, and four-armed Parvati. In the lalata-bimba is Ganesha and a lintel above carries niches containing images of Hanuman, Saraswati, and Mahishasuramardini. Though Longhurst6 was inclined to assign this temple to the beginning of the 11th century CE, however he did not study the temple in detail. The temple is generally dated to the latter half of the 13th century CE under the Kalachuri rule.7 Misra8 assigns this temple to the last stages of art activities under the Kalachuris of Ratanpur as the denouncement in stylization is very evident and except for its doorway, figure work everywhere else on the temple is unimpressive.