Gandai is a village in the Rajanandgaon (राजनांदगाँव) district of Chhattisgarh. The village does not boast of rich antiquity and its history, in general, should be equated to that of the Rajanandgaon district and Chhattisgarh. As evident by the surviving temple of the Kalachuri period, the village gained some considerable importance during the Kalachuri period of the 13th-14th century CE and a temple was constructed in the village. During the British period, the village was a zamindari consisting of an area of 166 square miles comprising 86 villages.1 One-third of its area, about 46 square miles, was forest area and it was the main center of the Gond tribes. The zamindari was granted sometime during the 15th century CE to one Lingadarbey, a Dhur Gond, and a relative of the ruling king. The population of the village was reported 400 in 1910. 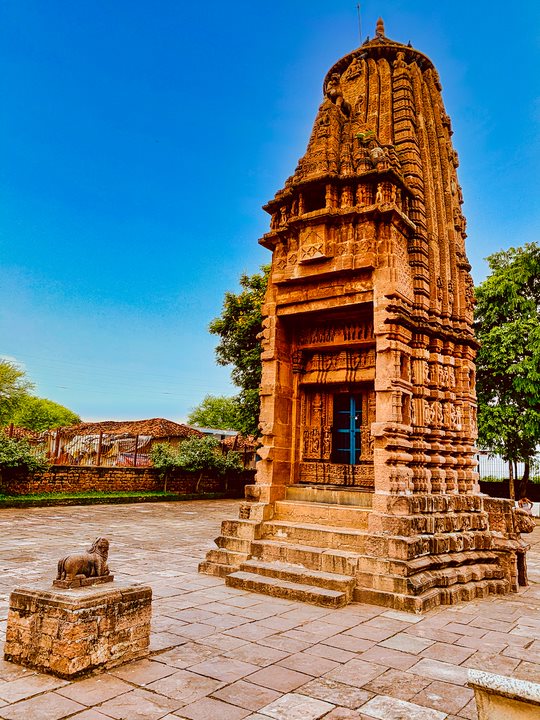 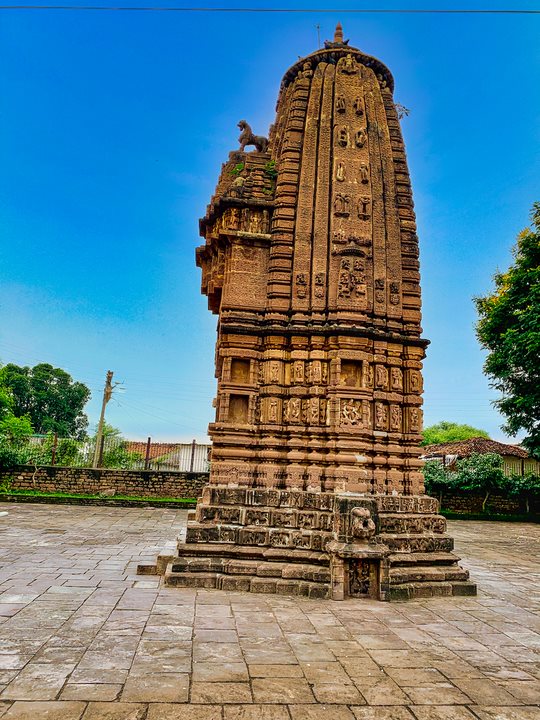 Deur Shiva Temple – The temple faces east and consists of a garbha-grha (sanctum) and antarala topped with a nagara latina shikhara (spire) above. There is strong evidence supporting the temple was once adorned with a mandapa. The present flight of six steps to ascend the floor of the antarala as well as the missing molding decoration in the front of the temple suggests that its mandapa is fallen. The Nandi that is now placed in front of the temple would have been inside this mandapa originally. Due to the precarious conditions of its foundations, the whole temple was dismantled from top to base and re-erected on a new foundation in 1916-17.2 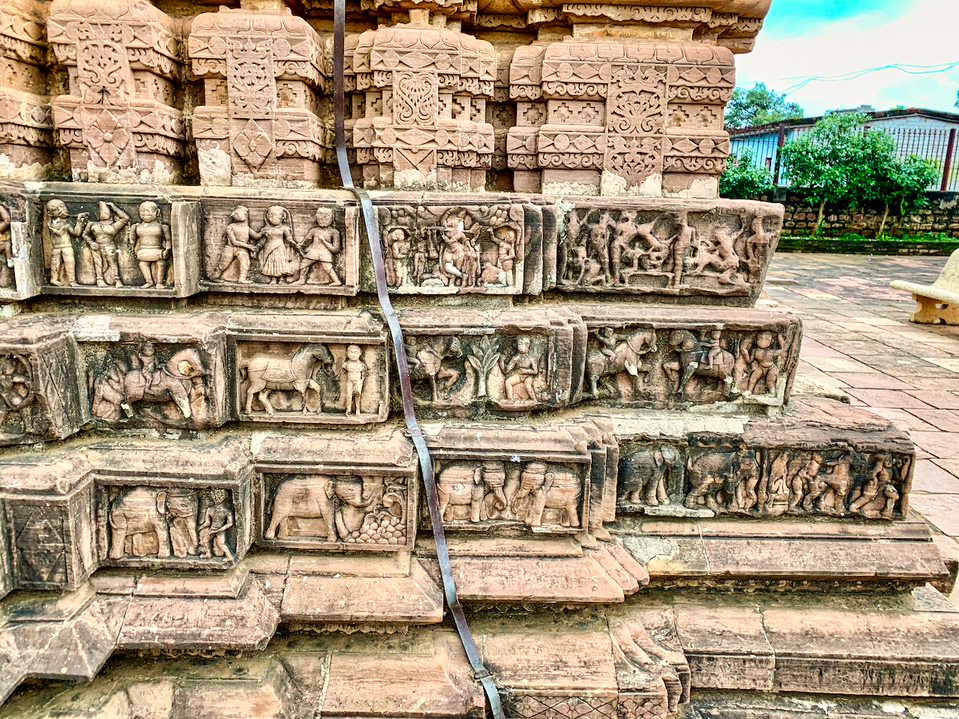 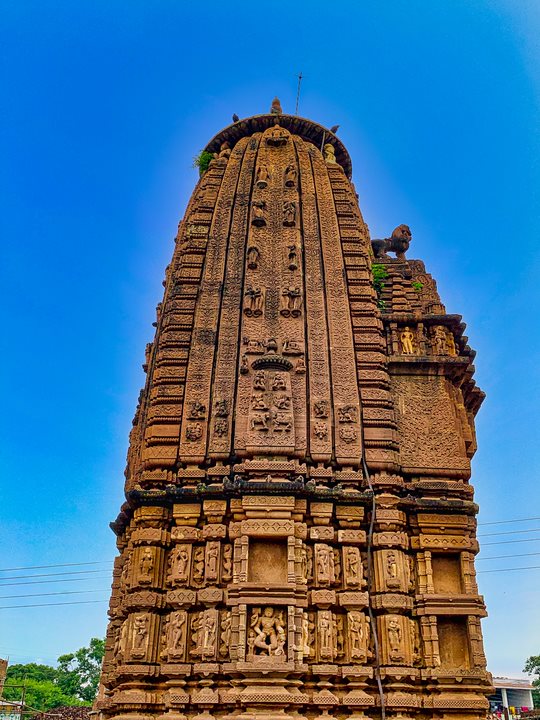 The temple is built in sapta-ratha pattern standing over a jagati (platform) consisting of six upa-pithas (levels). The above three upa-pithas are decorated with friezes of elephants, horses and musicians, and dancers. The last frieze of musicians and dancers shows tribal influence as evident from their clothing and ornaments. In the same frieze are also found scenes from Ramayana, tree-worship, naga-worship, and a few amorous couples. The jangha is divided into two tiers, separated by a pattika (median band). The kapili niches on antarala in the south and north are vacant. The upper bhadra niches in the south, west, and north are empty while the lower bhadra niche in the south has an image of Bhairava, a sati-pillar in the west, and Mahishashuramardini in the north. Among other deities are Narasimha, Varaha, and Vishnu on subsidiary projections in the west. 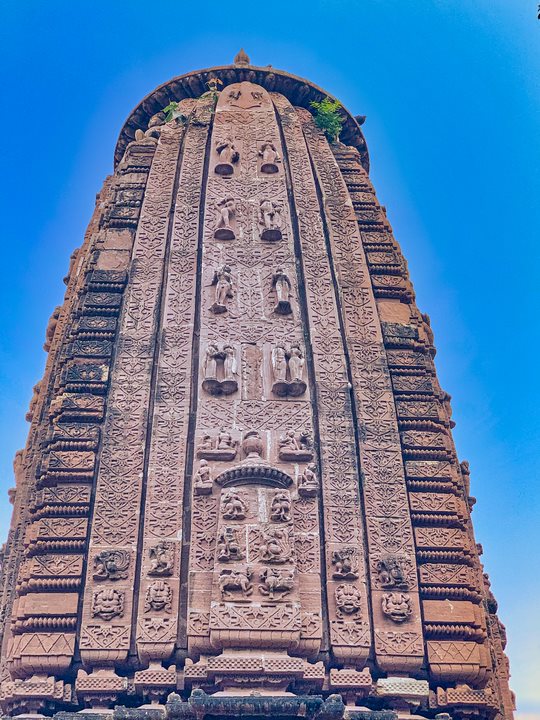 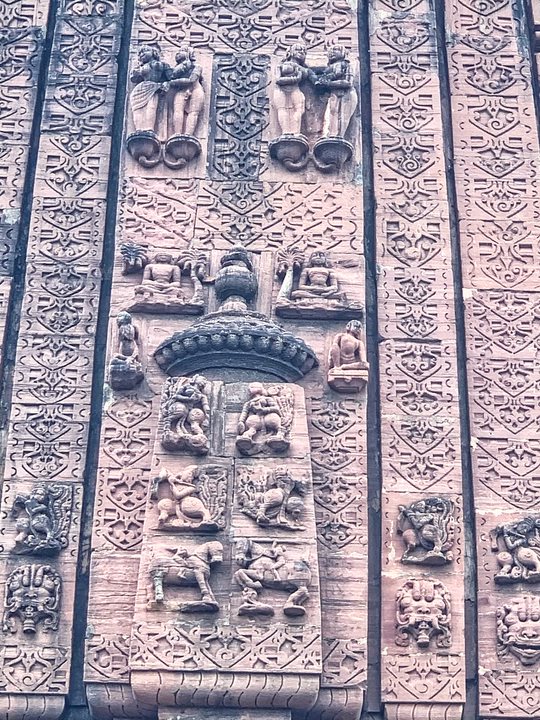 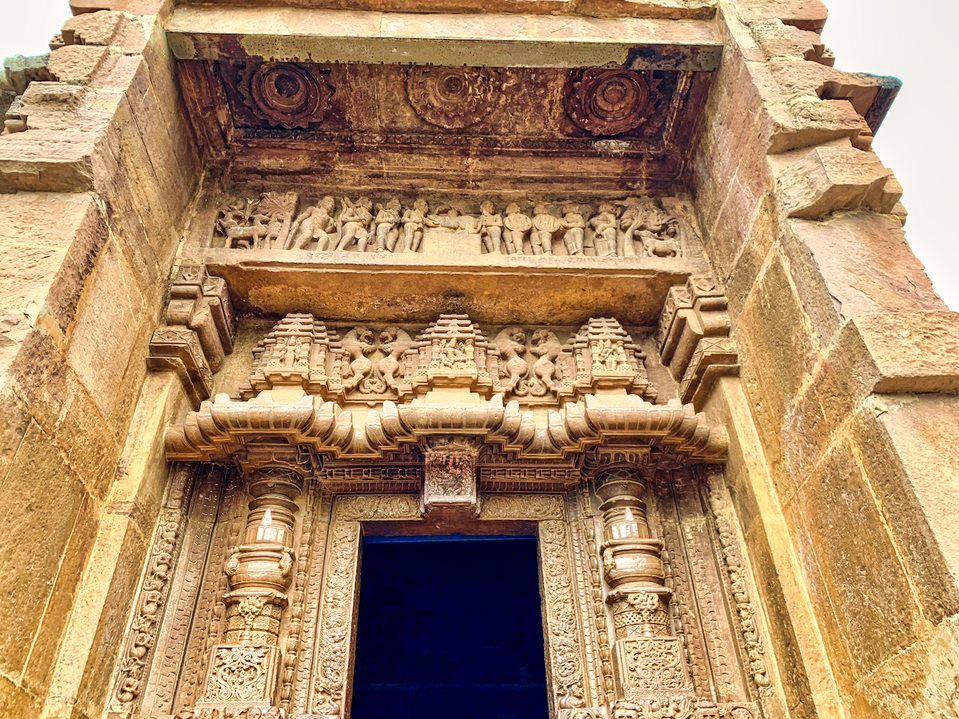 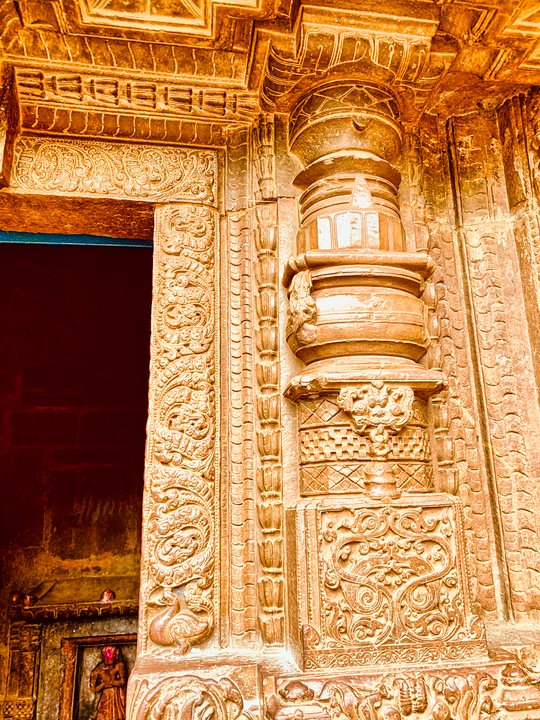 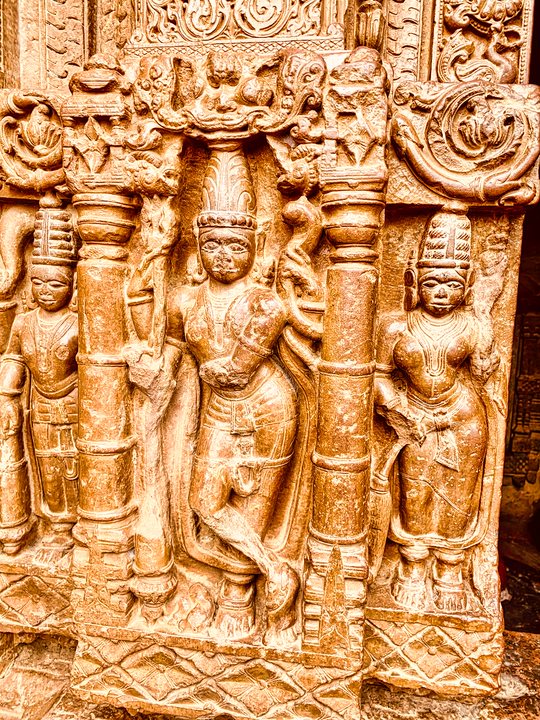 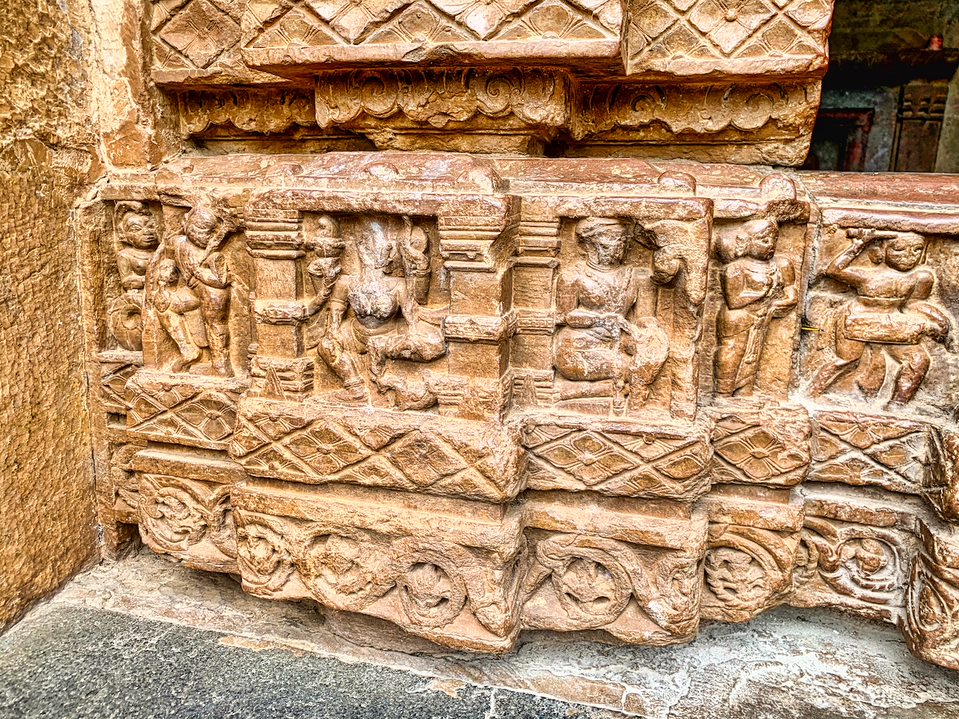 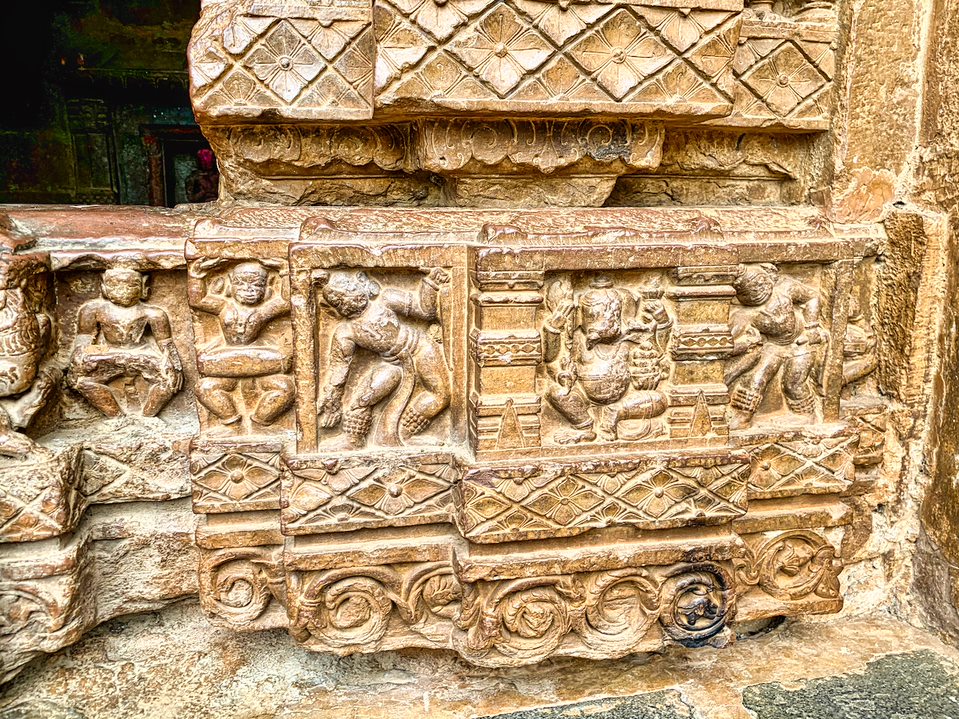 The garbha-grha doorway is built with three shakhas (bands). Over the jambs, at the bottom, are the river goddesses without their vahana (mounts) accompanied by Shaiva dvarapalas. The lalata-bimba has an image of Ganesha. The lintel above has Shiva-ardhanareeshvara in the central niche and Saraswati and Lakshmi in the terminal niches. Over the door-sill are present Kartikeya and Ganesha below the door jambs and musicians and dancers in the center. Inside the sanctum are two images, a king with his two queens seated in Anjali-mudra and Lakshmi-Narayana seated over Garuda. 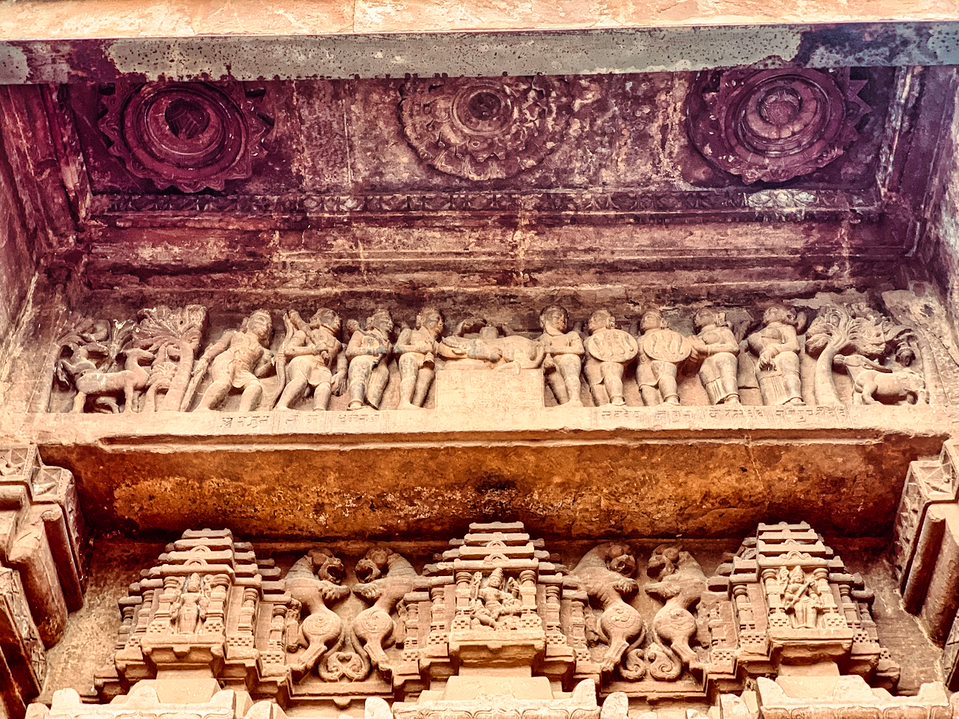 The most interesting sculpture is the worship of a Shivalinga by the Pandavas carved over a lintel above the garbha-grha doorway. In the center is seen Nandi and a linga emerging behind his back. On the right are three Pandava brothers, Yudhishthira, Bhima, and Arjuna, all carrying their respective weapons. On the left are the rest of the Pandavas; Nakula, Sahadeva, Kunti, and Draupadi. At the terminals are placed deers and cows in a jungle setting. The Nandi and linga are worshiped by two priests standing on either side. The sculpture carries an inscription identifying the Pandavas above.

Dating of the temple is carried out on paleographic grounds, the available inscription is written in the 13th-14th century CE characters, suggesting the same date for the temple.3 However, Bajpai4 assigns the temple to the 11th century CE however this does not go well with the sculptural and architectural studies. Misra6 assigns this temple as the last phase of the Kaalchuri art saying the sculptures are devoid of the earlier grace and bold conceptions. Reduced in size they are flat and unimaginative compositions and follow merely the stereotypes.