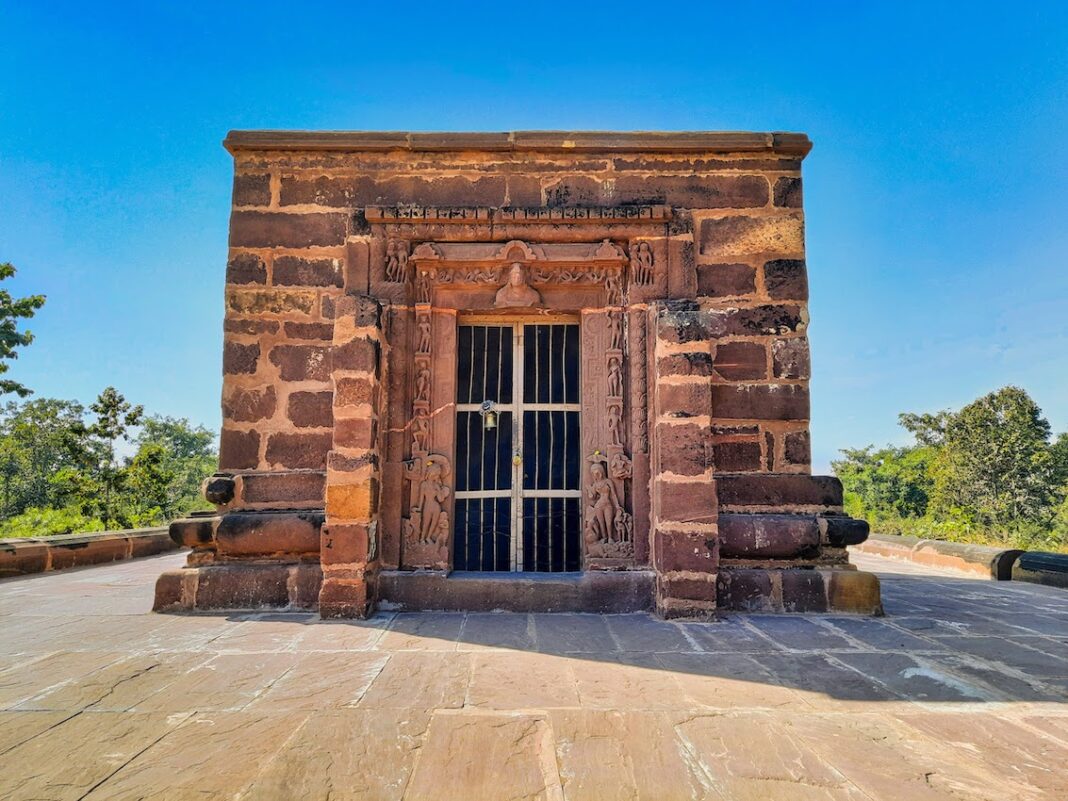 The village of Bhumara is located in the Satna district of Madhya Pradesh. This otherwise nondescript village has a very important monument of the Gupta period. Cunningham1 visited the village in 1873-74 and mentions its name was Bhubhara. He describes the dark red sandstone pillar locally known as “Thari-pahar” or “the standing stone”. This pillar on its lower part carries a description mentioning two kings. The inscription is dated to the Gupta period. Cunningham does not mention any temple as the temple was hidden under the thick jungles and was discovered in 1920 by J P Joglekar and N A Wartekar, of the Archaeological Survey, Western Circle.2 They mention that the pillar described by Cunningham was nowhere to be found as either it was carried away or fallen down and hidden by the jungle. Banerji3 tells the pillar still lies close to the village and is still called by the name “Thari-pahar”. Shiva Temple – The temple was discovered with only its garbha-grha and the rest of the structure had fallen. During the clearance of debris, many architectural fragments and elements were discovered that made Banerji suggest there once stood a mandapa. He also suggests the existing garbha-grha was enclosed by another chamber on all sides, allowing a covered circumambulation path around the garbha-grha, however the same is doubted by Odette Viennot.4 The garbha-grha measures 15 feet square and the larger chamber would have measured 35 feet square. The temple is constructed over a jagati (platform) reachable through a flight of steps. The reconstruction of the temple plan from Banerji shows a miniature temple on each side of these steps, constructed over a small platform measuring 8 feet by 6 feet. However, a later study from Williams mention the temples were not on the platform but preceded it, similar to the four subordinate shrines of the Devgarh temple.5 Williams says looking at the pieces recovered from the site, it is probable that the mandapa had three doors, interior columns, and perhaps a floral frieze along its top. However, she says that this suggestion remains conjectural. While she is doubtful about the mandapa, she is very sure about her reconstruction of the shikhara of the temple. Taking cues from other contemporary temples, she tells the stone slabs carrying long friezes of ganas recovered here formed the bhumis (stories) of the shikhara. The chandrasalas, recovered from the site in three different sizes, were used to decorate the shikhara on all three sides. The shikhara was topped with amalaka, and two such pieces were found at the site. The exquisitely carved doorway of the garbha-grha has survived in fine condition. As a regular feature in many Gupta period temples, this doorway is also designed in a T-shape pattern, with its lintels and sills extending beyond door jambs. The doorway is composed of three shakhas (bands). At the bottom of the jambs are the river goddesses, Ganga and Yamuna, standing over their respective mounts, makara, and kachchapa. They are accompanied by their attendants, a female holding a tray and a male holding an umbrella over the goddesses. The outermost shakha has a design of interconnected lotuses while the innermost shakha is decorated with geometrical figures. The middle shakha has four panels on each side, housing images of male and female figures. While the designs of the outermost and innermost shakhas continue over the lintels, the middle shakha is given special treatment. In the center, a large bust of Shiva stretches over the lower and upper lintel with a chaitya window provided above the bust. On either side of Shiva, three flying Gandharva figures, carrying flowers and garlands, are placed. The outermost shakha 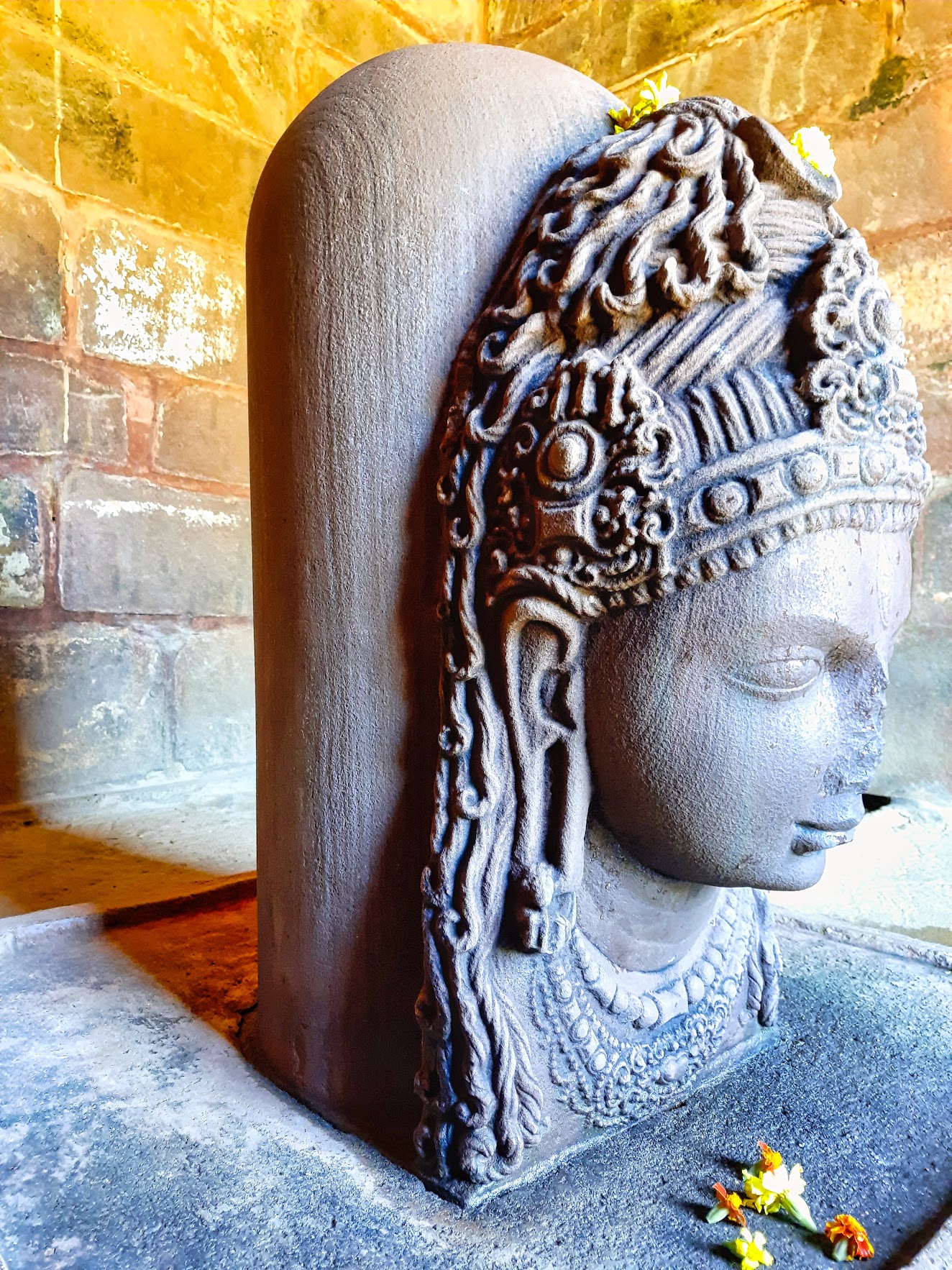 Inside the garbha-grha is installed a six-foot high eka-mukhi linga, depicting a face in the front profile. About 3 feet of its lower part is embedded under the stone pavement and the remaining 3 feet part is above the ground. This is a marvelous piece of sculpture, and many such eka-mukhi lingas have been found in the Gupta repertoire, some notable pieces are from Khoh, Udaygiri, Nachna, etc.

Banerji mentions discovering numerous sculptures during debris clearance work. Many of these sculptures are now housed in the Allahabad Museum and the Indian Museum, Kolkata. Many oblong shape stone slabs were unearthed and these were carved with niches separated by pilasters. These niches are decorated with the figures of ganas (dwarves) separated by kirti-mukhas, rosettes, or arabesque designs. The figures of ganas are in many varieties and postures and it appears the whole repository of ganas was present at Bhumara. A few ganas also have a face carved on their stomachs. Among these gana niches, we also find representations of a few deities such as Narasimha, Ganesha, etc. Banerji6 suggests that these slabs were used as the lower part of the mandapa above the plinth moldings. However, Williams7 is of opinion that these were part of bhumis of shikhara.

Other important pieces of sculpture discovered from the site are the chandrasalas or chaitya-windows having an image of a deity inside the arch. Based on their size, these can be divided into three categories, small, medium, and large-size panels. Two small-size panels have been reported, one contains an image of a dancing Shiva and another a dancing gana. Four medium-size panels have been found, and these contain figures of Ganesha, Brahma, Kubera, and Vishnu. Four large-size panels have been discovered and these contain images of Kumara, Mahishasuramardini, Surya, and Yama.8 The temple is generally dated to the early sixth century CE, Williams places it between 520-530 CE.