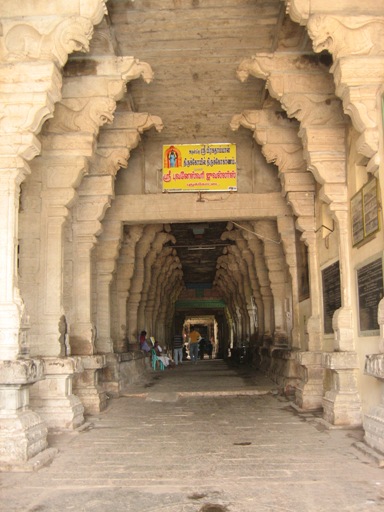 Thirugokarnam is a suburb in the Pudukkottai town and is famous for its Thirugokarnam Temple. The temple started as a simple rock-cut shrine which later got developed into a large temple complex through various additions and extensions made by different dynasties reigning at different periods. The sthalapurana of the temple narrates a legend stating that once the celestial cow Kamadhenu arrived late at Indra’s court and as a consequence was banished from the heavens to live an ordinary life at earth until she was able to expiated her sins by worshiping lord Gokarnesha. She started living at the hermitage of sage Kapila, and on latter’s suggestion started started worshiping an idol of Gokarnesha under a bakula tree (Mimusops elengi). Everyday she used to fetch Ganga’s water in her ears for abhisheka (ablution) of the idol. Due to this, the lord is called Gokarnesha or “Lord of cow’s ears”. When her time of salvation approaches, the lord put her to a scrutiny. One day, when she was returning, carrying water in her ears, the lord took form of a tiger and stopped her at a place, now known as Thiruvengaivasal. The tiger wanted to devour her but she asked for some time as she wanted to complete her ablutions. The tiger allowed her to go on her promise that she would return. The cow performed ablutions and returned to the tiger as per her promise. The lord, being satisfied with her devotion, transformed himself into his real form accompanied with Parvati. They later took the cow with them to the heavens. The legend tells that the tarn on the mountain was cut by the cow to store waters and a cleft on the top of linga is said to be hoof-print that the cow left as she bathed the idol in the sacred water1.

We have references that the temple and its lord was extolled by Nayanar saints, Sambandar and Appar, both lived during 7th century CE. Sambandar has mentioned existence of a cave temple as the Lord is invoked with the epithet Malaittalaivan and the sthala is a place where Shiva lives, sivan valumitam2.  Appar compares the hill of Gokarnam with that of Kailasha and the lord is told to hold a tanka and a sword in his hands and his crest is being mounted with the river Ganga3. However as Appar mentioned the place Gokarna to be surrounded by sea, therefore it is very probable that he may be referring to another famous temple of Gokarna in Karnataka state.

At some later point in time, a shrine for goddess Brhadamba was constructed inside the temple complex and it gained prominence during the Tondaman dynasty. Due to this, the temple complex is locally known as Brhadamba Temple or Arakasu Amman Temple. Goddess Brhadamba became the tutelary deity of the Tondamans. However, this was not the case with the earliest members of the dynasty. The originator of the dynasty, Raghunatha Raya Tondaiman (1686–1730) and his son, Vijaya Raghunatha Raya Tondaiman I (1730–1769), was consecrated at Kudumiyamalai4. However, the later Tondaiman kings made lavish benefactions to the shrine throughout the eighteenth century, and its Brahman priests performed the ruler’s installation rites, and the various other ceremonies, which expressed the line’s claim of kingship5. When Ramachandra Tondaiman (13 July 1839 – 15 April 1886) took the title of Brihadamba Das, the goddess Brhadamba gained prominence and supreme importance.

The goddess Brhadamba is also known as Arakasu Amman because of the state coin issued in her name. The Tondaiman kings had privilege of issuing their own coinage. Though their territory was under the British territory of Madras Presidency, however the Tondaimans exercised their privileges by issuing a coin as a token which can be used to buy small items such as fruits and snacks. This token was known as Amman Kasu, a small denomination coin where twelve Amman Kasu were equal to one quarter anna of that time. Another legend behind this issue tells that once a king lost an important document which he failed to find despite his best efforts. He then prayed to goddess Brhadamba and soon recovered the lost document. The king was overjoyed and minted coins with image of the goddess on one side. He used to distribute these coins to his subjects on special occasions of festivities.

Gokarnesvara Cave Temple – The present huge temple complex, which now houses many shrines and mandapas, began with a simple rock-cut excavation which by gaining multiple extensions in later periods resulted into the complex as we find it today. The rock-cut excavation was done on the eastern face of a low-lying hill. This excavation has a ardha-mandapa and a garbha-grha cell at the rear wall. The ardha-mandapa has two pillars and two pilalsters at the front dividing the hall into three bays. The pillars and pilasters are divided into square base and top sections (saduram) and an octagonal section (kattu) in between. The intercolumniation between the pillars are almost equal. The corbels above are curved and adorned with taranga (roll ornamentation) and median patta (band). These all characteristics are very typical of the early Pallava rock-cut shrines.

The southern lateral wall of the ardha-mandapa has a niche carrying an image of four-armed Ganesha. He is shown carrying sugar-cane or flower and a broken tooth in his upper hands, while one lower hand is holding a modaka while another resting on his thigh.  The northern lateral wall contains a relief image of Shiva as Gangadhara. Shiva is shown four-armed standing in tri-bhanga mudra, in one upper hand holding akshamala (rosary) and in another upper hand his tresses to receive Ganga, the latter is shown in female form in anjali-mudra, coming down from clouds. His one lower arm is in kataka-mudra while the other is resting over his waist. Shiva-Gangadhara icon is found in many caves attributed to the Pallavas, however this icon is not very frequently found in the cave shrines of the Pandya region.

On right side of the cave, to the south, are carved Sapta-matrikas accompanied with Shiva and Ganesha.  Shiva is shown with four hands and seated in ardha-padmasana-mudra, his upper two hands are in kataka-mudra and lower hands are kept near thighs. Two chauris (fan) are shown on either side of him. He is followed by Brahmi who is depicted with her three heads and four arms. She is the only matrika in the group who is shown with four arms, rest all with two arms. hands. Next to her are shown Maheshvari, Vaishnavi, Kaumari, Indrani, Varahi and Chamunda. Chamunda is shown holding a knife in one of her hands. She is also wearing a munda-mala. Ganesha is carved as the last member of this group. He is shown four-armed, in his upper arms he carries a sugar-cane and his broken tooth.

The rear wall has four pilasters corresponding to their counterparts in the ardha-mandapa. These pilasters are tetragonal throughout. The space between the inner pilasters is left as the opening into the cell, while the space on the sides is made into niches carrying inscriptions of late Pandya period. The cell inside is almost square and has a rock-cut linga almost occupying one-third of the space. The linga is placed over an avudaiyar (pitha or platform) composed of various mouldings; upana, jagati, vrtta-kumuda, lower kampa, kantha, upper kampa, pattika and prati. Presence of a rock-cut linga suggests that this excavation did not follow the contemporary Pallava practices but the practices as seen in other Pandya or Mutharaiyar shrines.

The earliest inscription found here is dated to 7th or early part of 8th century CE6. As this is not a foundation inscription, however it speaks about an architect who might be instrumental in the original excavation. This suggests that the cave-temple was excavated latest by the second half of the 7th century CE if not earlier. Like many other rock-cut shrines in the Pandya territories, this excavation is also in proximity of a Jain center. An inscription of later Pandya period mentions a grant made to a Jain temple.  This also suggests that the excavators of these rock-cut temples selected their rocks in proximity of an existing religious center, and took advantages of the same.