Kudumiyamalai is a village in Pudukkottai district of Tamilnadu, located about 20 km from Puddukkottai district headquarter. The temples of the village were first described in the Trichinopoly district gazetteer of 19071, a large Shiva temple named Sikhanatha or ‘the lord with the kudumi’ and a rock-cut shrine, the latter is suggested of Jain origin. The gazetteer also mentions that the village was also of interest as the place where the earlier Tondaiman kings went for their coronation.

In the inscriptions of the early Pandya and Chola period, the village is referred as Tirunalakkunaram, “the scared and prosperous hill”. From the twelfth century CE, the village started being referred as Shikhanallur, evidently because of the temple of lord Shikhanatha. The present name, Kudumiyamalai, is first found in a seventeenth century CE record of Mallappa Pallavarayar2. The etymology behind the name Kudumiyamalai is explained in the Pudukkottai State Manual3. The legend goes that once the temple priest gave his lover the flowers intended for divine worship. When the ruler unexpectedly arrived in the temple, he offered him the flowers worn by his lover as prasadam. The king noticed few hair in it and asked for an explanation. To conceal his offense, the priest asserted that the God himself had natural hair meanwhile praying to the lord to save him. His prayers were heard and a kudumi or lock of hair miraculously appeared on the linga.

Antiquity of the village goes back to pre-historic period as attested by various megalithic burial sites and cairns in vicinity. During the early centuries of the present era, Kudumiyamalai was an important Jaina center as attested by the rock-cut beds for Jain monks found in a natural cavern on the south-western side of the main hill. A Brahmi inscription4 of 2nd-3rd century CE in this cavern reads, “The pa(li)y made by Korrantay of Nalai”. 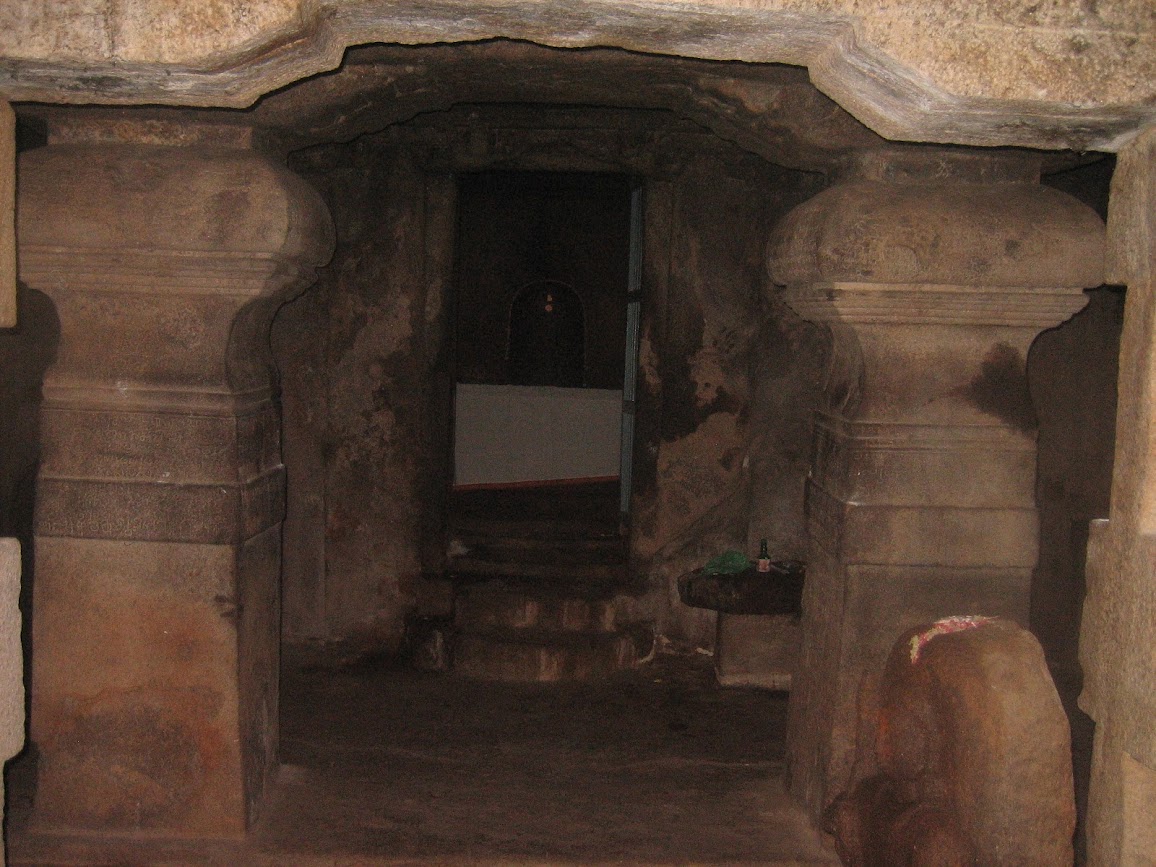 Cave Temple (Melaikoyil) – The cave temple is situated in the west of the village and excavated on the eastern face of a hill running north-south. This temple has been variously referred as Melaikoyil, Tirumulattanam and Tirumerrali in its inscriptions. The lord is referred as Perumanatikal, Mahadevar, Paramesvarar and Kunritan konta nayanar. The temple is planned with a mukha-mandapa, ardha-mandapa and a cell in its rear wall. The front façade has two pillars and two pilasters having unequal inter-columniation resulting in a wider central bay. The ardha-mandapa is wider than the front façade, allowing deep niches on its lateral walls. These niches are carved with dvarpala images. Both the dvarpalas are shown standing in tri-bhanga posture, with one hand at their waist and another resting over a huge club. Both are shown with a third eye over their forehead. The southern dvarpala is shown wearing a yajnopavita while the northern is without it. 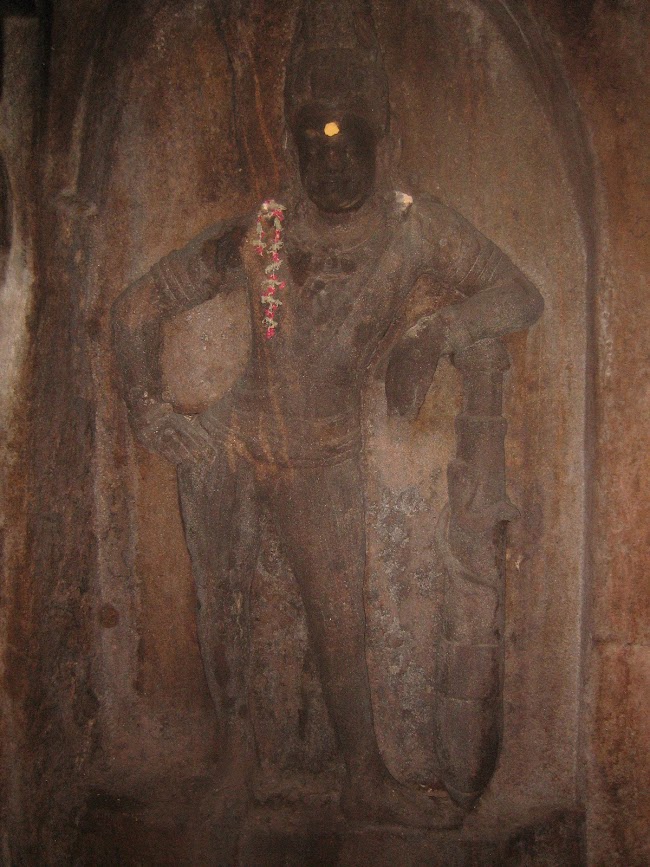 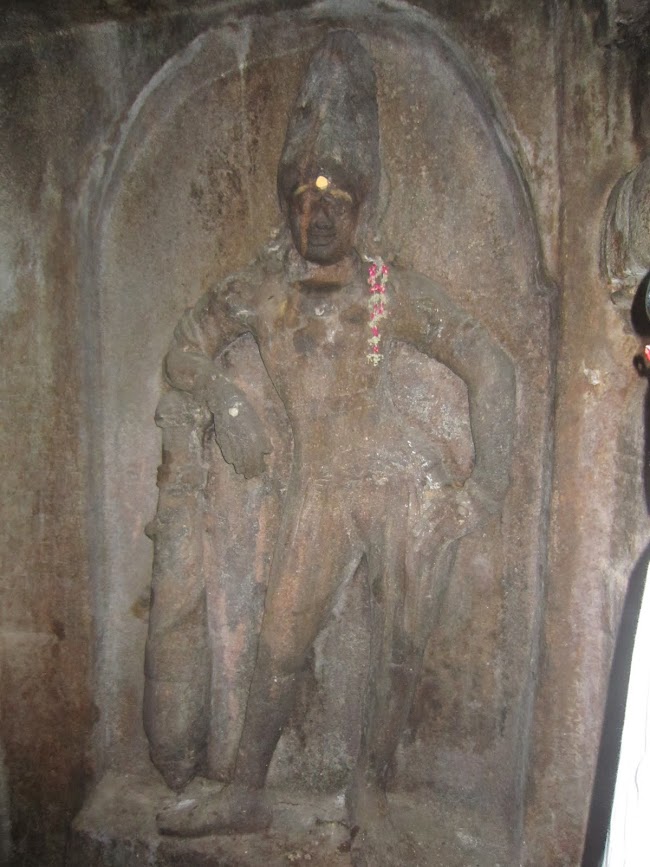 On the southern lateral wall of the ardha-mandapa is an inscription reading, “parivadinida”. Below this inscription is cut a niche housing an image of valampuri Ganesha, with his trunk turned towards right. Ganesha is shown with four hands, in his upper hand he is holding a broken tusk and padma while in his one lower hand he holds a modak while the other is placed over his waist. Valampuri Ganesha is also found in Vallam cave-temple of the Pallava period. However there are many differences in the style and execution of these two Ganeshas. 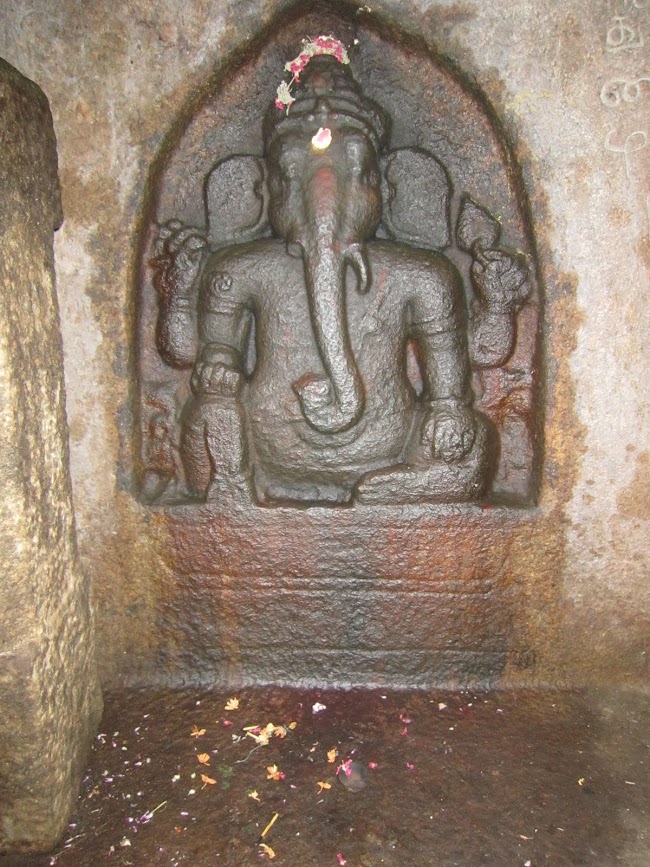 In the rear wall of the ardha-mandapa is cut the opening to the garbha-grha flanked with two tetragonal pilasters. Over the pilasters is placed a beam over which are shown four bhuta-gana in posture of supporting the beam with their hands. The bhuta-images at the extreme are facing out while the inner two images are facing towards the garbha-grha opening. The square garbha-grha is finished slightly above the ground floor of the ardha-mandapa, reached via three steps. In the center is provided a large square linga-pitha, cut from within the rock. This linga-pitha supports a rock-cut linga. 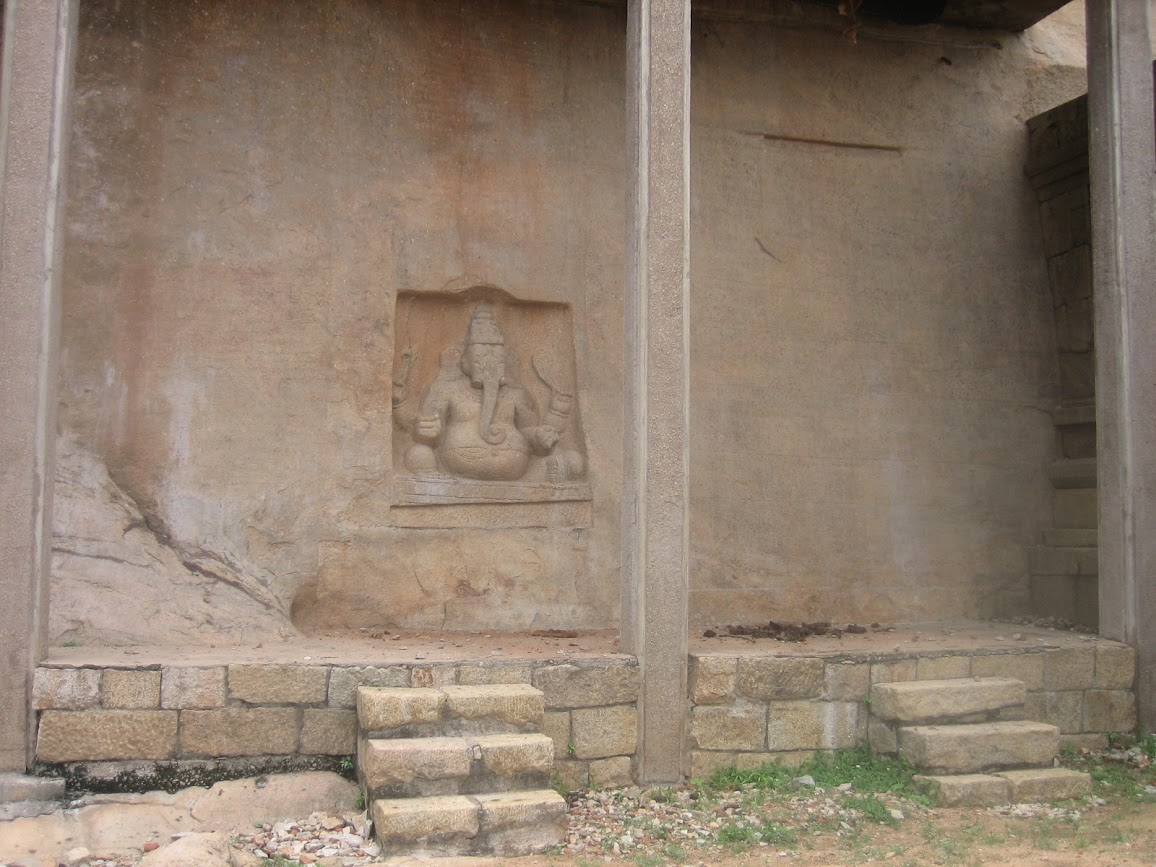 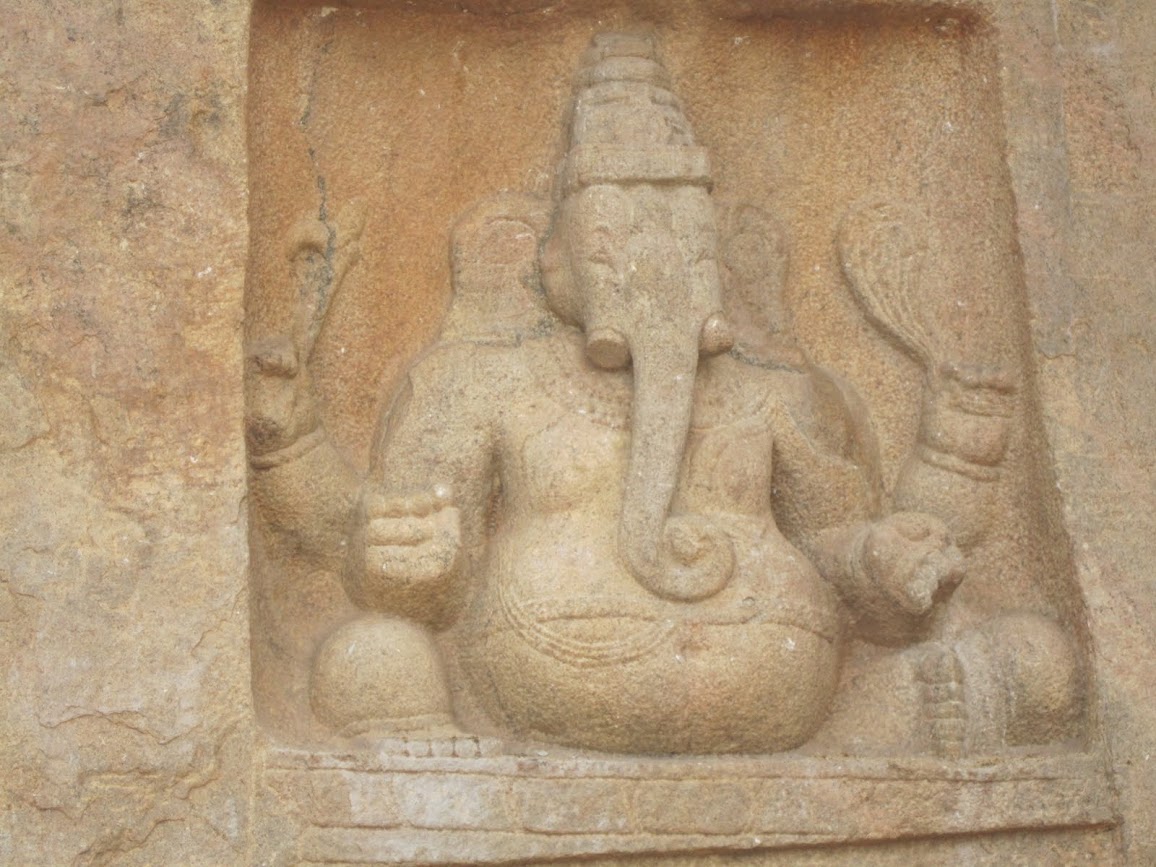 Immediately to the south of the rock-cut shrine’s façade is inscribed the musical inscription. We will discuss about this inscription in detail later. To its immediate south is carved a niche housing idampuri Ganesha with his trunk turned to his left. In his upper arms he is holding an ankusha and pasa while one lower arm is broken tusk and the object held in lower left arm is not identifiable. Dayalan mentions that the sculpture can be later than the cave temple whereas Minakshi5 believes that both the Ganesha sculptures probably belong to the same period, the Pallavas. This rock-cut cave temple was extended by Raghunatha Raya Tondaiman (1686-1730), the king of Pudukkottai, by building a mandapa in front of it. On the external facade of the cave, little north of the cave, are carved figures of sixty-three nayanars with Shiva with Parvati and Nandi standing in the middle. 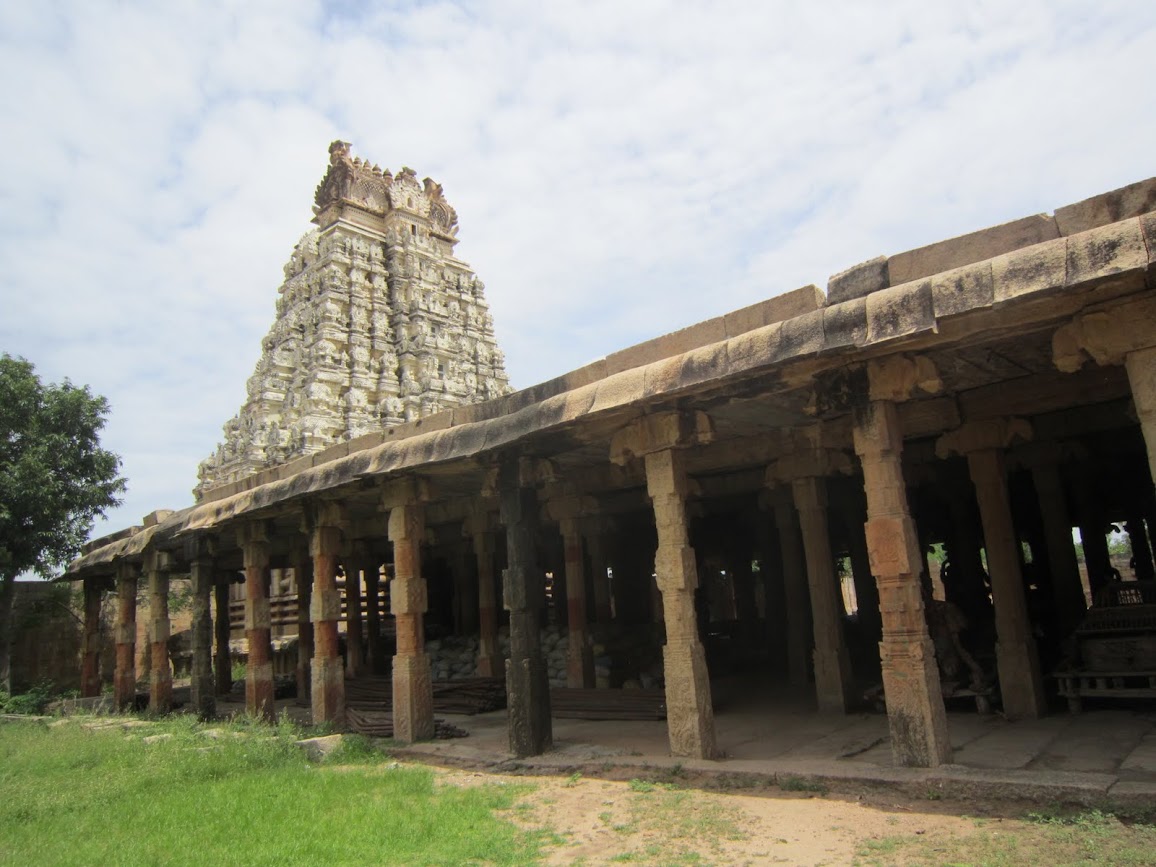 Shikanatha Temple – This is the main temple of the town. The present temple is the outcome of a continuous growth and extensions carried out in different periods. It consists of a garbha-griha, ardha-mandapa, maha-mandapa, sabha-mandapa, anivetti-kal-mandapa and ayirakkal mandapa. A visitor first enters the ayirakkal-mandapa (thousand pillared mandapa) which has monolithic pillars carrying sculptures of Hanumana, Matsya-avatara, Kurma-avatara, Varaha-avatara, Narasimha-avatara, Rati-Kama riding over parrots etc. Next is a larger hall known as anivetti-kal-mandapa. It is famous for its portrait sculptures over its pillars, including those of Ganesha, Kartikeya, Ravana, Ugra-Narasimha, Rama, Kali, Nataraja, Vishnu and other various forms of Shiva. There are also two portrait sculptures of chieftains belonging to the Nayaka period. 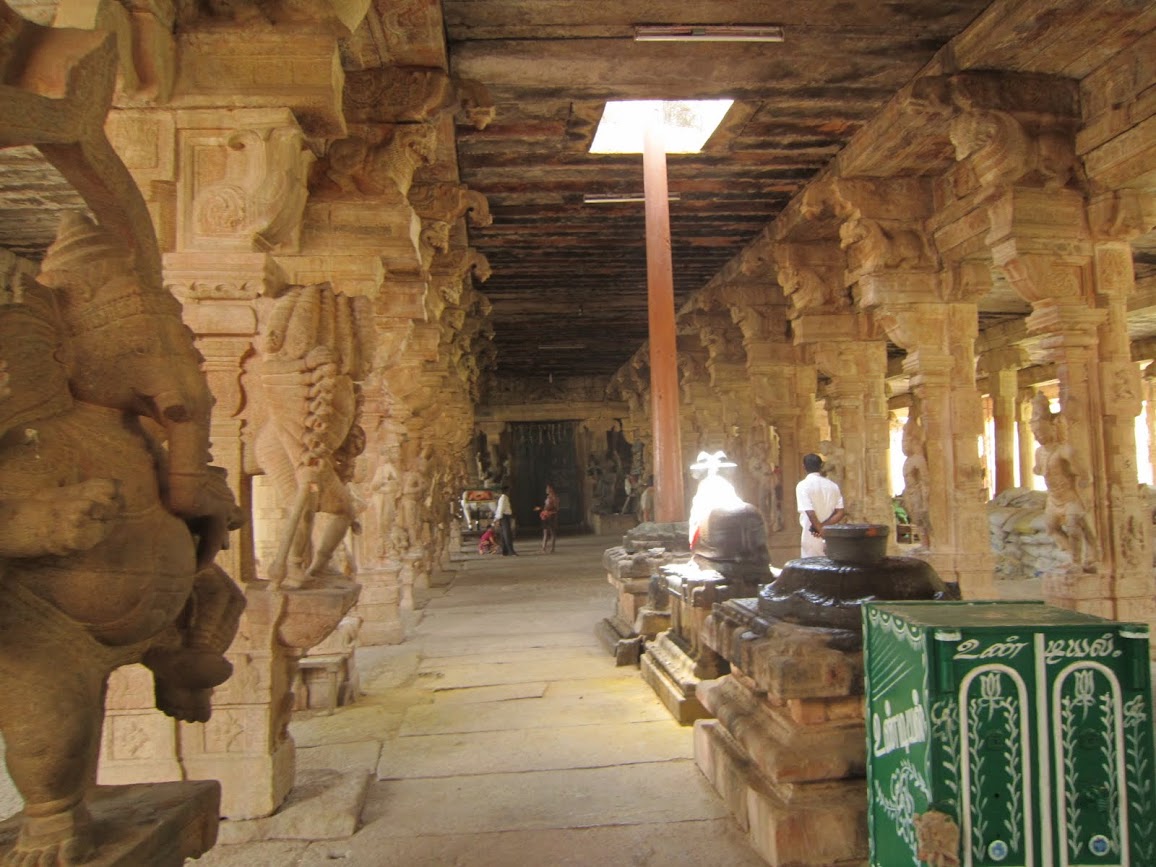 The next is sabha-mandapa entered through a door flanked by two huge dvarpalas. This mandapa is built in Pandya style and has exquisite bronze collection. There is also a stone image of Nataraja, about 6 feet high. In its bronze collection are found Chandikeshvara and Somaskanda.  The next is maha-mandapa where more bronze statues are kept, Ganesha, Subramanya, Subramanya as Shashta, Sapta-matrikas, Shiva as Bhikshatanamurti. There are two nayanars, Sambandar and Manikka-vachakar as well among the bronzes. A doorway flanked with two dvarpalas of Chola period leads in to a ardha-mandapa. The original structure of the ardha-mandapa with its attached garbha-grha was built during the Chola reign of tenth century CE, however it has been renovated at later periods. A covered pradakshina-path is provided around the main shrine. On its inner walls are installed Lingodbhavar, Sapta-matrikas, Jyestha, Subramanya, Gaja-Lakshmi and Saiva saints (nayanars). These images are from different periods. The niche of the main shrine house Dakshinamurti in the south, Vishnu in the west and Brahma in the north. The temple commanded quite an importance in later period. In 1730 Raja Vijaya Raghunatha Tondaiman was crowned here. In 1773, his military chiefs Lingappa and Raghunatha Servaikar, dug out tanks for public benefit. In 1872, Raja Ramachandra Tondaiman did a kumbhabhishekha of two of its shrines.

Subsidiary Shrines – In this temple complex, two more shrines are constructed, Akhilandesvari Amman Shrine and Soundara-nayaki Amman shrine. The first one is located in the pradakshina-path of the maha-mandapa of main temple. There is a rashi-mandapa in front of this shrine, where on the roof are carved twelve zodiac signs. Its entrance is topped with an exquisite makara-torana enclosing an image of Gaja-Lakshmi. Soundara-nayaki Amman shrine is located south of the cave temple and was built by danseuse of Kudumiyamalai. As per an inscription dated in thirteenth century CE and eleventh regnal year of the Pandya king Jatavarman Vira Pandya, a deva-dasi Umaiyalvi-Nachchi, referred to as the daughter of Durgai-aandar, bought some of the temple’s lands for 73,300 gold coins.  She also built Amman shrine dedicated to the goddess Tirukkamakkottathu Nachiar Arivudaya Malaiya-mangaiar or Soundara-Nayaki. This shrine is consisted of garbha-griha, ardha-mandapa and mukha-mandapa. Above the hill is located a Subramanya shrine which seems to be Pandya construction of thirteenth century CE.

Placement of this inscription among musical texts and treatise: