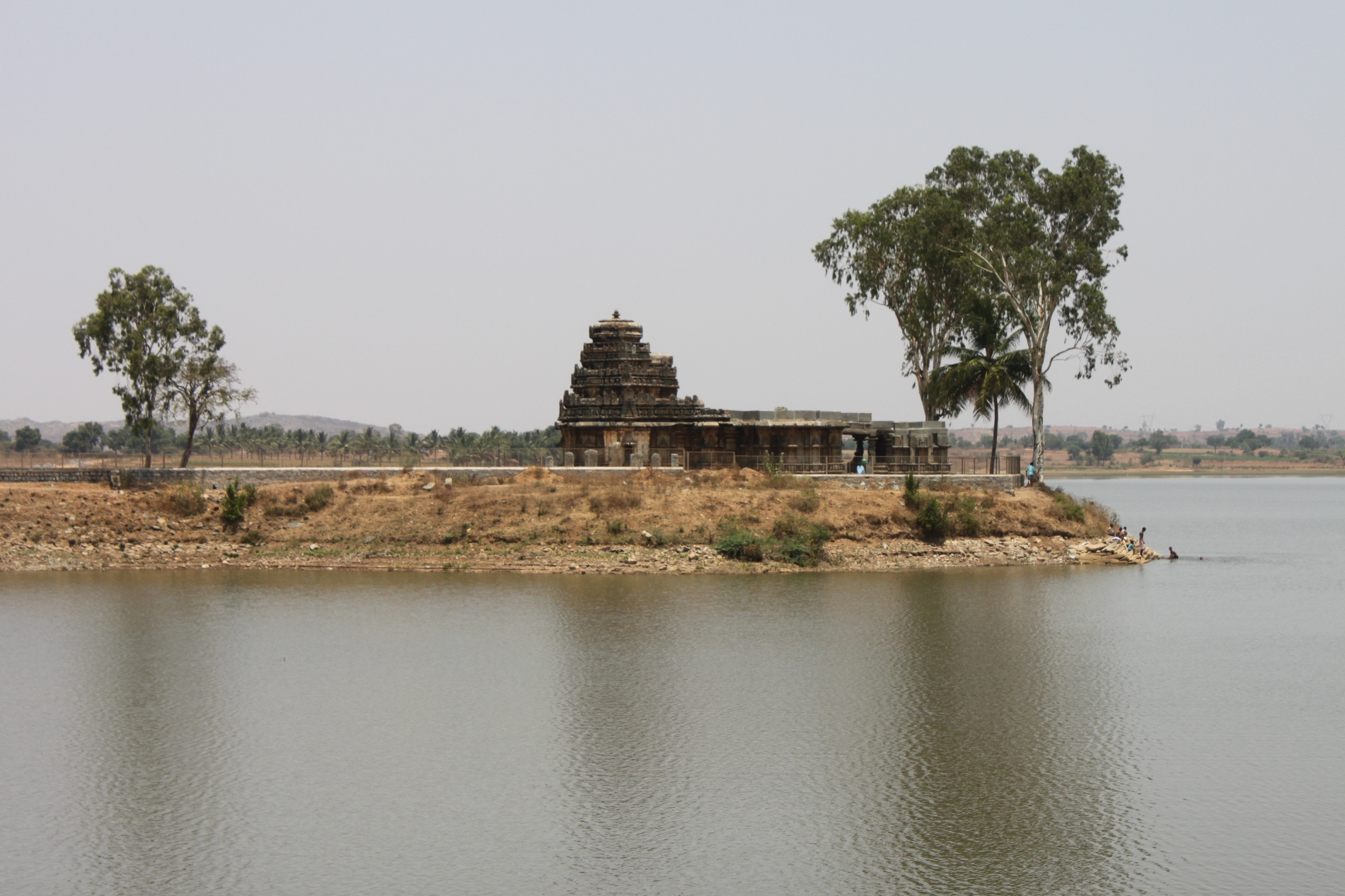 Introduction – Neelagunda is a village in Davanagere district of Karnataka. It has been referred as Nirgunda in its inscriptions. On its etymology, L D Barnett suggests that ‘nir’ stands for water and ‘gunda’ might refer to Kannada word ‘gundi’, standing for ‘low ground’. As the village lies at the bank of Tungabhadra and there exists remains of few ancient tanks hence the name Nirgunda seems appropriate for it.

The history of the village can be traced from eleventh century CE. An inscription, dated in 1087 CE, mentions that the Western Chalukya king Vikramaditya VI, granted Neelaguda with its two adjacent hamlets to three-hundred Brahmans who migrated from Dravidian lands. Neelagunda was then part of Vikkiga-70 territory. The same inscription also traces the Chalukya descent from their ancestors who were ruling in Ayodhya. It is indeed interesting to see that an agrahara is setup for the brahmans who migrated from Dravidian lands, or most probably might be the case that those were invited to live at this newly setup agrahara.

However, the above inscription is not the earliest one as there is another inscription which is dated in 1079 CE mentioning a land grant made by the brahmans of Neelagunda to a temple in Haleyahalu. Few years later, few more additional villages were also granted to the same Brahmans.

The village continued receiving the patronage from the Kalachuris and Hoysalas who came ruling after the Western Chalukyas. Interestingly, we do not find any inscription of the Vijayanagara period, perhaps the village had already lost its importance by that time and no royal patronage was provided.

.Monuments – There are three temples of interest in this village, Bheemeshvara, Lakshmi-Naryaana and Anantasayana. The best preserved is Bheemeshvara Temple and the other two are in various stages of preservation.

Bheemeshvara Temple – The east facing temple is consisted of a garbhagrha (sanctum), antarala (vestibule), a mandapa (hall) and two lateral shrines with their antaralas connecting to same common mandapa. Thus this forms a trikuta structure however the antarala of the lateral shrines is half the size of the antarala of the main shrine. The main cell faces east, while the lateral ones are in south and north. A small porch is attached to the eastern entrance of the mandapa. There is another shrine, opposite to the eastern entrance of the mandapa, not directly connected to the main structure however is axially aligned to the main shrine. All together, these four shrines form a chatur-kuta structure.

The mandapa is interesting with its feature of jali screens at the either side of the main entrance. The central ceiling of the mandapa is supported on four pillars and the roof has depiction of ashta-dikpalas. Inside the mandapa are four niches, two on either side of the anatarala doorway and one each at northern and southern end. Ganesha and Mahishasuramardini occupies the antarala side niches while the other two houses Sapta-matrikas and a yaksha or nidhi. A loose sculpture of Lakshmi-Narayana is placed in this mandapa, this image was brought from the nearby Lakshmi-Narayana temple.

The antarala doorway is very interesting and very beautifully carved. It has Gaja-Lakshmi on its lakata-bimba. Above this is a trimurti torana depicting the Hindu Trinity. Shiva is in middle, Brahma and Vishnu on either sides, all with their respective goddesses sitting on their laps. Shiva is also accompanied with Ganesha and Kumara. Shaiva dvarpalas are on the door jambs. The sanctum doorway is simple and it also has Gaja-Lakshmi on its lalata-bimba however it is not carved as a separate stone but within the doorway frame. Shaiva dvarpalas are also present at the sanctum door jambs.

The temple vimana has interspersed projections and recesses. The projections are decorated with shikharas of vesara style supported on pilasters while the recesses are decorated with shikharas in dravidian style supported on a single pilaster. There are three niches on the three sides of main vimana, housing a Shiva image in the western niche, ugra-Narasimha on the northern niche. Southern niche is at present has a loose sculpture however Rea mentioned that it houses a mutilated Bhairava during his visit.

The shikhara has many carved panels depicting Brahma, Shiva and various gods and goddesses. A curious Hoysala image of a man wearing a long robe is also found here. He is usually shown wearing a cap and holding a ring and a snake. Here, he is shown without cap however holding a ring but his snake seems to have broken off.

Foekema if of opinion that though the earliest inscription is from the Western Chalukya rule, however the temple seems to have undergone major reconstruction during the Hoysala period. The original temple would have been constructed around 1100 CE but the current structure can be dated between 1200-1250 CE.

How to Reach – Neelagunda is located in Davanagere district, about 10 km from Harapanahalli and 40 km from Davanagere which is the nearest railway station.