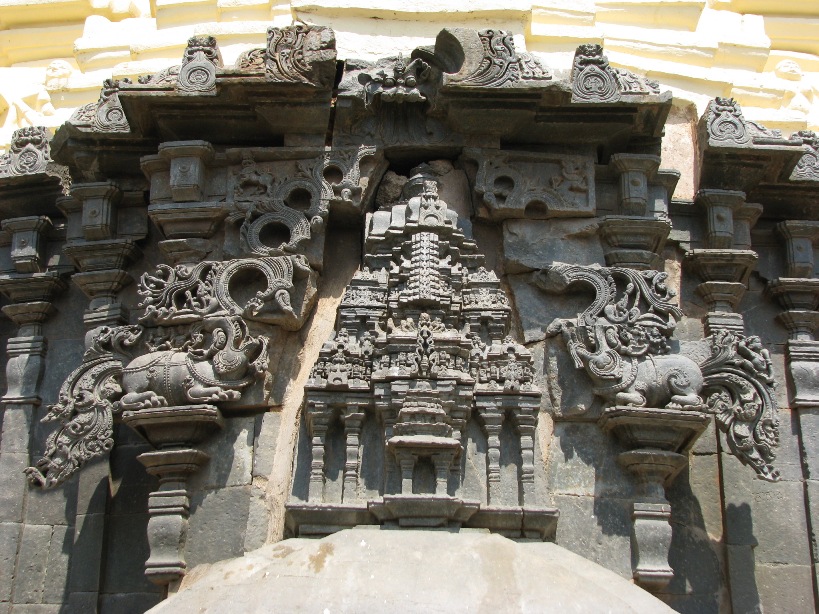 Introduction – Kuruvathi, also referred as Kuruvatti, is a village in Bellary district of Karnataka. It is located on the bank of Tungabhadra river. the village is famous for its Mallikarjuna Temple and annual cattle trade fair held during February-March every year.

The earliest antiquity of the town can be traced back to the Western Chalukya rulers whose inscriptions are found in and around the village. The earliest inscription is dated 1087 CE which falls under the reign of the Chalukya king Vikramaditya VI.

During the Western Chalukya period, the town was made famous by king Someshvara I. An inscription an Balligavi mentions that on 29th March 1068 CE, king Someshvara I performed the rites of supreme yoga and in the Tungabhadra at Kuruvatti, the master of the world Ahvamalla ascended to heaven. A reference of this is also found in the Vikramankadeva-charita of Bilhana, which mentions that the king, being attacked by a malignant fever for which no remedies were found to be of any avail, went to Tungabhadra, and there, after bathing and meditating on Shiva, walked into the river until its waters reached his throat, and so ended his own life.

This event would have put Kuruvatti on the map of the religious, pious sites during the Western Chalukya period. It would not be far fetched thought if we state that the Mallikarjuna Temple was built as a memorial to commemorate this event by the later descendants of the king Someshvara I, either by Someshvara II or by Vikramaditya VI. An evidence in this support comes from the inscriptions of this place where the lord of Mallikarjuna temple is referred as Ahavamalleshvara, after king Ahvamalla (Someshvara I).

The village gained more importance when it came under the Hoysalas. The credit of this goes to saint Lokabharana who was the raja-guru (royal priest) of king Ballala II. Lokabharana made Kuruvatti his abode and thus the town was frequented by the royals and nobles. Many grants were made during that period, making the village rich and prosperous. The chief queen of Ballala II, Padumaladevi, also made a grant at Kuruvatti to god Ahavamalleshvara. The village also started to be referred as Dakshina-Varanasi during this period.

Monuments – The only monument of interest here is the Mallikarjuna Temple.

Mallikarjuna Temple – This east facing temple is consisted of a garbha-griha (sanctum), an antarala (vestibule), and a mandapa (hall) with three entrances. In front of the temple is another modern mandapa housing Nandi.  The temple vimana is noticeable for its tall walls which accentuate its height though it does not have very high shikhara.

The mandapa has porches attached to its lateral entrances, on south and north. The eastern entrance is not provided with a porch and the reason would be that it was fronted by another mandapa to house Nandi. This mandapa is now a modern structure however in the past there would have been a mandapa coterminous with the temple. The eastern doorway of the main mandapa is most elaborate among others and the reason is the exquisite bracket figures adoring the entrance, three such figures are still in situ as others had been carried away to various British Museums. The door has six rows (shakhas) carried till top and merging towards the lalata-bimba. The lalata-bimba has Gaja-Lakshmi, being bathed by six elephants.

About these bracket figures, James Fergusson writes ‘All the details are sharp and the carving so good that even at Halebid it would be difficult to prove out any individual piece showing more complete mastery over the material than the brackets representing female figures with encircling wraths on the fronts and inner sides of the capitals at the east entrance’.

Because of its three entrance, the interior of the mandapa is quite lighted. Its central ceiling is supported on four pillars, bases of whihc are carved exquisitely. each pillar has a square base, all the four faces of which is carved with an image housed inside a Nagara shrine. In those image, we find three times Shiva, three times Vishnu, two times Brahma, three times Surya, Bhairavi, Kali, Ganesha, Sarasvati and a saint.

The antarala does not have a doorway but a freestanding torana supported on two pillars. The niches formed by loops emerging from makaras has Shiva in middle and Brahma and Vishnu on his either sides. A similar torana is also found in Dodda-basappa temple at Dambal and Kalleshvara temple at Bagali. Few loose sculptures are kept in this antarala. Two images of devotees, one showing a couple and one showing two ladies, an image of Bhairava and Shiva.

The garbha-grha is a simple square structure housing a Shivalinga inside. Its entrance is elaborately carved in five shakhas (rows) with shaiva dvarpala on the jambs.

The outside vimana has three niches in three directions. Image of the southern niche is now damaged however it was largely intact when Alexander Rea visited the site in 1896. From his reproduced picture, it seems to represent Bhairava. Western niche also has a damaged image however from its remains it is clear that it depicts dancing Shiva. Northern niche has Ugra-Narasimha. The projections and recesses in the wall are decorated with Dravida shrines, projections have Dravida shrine supported on two pilasters whereas the recesses have small Dravida shrine over a single pilaster but with a torana above it.

There are some interesting loose sculptures kept inside the mandapa. In the southern porch, an image is placed which Patil identifies with the Western Chalukya king Someshvara I. This image shows a royal person sitting with two females on either side, probably his wives, accompanied with two female attendants. Though the image carries no inscription, however knowing that Someshvara ended his life at Kuruvatti, it would not be a far fetched idea to identify this person with the said king. Another image is of Surya with a serpent canopy above his head. Also found is an image of Ganesha.

The date of the temple cannot be decided convincingly due to missing foundation inscriptions. However, based upon its existing inscriptions, it can be safely said that this temple would have been constructed after the death of the Western Chalukya king Someshvara I which took place in 1068 CE. Gerard Foekema puts the temple between 1070 & 1090 CE.

How to Reach – Kuruvathi is situated in Bellary district and located about 10 km from Halavagal, 36 km from Ranebennur, 35 km from Davanagere and 30 km from Harihar. The village is tagged on Google maps however the temple is not tagged, however once you reach the village you will not find difficulties locating the temple.