Skip to content
Home Between 1 and 500 CE Nachna – Imprints of the Guptas
The village of Nachna-Kuthara was brought to notice by Alexander Cunningham who visited this site in 1883-84.1 After getting the names of the nearby villages, he named the site as Nachna-Kuthara. However, the village is now known as Kachhgawan (कछगवां) situated in the Panna district of Madhya Pradesh. In 1919, R D Banerji during his tour of central India, in the capacity of the Superintendent, Archaeological Survey of India, Western Circle, visited the village and its temples. He mentions his interest was drawn to the rock-shaped Gupta temple as described by Mr. O C Ganguly and after explorations, he found the remains of four more temples in the jungle.2
The early political history of the village can be derived from the general history of central India. This region would have been under the Guptas during the 4th-5th century CE. However, this was not ruled directly by the Gupta rulers but by their feudatories, the Uchchhakalpas. An inscription found in the tank of the village, Nachna-ki-talai inscription, mentions a certain Vyaghraraja as a feudatory under the Vakataka king Prithivisena II (470-490 CE).3 Dubreuil4 suggests that Vyaghraraja of the inscription might be the Uchchhakalpa prince of the same name as mentioned in the various Uchchhakalpa inscriptions of Khoh and Karitalai area. The Uchchhakalpas ruled from their capital city of Unchehara located about 50 km far. Therefore, it might be very probable that Kachhgawan (Nachna-Kuthara) was ruled by the Uchchhakalpas. If accepted then it can be said that the allegiance of the Uchchhakalpas shifted from the Vakatakas to the Guptas during the later period of their rule as the successors of Vyaghra dated their inscriptions in the Gupta era and . Taking the stock of the architectural wealth into consideration, Joanna Williams suggests that the village would have held an important position as a cultural and trade center, and perhaps acted as the capital of the Uchchhakalpas.5 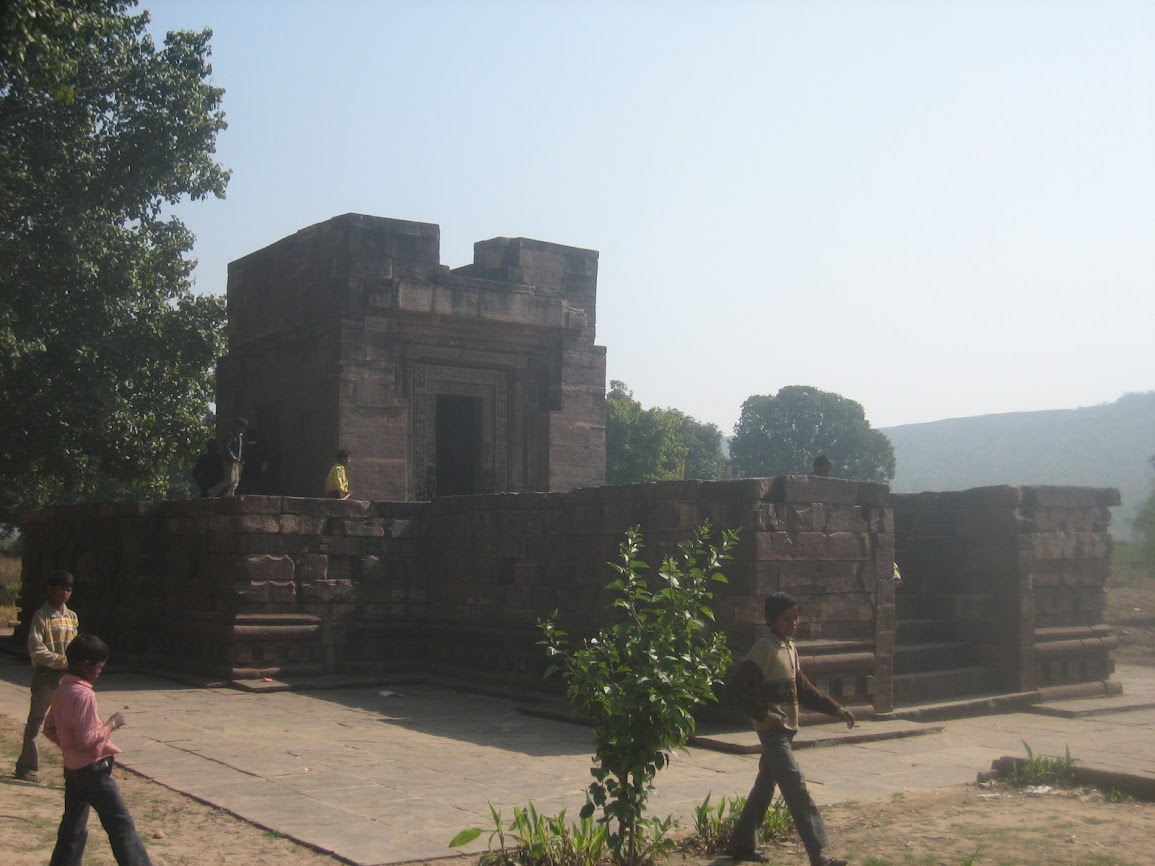 Parvati Temple – The temple faces west and is dedicated to Shiva. It is constructed on a high terrace and composed of a garbha-grha, a pradakshina-path (circum-ambulatory) and a mukha-mandapa. The garbha-grha is a square of 8 feet 10 inches and the pradakshina-path is 5 feet wide around the garbha-grha.6  Meister explains that the major metaphors in the minds of Hindu temple architects were those of the body of the temple as mountain and the sanctum as cave.7 This temple falls under the rare category of style and design simulating a mountainous environs with a garbha-grha in the center. While the wall portion till the adhishthana (vedibandha) is constructed  using dressed masonry, the portion above it is constructed using irregular shape stones looking very similar to natural rock-formations. Grottos, caves and niches are interspersed around the walls carrying images of ganas (dwarves), lions, yakshas, warriors, boars, peacocks, monkeys, deer, and women. Many of the panels embedded into these cavities have been removed to the Tulsi Sangrahalaya (museum), Ramban (Satna) and a few are still in the sculpture shed at the site. Meister tells that the idea here was to represent Kailasa mountain, the abode of Shiva. A parallel contemporary representation of the mountainous region is found in a 4th-6th century CE Krishna-Govardhanadhari panel, now in the Bharat Kala Bhavan, Varanasi. On the basis of a comparative analysis of its architectural style and sculpture, the temple has been dated to the last quarter of the fifth century CE.
The garbha-grha is a two story structure. Over the regular square garbha-grha of the ground floor, an extra cell is raised on the first floor. However, the purpose of this upper cell is not very clear as there were no means provided to ascend to that level. Therefore, whether it was just a decoration element or had a religious purpose is not certain. The garbha-grha on the ground floor has plain walls with windows on its each lateral wall. The windows frames have niches carrying ganas in various postures. An important two-armed image of Ganesha is found in the center of one window.  Similar windows were embedded in the walls of the pradakshina-path and a few were in situ among the debris. Two of these windows are now embedded into the Chaturmukha Mahadeva Temple nearby. The garbha-grha doorway composed four shakhas (bands). Ganga and Yamuna are present at the base of the door-jambs. With them are present Shaiva dvarapalas accompanied with Trishula-ayudhapurushas. In the center of the lintel is Shiva-Vinadhara seated in maharaja-lilasana with Parvati. Two windows, having nagas motifs, that were once embedded into the front side walls of the temple are now embedded into the nearby Chaturmukha Mahadeva Temple, on either side of its garbha-grha doorway. Similarly, the side windows having vyalas with riders that were once adorning this temple are now embedded into the Chaturmukha Mahadeva Temple.
The temple had some of the earliest lithic Ramayana panels, total six in number. From the surviving panels, the story depicted is the forest dwelling of Rama, Sita’s abduction by Ravana, and the last panel shows Hanumana being brought to the court of Ravana.  The first panel in sequence depicts the scene of Sita’s dialogue with Lakshmana after Rama left for the godel deer. When the golden deer, impersonating Rama, cried for help, Lakshmana was not ready to leave Sita to go in search of Rama. The middle male figure with his hands over his ears represents Lakshmana when he closed his ears when Sita rebuked him for not helping his brother. The rightmost male figure, shown in posture of moving out, is again Lakshmana who unwillingly left Sita in search of Rama. The panel showing Ravana taking alms from Sita is of great importance for its exquisite style and design. While Williams says that these panel might not have come from the rocky-shape base of the temple, Seema Bawa8 opines that these were part of some lost Vaishnava temple. 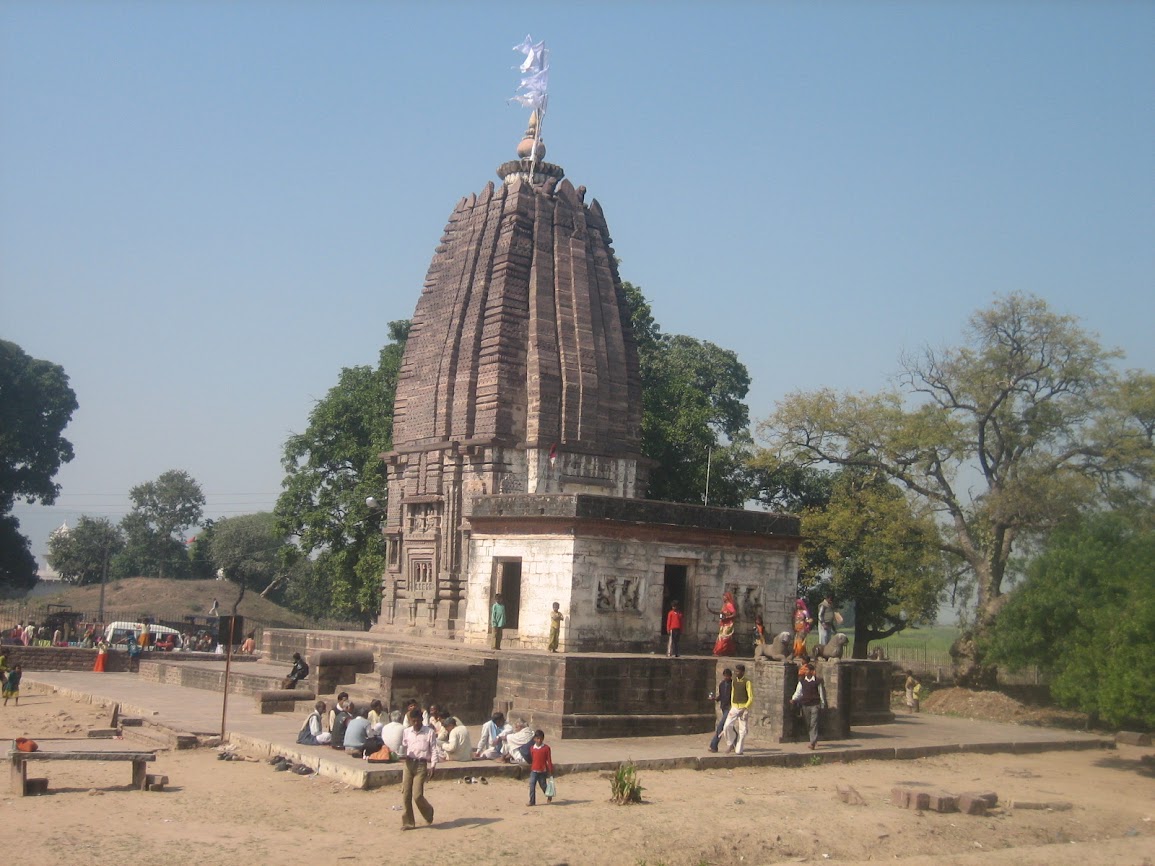 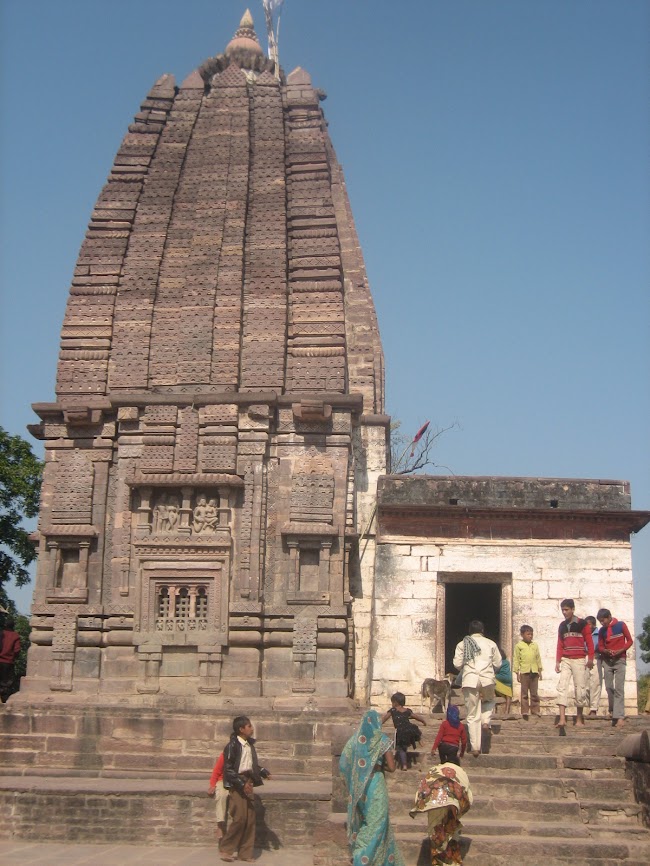 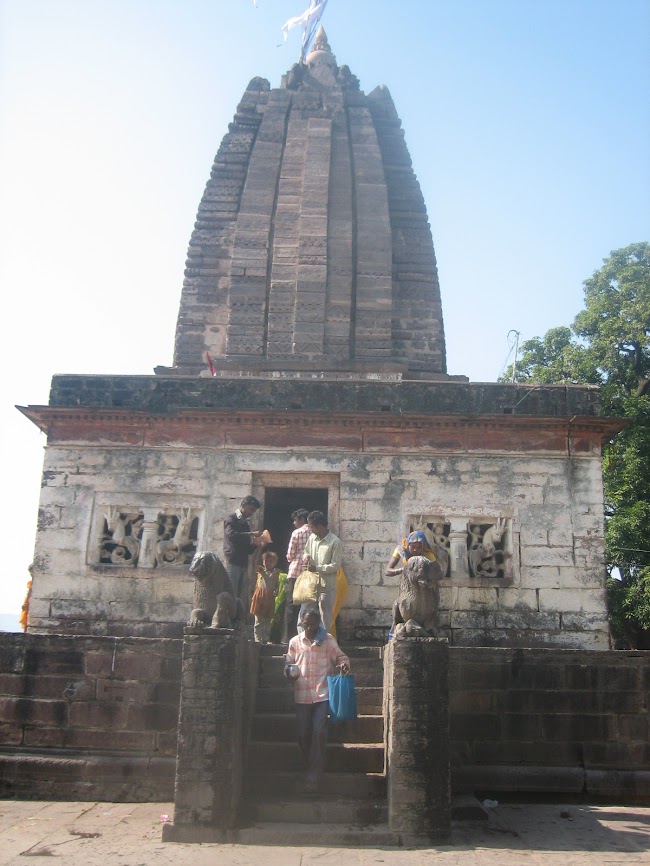 Chaturmukha Mahadeva (Chaumukhnath) Temple – This 9th century CE east facing temple is presently in worship. Like the Parvati Temple, this temple is also constructed over a jagati (platform). It is composed of a garbha-grha, an antarala and a modern mandapa. The modern mandapa of the temple has been reconstructed sometime in 1918 utilizing decorative material from the nearby Parvati Temple. From the construction technique and utilized material, it is very evident that the present structure is not a homogenous but comprised of materials coming from different eras, at least two distinct periods. R D Trivedi rightly says that at the time of construction of the temple, the architectural material of the earlier period was utilized in the formation of the bhadra-niches and the doorway with the flanking pillars.9 The temple is tri-ratha in plan till its jangha, the shikhara above is in pancha-ratha style.  monuments dates from Pratihara period. 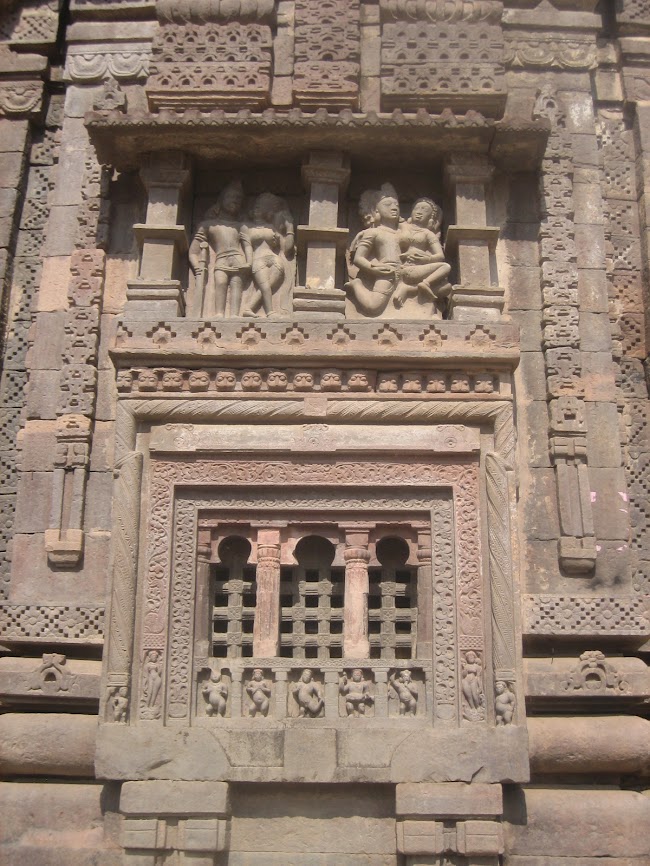 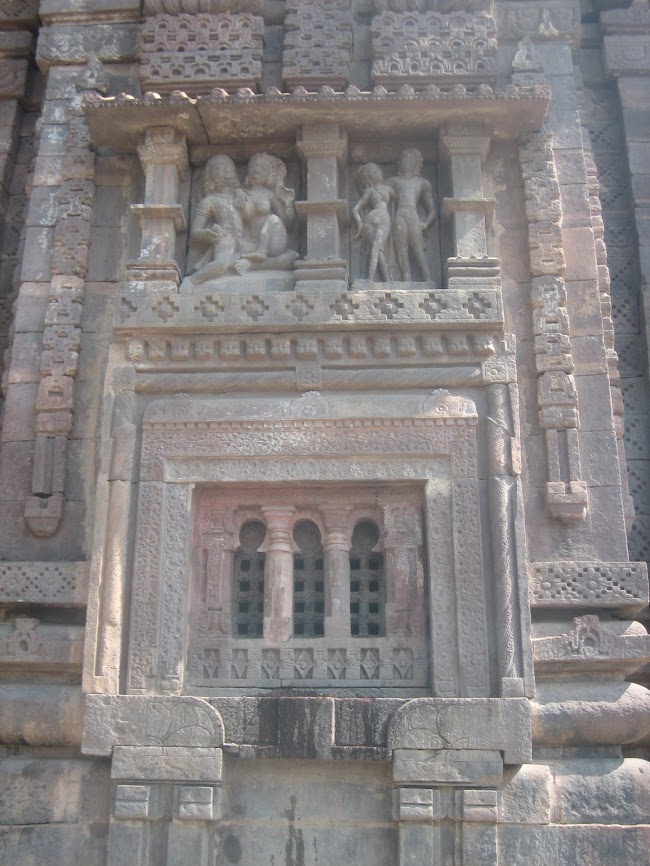 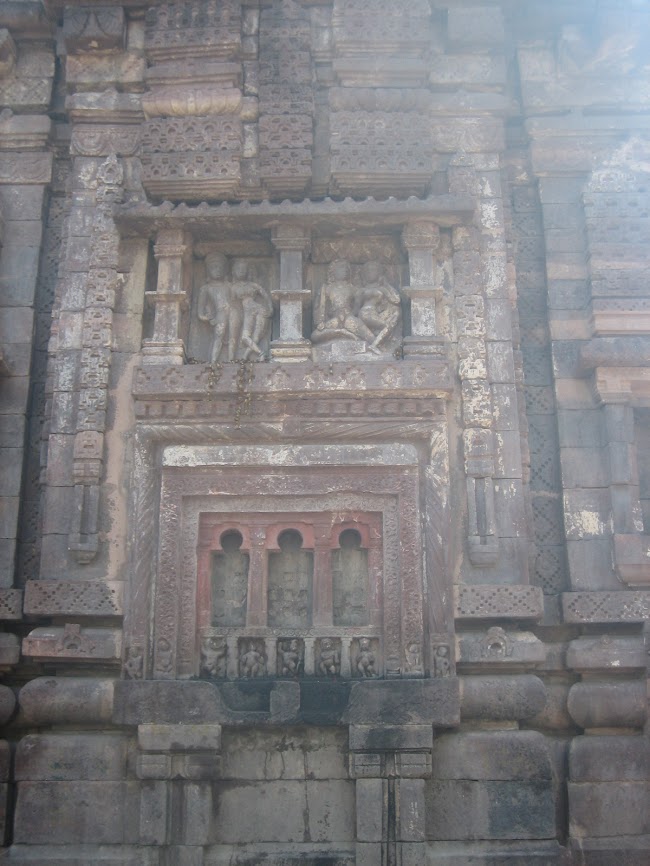 The bhadra-niches has perforated windows with two bands forming three spaces. Below these bands are figures of ganas, five in number, in various postures. The window in the west does not have figures of ganas but has jewel design. Above the windows are two niches separated by pilasters. In all these niches are present vidyadhara couples, flying or standing. From the style and design, these windows appear to be part of the Parvati temple. The karna-niches (corner niches) were having ashta-dikpalas however, only two have survived, Agni in the south and Kubera in the north. 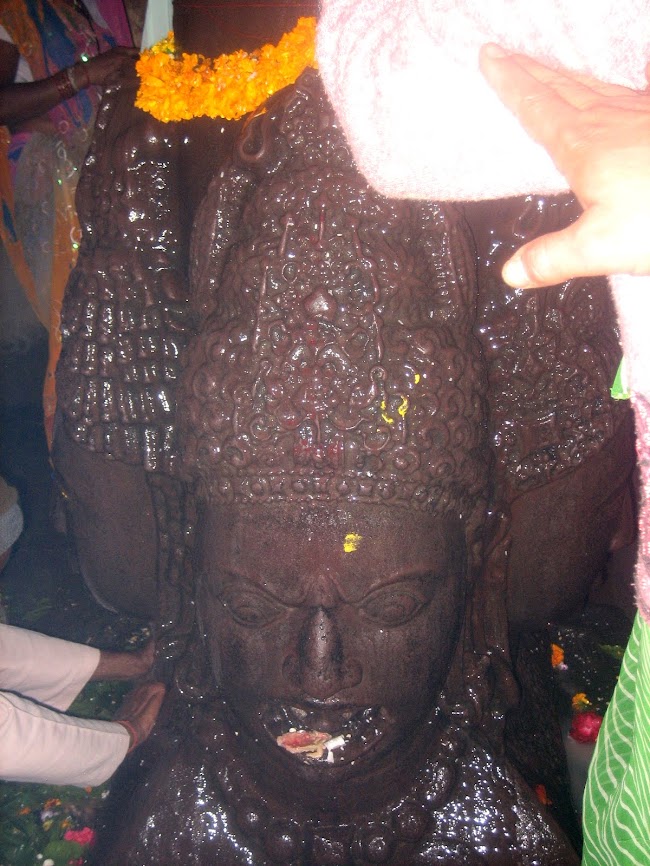 Telia (Taliya) Math (Kumra Math) – This ruined structure is located about 500 meters from the Parvati Temple complex. It is a fifteenth century CE structure utilizing the material, specially the doorways, of an earlier structure, probably of the fifth-sixth century CE. The present structure has four entrances adorned with doorways on each entrance. Walter Spink10 suggests that these four doorways were part of an earlier four-sided shrine, however, Joanna Williams11 differs.

The southern doorway is the best preserved and provides details of its origins. On the terminals of its lintel are present two avataras of Vishnu. Narasimha is shown grasping demon Hiranyakashipu, the latter is on his feet suggesting his submission to the former. This posture is very different to the usual iconography where Narasimha is shown tearing the demon and therefore suggests the beginning of formalization of icon. Varaha on the other terminal is shown holding Bhu-devi. The figure of Bhu-devi is almost the same size as that of Varaha, and this again is differs from the usual iconography of the icon where Bhu-devi is of very small size in comparison of the Varaha. The uppermost band of the lintel is decorated with a series of 29 human heads, two different specimens placed in alternate order.

The eastern doorway has only the door-jambs of the original and its lintel has been replaced with a plain beam. Decoration over two bands of the doorway are still intact, one band carries rosette molding and another carry floral decoration. The floral moldings are issuing from a vase (purna-ghata) held above head over a gana.

The northern doorway is very different from the last two discussed doorways as it is bereft of original material. The present lintel over the door jambs is in fact a window (jali) of some lost temple that was lying nearby and utilized here. The door pillars were also be part of that original temple however these would have been the pillars of a mandapa and now utilized as doorway pillars. The western doorway has preserved better details of its original structure. At the base of the door jambs are Ganga and Yamuna over their respective mounts. Spink12 mentions the nearby fallen lintel belonging to this doorway having an image of Surya over its lalata-bimba.

Rupni Temple – The local legend says that Udal’s lover used to visit this temple to worship Shiva and thus the name Rupni’s temple. The present structure is, of course, a later period construction however its doorway is certainly a work of sixth-century CE. The river goddesses, Ganga and Yamuna, are present at the base of the door-jambs.  Gaja-Lakshmi is present over the lalata-bimba however it would be tough to say whether the original temple would have been dedicated to Vishnu or Shiva as Gaja-Lakshmi is found in both types of temples. Panels over the door bands have niches carrying mithuna-couples. Williams13 dates the doorway to 530-540 CE.

Lakhurabagh – As per a local legend, the place was named after a king planting one lakh mango trees and fed one lakh brahmins. This led to a belief that the place had hidden riches under its soil making the locals dig and desecrate the ancient ruins it once had. Remains of these ancient riches, mostly pillars and columns, are now embedded into modern or in later medieval dipladidated structures.

Jain Images – Nachna was once an important Jain center as evident from the volume of sculptural remains obtained in the village. Rupni Temple would once be a Jain temple as suggested by Jain images inside the shrine. In many Gupta period sites, it is witnessed that Hindu and Jain cultures co-existed and their temples were erected near vicinities.

Inscriptions: Two important inscriptions are found from the village and its nearby Ganj village. 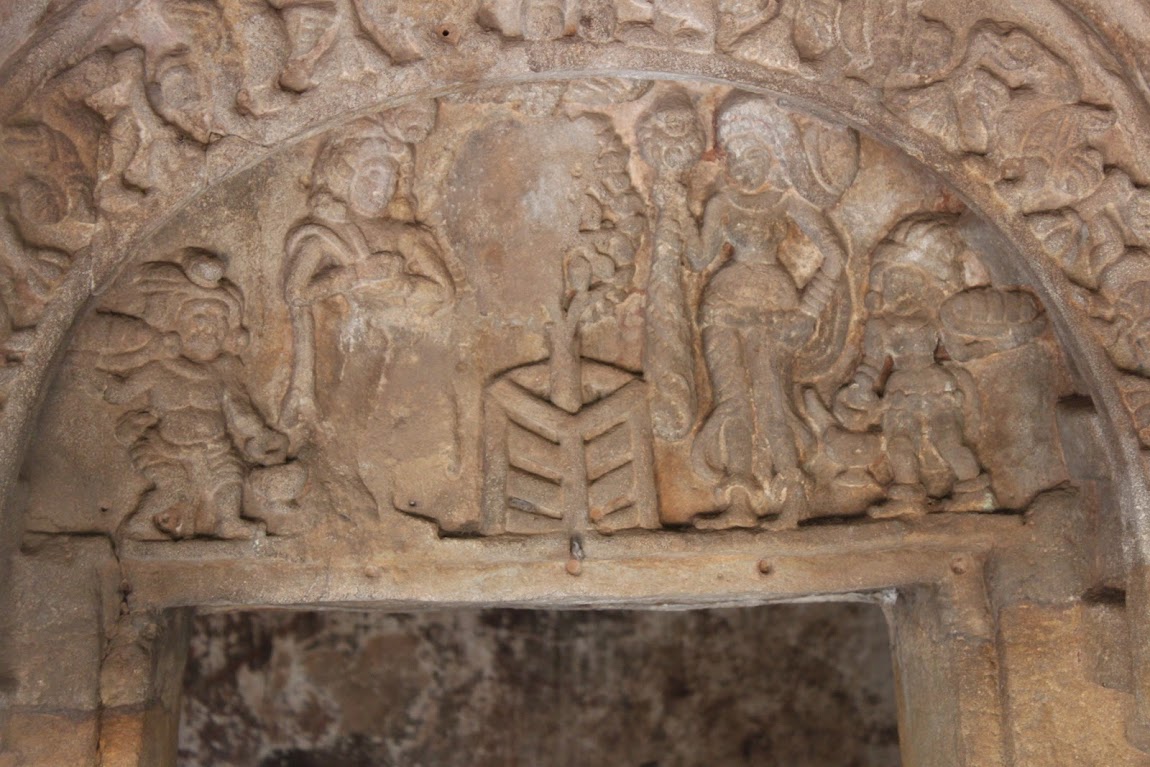 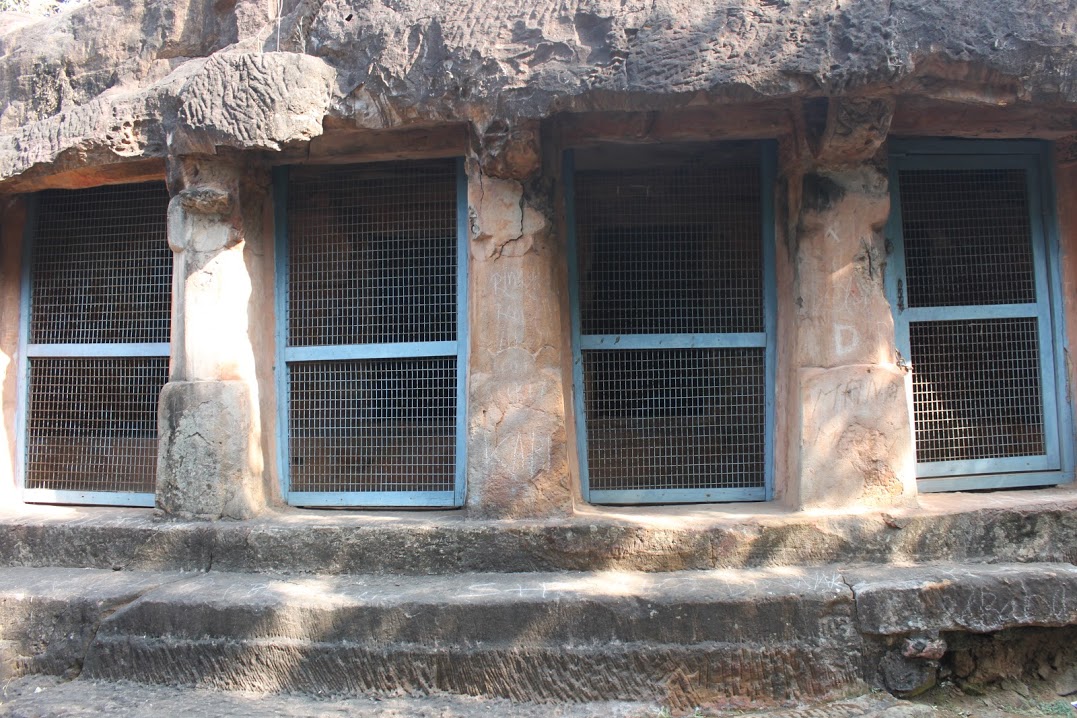 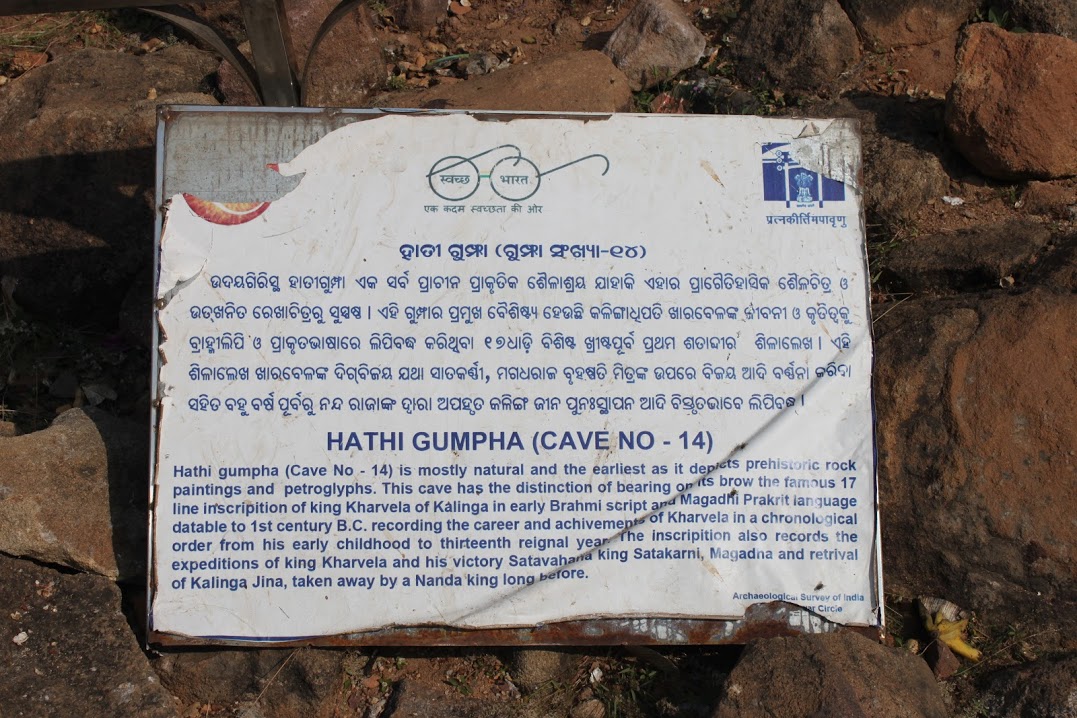 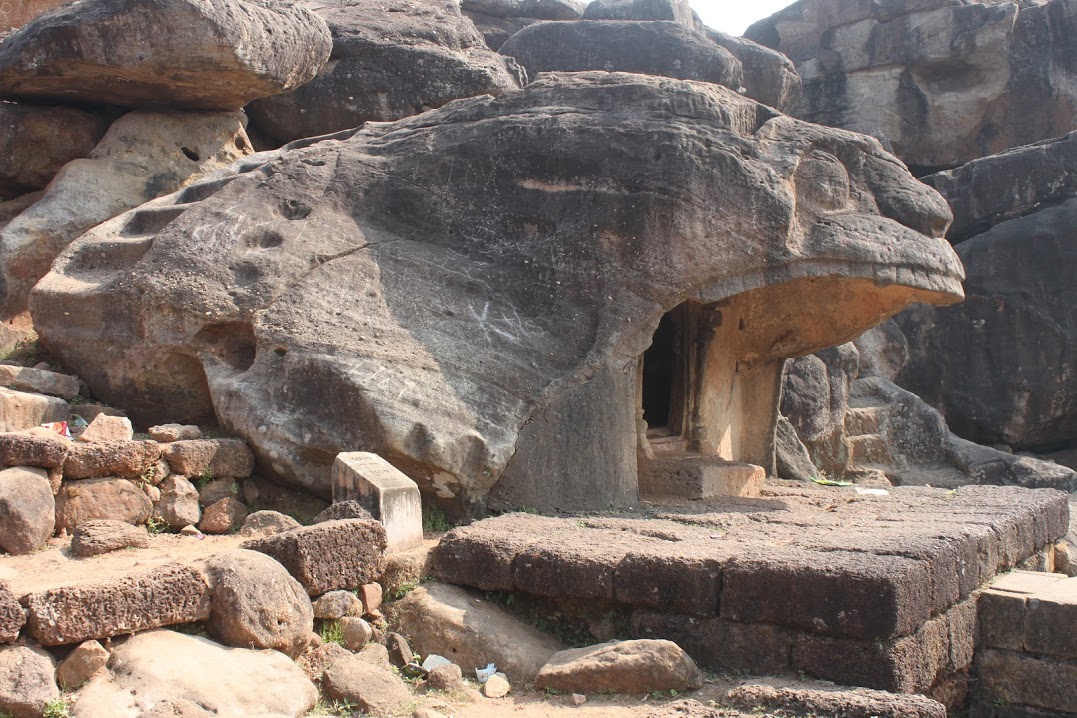