Introduction – Nemawar, Dewas district, is a small town located about 128 km from Indore. It was known as Nabhapur in Puranas. As per Puranas, Rishi Jamadagni, father of Parashuram, meditated here. Not much as such is known about the antiquity of this place. Nemawar was under Parmars during 11th-12th centuries. After Parmars, it went into the hands of Maratha, Sindhia, Holkar and lastly to the Mughals.

Monuments – Nemawar is a prominent Jain teerth sthala, Jain pilgrimage center. However, this town is better known for its sky reaching spire of Shiva temple. 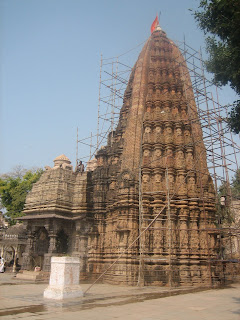 1. Siddheshvara Temple (early 12th century) – Siddheshvara temple is dedicated to Shiva, known as Siddinath here. This is the loftiest temple of Parmar dynasty. It is a west facing rather than usual east facing temples. The mandapa of the temple has three entrances, on north, west and south. West entrance is flanked with Shiva images as guardians, north and south entrances have goddesses as guardians. The temple is an example of bhumija architecture style, similar to Udayeshvara temple at Udayapur. The tower here is heightened to the extreme level consisting of nine tiers of miniature towered elements either side of the central tapering bands of mesh-like ornament. These tiers are clearly articulated, lending an almost rounded quality to the towered profile. Large arched niches are positioned at the base of the central bands. The roof over mandapa seems like a recent addition. The external walls are adorned with numerous images of gods and goddesses however there is a feeling of monotony as many of the images are carved in same posture and style. Either the sculptors were out of ideas or they were not ready to try out new things. The niches around the tower are small as compared to the image installed within these. The architect tried to accommodate as many as image possible in the given space which in turn disturbed the overall appearance of the temple. The Nandi pavilion, in front of west entrance of mandapa, is a later addition. It’s domical roof shows the Mughal influence clearly.

Food and Accommodation – It is a small town and has no good option for stay. You can get simple snacks and fruits from shops near the bus stand. Indore would be a right choice to stay and visit Nemawar as a day-trip.

How to Reach – Nemawar is connected to Indore via road. You can get the bus from Gangawal bus stand of Indore. It takes about 4.5 hours, so it’s good to take early morning bus. The nearest rail-head and airport is Indore.