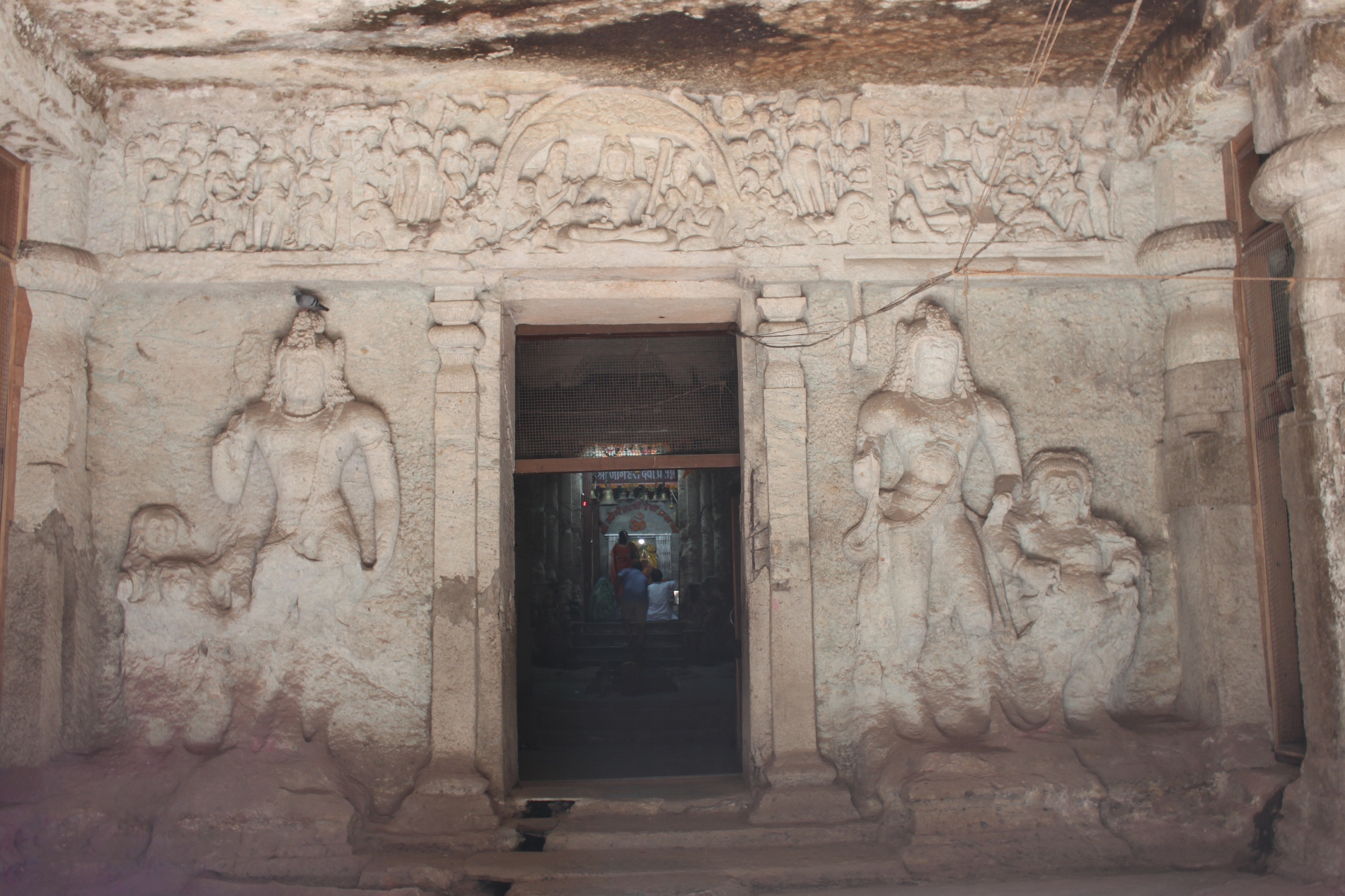 Jogeshvari caves are located amongst the residential blocks of Jogeshvari region of Mumbai. These caves were also referred as Amboli caves by J M Campbell & J Burgess because the caves were lying within the limits of Amboli village. Because of its present location, these caves are under the constant threat of encroachment. However, the caves have been turned into live temples which on one side is good that it saves from further encroachment however on another side it further damages the caves. However I think there is no other alternative to the government agencies.

William Hunter (1784, Archaeologica vol VII) – He referred the caves as Ambola caves. He mentions that the main entrance was from west where an arch was formed due to a fallen tree. From this entrance, there is an open passage of 30 feet long leading to a high entrance.  Most of the sculptures he saw were very much defaced already. He mentioned that the main shrine inside the cave was under worship.

Hector Macneil (1783, Archaeologica vol VIII) – Macneil mentioned that the entrance to the cave of Ambola is neither dignified with the objects that present themselves on your first approach to the caves of Cannara, nor beautified by the romantic scenes that surround them. The main cave is perfect square of 90 feet, adorned with twenty pillars which support the roof 15 feet from the walls, and consequently form another square of 25 feet within colonnade.

He described many sculptures of the cave, however as he did not have any hint of Hindu iconography hence it was not much useful except his eye-witness account. About the Shiva-Parvati dice game sculpture, he writes that the sculptor indeed seems to have excelled himself in the execution of this which in ease, attitude and symmetry would not perhaps disgrace the genius of Michael Angelo. The large Ganesha image in the eastern extreme cave here was still in worship during his visit. He referred the image as the image of Swami worshiped by Hindus and was smeared over in red color.

On leaving the cave, Macneil writes, ‘Time, or perhaps some bed quality in stone, has rendered it now but the skeleton of its former grandeur; and though we view with astonishment such stupendous monuments of antiquity, we still retire with a sigh, impress with the folly of human pride, and the instability of all its boasted greatness’.

George Valentia (1802 , Voyage and Travels to India and Ceylon) – Valentia in company of Mr. Salt visited this cave which Anquetil du Perron has described as Djegueseri. He mentions that most of the sculptures were much decayed and had very unpleasant appearance. The central shrine inside the main hall had a lingam which suggests that the cave was dedicated to Mahadeo.

Henry Salt (1806, The Transactions of the Literary Society of Bombay) – Salt’s paper included the plan and drawings furnished by Major Atkins of the Bombay establishment.  He referred the caves as Jogheyseer near the village of Ambollee. His approach was via a Banyan tree which formed a natural arch. This at present is the main approach to the cave temple. He mentions that though the main entrance was on the west side but the in the past the eastern entrance would have been used as the main entrance. He tells that the figures in the chambers of the western entrance were almost decayed by that time.

After Salt, the caves were mentioned in the Bombay Gazetteer compiled by J M Campbell. The description was mostly drawn from Salt’s narrative but improved with eye-witness account of Campbell. Walter Spink visited this cave in 1960s and recalls an unofficial dump just above the cave and squatters livings in niches insides. He tells that this cave is the transitional state which connects the Buddhist caves of Ajanta to the Hindu caves of Elephanta. A Jamkhedkar mentions that this cave was a prototype where the artists formulated the ideas as to how they should express their ideas and they get perfected at Elephanta.

B N Chaudhury (1982, Buddhist Centers in Ancient India) – Chaudhury very briefly mentioned this site in the list of Buddhist centers. He tells that this excavation was carried out Buddhists and later taken over by Brahmins.

A PIL filed in April, 2005 in the Mumbai High Court resulted in formation of a committee to oversee the future of this cave. The committee was chaired by the then ASI director, G S Narasimhan. This committee did commendable job, as evident from the present condition and conservation of this cave temple.

This cave is among the largest Hindu caves of India, competing against the main cave of Elephanta and Dhumar Lena cave of Ellora. One striking difference which is found here against the other two caves, is that the shrine inside the hall is situated exactly in the center instead of on offset from the center.

The main entrance at present if from west. A long passage has been cut out of solid rock to make this grand entrance. J M Campbell gave the measurement of this passage as 8 feet wide and 50 feet long. At the end of the passage, six steps descends into a small chamber, measuring 20 feet by 18 feet and 20 feet high, which has a door for further entry into the main cave.

On either side of this door are carved two huge dvarpalas. The condition of both is much deteriorated, which probably is the effect of time and weather. On the lateral sides of this portico are provided chambers supported on two pillars and two pilasters. In one of the chamber, there is a stupa like structure however this cannot be true as the cave is purely Hindu in nature.

J M Campbell mentions that these two chambers were decorated with sculptures however these were much defaced during his time of visit. He tells us that in one chamber Shiva was seated in Buddha like attitude and in another chamber Shiva was shown dancing in tandava mudra.

Entering through the above door takes you into a huge hall supported on 20 pillars, measurements as per Dr Qureshi are 29.5 m by 28.5 m, J M Campbell 90 feet square and 10 feet high, J Burgess 92 feet square. This huge hall can be compared with similar dimension halls of Elephanta and Ellora. It measures 250 feet east to west excluding the rock cut passages, including these it measures 320 feet. From west to south it measures 200 feet.

There is a central shrine constructed over a raised platform in middle of this hall. This shrine measures 19 m square and is supported over twenty pillars. Except for these pillars, there are no pillars to support the ceiling of this huge hall. J Burgess tells that the shrine is 24 feet square, he probably excluded the circumlocutory path attached to the shrine in his measurements.

The central shrine is dedicated to Goddess Jogeshvari. It is open on its four directions and allowed a passage all across its sides. Over the lintel of one of the door, an image of Lakulisa is carved. Presence of Lakulisa at few places in the cave has been a topic of controversy on the dating of the cave. As per a study Lakulisa movement was established by start of this era and he started appearing in images by middle of fourth century CE.

Dr Dulari Qureshi mentions that the Kalachuris of Mahishmati who were the followed of Pashupata cult, hence the cave can be assigned to them dating it to latter half of sixth century CE. However these Kalachuris did not show any image of Lakulisha in their other temples hence this religious association of the cave to the Kalachuris is not very concrete. The cave has been dated to between sixth and eighth century CE invariably.

J M Campbell dates the caves to eighth century CE. Bhagvanlal Indraji tells that Jogeshvari and Elephanta caves are contemporary however he puts Jogeshvari before Elephanta. J Burgess also agree with Bhagvanlal on contemporaneity of these two caves however he puts Jogeshvari after Elephanta. J M Campbell mentions a much worn Sanskrit inscription on the parapet at the east end of the outer verandah, characters pointing to eighth century CE.

There is another entrance into this hall, in the eastern side. This might be the main entrance in the bygone days however nothing can be said with certainty. At present this entrance ends at a residential site. On the external façade of this entrance, over the lintel of the door, are few exquisite carvings. In the middle is shown Lakulisha with his four disciples, Kushika, Garga, Mitra and Kaurushya. On left of it is shown Kalyanasundara murti, Shiva marrying Parvati in the presence of Brahma, officiating as a priest, and Vishnu, and is also seen severed head of Daksha near the havan kunda.

On right of the Lakulisha panel is shown Shiva and Parvati playing a game of dice. Dr Qureshi mentions that Paravti seems to have finished and won the game is no more in mood to play again. However Shiva is trying to insists her into another round of game.  There are two dvarpalas on either side of the door. They are attendant by dwarf attendants. On the lateral sides are single cells supported on four pillars and two pilasters.

An exit from the above hall takes you into a open space, measuring 42 feet by 66 feet. This open courtyard is bigger in comparison to the chamber on the western side. This is a open courtyard as there is no ceiling. The exit door of the above hall has an image of Nataraja on the lintel of its external façade. It is much defaced however the lower portion is more or less intact. Dvarpalas are provided at their usual place on this doorway.

This open courtyard is connected with another hall, 36 feet by 45 feet, where cells are provided on either side. These single cells are supported on four pillars and two pilasters. The back walls of these cells were covered with lavish carvings however these are almost wiped out now. A modern image if Ganesha is under worship in the left cell at present. The exit from this hall will take you into the residential block. The external façade of this exit has Ravana-anugraha murti over its lintel. However this sculpture is much defaced expect its lower part which helps in its identification.

Now we come back to our main hall. On its southern side, three doors and two windows are provided. The doors open up into a large verandah and a pillared portico. The portico is 120 feet long and supported on ten pillars and two pilasters. This area at the moment is used to perform homas and havanas. There are further excavations around this verandah however most of these are in use for the temple and nothing of interest except one excavation which has three entrances leading into a single cell. There are dvarpalas on one side of the entrance.

How to Reach – These caves are located in Pratap Nagar in Jogeshvari region. As this is a live temple so you will not find any inconvenience in locating it. It is very near to Jogeshvari flyover, from the flyover on Jogeshvari-Pawai link road, take left to Pratap Nagar.