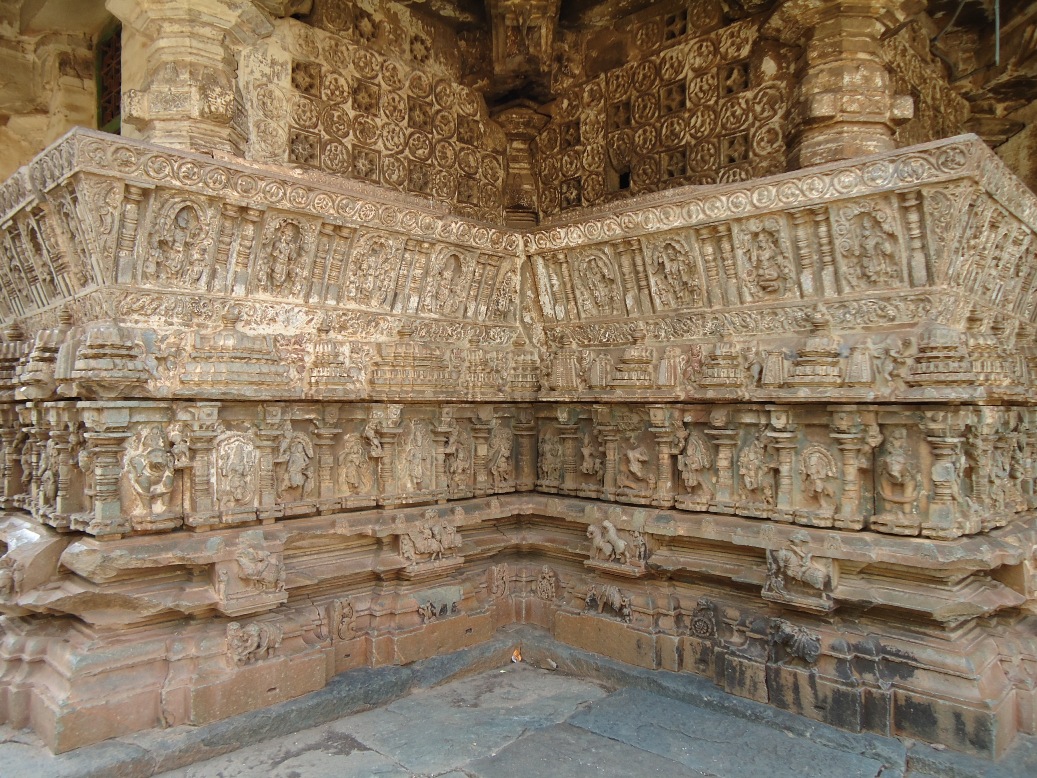 Introduction –  Gadag is the headquarter town of the district bearing same name. Before the formation of a new separate district, the town was part of Dharwad district. The town has been referred with various names in the past, Kratuka, Kratapura, Kardugu, Galadugu, Gadugu. As per a tradition mentioned in the Dharwad Gazetteer, it is told that Gadag was setup as a Maha-agrahara by Janamejaya of the Mahabharata times.

The earliest known historical antiquity goes back to the Rashtrakuta period of the ninth century CE. Soon we find the Western Chalukyas ruling over the region, and many inscriptions of their early ruler Satshraya are found in Gadag. In these inscriptions, Gadag is referred as Kardugu and was part of Belvola-nadu.

It is interesting to note an inscription, dated 1002 CE from the reign of Satyashraya where Mahasamanta Sobhanarasa made a grant to the temple of svayambhudeva at Gadag. However in the very next inscription, dated 1008 CE, we find a mention of fight ensued with the king’s officers when they asked for the surrender of Sobhanayya (Sobhanarasa) who is proclaimed as a traitor.

During the Kalachuris, the town got a new name as Kratupura which continued in use till the Hoysala times. During the Hoysalas, the town gained munch importance and the credit goes to Siddhanti-Chandrabhushana-pandita-deva, who later became the rajguru of the Hoysalas, From the start of the thirteenth century CE, the town was known as Gadugu. The present name, Gadag, is a derivation of this name.

David N Lorenzen states that there are strong evidences in favor of Siddhanti-Chandrabhushana-Pandita-deva that he belonged to the Belagave line of Kalamukha acharyas, Vidhyabharana of which was a prominent guru at Kedareshvar temple at Belagave. As per an inscription at Gadag, he is said to be born in the line of Kalamukha acharyas and his guru is mentioned as Vidhyabharana-deva.

This suggests that though Gadag is far from Belagave however it was an important Kalamukha center during thirteenth and fourteenth centuries CE under the Yadavas and Hoysalas. S N Sen states that Gadag was a center of the Kalamukha or Lakulashaiva branch of the Pashupata sect under the Seuna dynasty.

During the Kalyani Chalukyas’ times Gadag, being a prominent Kalamukha center, was abuzz with architectural activities. Many artists from this town were involved in construction of temples at other sites. Nagoja was such an artists who worked in the Chenna-keshava temple at Belur. As per an inscription there, Nagoja, who was (artist of the) god Trikuteshvara of Gadag. This suggests that Nagoja hailed from Gadag and was a devotee of the god Trikuteshvara.

Monuments – There are many temples and religious structures at Gadag. Four temples stand out among these, and these four are described in details below.

Trikuteshvara Temple – J Burgess mentions that this temple was situated in the fort, however now the temple lies well within the city among the present habitation areas. Very few vestiges  There are two main temples and a tank inside the complex. All together, this complex can be termed as trikuta style, comprising of the main Trikuteshvara temple and Sarasvati temple.

Three phases of development has been identified for this complex. In the first phase, the main vimana of Trikuteshvara temple with its sukanasi (roof above vestibule) and a closed mandapa (hall) with two entrances, one on east and another on south, were constructed. The second phase introduced the west facing vimana with its sukanasi and a big open mandapa, converting the whole composition into a dvikuta shrine. as Sarasvati temple with its open mandapa (hall). This open mandapa was connected to the main shrine through its eastern doorway of the closed mandapa. The third and the last phase introduced the north facing Sarasvati temple which though standing apart is axially aligned to the main structure thus transforming the whole complex into a trikuta shrine.

The external facade of the vimana is opulently carved with sculptures depicting gods and semi-gods. The sculptures are small however full of energy and craftsmanship. The southern doorway of the closed mandapa is provided with a porch which is a later addition. The eastern doorway, now joined with the open mandapa, has Gaja-Lakshmi with four elephants on its lintel. The antarala doorway is a simple structure with perforated screens on either side. Gaja-Lakshmi is present on its lintel and above it are shown Brahma, Vishnu and Shiva. The sanctum has three Shiva-lingas set upon a single peetha. This is probably the reason why the god is referred as Trikuteshvara (the Lord of three Mountains). Reference of Trilinga region should be made here as the three lingas surrounding this region were on the three different mountains, Kaleshvara, Srisailam and Bheemshvara.  These three mountains also constitute the Trikuteshvara concept of Lord Shiva.

Where the interior of the temple is very simple and devoid of any decoration, the exterior is in quite contrast. The niches of the main vimana are empty except the northern one which houses an image of Vishnu. A distinctive feature which is witnessed in many temples of this period, open space between the parapet wall and beam below cornice is absent here. This open space is usually adorned with slanted slabs similar to back-rest seats. But in this temple, this space is closed with perforated stone screens.

These perforated screens are decorated with medallions and has openings on each alternate square section. James Fergusson puts the temple as one of the most complete illustrations of the Chalukya style of architecture. About the decoration of the temple, Burgess writes that no chased work in silver or gold could possibly be finer, and the patterns to this day are copied by goldsmiths, who take casts and moulds from them, but fail in representing the sharpness and finish of the original.

The shikhara of the main shrine has been reconstructed over the time however its lower tala (tier) is still the original showing the aedicular arrangement. The shikhara of the western shrine has not survived. The top part of the basement has stone slabs sloping outwards. The part below has been carved with panels depicting shikharas separated with pilasters. Under the shikhara are shown dancers, musicians, demi-gods, gods, ascetics and elephants. Continuous whitewash over a long period has resulted in the obliteration of the major features of these figures.

The main shrine of Trikuteshvara temple can be dated between 1000-1050 CE. The earliest inscription referring to god Trikuteshavara is dated in 1037 CE.

Sarasvati Temple – This temple faces north and comprises of an antarala (vestibule) and an open mandapa. It is situated within the same complex as of the Trikuteshvara temple and together with the former makes the over structure as a trikuta shrine. Henry Cousens mentions that some of the best works of the Chalukyan style are seen in this temple. Apart from the outer decoration, particular attention is to be attributed to the pillars supporting the mandapa as these are the best specimen of the Chalukyan work.

The mandapa is supported on four full length pillars and fourteen half-pillars. Four pillars supporting the central ceiling are in one pattern and the remaining are executed in pairs. The central ceiling is worth noticing as it reflects the wooden construction techniques, in opinion of Cousens. The ceiling has ribs crossing and re-crossing each others. Lotus pendants hang at their intersections. The prettiest feature is the central pendant, though it has been broken away.

The central four pillars have base similar to the basements seen on temples of this period. These are square at base, recessing to octagon and then to round near the capital. The facets of the square and octagonal sections are decorated with miniature carvings however these are much defaced and deteriorated. The facets on octagonal sections have images of ashta-dikpalas (eight directional guardians).

Henry Cousens mentions that the two pillars standing on either side of the entrance are the most elaborately worked of all, and there are, perhaps, no other pillar throughout the whole extent of Chalukyan handicraft left to us which are equal to these for the crowded abundance of minute work which covers their surfaces. The ornaments consists of repetitions of miniature shrines, tiny pilasters, panels containing Lilliputian gods, goddesses and attendants, rampant lions, and host of other details.

The antarala is an open space without a doorway. The garbha-ghra doorway is eloborately carved with five bands running around its three sides. The dedicatory block over lintel has Gaja-Lakshmi. Inside the garbha-griha (sanctum) is placed a mutilated image of goddess Saraswati. The image is quite large in size and resting above a pedestal. All her hands are broken away.

Someshvara Temple – This temple at present is not in use and probably abandoned long back. As this was not a live temple, hence it was used as a school as mentioned by Burgess and Cousens during the late nineteenth century CE. Based upon the crude forms of Shiva over the doorways, Cousens suggests that these are the works of Lingayats.

The temple is carved profusely all around however the repetitions across make it rather monotonous. Cousens terms it, “almost painfully monotonous” while Dhaky uses “painful” to describe its monotony.  Foekema explains that repetitions in the wall decorations bring in this monotony. As witnessed in other temples, the decoration differs in recesses and projections however in here the very same decoration scheme is used for recesses and projects, resulting in the monotony.

This temple can be marked as the transition from the Chalukya design towards the Hoysala theme.  The main evidence is the presence of two chhadyas (cornices), one separating the first tala (tier) from the super structure and the second is above it. This double chhadya feature puts this temple as a precursor to the Hoysala designs. The shikhara originally has four talas (tiers) however only three remain now.

Rameshvara Temple – This temple is situated near the Someshvara temple. The temple is in much deteriorated condition. Its vimana and closed mandapa are still standing and it can inferred that it was originally a trikuta temple with three shrines sharing a common mandapa. This common closed mandapa was connected to a large open mandapa. The western side of the closed hall was left undressed suggesting the original plan of building an open mandapa attached to it.

Inside the mandapa are provided four niches, two on the either side of antarala and two on opposite lateral walls. These niches are empty at present. The central ceiling of the mandapa is supported on four pillars which depict beautiful geometrical designs with floral motifs.

Veera-Narayana Temple – This is the main temple at present in Gadag. The temple was built during the Kalyani Chalukya times however it received continuous patronage till the Vijayanagara rulers. Kannada poet Kumara Vyasa composed his monumental work in this temple sitting before the image of the god.

The temple is located within a huge complex. Photography is not allowed inside hence I was not able to get much in my lenses, however there is nothing much on interest as well. The old structures are overshadowed by modern constructions.

Gadag Museum – There is a museum in Gadag which is maintained by Karnataka State Archaeological department. It is a big museum having various galleries and housing many artifacts. You can purchase books published by department from here.

Betageri – Betageri is about 3 km from Gadag city center and it comes under the municipality of Gadag. Fifteen inscription slabs (vira-kals) are placed inside an enclosed compound in the middle of the village. Many of these stones have symbols of the man’s trade or caste carved at the base of the slab. Among these symbols are found plough, oil-mill, mason’s mallet, block of stone etc. One of the inscription is dated in Saka 893 in the reign of the Rashtrakuta king Krishna II, recording the death of Kaligalla in a defensive fight at Battakere.

How to Reach – Gadag is well connected with all major cities of Karnataka by road and rail. A visitor will find no problems in locating the monuments within the city.