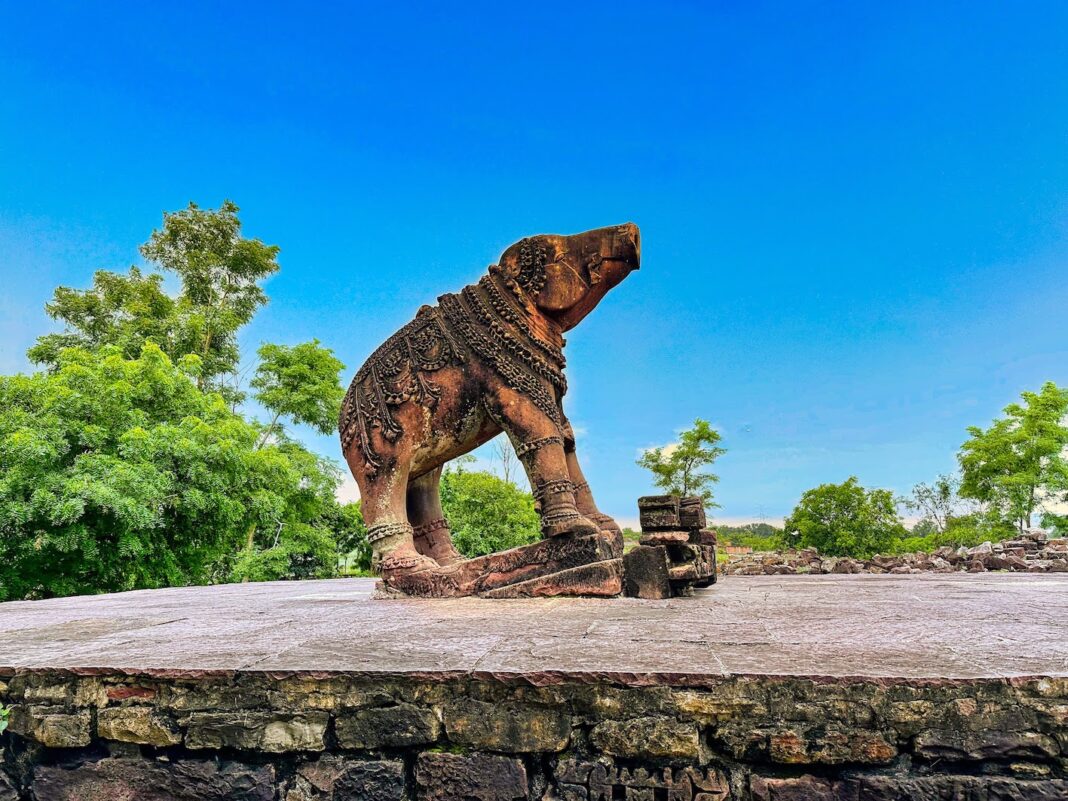 Karitalai village is situated in the Vijayraghavgarh tehsil of Katni district in Madhya Pradesh. The village is known as Karnapura or Karanpur. The village would have assumed considerable importance during the ninth century CE during the reign of the Kaalchuri king Lakshmanaraja I. During the tenth century CE, a majestic temple was constructed and the Kalachuri royal family made considerable donations. The tenth-eleventh century CE also witnessed the emergence of Jainism at Karitalai. Five Jain images found at Karitalai, now in the Mahant Ghasidas Memorial Museum at Raipur, are all dateable to the same period as attested by inscriptions on their pedestal. Four of these images are of dvi-tirthika type, having two Tirthankaras on two faces of the stone. The pairs of Tirthakaras are Ajitanatha-Sambhavanatha, Pushpadanta-Sitalanatjha, Dharmanatha-Shantinatha, Mallinatha-Munisuvrata.1 The fifth image is a chaturvimsatipatta image of Parshvanatha. He is shown seated in padmasana-mudra under a canopy made by a seven-hooded serpent. On the right of Parshvanatha are miniature images of nine Tirthankaras and to his left are eight such images. The remaining six were originally carved above the chhatra however it is missing now.2 It appears that images of all twenty-four Tiranthankaras were installed at Karitalai during that time.

The village soon went into oblivion after the Kalachuris. The antiquities of the village were first reported by Alexander Cunningham who visited the place in 1873-74, however, he did not describe these in detail except for a few mentions of inscriptions and sculptures.3 Though Karitalai has been featured in various studies related to iconography and Kalachuri architecture however all of those lack a dedicated and systematic study of the site. Vishnu Varaha Temple – The present image of Varaha is installed over a platform, however, it would have been adorned inside a Vishnu temple constructed by Someshvara, a minister of Lakshmanaraja II, as mentioned in the inscription. The grandeur of the temple has been emphasized in the accompanying inscription stating the temple was sarva-prasada-rajoyam i.e. “chief of all the temples”. The inscription further mentions, “the temple resembled Vishnu in all respects except his Vamana form”, “the moon looked like an umbrella tied to the staff at the top of the temple”, “the white flag on the high staff at the top of the temple touched the heavenly stream which looked like flag attached to the staff, as it were; the staff, on its turn was joined to the kanaka-kalasa set on the spire of the temple”.4 This Varaha sculpture is carved in sandstone and measures 6 feet long, 5 feet high and 3 feet broad.5 The image of Varaha is adequately decorated with figures and festoons however it is not as richly decorated as seen in some other Varaha statues such as at Eran, Badoh, and Khajuraho. There are a total of four rows of figures carved over the body of Varaha. The topmost row, at the back of the boar, has ten figures, all shown seated in yogasana-mudra. The next row runs both sides of the body and it has sapta-matrika group with Ganesha and Virabhadra and additional twenty-one figures of sages shown seated in yogasana-mudra. The next row also runs across the body of Varaha, and has forty figures of sages shown seated in yogasana-mudra, each carrying a water vessel and a danda. The last row has figures of seated sages interspersed with yajna-kundas and a few female figures. In total, there are twenty-six figures of sages, eight female figures, and three yajna-kundas. Below the last row, on either side of the body, a garland of three festoons is carved. A few of these festoons have naga figures inside. Both the tusks of Varaha are broken. Two festoon garlands are carved over the forehead. One garland is composed of bells and another of human figures. The neck has four rows of garlands, and the bottom last garland is composed of forty-two human figures of sages, all shown seated in yogasana-mudra. Over the head of Varaha is a figure of Brahma. Legs are decorated with bell-shaped anklets. Thighs are also decorated with festoons. This is the only Varaha image in Madhya Pradesh that is decorated with yajna-kundas suggesting the association of Varaha with yajna, thus representing a yajna-Varaha. At the entrance of a dance school, two large statues have been set and installed. However, that was not their original place. One image is of a kachchapa (tortoise) probably representing the Kachchapa avatara of Vishnu. Another image is of a matsya or machcha (fish) probably representing matsya avatara of Vishnu. Generally, we do not have temples dedicated to these two specific avatars but these may appear in a Vishnu temple as secondary images. It is very probable that these two images were originally installed in the Vishnu temple built by minister Someshvara during the Kalachuri period. If that is the case, then it is probable that the temple held images of all the ten avatars of Vishnu.