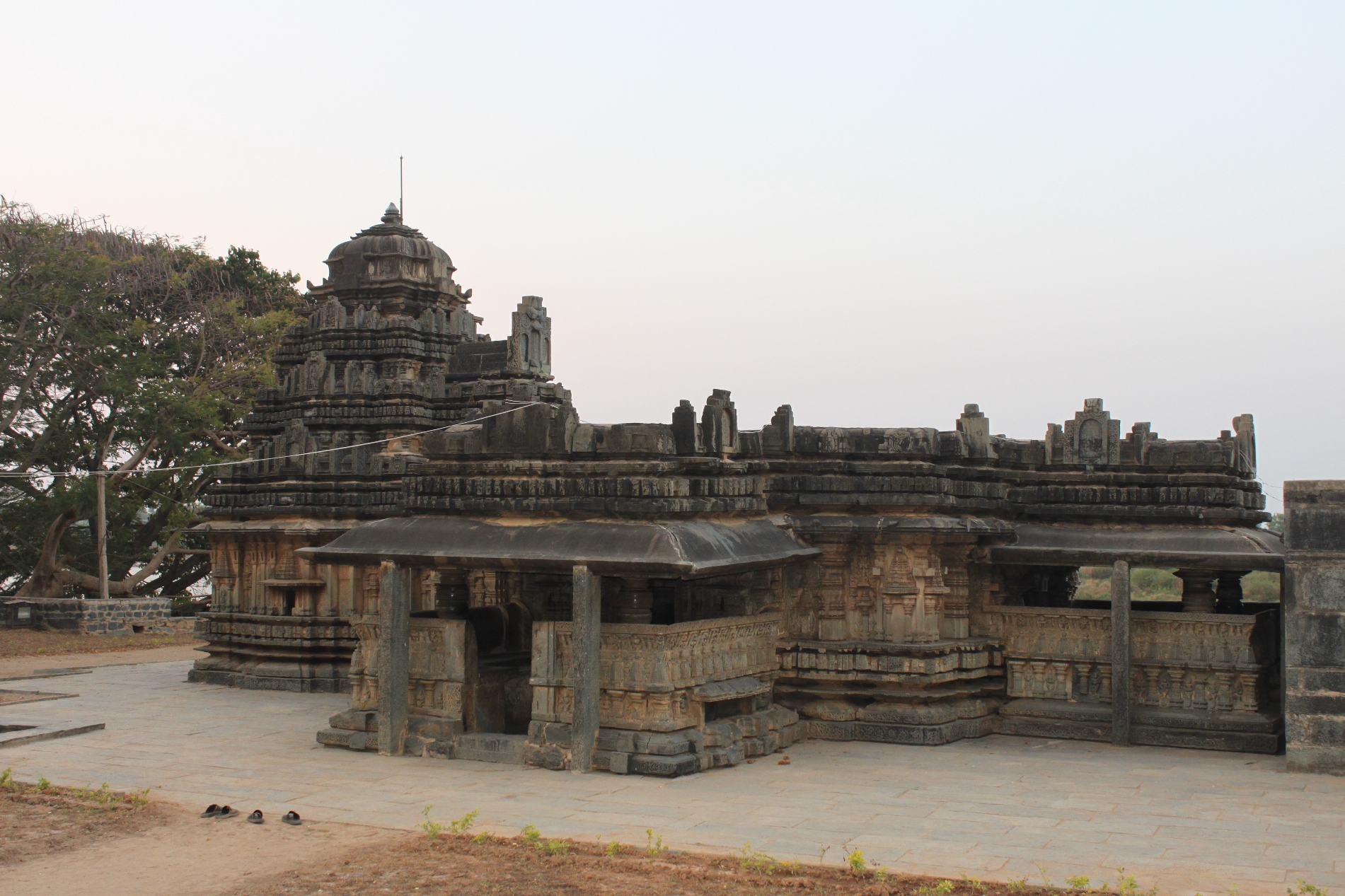 Introduction – Chaudadanpura was an important pilgrimage site in the medieval times however at present it is reduced to a small village. It is located on the southern bank of the Tungabhadra river, a major river in Karnataka state. The place has been referred as Gope, Muktikshetra, Shivapura in inscriptions, Chaudadanpura seems to be a later appellation of the same.

A local tradition assigns the present name, Chaudadanpura, to 12th century CE. As per the legend Shivadeva Wodeyar, who was living here, donated this place to Chaudayya who was a great devotee of Shiva and belonged to the community of boatmen. As the place was donated to him hence it was called as Chaudadanpura.

Viragamottara (stanza 374) mentions a place named Muktinilaya located on the banks of Tungabhadra. Muktinilaya is mentioned to be equally revered by Brahma and Vishnu. Vasundhara Filliozat suggests that this Muktinilaya might be same as Chaudadanpura, as it has been referred in past as Muktikshetra.

She also narrates a story that a swami at Mailara told her that as Tungabhadra takes a curve and the meandering stream runs westwards, then turns to north, hence the place where on course ends and the other begins is called Muktikshtera. River Tungabhadra is compared with Ganga in the inscriptions found here and called as southern Ganga. Similarly, Muktikhstera is called as southern Varanasi (Kashi).

Vasundhara suggests that Chaudadanpura held a considerable importance during the Lakulisa movement period. When lakulisa sect witnessed a setback during twelfth and thirteenth century CE, Chaudadanpura emerged as a great center of Virashiavism. However the earliest inscription found in the temple speaks that Muktikshetra was blessed with Brahmans reciting Samaveda, Gayatri etc which are against the Lakulisa practices.

Shivadeva – Story of Chaudadanpura would be incomplete without mention of Shivadeva. It was he who came here and established a great Lingayata center. As per an inscription (no 4 of this article) when Shiva was asked by his ganas about how to spread the bhakti path on the earth, Shiva replied that as Bamkanatha showed the path to Basavayya, he will show the same to the people by Shivadeva.

An inscription (no 4 of this article) tells that Shivamuddudeva was worshiping Dhavaleshvara at Srigiri (Srisailam). He told that Shiva is the only god and Keshava, Jina and Buddha are his servants. Shivamuddudeva advised Shivadeva to go to Muktikhstera, where holy Tungabhadra flows, and worship Shiva there. Another inscription (no 5 of this article) tells that lord Mallikarjuna told Shivadeva to go Muktikhstera where he resides with Uma as Muktinatha.

Shivadeva arrived at Muktikhstera in 1226 CE. An inscription (no 6 of this artcile) tells that Shivadeva took strict vows and pledges when he entered Muktikhstera. He pledged that he will not embrace women with the arms which embrace the linga nor he will cast any greedy look on them, nor will unite with them, nor will give place to them in his thoughts. He further pledged that he will not cross the limits of Muktikhstera. He declared capital punishment on him if he desire any fruit, svarga and mukti. He shall do daily worship without hankering after any fruit good or bad. After taking these tough vows he performed bhasma-snana.

An inscription (no 6 of this artcile) states that Samgana Basava said that serving Linga and Jangama is the best of religious duties. Shivadeva was highly influenced with Basava and hence he honored both with pleasure. Though Basava does not approve much temple building activities however the inscriptions also tell us that Shivadeva built a temple at Muktikhstera and also repaired a dilapidated temple fully in stone till its finial. He also built stone embankment on the bank of Tungabhadra.

At some time later, the house of the Guttas, local rulers under the Chalukyas and later to the Hoysalas, came under the influence of Shivadeva. The Gutta kings paid many visits and made grants to Shivadeva and lord Muktesha. On support of this royal patronage and support, Shivadeva created Shivadevapura, a real seat of Amarganas on the earth. He founded a Virashiava matha at Chaudadanpura whose control is still in the hands of his descendants, the Wodeyar family, staying in Dharwar.

The fame of Shivadeva spread to great distances. As per an inscription here, when Kannadevi’s hudband died, Siddha Revanadeva advised her to go to Mukteshavara linga where Shivadeva lives. He asked here to worship lord Muktinatha and get blessings to the saint. Kannadevi came to Muktikhstera and started living there. While living at Muktikshetra built a temple dedicated to Kalideva in memory of her husband.

An inscription (no 9 of this article) dated in the 24th regnal year of the Yadava king Ramachandradeva mentions pranalinga of Siddha Shivadeva. This suggests that Shivadeva was no more on the earth at that time. Hence Shivadeva departed the earth before 1292 CE. In his 66 years at Muktikhstera, Shivadeva built up a stronghold seat of the Lingayata movement.

Vasundhara Filliozat mentions that though Basava was the founder of the Lingayata sect but it was Shivadeva who revived this after the death of the former. Sharif Kavi, a nineteenth century CE poet, composed Shivadevavijaya which mentions the life of Shivadeva and Lingayata movement. As this is a very late work and has survived not in full so not much reliance can be put on it.

Monuments – The village is famous for its Mukteshvara temple and a matha.

Mukteshvara Temple – This is the main temple of the Mukteshvara temple complex. The temple is consisted of a garbha-griha, sukanasi and a ranga-mandapa (closed hall), all aligned on the east-west axis. All these elements have an opening on the east except the ranga-mandapa which has two openings, one on east and one on south, both entrances have porches attached.

At a later point of time a modern mandapa was added to the temple however the former has no structural connection with the latter. This mandapa has an opening on east and west and stood detached from the main temple, however as this is constructed on the same east-west axis of the temple so appears to be a part of the same.

Garbha-griha is square in plan as usual for a Hindu temple. It houses a small linga which is not placed over any pitha (base). These types of lingas are assumed to be swamvabhu (self-originating) lingas. As evident from inscriptions of the temple, Shiva came here with Uma himself to stay and bless devotees. The vimana over the grabha-griha is pyramidal shape and has three stories of diminishing size. It is topped with a square dome with its angles protruding up like lotus petals.

Ranga-mandapa has four pillars in center which constitute a square of similar size as that of garbha-griha. There is a unique Surya image placed in this mandapa which was brought from the nearby town of Narsipura. Surya is shown standing below a canopy made of seven hoods of a serpent. A Sapta-matrika panel is also found in a niche in the same mandapa.

Iconography of the temple is hard to reconstruct as the temple has been plundered as suggested by Vasundhara Filliozat. She mentions that remains of mortises on the capitals suggests that carved steles or bracket figures were placed on those however none of these exist at present. She numbered such mortises and states that about 160 such carved steles have been removed from the temple. Foekema differs with 160 number and estimates it to 75. Whichever may be the case, at present the temple gives a look of a deprived one from decoration however it would not been the case when it was constructed and was decorated with all the bracket figures.

The tower of the temple has three steles on each side like gable ends. The first stele is empty while others have either Shiva in his various forms or a goddess. On south we see Shiva as Bhirava accompanied with two ghosts and a dog. On the west we find a seated image of Shiva which Vasundhara Filliozat suggest might be of Sadyojatamurti. On north we find Shiva as Maheshvara.

To the south of the extended mandapa of the main temple, there is a small west facing shrine. This shrine is consisted of a cell and a mandapa. The shrine was referred as the ‘temple of Gomuni’ by Walter Elliot, which is also its present nomenclature. As the inscription mentioning construction of a temple by Kannadevi in memory of her husband and dedicating that to lord Kalinath was found inside this temple hence it might be the very same temple constructed by that lady in 1262 CE.

There are few other shrines in the complex however none has any considerable style or architecture. All are small in proportion with their major features already lost. All are made up on a single cell having a Shivalingas inside. A permanent shed has been recently constructed where all the stele inscriptions are put at single place.

There is no proper foundation inscription about this temple. The earliest inscription found here talks about construction of a Shiva temple by Attiraja during the reign of the Chalukyan king Vikramaditya VI. This inscription is not dated however the event would have taken place in between 1105 and 1115 CE. As the place mentioned in that inscription is Muktikhstera hence it is not very certain whether the temple mentioned in the inscription was the main temple or a subsidiary shrine.

Another inscription dated in 1225 CE mentions that Shivadeva repaired a dilapidated temple from its base to top till finial. If this was the same temple built by Attiraja, was it possible that within 100 years it had to be repaired in such a large scale.

How to Reach – Chaudadanpura is located in Haveri district of Karnataka. From Ranebennur, take Guttal Road (SH57), you need to cross Devaragudda cross & Honnatti village. After travelling about 21 km, there is a small bus stop at the left, this is actually a bus stop for Chaudayyadanapura. Take right just after this bus stop & go for about 3 km, you reach the destination.