Brahmeswara Temple is a very important monument for two reasons. First, it carries a dated foundation inscription which helps putting the Odishan temple chronology in correct order. And second, it is built in a panchayatana style, the first of its kind in Bhubaneswar. On the origin of this this temple, Ekamra Purana tells that Shiva, after an elaborate exposition of the merits of Bhubaneswara as his chosen seat and secret retreat on earth, advised Brahma to erect a temple at a distance of 1130 fathoms to the north-east of the Lingaraja. Vishvakarma built the temple in compliance with Brahma’s instructions1.

Unlike to the earlier temples like Rajarani and Gauri, Brahmesvara is not built over a pitha (platform) however it is able to attain a considerable height of about 60 feet. The deul (temple) consists of a bada and a jagamohana. Its bada is built in pancha-ratha style and composed of pabhaga, jangha and baranda. Pabhaga is built with five mouldings which are rather plain except decorated vertical bars introduced at regular intervals. Jangha is divided into two equal parts separated by a bandhana. 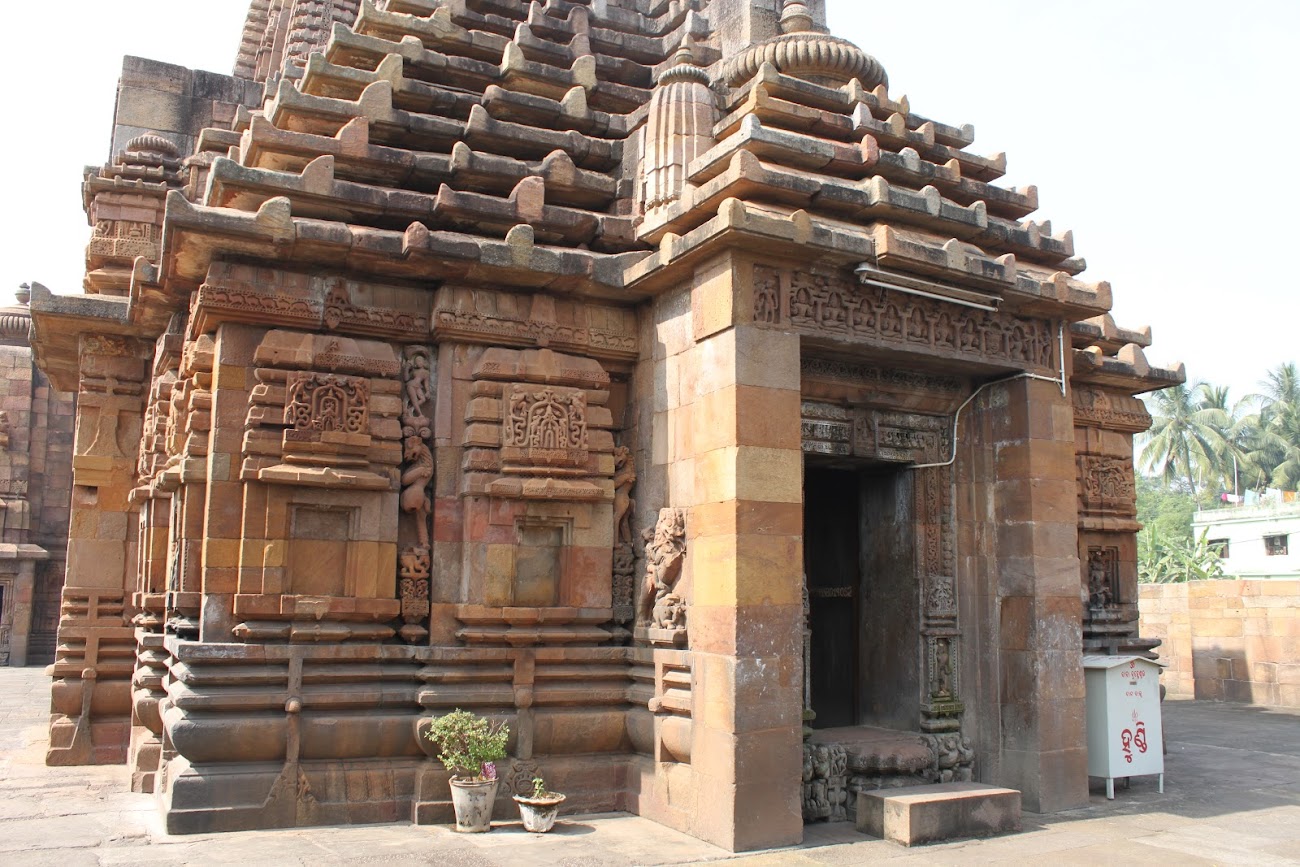 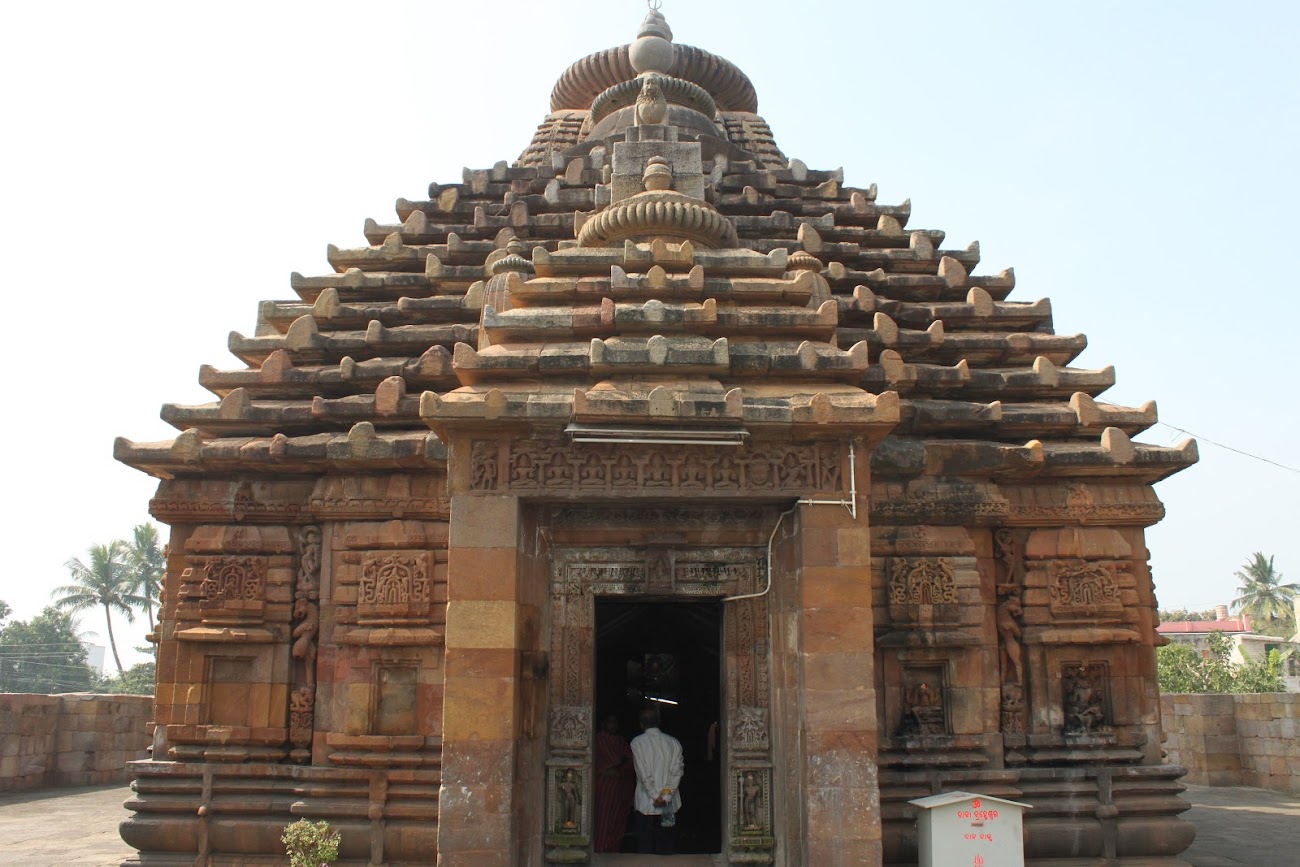 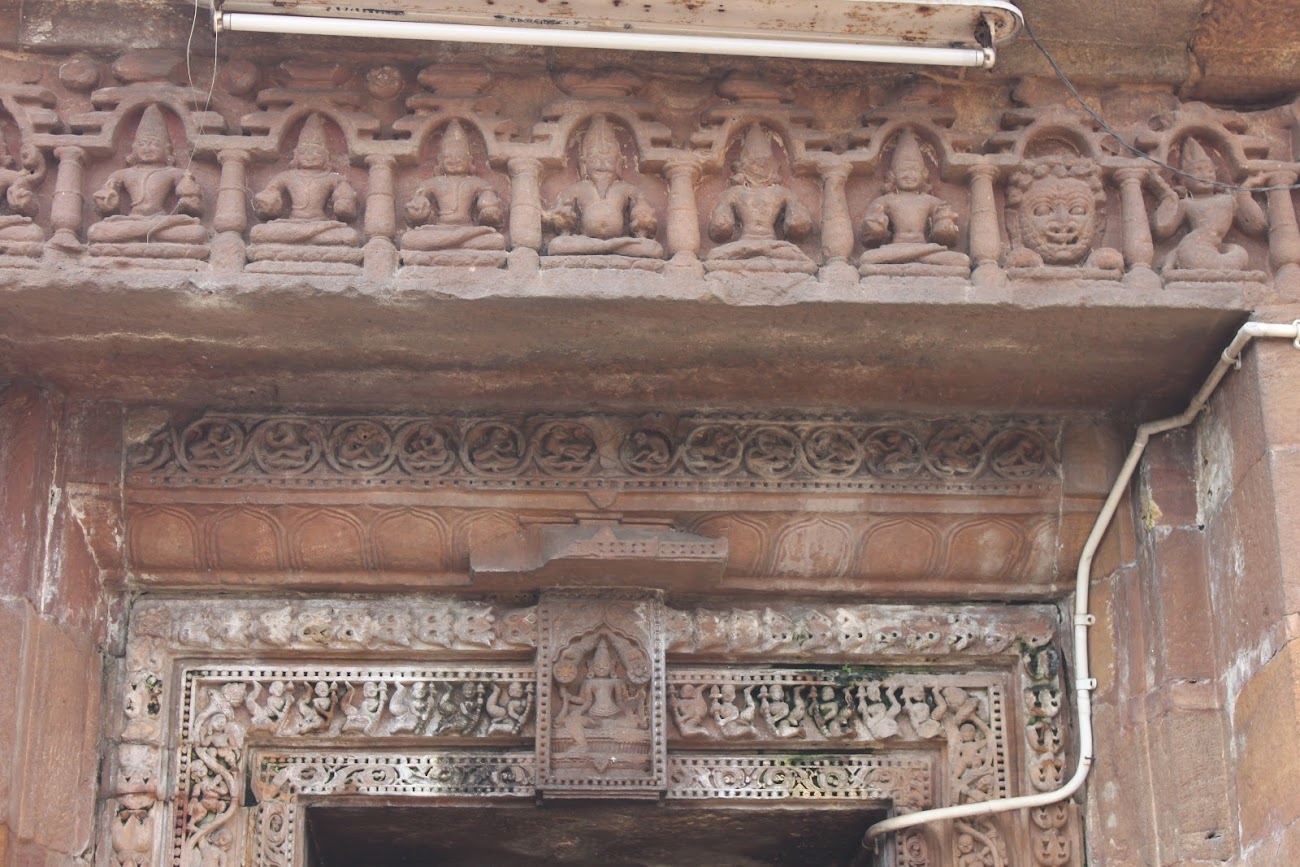 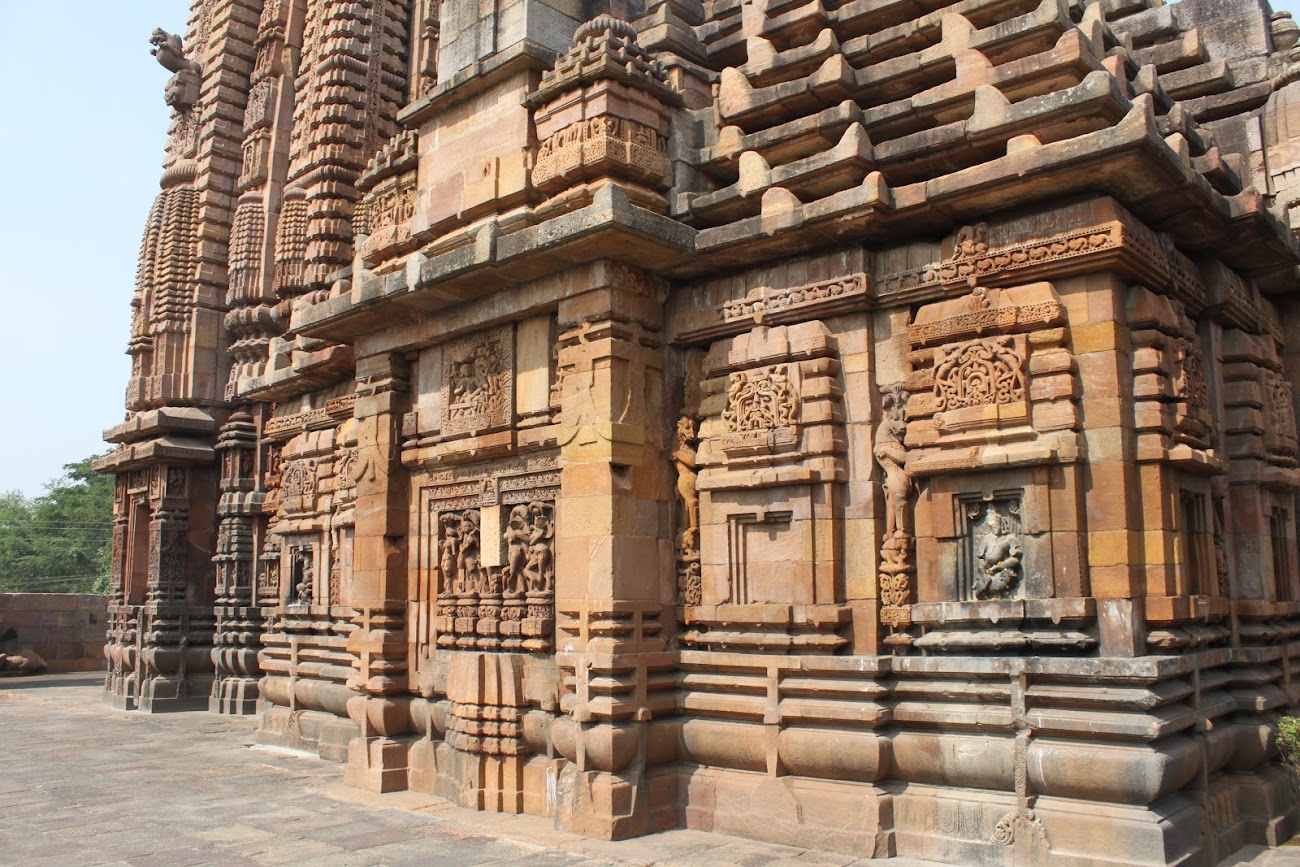 Raha-paga is not made with two storeys but has a single niche occupying the whole space. Niches on raha-pagas are flanked with two decorated pilasters. The capitals of these pilasters have niches housing secular images. The lintel above these pilasters have a large rectangular niche containing siksha-dana (guru-disciple) motifs. These siksha-dana scenes can also be interpreted with royal themes as suggested by Donaldson2. A small niche, below the siksha-dana motif, houses Sarasvati on the west and Ganesha at other places. Raha-niches are empty suggesting that the parshva-devata images were carved using separate stones and fitted later. However, images in kanika and anartha niches are in situ suggesting that these were carved using stones forming part of the structure. 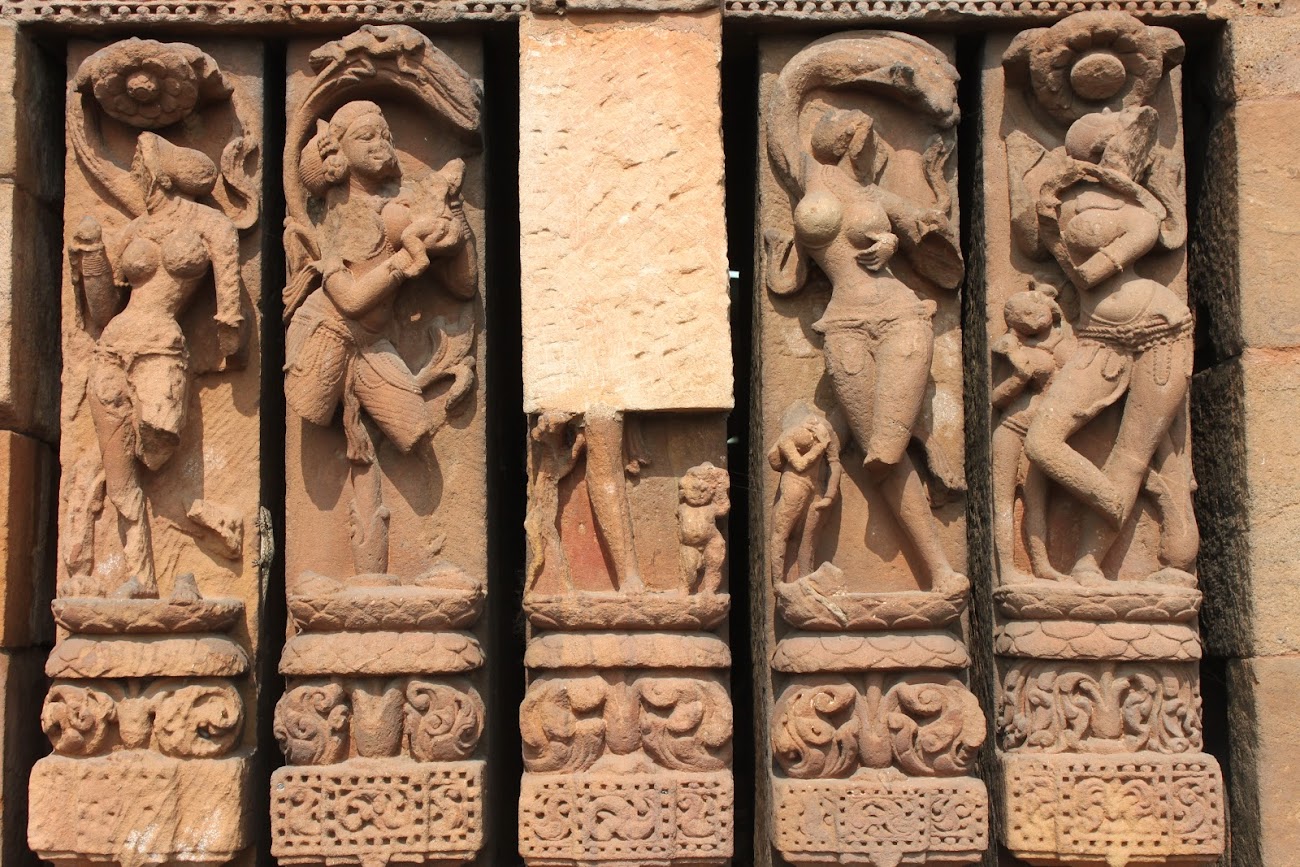 Jagamohana is entered through a large door-frame which has Gaja-Lakshmi at its lalata-bimba. Lintel is decorated with nava-grha, each housed inside a pidha niche. Jagamohana follows the bada in pancha-ratha style. Its pabhaga, built with five mouldings, is left largely non-decorated. Niches are provided on all the pagas. Niches on kanika have dikpalas and anartha have various Shiva aspects. Only six of the dikpalas have survived. Windows are provided on raha-pagas of south and north. Similar to Rajarani, the windows are fitted with five balusters, which are decorated with nagi on the central bar and rests having sala-bhanjikas or alasa-kanyas. Upper part of the window frame has a large niche, which has a royal scene on the south and a dancing theme on the north. Panigrahi3 identifies the dancing lady in the niche with Kolavati, the builder of the temple. 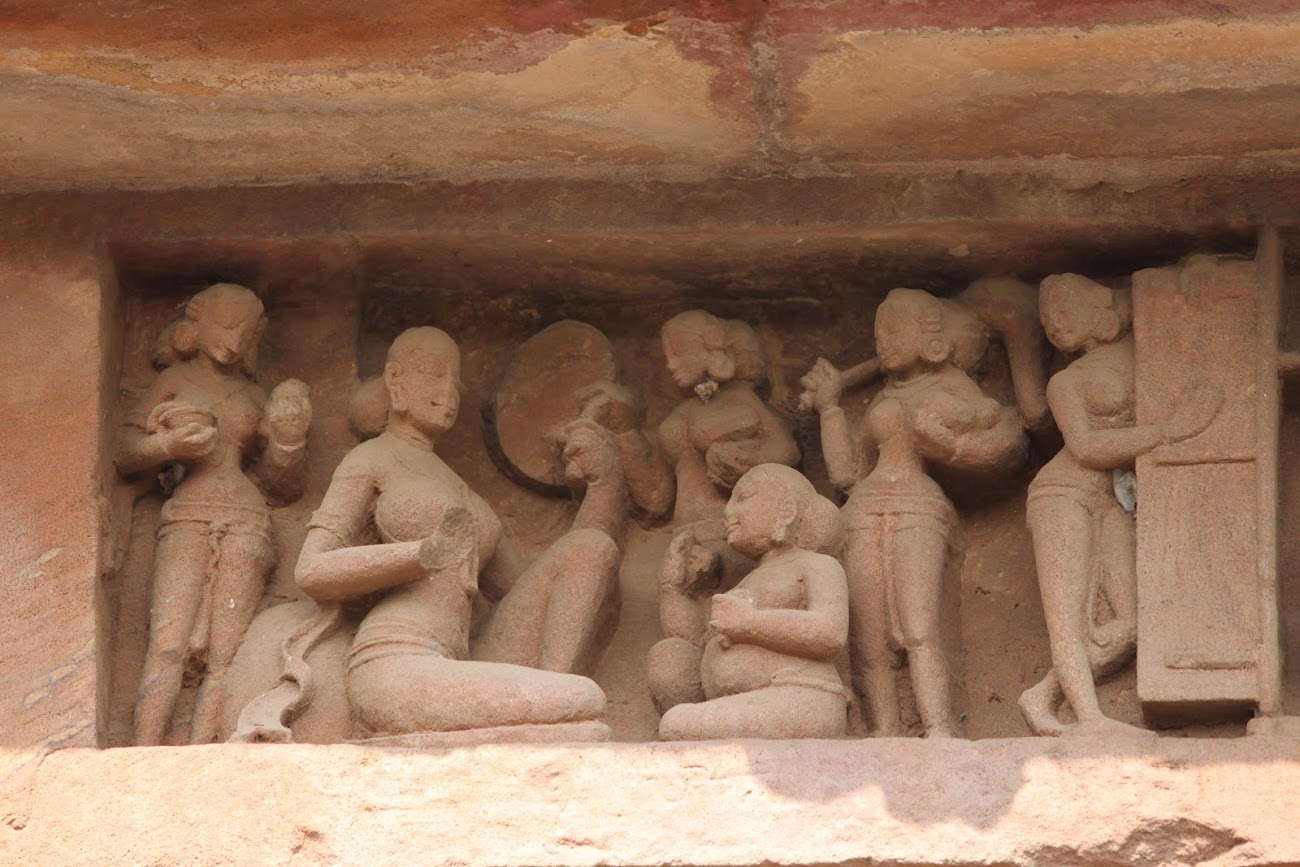 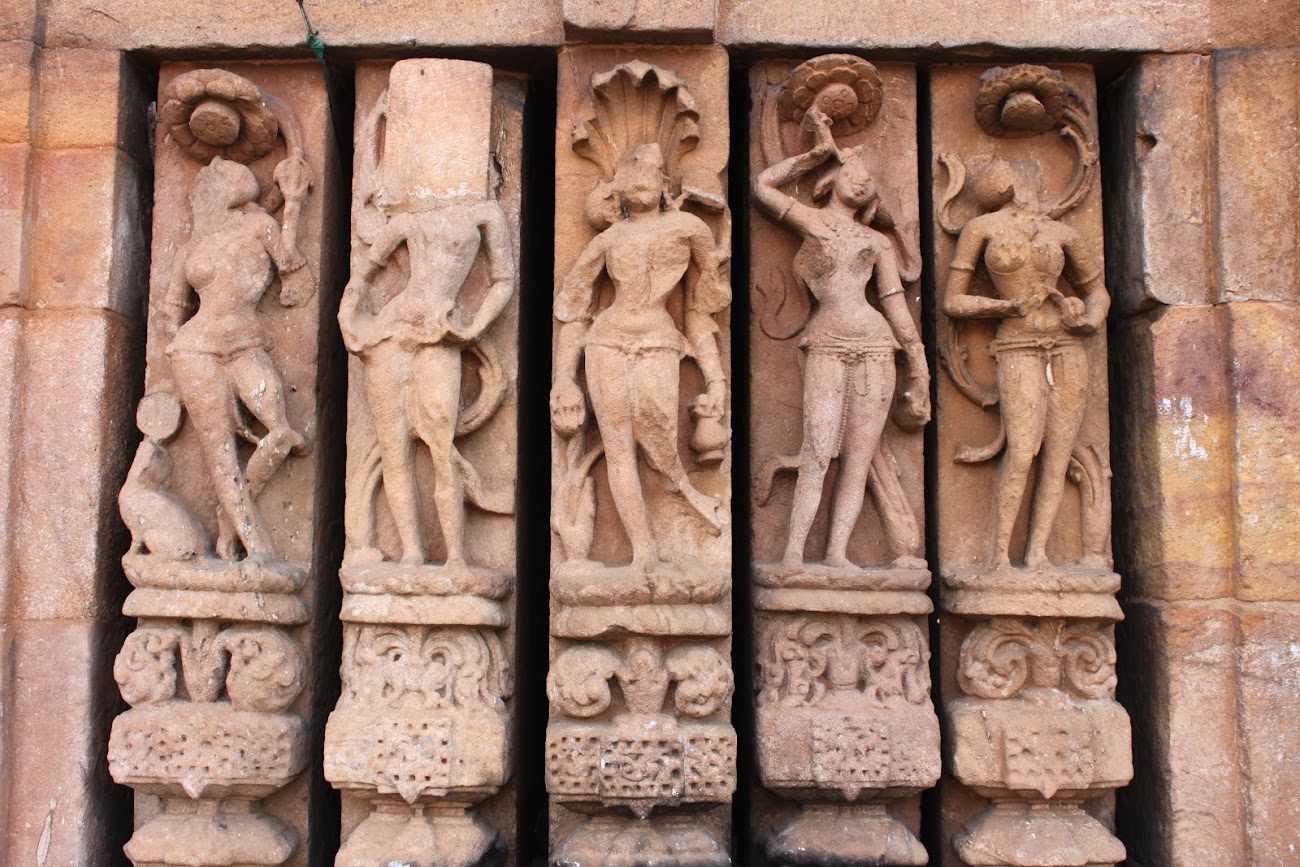 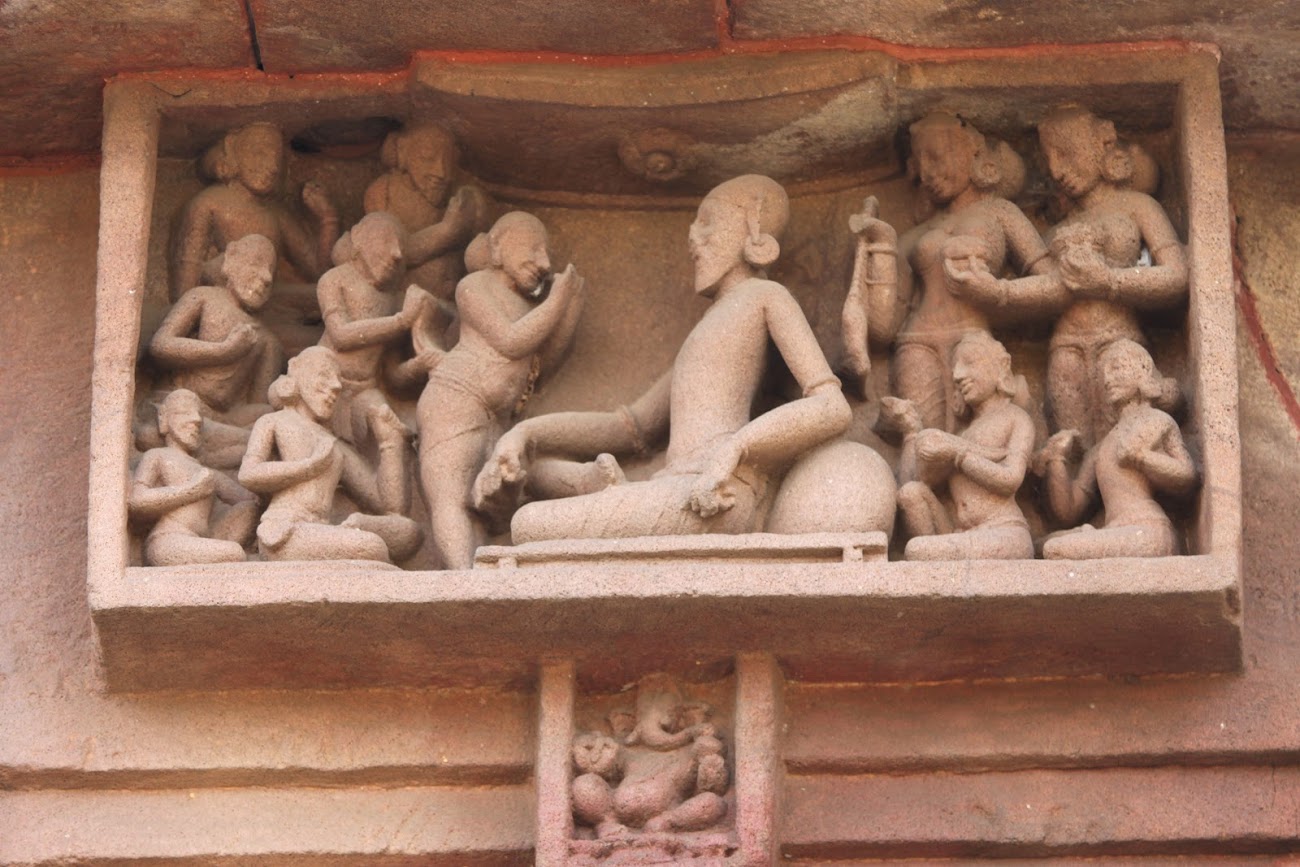 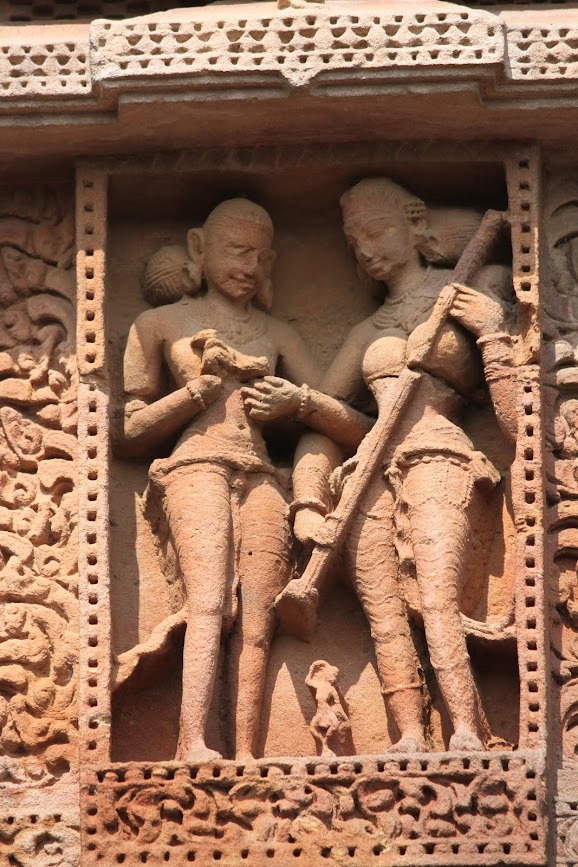 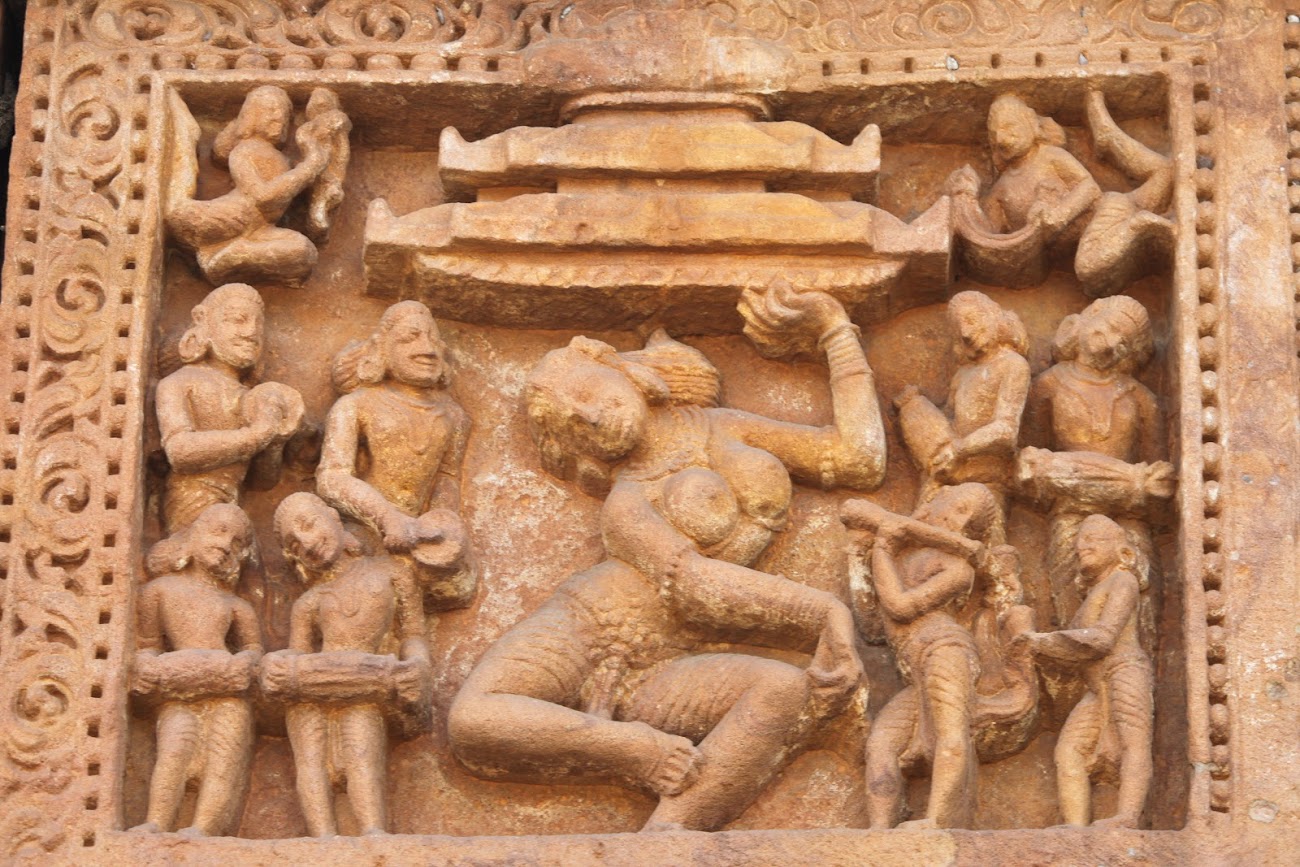 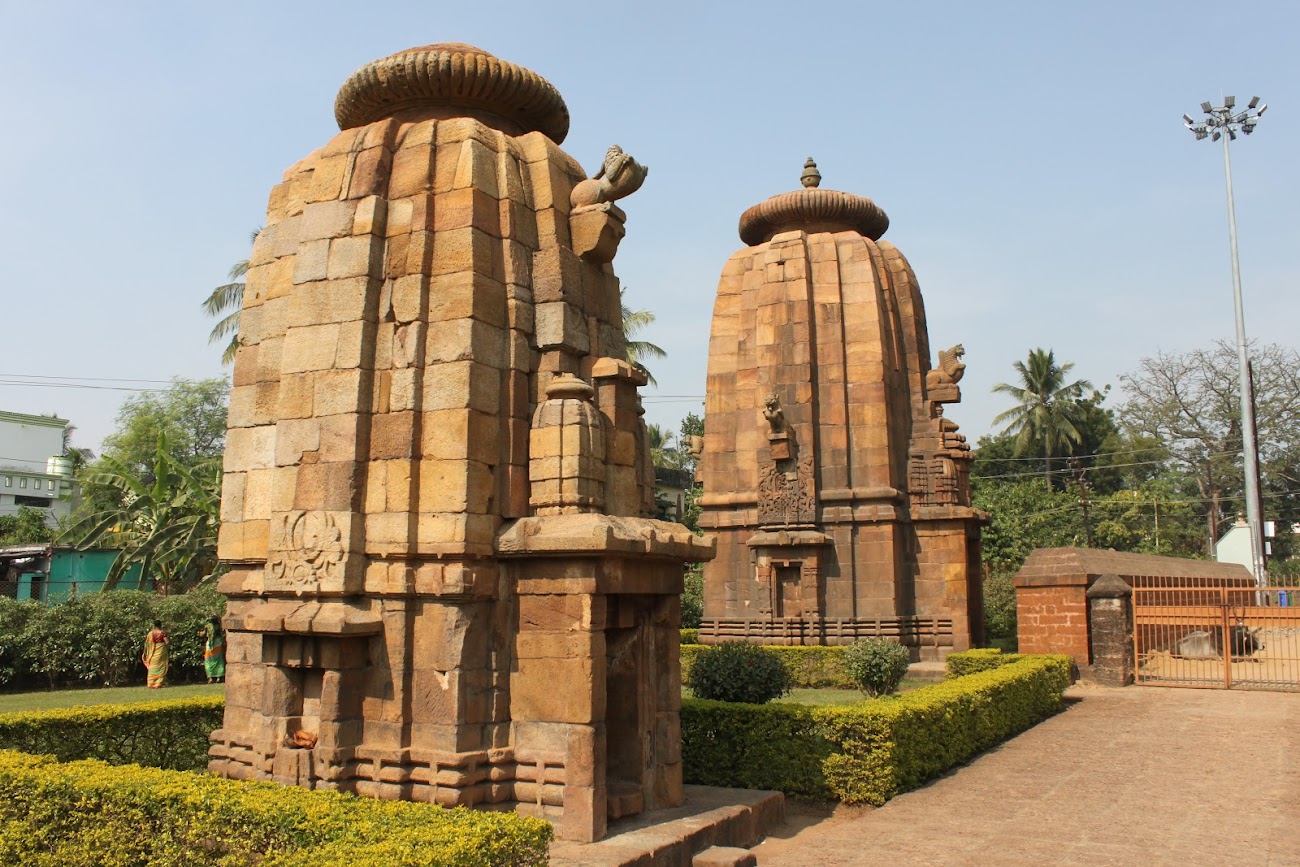 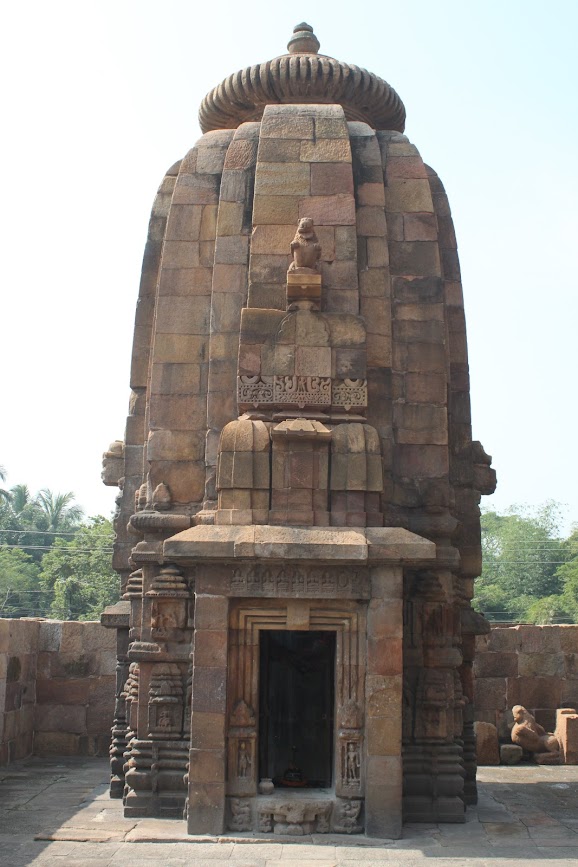