The temples in this group are all situated in near vicinity of each other. They all are almost contemporary, dating to early 12th century CE. They mark the influence of the Gangas as they started strengthening their rule in Odisha. During this period of transition, the previous designs were solidified and new elements got introduced. Overall decoration over the temple exterior is much reduced. The navagrha slab on the doorway lintel started having two atlantid ganas on either sides. River goddesses appeared over door-jambs accompanying dvarpalas.

Koti-Tirtheswara Temple – This temple showcase the start of Ganga style which later became a norm with the Odishan architecture. It is sandwiched in a very short lane providing less or no space to move around the temple. Currently on the deul (vimana) has survived, however, there was once a jagamohana (hall) attached to it as attested by R L Mitra during his visit in late nineteenth century CE. M M Ganguly mentions that its jagamohana was dismantled about 10 years back before his visit and the materials were utilized in the restoration of Anantha-Vasudeva and Sari deul. 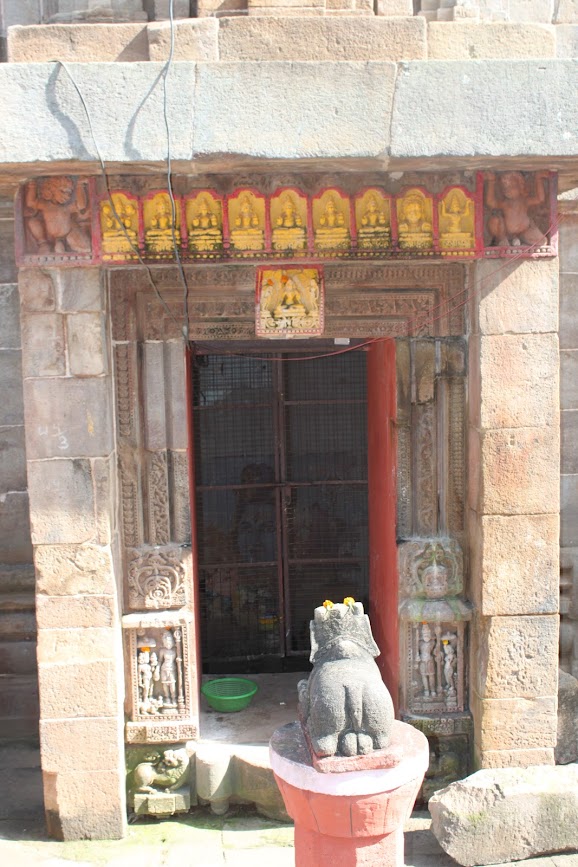 The deul is pancha-ratha in plan and consists of a pitha, bada and gandi. Pitha is a low rising platform mostly buried below the ground. The present garbha-grha deep below the doorframe level suggesting that the present temple is built over a previous shrine. Bada is composed of pabhaga, jangha and baranda. Pabhaga is composed of five mouldings. Jangha is built with only one storey, discarding the earlier trends of two storeys. Baranda is made with three mouldings. Bada is devoid of decoration except at the raha-paga. Continuity of pabhaga and baranda is broken at raha-paga. Pabhaga at raha has a tala-garbhika of khakhara-mundi type. Baranda portion of raha-paga is decorated with a bho-type vajra-mastaka. Niche on raha-paga is enclosed within two pilasters. Niches are empty at present. A gaja-kranta motif is placed over vajra-mastaka. Gandi is rather plain and follows the pancha-ratha pattern as of bada. Beki-bhairavas are supporting amalaka on the top.

Entrance to the deul is built with three bands, Door-jambs have Shaiva dvarpalas accompanied with river goddesses, Ganga on the left and Yamuna on the right, riding at their respective mounts, makara and tortoise. Gaja-Lakshmi is present over lalata-bimba. The doorway lintel has nava-grhas flanked by bhara-vahaka ganas on either side. The vajra-mastaka on the front is also not much decorated. Temple can be dated to early 12th century CE.

Subarna-Jaleswara Temple – This temple was once adorned with a jagamohana however only deul has survived at present. Like Koti-Tirtheswara, the deul here also consists of a pitha, bada and gandi. Pitha is mostly buried suggesting its antiquity and later structure being built over original. Deul is panch-ratha in design. Pabhaga is composed of four mouldings, unlike the standard of five mouldings. Jangha here is divided into two storeys whose decoration is left unfinished except at the raha-paga. Baranda is made with four mouldings. Gandi is decorated with anga-shikharas at its first bhumi (floor), rest of the gandi is plain. 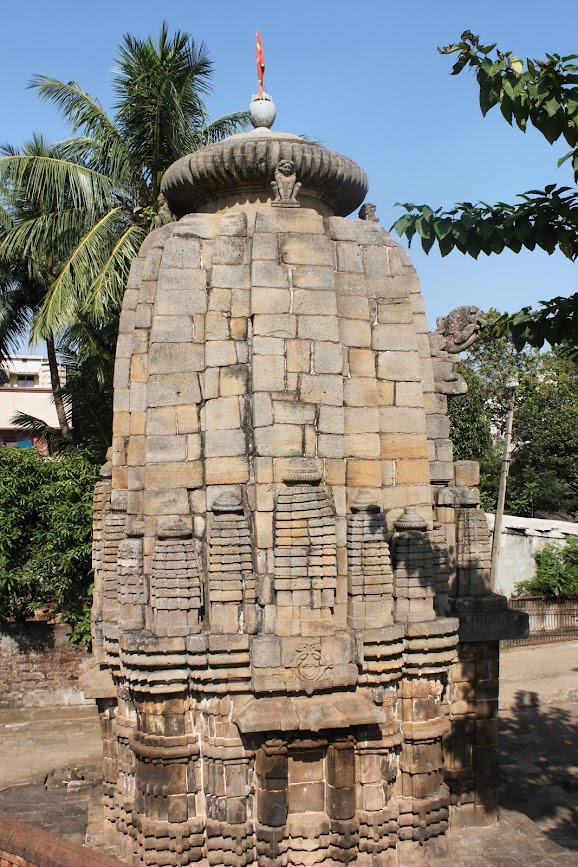 The entrance to deul is very similar to Koti-Tirtheswara temple. Dvarpalas, accompanied with Ganga and Yamuna, are placed on the door-jambs. Lalata-bimba is empty now however it might have been planned to house Gaja-Lakshmi motif there. The vajra-masataka on the front is left unfinished. 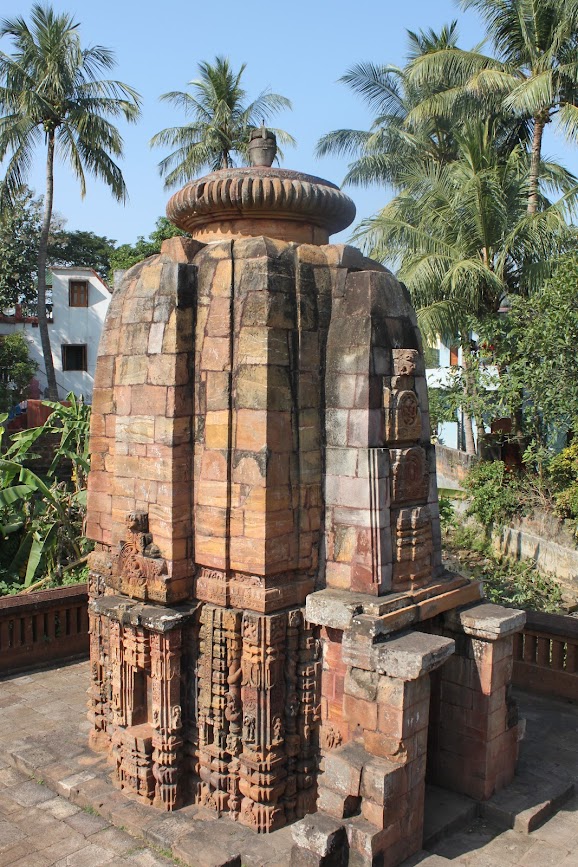 Sampurna-Jaleswara Temple – This is the third and the last temple in the group, however it is the most complete in terms of decoration and plan. There once stood a jagamohana attached to the temple however at present only deul has survived. The temple has been reconstructed from the ruinous state it was in till few decades back. 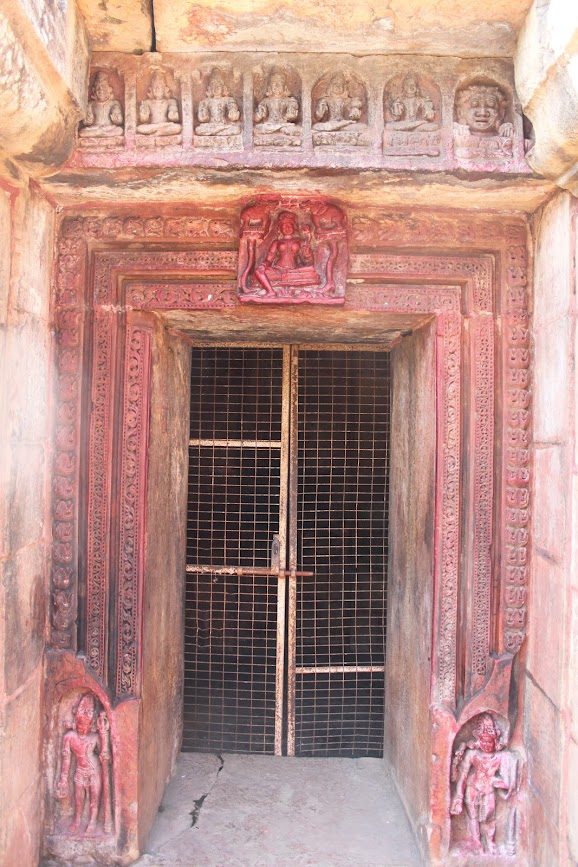 The entrance to the deul is very similar to the other above two temples. Door-frame is composed of three bands, with dvarpalas at the jambs. However, we do not see river goddesses here, as they probably did not survive or hidden by a modern portico. Gaja-Lakshmi is present over lalata-bimba. Navagrha panel is on the lintel. 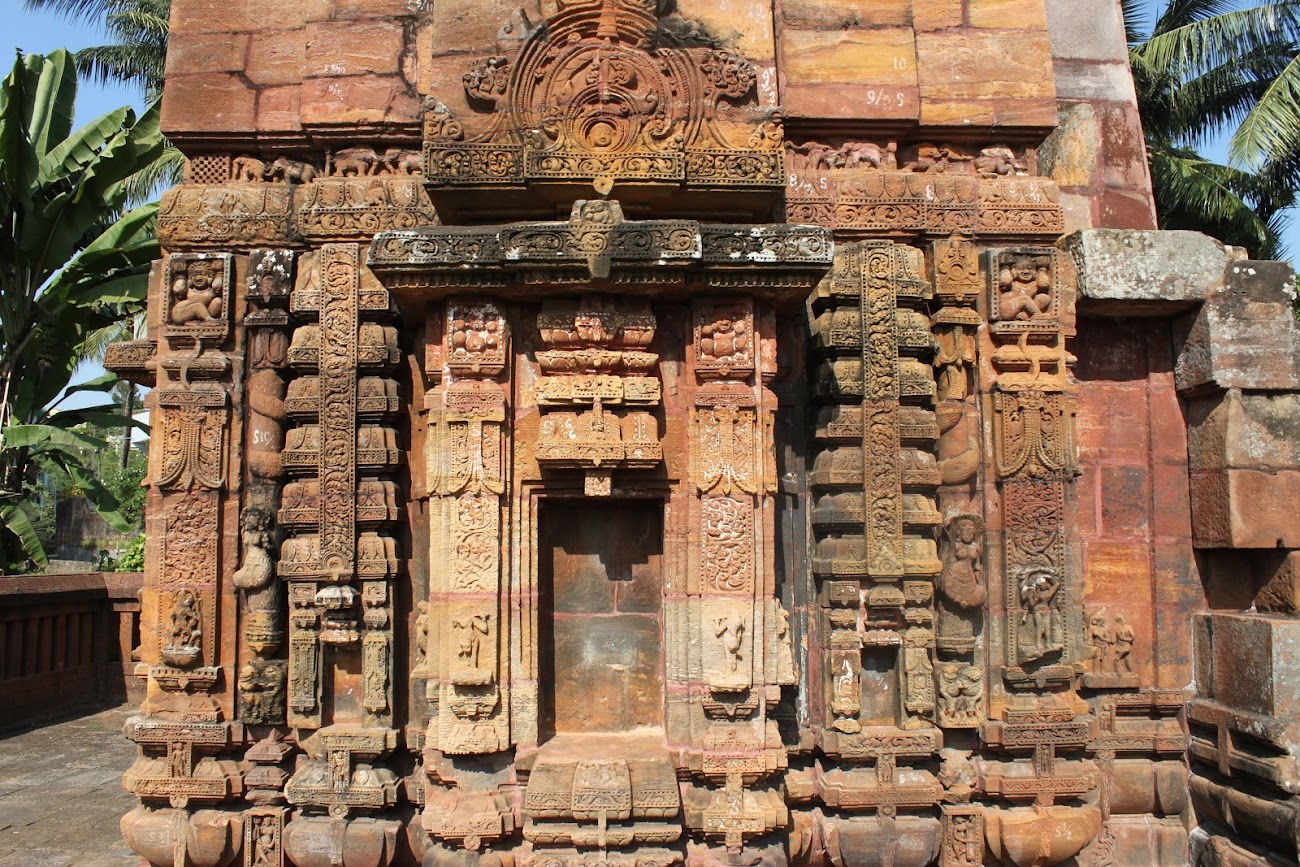 Deul is built in pancha-ratha style. Pabhaga is composed of four mouldings. Decoration over the pagas is complete, with recess being occupied with naga-stambhas (naga pillars). Raha-niche is built in a pidha-mundi fashion topped with vajra-mastaka. Kanika-paga is without a niche but a slim pilaster with a sala-bhanjika at the bottom. Anartha-paga is provided with a small niche at the bottom. All niches are empty at present. 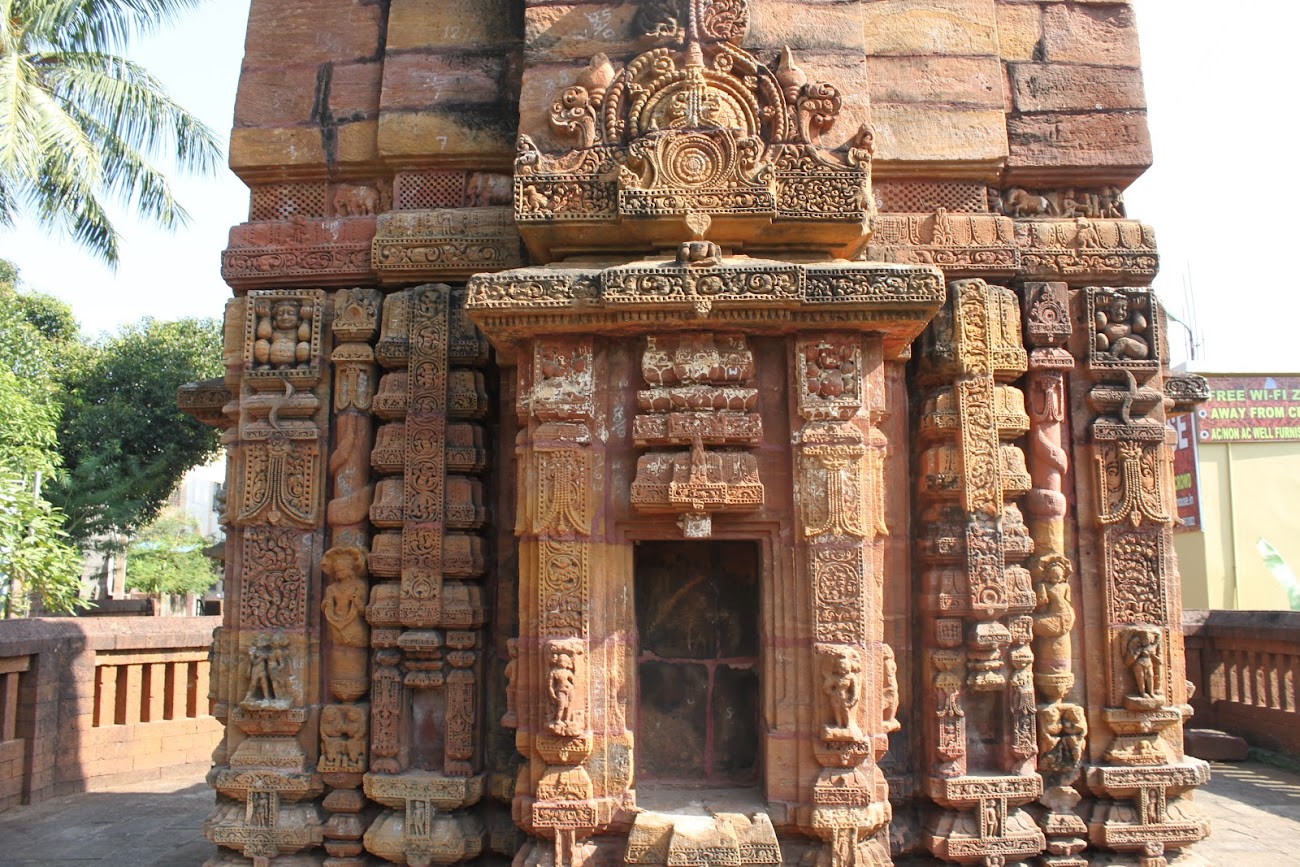 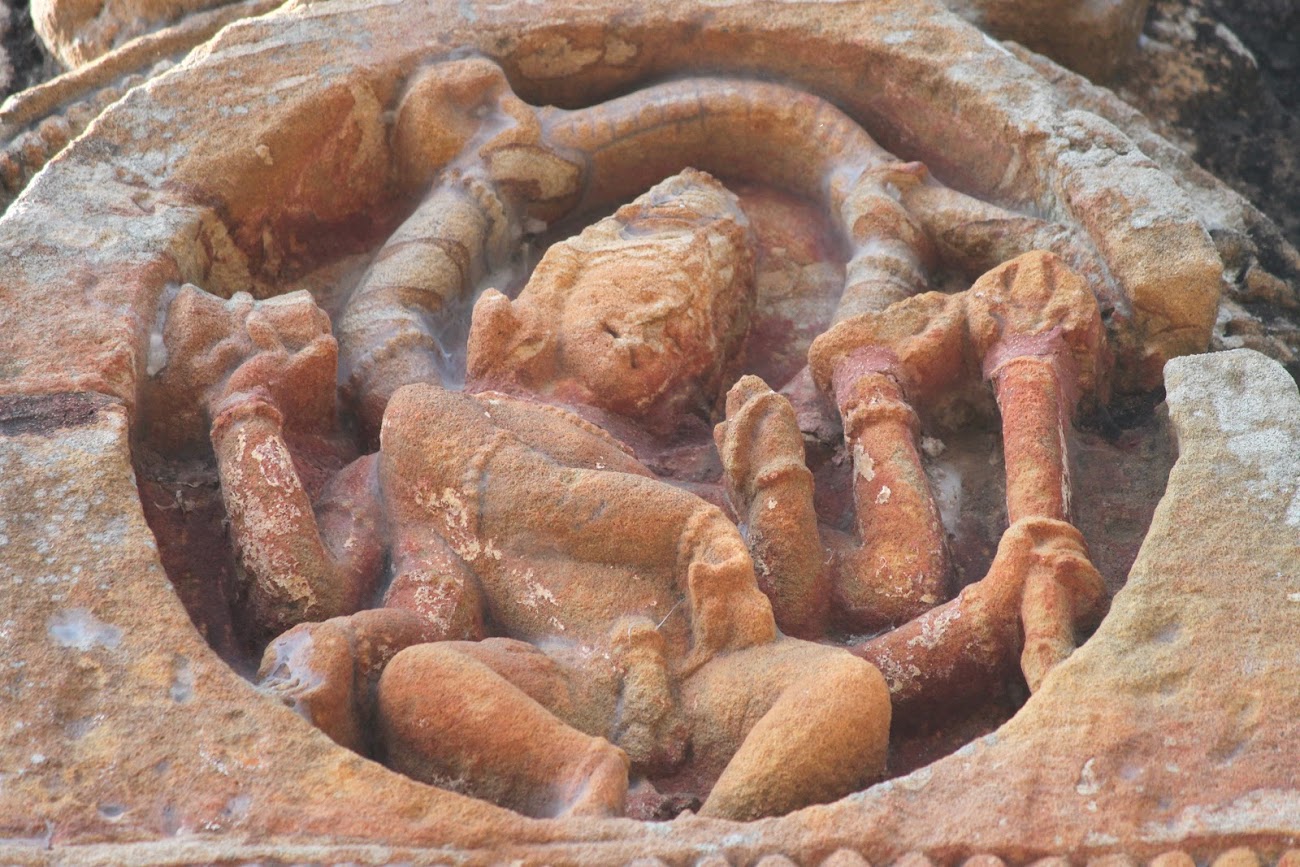