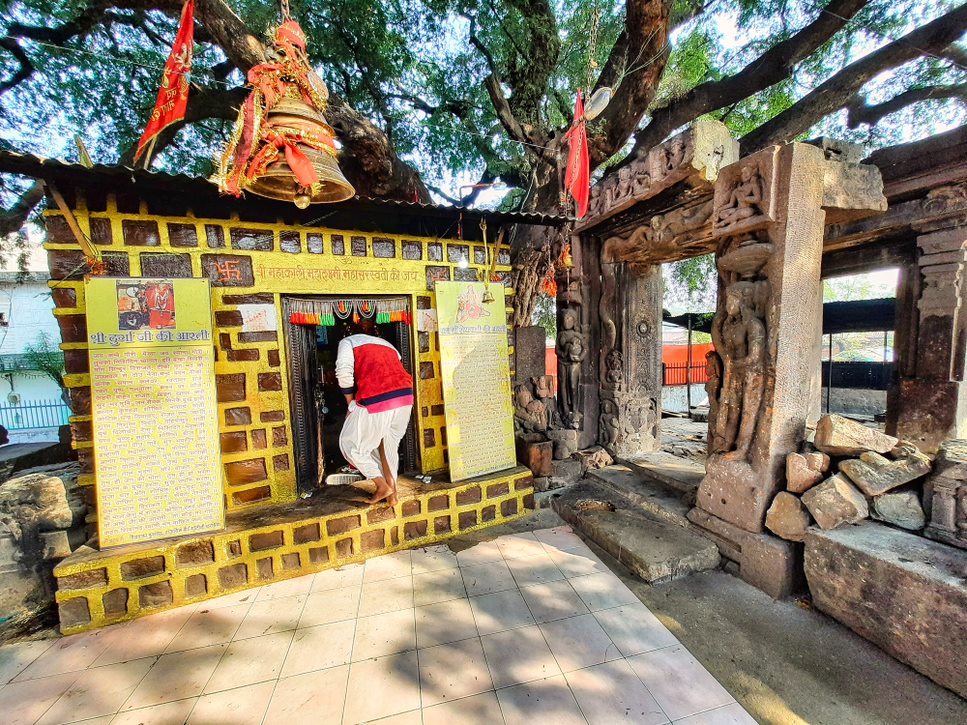 Adbhar (अड़भार) is a town in the Janjgir-Champa district of Chhattisgarh. With the formation of the Sakti district on 15th August 2021, the town of Adbhar will become a part of this new district after all political formalities are completed. The ancient name of the town was Astadvara (अष्टद्वार) meaning “with eight doors”. The Bilaspur state gazetteer1 mentions a few old tanks and traces of old forts with moats around. There probably existed eight entrances/doorways attached to that mud fort lending the name to the village. At present, the village is famous for its Ashtabhuji temple, dedicated to the Dakshina Kali goddess, taken by the locals as the second only to the famous Dakshina Kali of Dakshineswar, Kolkata.

The first modern reference to the village is found in the Bilaspur district gazetteer of 1910. It tells the village had an old Devi temple of which only two ornamental doorways had survived. A hut, housing a few images, was built on the site. One image of Mahishasuramardini was under worship, and the other sculpture was of a seated Jain figure. J F Blakiston, the assistant superintendent of the Eastern Circle of the Archaeological Survey of India (ASI), visited the village in 1914-15.2 He did not improve much from the last published account except mentioning that the remains were eminently worthy of preservation as these were of very early date. He assigns the date of construction not later than the 8th century CE. After his recommendations, conservation works were taken up by the ASI Eastern Circle, and these were completed in 1923.3

Ashtabhuji Temple – The temple has survived only in parts with its stone platform, two doorways, and a detached Nandi-mandapa. In its original design, it was composed of a garbha-grha, antarala, mandapa, a mukha-mandapa, and a detached Nandi-mandapa, all constructed on the west-east axis, the temple facing west. The Nandi-mandapa has survived in a fair state of preservation with its pillars and lintels, the roof above has not survived. This mandapa was approachable from all four sides and had an open but covered pradakshina-path (circum-ambulatory passage). A monolithic statue of Nandi is installed in the center of the mandapa. A statue of Shiva-Nataraja is placed over the pillar of the pradakshina-path near the main entrance. The temple garbha-grha had a true stellar plan, on inside as well as outside. This stellar plan had eight offset angles, seven angles uniformly distributed over its external surface and the eighth offset angle utilized for the entrance to the garbha-grha. The mandapa was built on a square plan with entrances on its lateral sides. It was preceded by a mukha-mandapa with the main opening in the east.

The doorway of the mandapa is not embellished with sculpture but contains only general decoration of chandra-silas and pillar constituents. The antarala doorway is exquisitely carved with various sculptures. It is composed of two shakhas (bands). The outer shakha is adorned with life-size sculptures of Ganga and Yamuna standing over their respective mounts, makara, and tortoise.  Above Ganga is a panel housing a gandhrava-couple and the panel above Yamuna has a solitary gana. The inner shakhas have Shiva-pratiharas (dvarapalas/door guardians) at the base and above them are placed nagas holding their hands in anjali-mudra. The tails of the nagas rise up going all the way up culminating in the center of the lintel where it is held by Garuda. The inner face of the doorway is carved with floral designs and a purna-ghata design at the base. The lintel above the doorway has Shiva and Parvati in the center accompanied by flying vidhyadharas on either side. At the left terminal is Kartikeya while the right terminal panel is now broken however in the past it has an image of a gandharva-couple.

There are many fragments and loose sculptures lying around the complex. In one lintel fragment, we find Brahma in the middle with Saraswati on his right and Shiva on his left. The image of Shiva is partially survived and this lintel appears to be part of the doorway with the depiction of Shiva in the middle and Brahma and Vishnu at either end. The life-size sculpture of the river goddesses reminds us of the Indal Deul at Kharod, however, the sculptural style there is very different. Though the temple now is dedicated to a goddess, however, originally the temple was dedicated to Shiva as evident from the shivalinga installed inside the garbha-grha as well as the presence of Siva and Parvati over the lintel of the garbha-grha doorway. The temple is a masterpiece among the stellate temple of Chhattisgarh as it introduces many new innovations. First, it is a true stellate plan, inside and outside, with eight oblique angles. Second, it has a square mandapa and a preceding mukha-mandapa, the latter was not found in early temples. Third, it has detached Nandi-mandapa, also not seen in earlier temples. As we do not find any remains of bricks at the site, this temple was wholly built in stone. The temple represents the phase when building materials such as brick and stone with brick used in earlier phases of temple building were replaced wholly with stone. Krishna Deva4 assigns the temple to 700 CE and this gets support from the copper-plate grant of Nannaraja II found in the village. The rule of Nannaraja II may be placed safely to the early 8th century CE. However, judging from the advanced interior stellar plan and added structures such as mukha-mandapa and Nandi-mandapa as well as the construction fully in stone, Stadtner5 takes it as a later development posterior to the Andal Deul and Rajiv Lochan temples, thus he assigns it to the 9th-10th century CE.