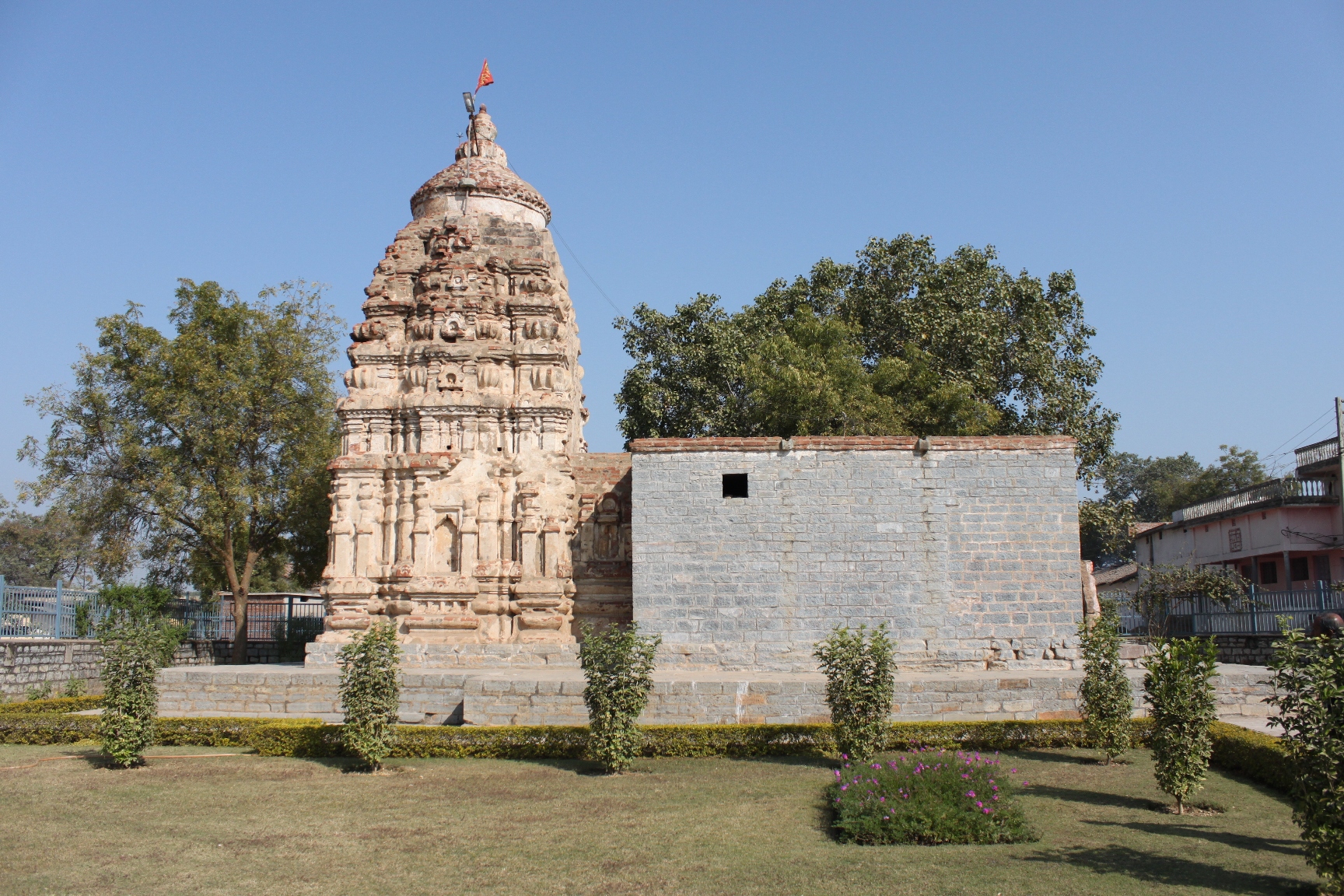 Kharod is a small town in the Janjgir-Champa district of Chhattisgarh. Its earlier name was Indrapur and it was established by Indrabala who also constructed a Shiva temple in the town.1 The earliest modern reference of the village appears in the reports of J D Beglar2 who visited Kharod in 1873-74 and described its antiquities. He mentions a legend behind the etymology of the town telling the town was named so being the residence of Khara and Dushana, the two brothers of Ravana. He also mentions another local tradition ascribing the temples at Kharod to king Ashwadhwaj, the brother of king Tamradhwaj of Ratanpur. The next account of its antiquities was from Henry Cousens in the annual report of the western circle of the Archaeological Survey of India.3  A H Longhurst4 included the temple at Kharod in his essay on the brick temples of central provinces. The village would have been an important political center between the 6th and 12th century CE as reflected in various copper-plate charters issued from here and the antiquary remains scattered around the village.

As per the earliest available epigraph, the antiquity of the village can be placed to the sixth century CE, during the times of the Panduvamshis of Kosala. The inscription refers to Isanadeva, an early Panduvamshi king, so the town would have been under them before Tivaradeva conquered Sripura (modern Sirpur) from the successors of the Sarabhapuriyas.

Monuments – Kharod is known as the Kashi of Chhattisgarh because of its numerous Shiva temples and a Shaiva math. Shiva is worshiped in his huge form as Dulhadeo in the village temple along with the gramdevi Kankalini, a form of Parvati.5 Indal Deul (Andal deul) –This temple faces west and is built over a 4 feet high platform, the latter is reconstructed with plain stones. The platform and the entrance doorway of the temple are built in stone, and the rest of the temple is constructed in bricks. The temple is survived with its garbha-grha and it appears that there was no antarala or mandapa attached to the temple. Presence of a few protruding beams in the front suggests that there was once an ardha-mandapa (porch) in front of the temple.6 The temple is built in sapta-ratha pattern carrying seven offsets, central bhadra, corner karnas, pratiratha and pratikarna in between the former two. The garbha-grha is a square inside and the outside it takes a stellar (star-shaped) form. Similar to Rama Temple at Sirpur, the stellar plan of this temple does not reflect a true star pattern with all its offsets in oblique angles, The bhadra and karna offsets are parallel with the major axis, while the pratikarna is in oblique.

The elevation has five sections, vedibandha, jangha, baranda, sikhara and mastaka. Vedibandha is composed of five regular moldings. The Bhadra projection has a large niche enclosed within two pilasters. On either side of the pilasters are placed simhavyalas with a rider. The iconographic program on the south wall has Ganesha in the west karna and Kubera in the east karna and a damaged ten-armed image in the bhadra. The image in the bhadra  niche is identified as Durga.7 On the eastern wall, the icon inside the bhadra niche is a damaged sculpture of standing Surya while Vishnu riding over Garuda is in the south karna and Indra with Shachi riding over elephants is in the north karna. Images in the northern wall include Kubera in the east karna, and Ganesha in the west karna while the image in the bhadra niche is very much damaged survived only with its lotus pedestal. This damaged image may be identifiable with Brahma or Lakulisa.8 The image of Ganesha on the west karna appears recent as it was not mentioned in the past accounts and its execution and color is very different from the other images adorning the walls. Stadtner9 mentions the entire north side had been deteriorated badly and the images over the karna were indistinct. Shikhara has survived only till three stories, originally it appears to have four stories. Each story is demarcated with bhumi-amlakas on the karna-ratha. The bhadra on the shikhara has four niches rising in succession. Inside these niches are installed various images. Images in the south are better preserved, in the ascending order these are, seated Gaja-Lakshmi, seated Vishnu, a two-armed seated figure and a bust of Shiva. In the east, in ascending order, are seated Narasimha, a seated two-armed figure, Shiva-Mahesha-murti with three heads, and a bust of Shiva. All the images in the north, except a bust in the top niche, are damaged. The garbha-grha doorway has three shakhas (bands). Innermost shakha has scrolls, the next shakha has diamonds and the last shakha has large figures of river goddesses, Ganga over makara and Yamuna over kachhapa (tortoise). On the lalata-bimba over the door lintel is placed Shiva and Parvati, accompanied with Brahma and Vishnu. Presence of the remains of stucco and the condition of survived images suggests that the images were finally done in stucco, images were done in its basic form in bricks and later the finer details were done in stucco. Based upon its advanced stellar plan and exterior embellishment in comparison to the Rama Temple at Sirpur, the temple is assigned to the second half of the 7th century CE, Krishna Deva10 dates it to 650-675 CE and Stadtner11 to 650-60 CE. Shabari Temple – Similar to the other brick temples of Chhattisgarh region, this temple is also built in brick except its jagati, doorframe and amalaka. The temple faces east and is built next to an ancient tank. It is dedicated to Shabari and inside the garbha-grha is installed an image a female deity whose identification is not certain. The temple is built on a stone jagati (platform). It is composed of a garbha-grha, antarala and a mandapa, the latter is a modern reconstruction. This reconstruction probably took place sometime after 1904 when the mandapa was replaced with a modern stone wall.12 In his travel notes of 1907-08, Longhurst13 mentions the repairs attempted by the then PWD department were so ludicrous and gave an idea that it was personally superintended by the owners of the temple. Longhurst gave the instructions to the accompanying PWD officer to stop any further repairs to any building at Kharod. He further tells in spite of all the nice things Mr. Cousens has said about the two brick temples at Kharod, both are now far too decayed for any useful or practical repairs, and nothing short of rebuilding them would be of any use. The garbha-grha is square from inside, and on the outside it takes a sapta-ratha pattern reflecting a stellar plan. Its stellar plan is not a true star, like Indal Deul its bhadra and karna offsets are parallel to the main axis. The pratikarna and pratiratha are in oblique angles. 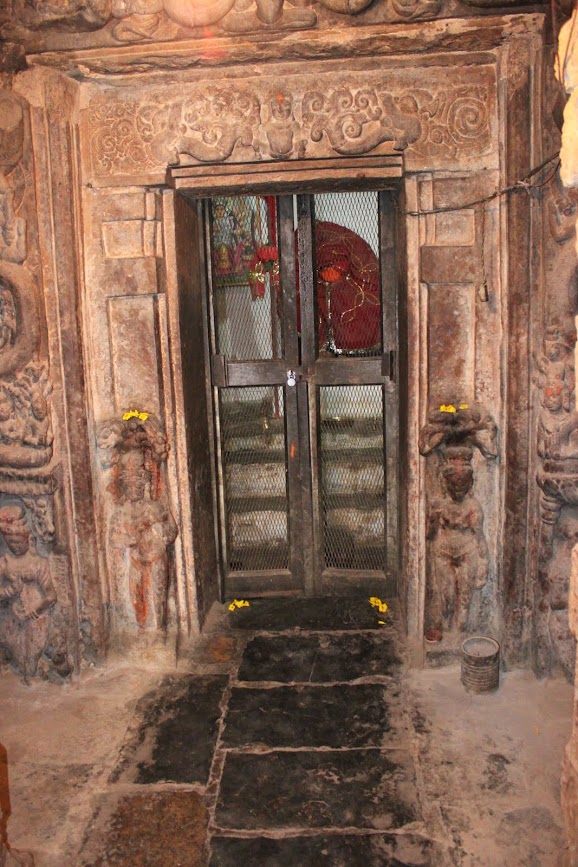 The temple elevation plan has five sections, vedibandha, jangha, baranda, shikhara and mastaka. The vedibandha has five regular moldings. The jangha has oblong niches on its bhadra. Shikhara has four bhumis, marked by bhumi-amlakas on karna-ratha. Mastaka has been renovated with all its elements, beki, amlaka, khapuri, kalasa and flag. The amalaka appears to be original while the rest are done during renovation. The sanctum door has the river-goddesses, Ganga and Yamuna, at the jambs. Their vahana (mounts) are much obliterated beyond recognition. On the lintel is shown Garuda holding the tails of serpents, various nagas are also shown with him. The dvarpalas (guardians) are present within a niche on the door-jamb. The mandapa is supported on two rows of pillars, six pillars each. These pillars are carved with images, however the images are much damaged. Many standalone images are kept inside the mandapa, these images were supposedly taken from other different temples. These life-size images adoring pilasters reminds us the Rajiv Lochan temple at Rajim. Krishna Deva14 assigns the temple in the second half of the 7th century CE on the basis of its poor workmanship and degradation in style, while Stadtner15 puts it to the turn of the eight century CE as he sees borrowing of some earlier features. Patnaik16 agrees with Stadtner and tells as the temple showcases various stylistic degradations therefore it must be postdated to the Andal Deul and can be assigned to the first quarter of the eighth century CE. Lakhneshwar Temple – This is the most important temple at Kharod for its religious character. A legend tells that Lakshmana who installed a linga and worshipped Lord Shiva for his blessings. A temple was constructed to commemorate this and named after Lakshmana.17 Another legend mentions that Lakshmana installed one lakh (100,000) lingas here and the temple was named Lakshalinga (लक्षलिंग) that later got corrupted to Lakhneshwar (लक्ष्णेश्वर).18 The temple has been heavily repaired, renovated and reconstructed that it ad lost its original character. Longhurst19 visited the temple in 1907-08 and mentions the work of whitewashing the interior together with one of the old inscription had just been completed and he was informed that such whitewashing is done every three years. He also mentions about the difficulties of removing the whitewash from the inscriptions as sometimes the coating is about a quarter of an inch thick. A high wall over the mandapa around the temple has been constructed that hides the temple from the outside leaving only the shikhara part exposed. 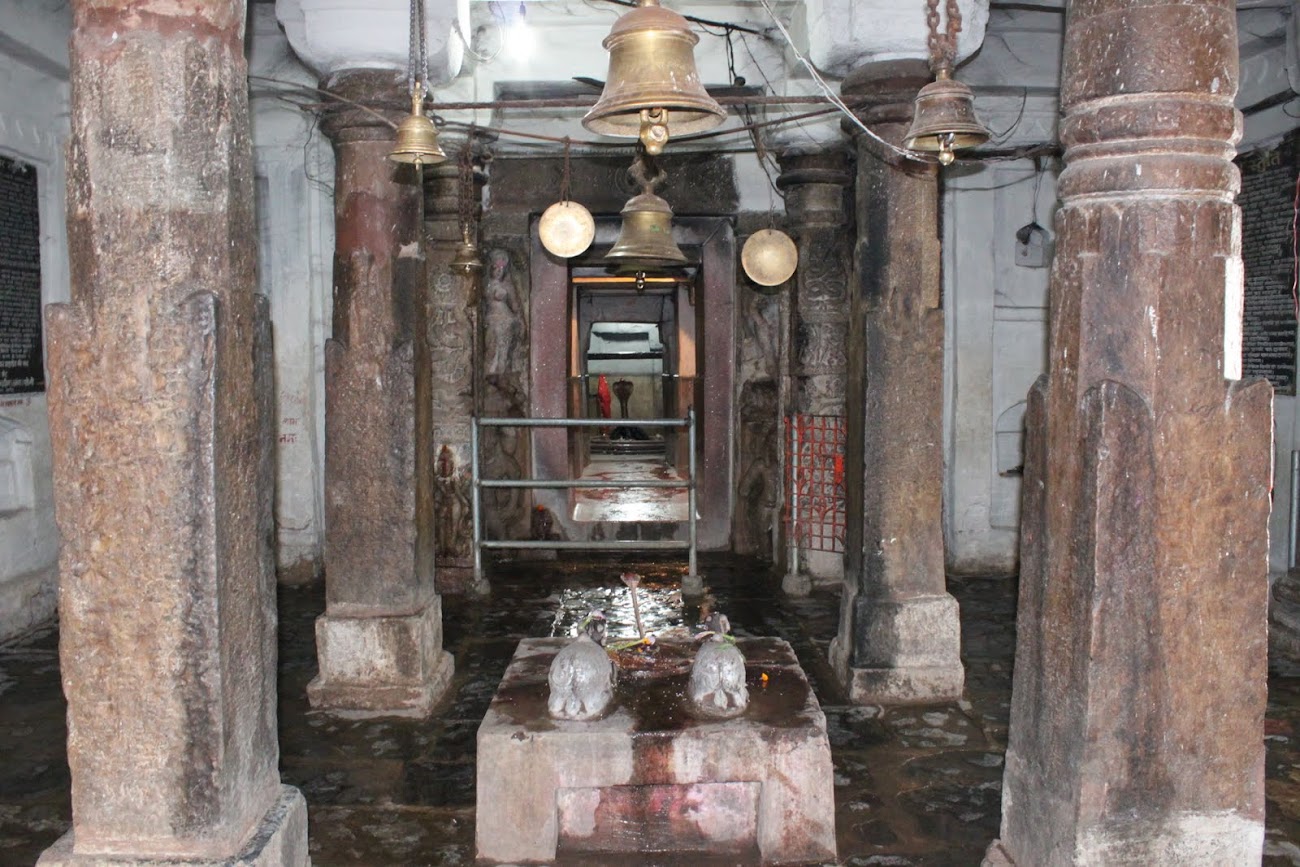 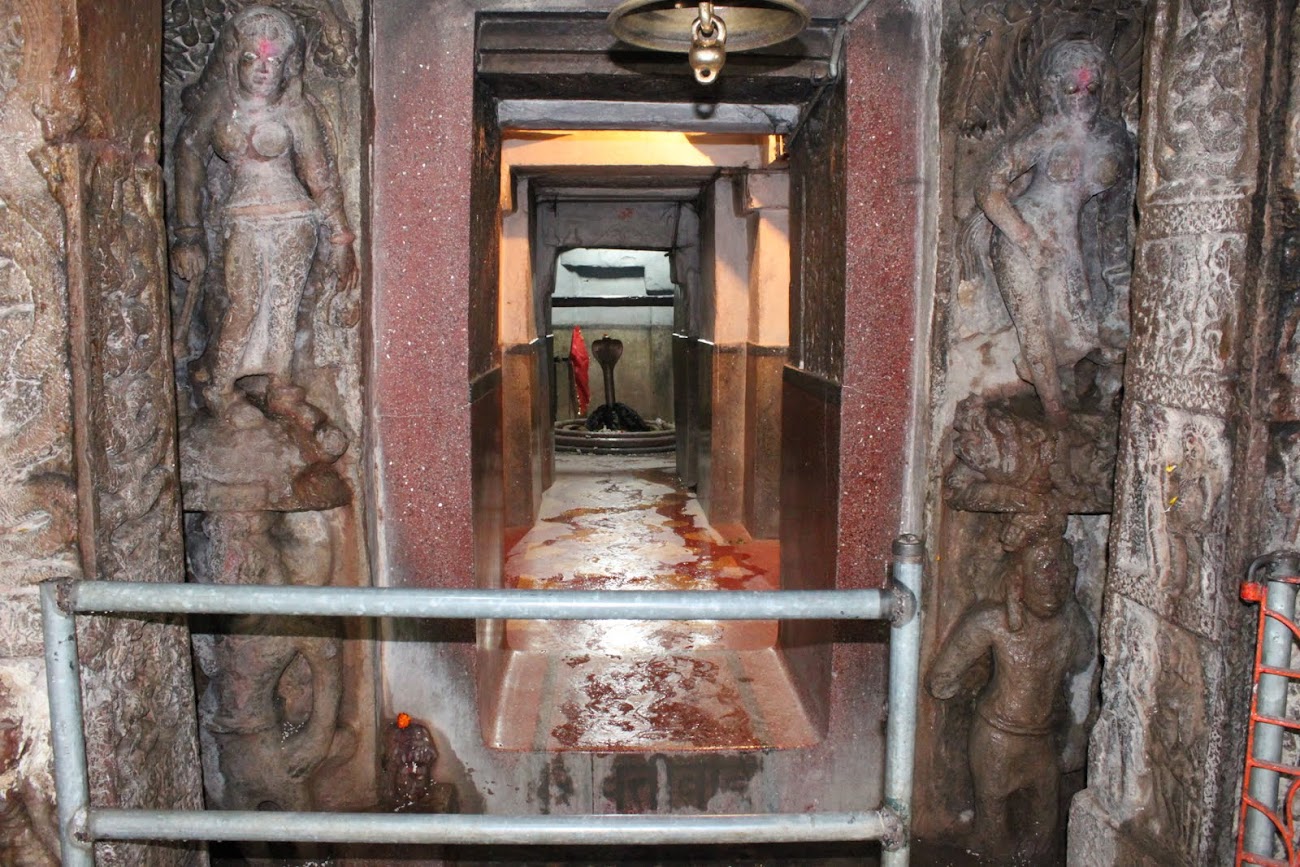 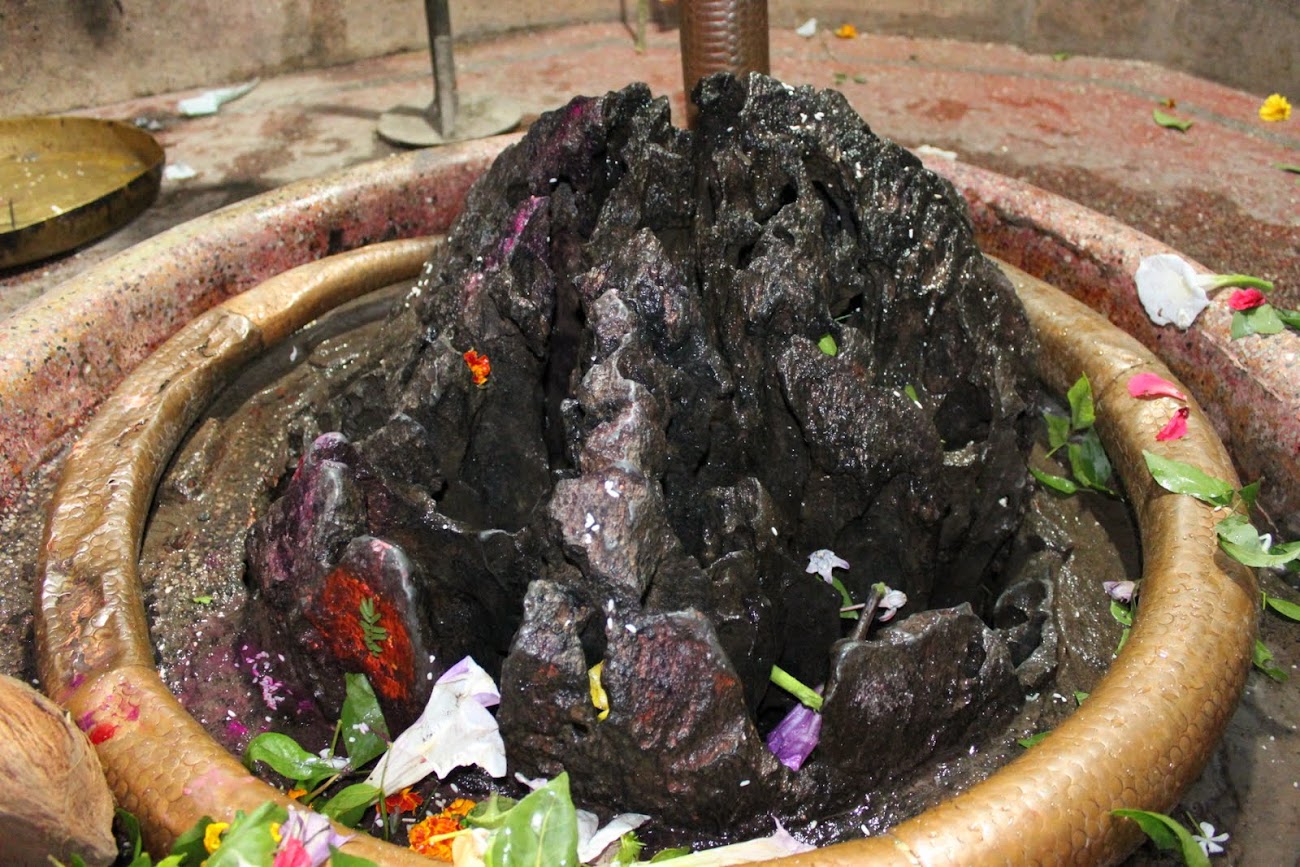 The garbha-grha doorway belongs to the original temple that once stood here. On the upper part of the door jambs are the life size statues of the river goddesses, Ganga and Yamuna. Below them are depicted dvarapalas. The mandapa is supported on rows of pillars and the pillars are carved with various images, Ardhanareeshwar, Varaha, Vishnu-Trivikrama,  and Ramayana scenes. Though the mandapa is fairly renovated however these few decorated columns belong to the original structure. There are many legends and traditions attached to the linga enshrined inside the garbha-grha. One legend states it has one lakh (100,000) holes and one hole, called Akshaya-kund, always retains water in it. The water in this hole is considered sacred similar to the water of the Ganges.20 Another tradition tells one hole in the linga is connected to the nether world and whatever amount of water you pour it does not spill over. One more legend explains when Rama & Lakshmana were returning to Ayodhya, Lakshmana got a leprosy attack and fell down at this spot. He made one lakh shiva-lingas and worshiped Shiva, the latter appeased with his worship and cured him. It is assumed if you offer one lakh rice-grains then all your wishes will come true. About the metal naga around the linga, Longhurst21 tells it being very beautiful and accurate model of a cobra with expanded hood and protruding tongue, poised over the linga as though guarding it. He estimated the overall length of the naga with its coil to be around eight feet and thickness equal to a man’s wrist. It was made of solid copper and the scales on the body and other details are wonderful and quite most realistic thing in metal work he had seen.