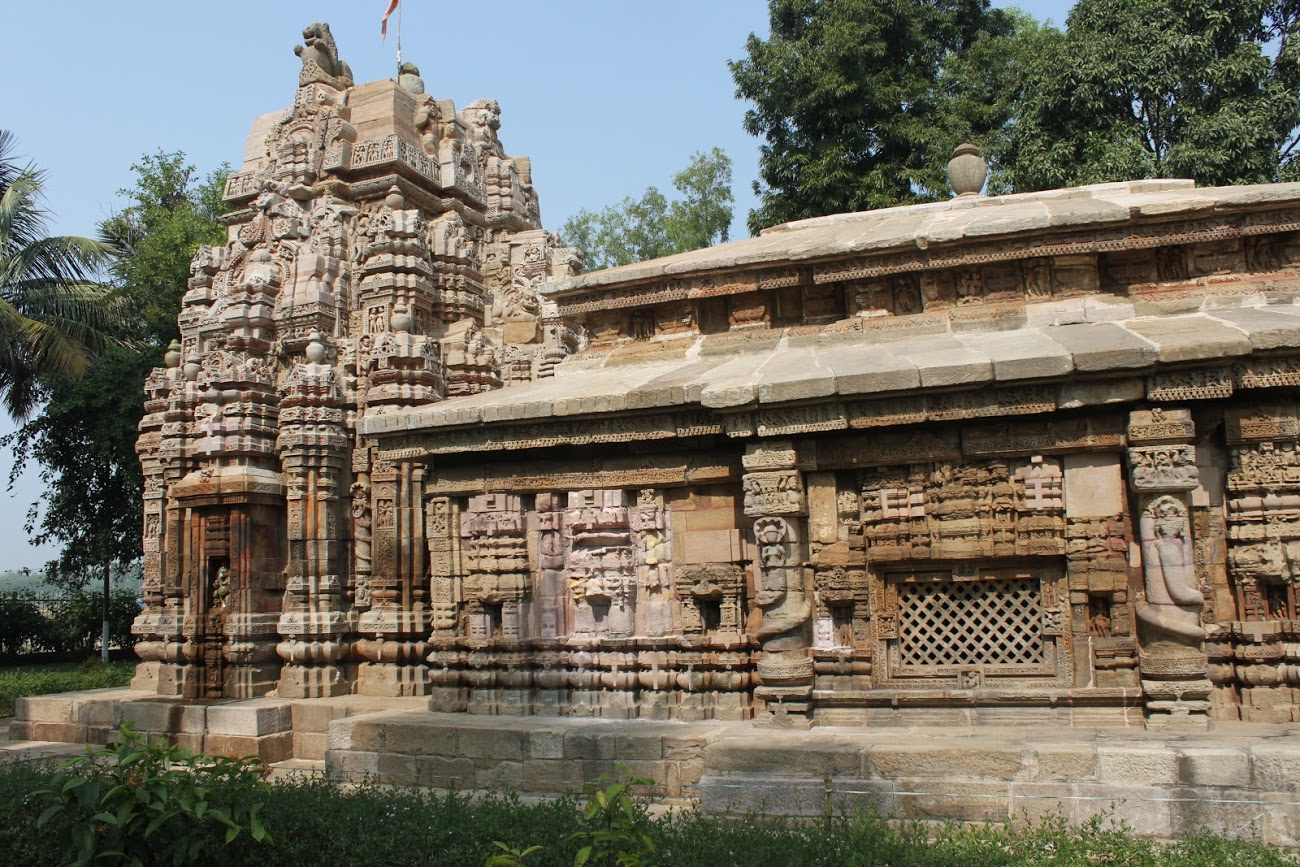 Varahi is the female counterpart of Varaha, the boar incarnation of Vishnu. She is one among the Sapta-matrikas group, the heptad or seven divine-mothers. The others in the group are Vaishnavi, Maheswari, Brahmani, Indrani, Kaumari and Chamunda. Devi Mahatyma of Markandeya Purana explains the origin of the Sapta-matrikas that they came out of the bodies of their respective gods to help the Devi in her battle with Shumbha-Nishumbha. Thus, Varahi came out of the body of Varaha, wielding chakra (discus) and sword. Various other texts, i.e. Matsya Purana, Varaha Purana etc. explain different origins for these matrikas, however all agree on the fact that they appeared to help the Devi fighting demons. 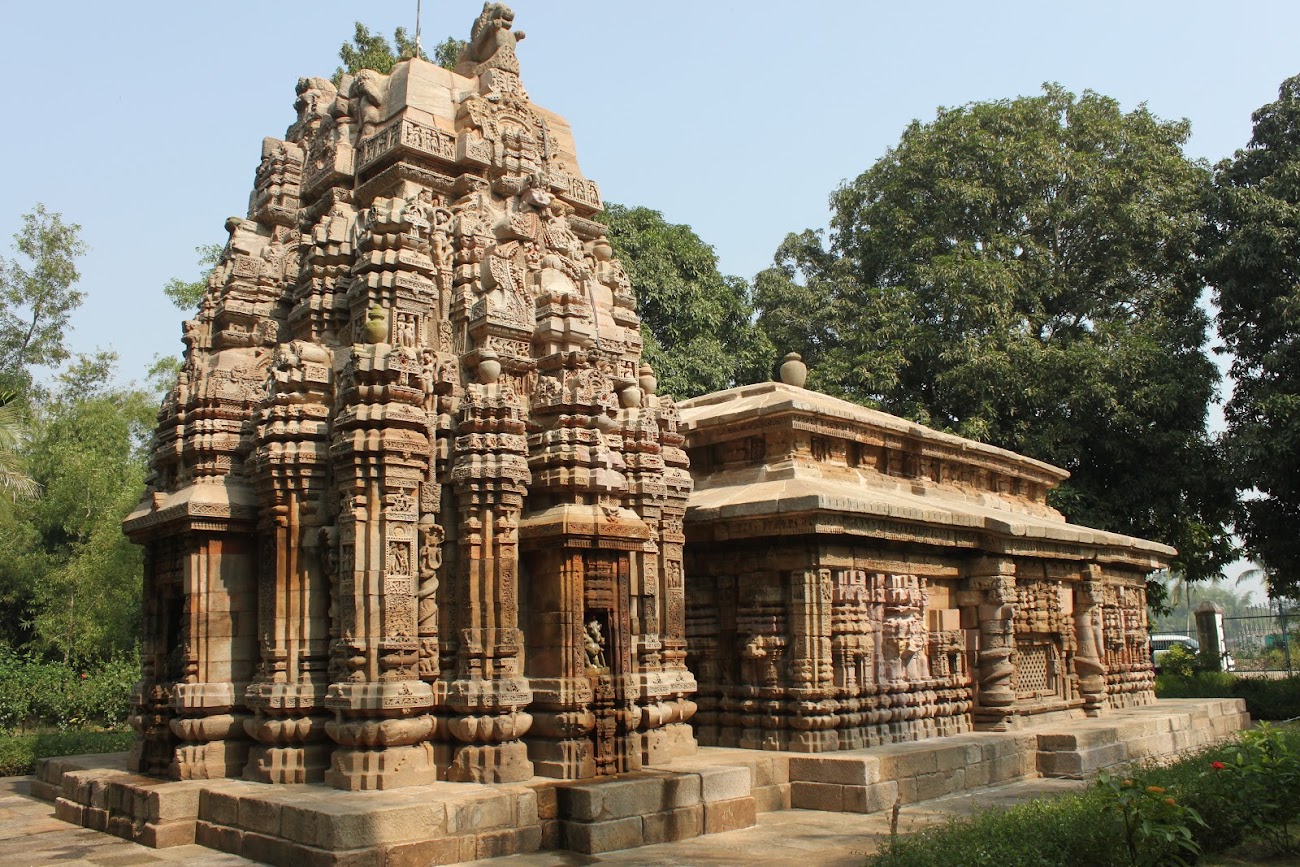 Usually the Sapta-matrikas are worshiped in group except for Chamunda who is also worshiped in her standalone form. There are many temples dedicated to Sapta-matrikas. They are also depicted as subsidiary deities over the external niches or over the door lintels. There are very few temples dedicated to Varahi therefore the temple at Chaurasi holds an important place. Finding of a mound of a ruined temple with an image of Chamunda placed over it, in vicinity of Chaurasi, led Debala Mitra1 to suggest that it is not likely that the Chaurasi temple is the sole surviving member of a group of seven temples in the region, each dedicated to one of the matrikas. 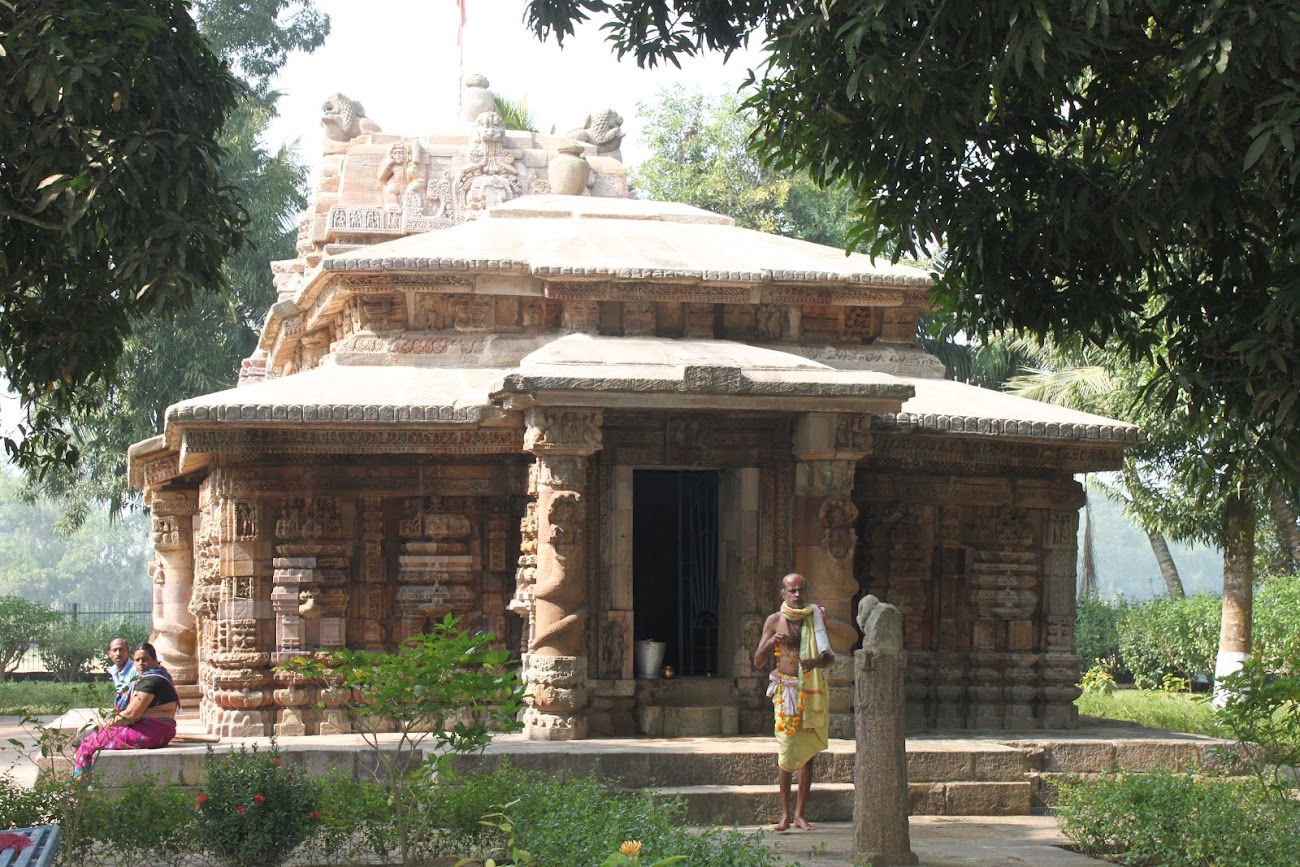 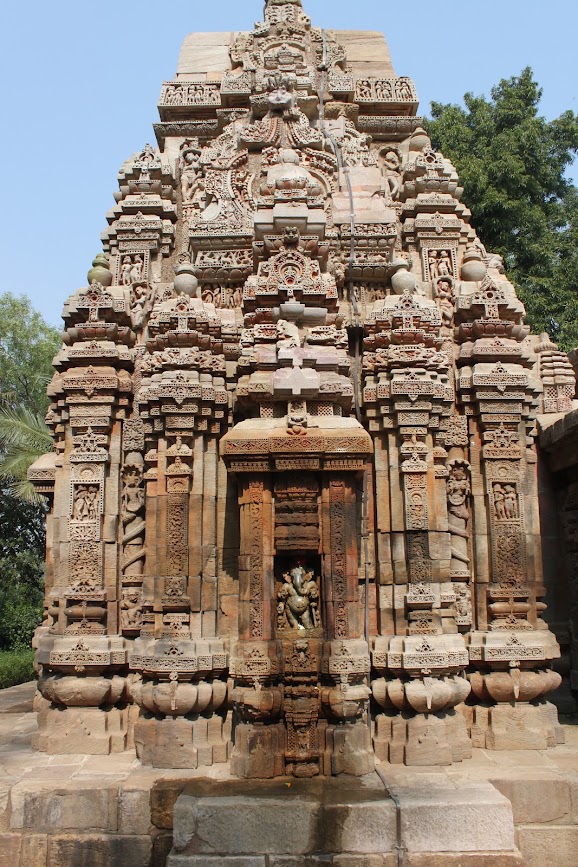 The Varahi temple is among very few khakhara temples found in Odisha. Khakhara temples are generally constructed to enshrine a shakti or a female deity. Among other famous khakhara temples are the Vaital Temple and Gauri Temple, both in Bhubaneswar. Boner2 tells that the perfect example of the temple, construction of which is described in the Silpa Prakasa, is the Varahi Temple at Chaurasi belonging to the kamagarbha type. Boner visited the temple in 1958 and mentions it was in very precarious state of preservation though still used for worship. However, soon the temple was undertaken by ASI (Archaeological Survey of India) and was put to proper repairs resulting in its present glorious form. 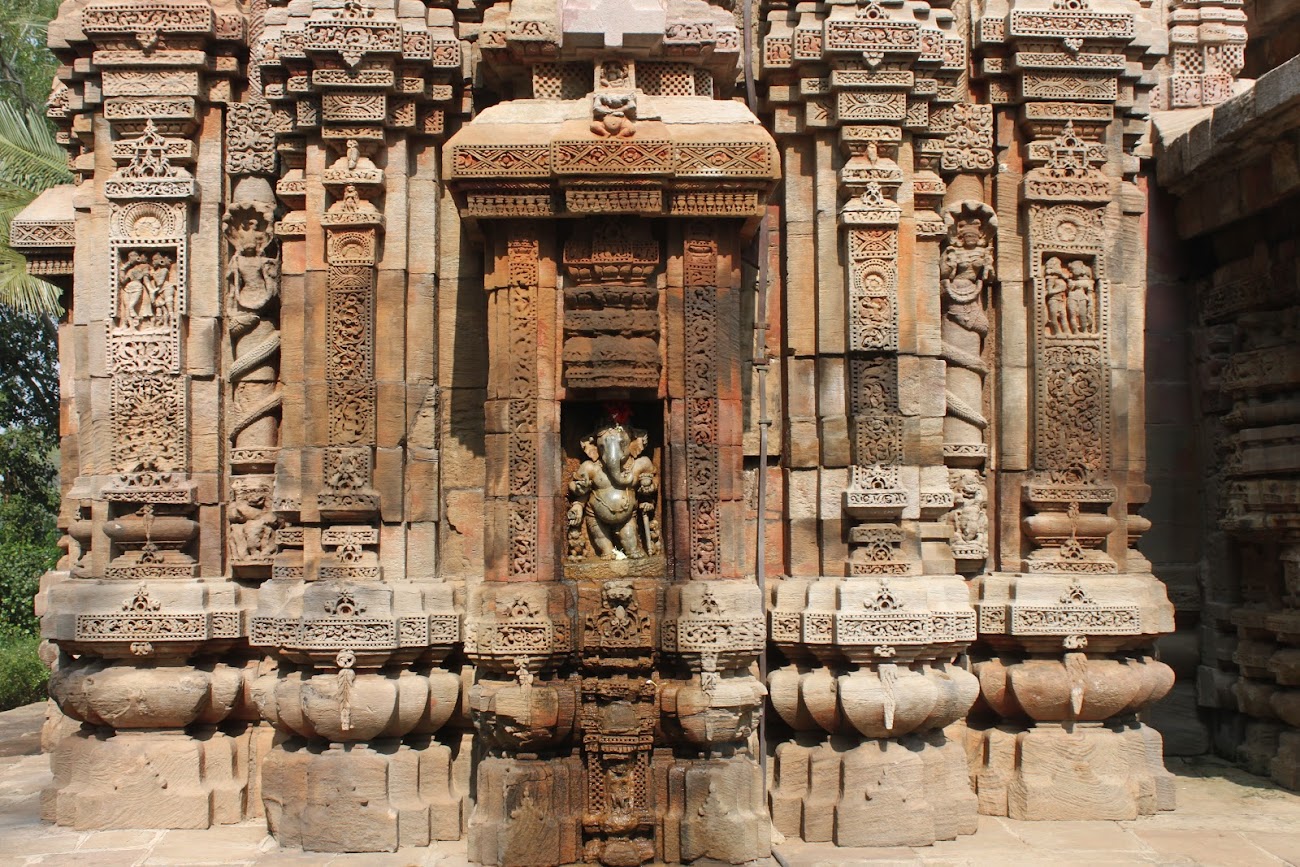 The temple consists of a deul and a jagamohana. It stands on a pitha (platform) which follows the pattern of the deul standing above. The deul is constructed over a rectangular plan in pancha-ratha pattern. It is topped with a khakhara roof, the total height rising to 25 feet. Deul is composed of pabhaga, jangha and baranda. Pabhaga is made of three mouldings. Jangha has five projections, central raha-paga, corner kanika-paga and intermediate anartha-paga. Kanika-paga constitutes a pilaster decorated with scroll-work topped with a shallow niche adorned by a mithuna image. Anartha-paga also has scroll-work, in the west it has a niche above scroll-work while in the south and north no niche is provided. 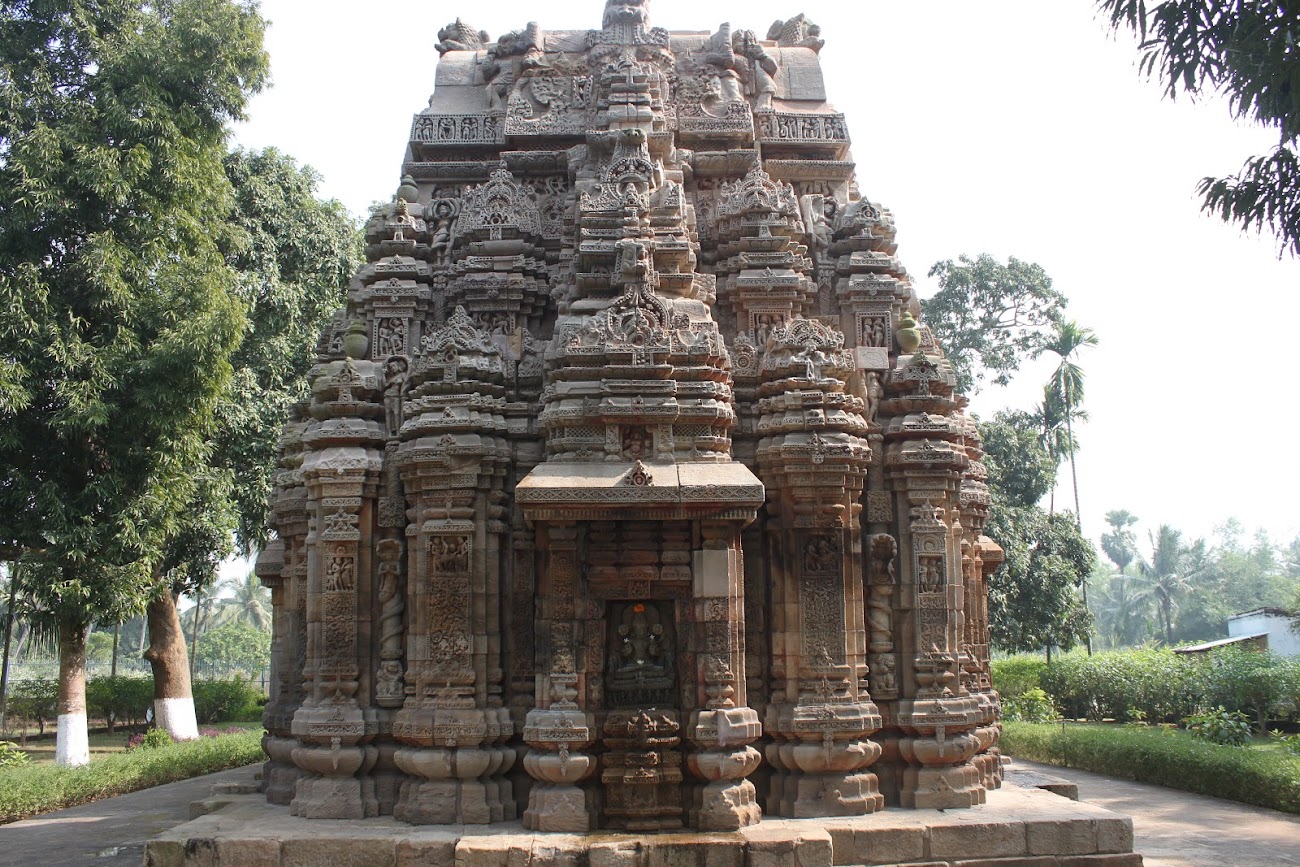 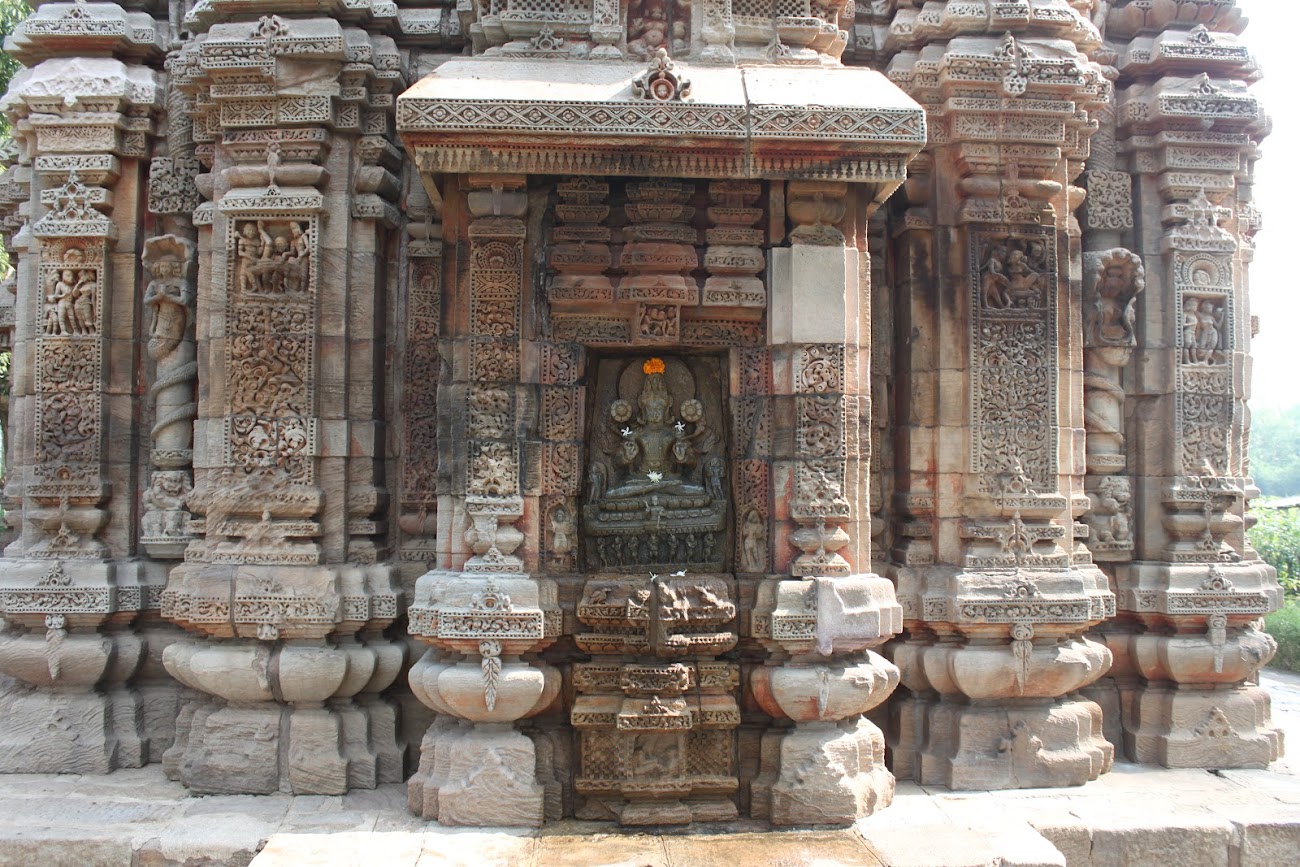 Niches on kanika on all sides and anartha in the west contains mithuna images of particular interest. These eight erotic panels are tentatively identified by J N Banerjea3 as astakamakalaprayoga, the practice of eight types of kamakala as defined in fourth patala of an unedited Sanskrit text Kaulchudamani. In the first three scenes, beginning on the south, the Vira ‘Kaula Sadhaka’ and the Kumari ‘his shakti’ or Uttara Sadhika are depicted standing side by side in suggestive poses and representing vasikarana (bringing sadhika under control), sammoha (enchanting her) and akarsana and uccatana (attracting and preparing her for ritual sex). In the next two scenes are shown yoniabhisheka and purascarana, the preliminary stages of the act. An attendant figure is introduced behind the sadhika, probably representing Krcchra or Uttara-sadhika, whose presence is necessary in the performance of such tantric acts. Next scene should represent rajapana (drinking of rajas) however it appears to be a depiction of fellatio. Last two scenes are probable depicition of prastava and nivrti, the final stages of the ritual where the participants come back to their normal state. There are also four more panels in the east, taking the count to overall twelve panels. Dahejia while agreeing to their identification with ashtakamakala depiction says that the panels are placed in wrong order. Count of total panels to twelve, missing rajapana panel, male person in one panel carrying khatavanga suggesting kapalika association leads to suggest that these panel probably do not represent the ashtakamakala of Kaula practices however they may be associated to some tantric rituals involving sexual union. 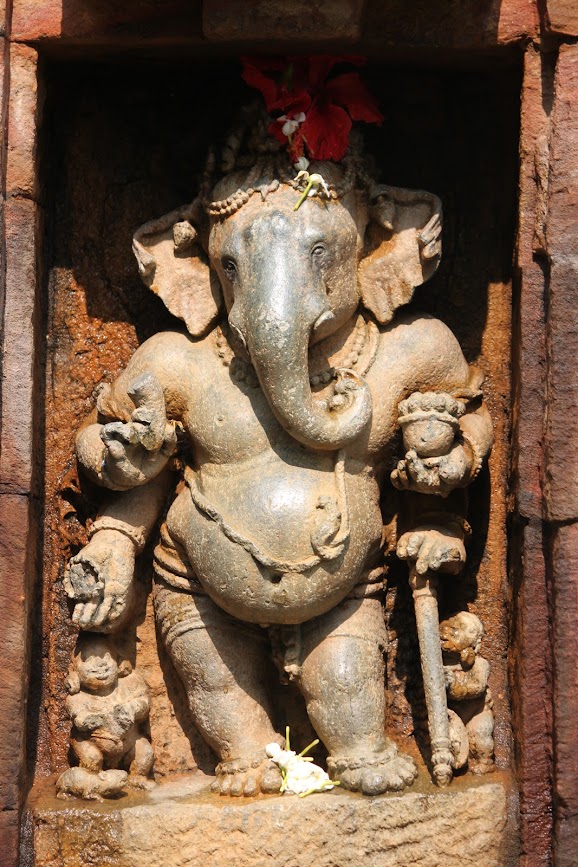 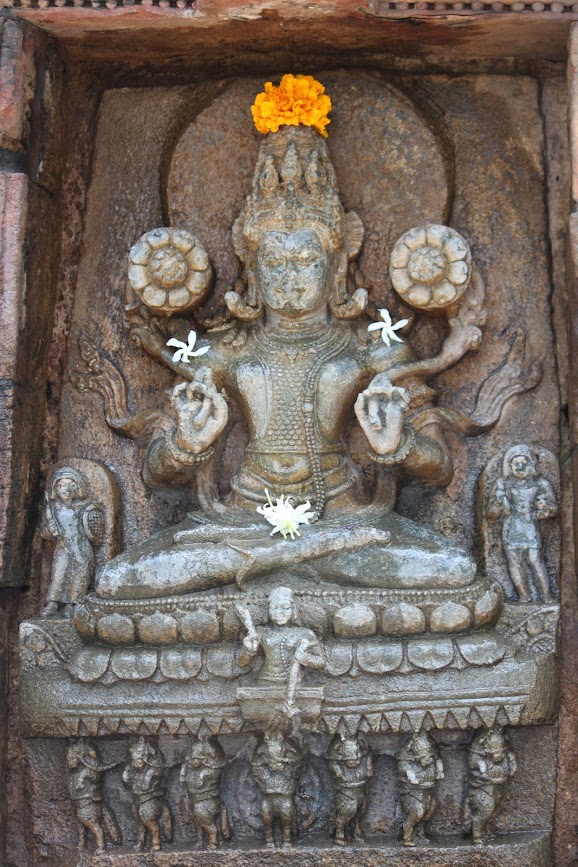 Recess portion between kanika and anartha is filled with naga-stambhas resting on top of a gaja-kranta motif. The naga-pillars in the recess is the first occurrence of this motif in Odishan temples. Nagas are shown entwined around the pillars, moving upwards with their tail below. Raha-niche in the south and the west have their parshva-devatas in situ, Ganesha and Surya respectively. Usually in a shakti temple, the parshva-devatas represent the different forms of the enshrined deity, which is not the case here. Boner4 explains that Silpa Praskasha does not mention names of the parshva-devatas for a shakti temple. However, she derives certain explanations for the existing parshva-devatas. Boner tells that Varahi in this temple is consecrated representing the jnana-aspect of the Devi. Ganesha, in the south, may be invoked to help in removing the veil of ignorance that obstructs the light of jnana. Surya, as the principle of light, of illumination, is obviously a complementary aspect of Jnana-devi. His are the darkness dispelling rays, just as Varahi is one of the raya of Mahatripurasundari, the supreme Shakti. The niche on the northern side is empty, however, it may have been adorned with an image of Bhairava, the male counterpart of Jnana-shakti. We also have a Surya image on a prominent front raha-niche of the Vaital temple at Bhubaneswar, another very important tantra shrine. Surya is the west niche is shown seated in his chariot, driven by Aruna and drawn by seven horses. Danda and Pingala are shown at the base of the chariot. They both are shown in a very foreign attire, Danda holding a danda and Pingala holding a pen and ink-pot. 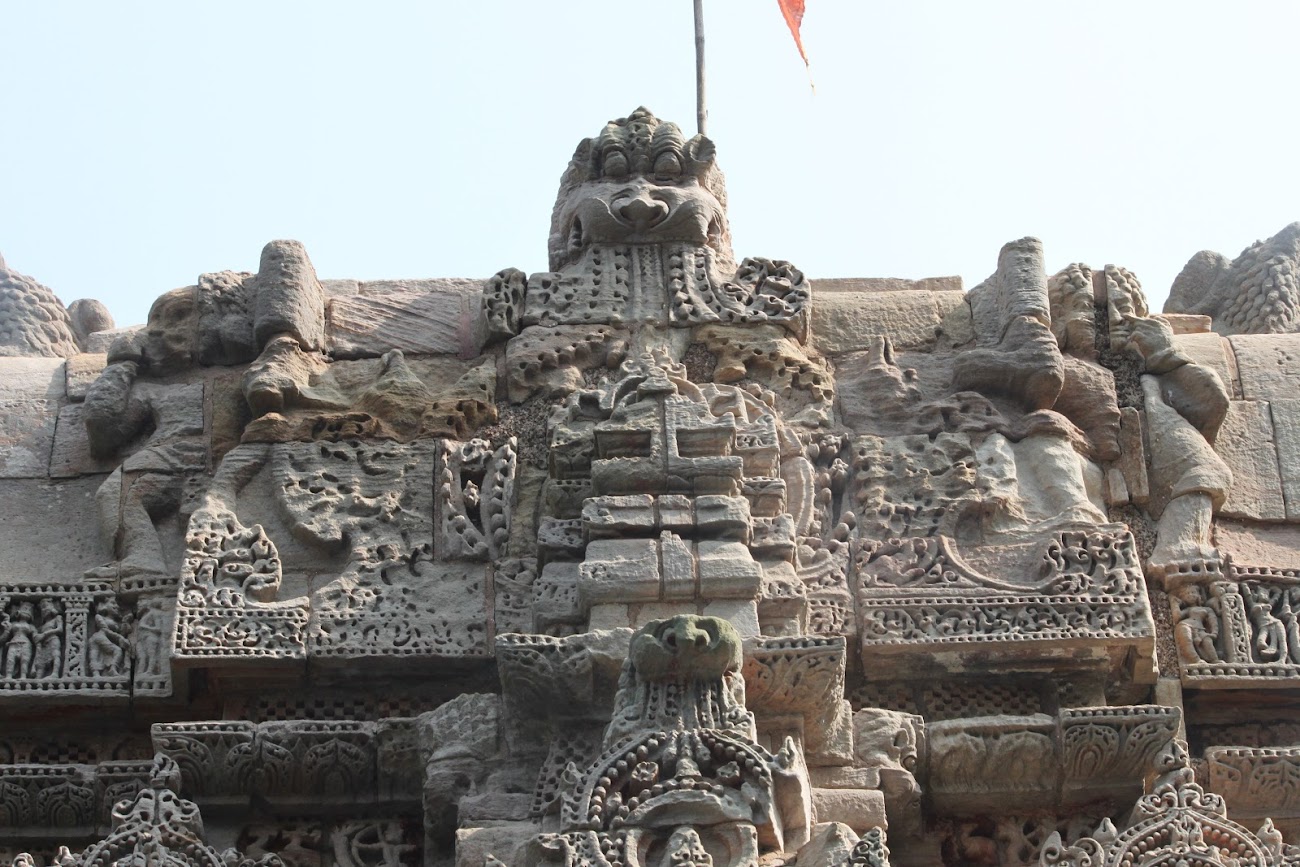 There is no separate baranda moulding, it can be taken synonymous with the first bhumi of the gandi or the top member of the bada. Gandi (tower) follows the pancha-ratha pattern of the bada below. Gandi is divided into two tiers, separated by a recessed kanthi. The kanthi is decorated with mithuna (amorous) sculptures. Shala-bhanjikas are placed on the recesses between kanika and anartha. A moulding separates gandi and mastaka. Mastaka is composed of muhanti, mukhata and kalasa. Muhanti, or lower edge of khakhara roof, is decorated with amorous couples or mithuna-images. Mukhata or the central portion is decorated with vajra-mastakas. Vajra-mastaka on the longer edges, in the east and the west, is accompanied with two dwarfs on either side, representing a bho-type vajra-mastaka. This is the first such occurrence of bho-type vajra-mastaka on the gandi. Kirti-mukhas of the vajra-mastaka on the north and south is replaced with udyata-lion. 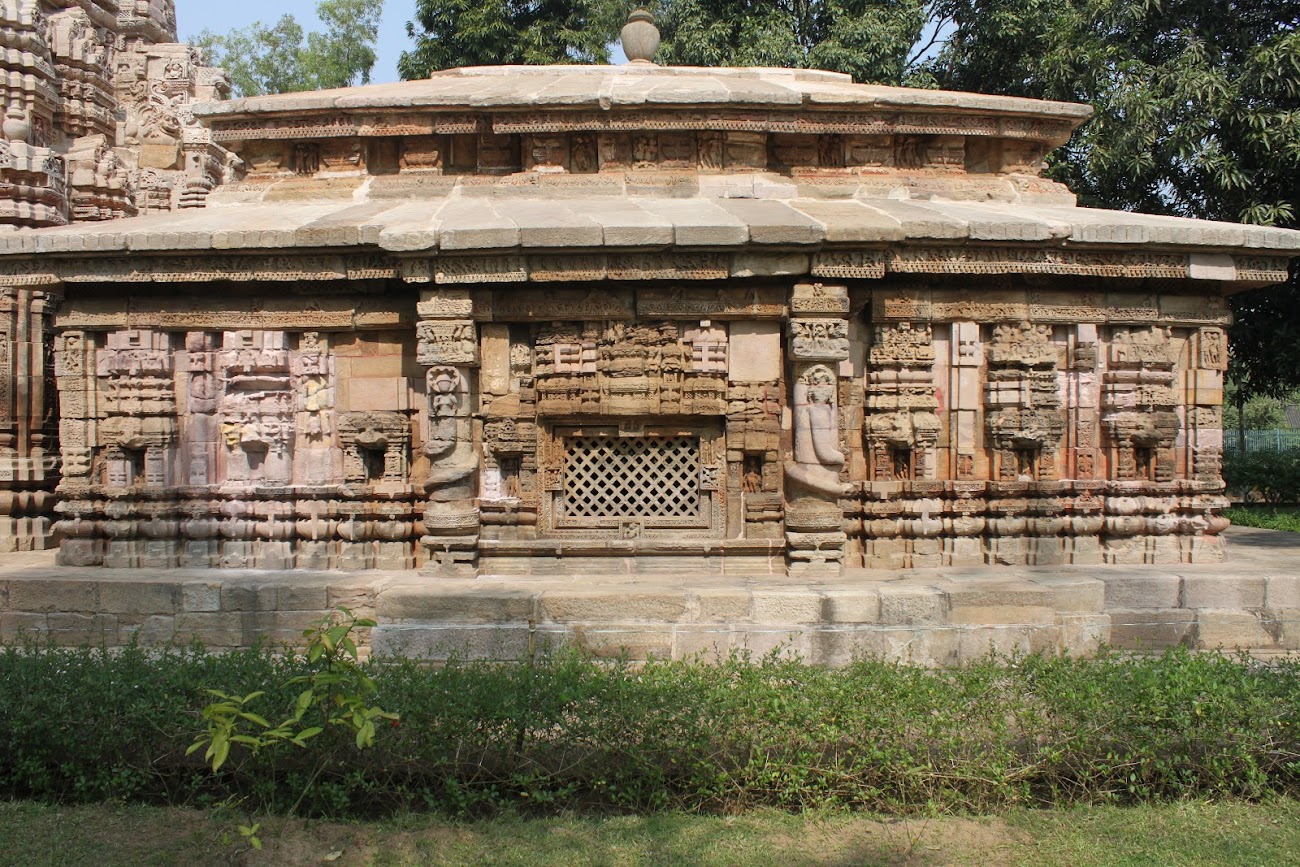 Jagamohana is constructed over an oblong plan in tri-ratha pattern. It is topped with flat roof of two tiers separated by a clerestory similar to the Parasuramesvara Temple. Bada is consisted of pabhaga, jangha and baranda. Pabhaga is made of four mouldings. The wide raha-niches in the south and north have naga-nagi stambhas at the terminals. The pilaster next has khakhara-mundis with a niche adoring four-armed images representing Mahavidyas. The Mahavidyas represent various stages and aspects of spiritual knowledge emphasizing the jnana-aspect of Varahi. Sandwiched between these khakhara-mundis is a large perforated latticed window exterior of which is carved with scroll-work with four insets, in the center of each side. The inset on the top has Gaja-Lakshmi, the insets on the sides have vidhyadhara couples, and the inset at the bottom has an unidentified figure seated in maharajalila-mudra. 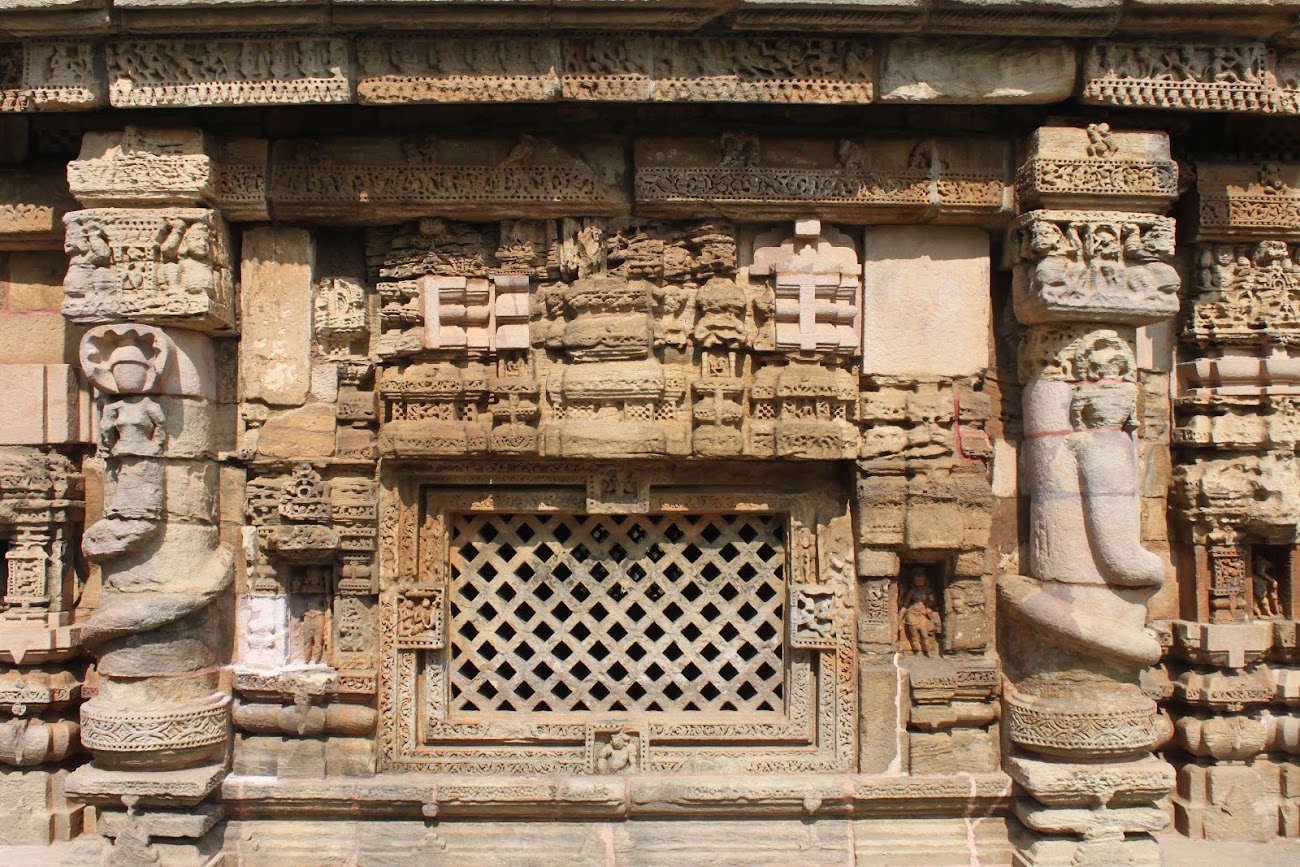 On either side of this raha-niche, three alternating pilasters are provided, each having a khakhara-mundi housing a niche. In these niche are placed dikpalas and their shaktis. Ganga and Yamuna adorn the niches on either side of the entrance to jagamohana. Baranda has a single moulding. Above it is a recess decorated with bharvahaka-ganas alternating with jail pattern. Above this recess is a projected moulding depicting Ramayana scenes. Among the Ramayana reliefs are found killing of Maricha where latter is shown as a deer, abduction of Sita, fall of Jatayu, uprooting seven trees by Rama, killing of Vali and building of bridge. The roof above has two receding slopes separated by a kanthi (recess). This kanthi is adorned with mithuna-images. A projected moulding above it is decorated with Ramayana reliefs. The upper story is topped with a large monolithic kalasa over a square pedestal. 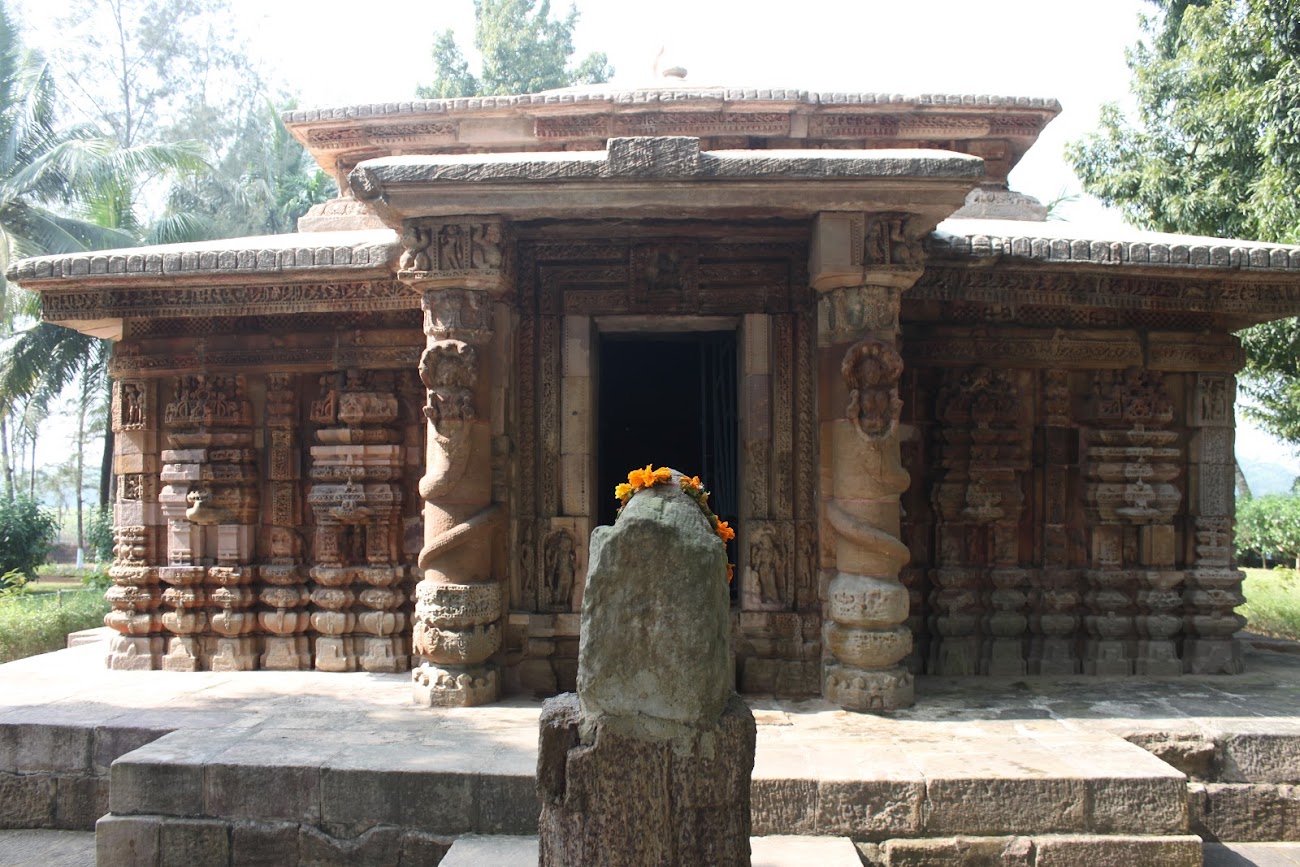 Entrance to the jagamohana is flanked with two massive naga-nagi stambhas (pillars) on either side. These are topped with a bracket depicted with bhara-vahakas (weight-bearers) at the corners. These brackets support an overhanging cornice. Doorframe has three bands decorated with different scrolls. Dvarpalas are present at the base in a niche occupying space of two bands. They are female dvarpalas with four hands, one holding a rosary and another a trident. A niche next to dvarpala niche, occupying space of the external most band, has a figure of standing naga, one hokding a garland and another a water-pot. Gaja-Lakshmi is present over the lintel. A yupa in front further corroborates the tantric character of the temple.

Doorway to the sanctum also has three bands. At the door jambs are placed female dvarpalas, both having two hands and pot-belly. In on hand they both hold a cup, and in another hand, one dvarpalas has noose and another has a mace. The niche next to dvarpala niche has a naga figures, both holding garlands.

The image of Varahi enshrined inside the sanctum represents her tantric form. Varahi Tantra5 mentions five forms of Varahi, Svapna Varahi, Canda Varahi, Bhairavi (Mahi) Varahi, Krcca Varahi and Matsya Varahi. The image of Varahi matches with the description of Matsya Varahi, where she is shown with three eyes and two hands. She is holding a fish and kapala in her two hands. She is seated in lalitasana-mudra with her right foot set over her mount, buffalo. She has a big belly representing holding the universe inside her womb.

Two more images of Varahi are placed in jagamohana, in the both she is shown seated in ardhaparyanka-mudra. One image has two hands holding a fish and a kapala and accompanied with her mount, naravahana. The other image has four hands holding kapala, fish, rosary and her fourth hand is in varada-mudra.

Dating – Mitra assigns this temple between the Parasuramesvara and Mukteshvara. Parida7 assigns it to later part of the 9th century CE while Donaldson8 assigns it to the first quarter of 10th century CE. Boner9 is of opinion that it belongs to a later date, nearer to the Konark temple, on the basis of its fluid and almost impressionistic decorative carving.