Tigwan (तीगवां/तिग्वान) (aka Tigawa of archaeologists and historians) is a small village in the Katni district of Madhya Pradesh. Based on its architectural antiquity, the place once would have held a considerable position. Alexander Cunningham1 visited the site in 1873-5 and mentions the name Tigawa means “three villages”. These three villages would be Tigwan, Amgawan (आमगाव), and Deori (देवरी), all located adjacent to each other.  Cunningham mentions finding remains of not less than 36 temples in the village, many of these were destroyed by the railway contractors who broke down these for ready materials for rail construction. He mentions three groups of temples, ones with dimensions 4 to 6 feet were constructed with three sides leaving the fourth side open, ones with dimensions 7 to 10 feet were constructed with a doorway on the fourth side, and the ones with dimensions 12 to 15 feet were constructed with a mukha-mandapa (portico) in the front. Tigwan was located on an ancient route connecting Bharhut to Tripuri via Tigawa and Rupnath. Being an important trade center on this ancient route, the town was fortified at a certain period and as evidence of the same, the fort of Jhanjhangarh was constructed here. 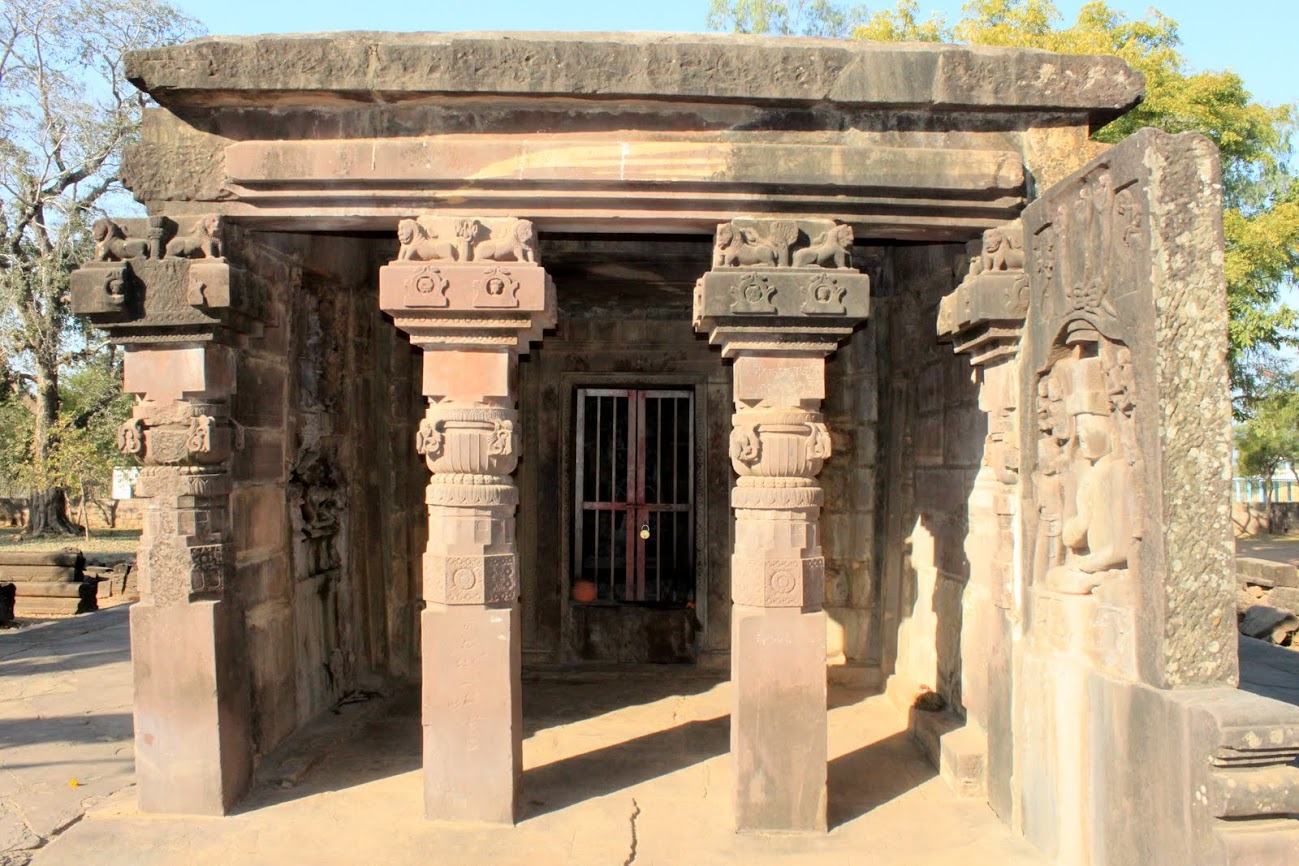 Kankali Devi Temple – This is the only surviving temple in the complex of around 36 temples, the rest had been demolished and materials were used for railway construction. The temple faces east and is composed of a garbha-grha and a mukha-mandapa, the latter is an open mandapa supported on four pillars. At some later point in time, the lateral open spaces were covered with a wall, and sculptures were installed inside. The garbha-grha is 12.75 feet square outside and about 8 feet square inside. It is covered with a flat roof. The pillars of the mukha-mandapa are heavy in appearance as their bottom part is plain octagonal. Above it is an octagonal section succeeded by a sixteen-sided section and then a circular section. Over the circular sections rests a purna-ghata (overflowing vase). Above it is a square abacus supporting a square capital. Each face of the capital is carved with two lions with a tree in middle.  The base of the capital has a design of two chaitya or kudu (dormer) with a human head inside.

The doorway of the garbha-grha has four shakhas (bands). Two shakhas have floral decoration and two are left plain. The side pilasters are of the same pattern as found in the mukha-mandapa. On the top of the pilasters are placed the river goddesses, Ganga on her makara and standing under a custard apple tree, and Yamuna on her tortoise standing under a mango tree. Both the river goddesses are shown plucking the fruits, thus they are a reminiscence of the earlier shala-bhanjika motif being merged with the river-goddesses iconography. The lintel is plain and the architrave above it has thirteen plain square bosses. Inside the garbha-grha is an image of Narasimha which belongs to the same period as that of the temple. However, it does not appear to be the mula-bera (main idol) of the temple.

Cunningham mentions four sculptural panels inserted in the lateral walls of this mukha-mandapa. However, now there are only two panels found on the south wall, one of Chamunda and another Sheshashayi-Vishnu. The panels of Kali and Varaha mentioned by Cunningham are no more on the lateral wall of this mandapa. It may be very probable that these panels are the ones now found in the debris and published below. A sculpture attached to the north wall of the mukha-mandapa has a very complex iconography. It shows a seated mendicant with elongated ears and wearing a large crown over his head. The long crown suggests the divinity status however the hand-mudra is that of a yogi.

In absence of a foundation inscription, the dating of the temple is attempted on the basis of its architectural style and sculpture. Cunningham2, the first modern archaeologist to visit the site, dates the temple between the fifth and third century CE stating it cannot be later than the fifth century CE and as old as the third century CE. Vincent Smith dates the temple to the reign of the Gupta king Samudragupta (350-375 CE) which is also the opinion of S K Saraswati.3 Percy Brown4 puts the temple in the first half of the fifth century CE. Joanna Williams5 assigns the temple to 445-470 CE stating she prefers to ascribe the temple to some unidentified small potentate, still under the waning suzerainty of the Guptas and deriving his taste from the network of imperial centers of the north and central India. She does not agree with Mirashi where the latter has taken the temple as a Vakataka monument on the basis of the Nachna inscription of the Uchchhakalpa king Vyaghra.

Inscriptions –  There is a pilgrim’s record on one face of the pillar.