Sirpur – An Icon of Dakshina Kosala

Traditions, as told by Xuanzang1, associate Buddha with Sirpur mentioning that he visited here, called an assembly, and exhibited his supernatural powers to subdue unbelievers. He further mentions an old monastery, situated nearby the stupa constructed by Ashoka, lying not very far from the capital city. In the same monastery, at some later point in time, Nagarjuna Bodhisattva took his residence.

Buddhist antiquities were noticed by Beglar and Cunningham during their visits in 1873 and 1881 respectively. A large image of Buddha was placed inside the Gandheshvara Temple, which evidently was found at some other site. A broken head of Buddha was also found to be Beglar. Two prominent Buddhist sites were unearthed during the excavations carried out by M G Dikshit between 1953-1956. These sites were Ananda Prabha Vihara and Svastik Vihara. Due to its Buddhist association and the value of its antiquities, Bodhisattva Nagarjuna Smarak Sanstha va Anushandhan Kendra, Nagpur financially supported excavations in Sirpur for five consecutive years, 2000-2005. During these excavations, more than 10 Buddhist monuments were unearthed, including the most majestic among all, Teevaradeva Vihara. This excavation also unearthed around 85 bronze statues from a single site, suggesting that Sirpur was having its own bronze manufacturing unit producing bronzes to be traded elsewhere.

Anand Prabha Vihara – It was excavated by MG Dikshit in 1954-55 under the auspices of the University of Sagar. The site has two large Buddhist monasteries adjacent to each other, Dikshit refers to it as the Main temple and Lower Monastery. The main temple is rectangular in the plan attached with a porch and a sabha-mandapa, the latter is supported on sixteen pillars. A row of cells is provided around the courtyard. A massive entrance was provided in the north, this elaborately carved doorway has dvarpalas on either side. A large image of Buddha in bhumisparsha-mudra adorns the garbha-grha. He is accompanied by another large life-size image of Padmapani. The doorway to garbha-grha has a large figure of Ganga. As per an inscription, it was built by one bhikshu, Ananda Prabha, thus the monastery is named such.

The lower monastery has a central stone-paved courtyard, with a row of cells around it. Various antiquities were recovered from the site. It appears that the residents were involved in various crafts as tools belonging to agriculture, smithy, pottery-making, and gold-work were recovered from cells. One cell has obtained a full set of goldsmith’s tools including a touchstone with a mark of gold-testing. Many bronze images were also made locally, a fine bronze image of Buddha with gold plating and eyes set in silver is also recovered from the site.

The construction of this monastery appears to coeval with the Lakshmana Temple, during the early reigns of king Mahasivagupta Balarjuna (595-650 CE). Around the end of the 11th century CE, when the monastery was abandoned, it was occupied by people of the Shaiva faith. They did some modifications to suit their practices. Finding damaged statues of various Hindu gods corroborate this.

Inscriptions – The foundation inscription of the monastery was found during its excavation, details as below.

Stone inscription of Ananda Prabha Vihara2 – The inscriptions starts with the praise of Sugata (Buddha). The object is to record the founding of a village and establish a feeding house for the followers of the Buddha, during the reign of Mahasivagupta by one Anandaprabha. The poet who composed the inscription is Sumangala, son of Taradatta. The inscription was engraved by Prabhakara.

Second Buddhist site – It was the second Buddhist site that was excavated by MG Dikshit along with Ananda Prabha Vihara. The site has three Buddhist monasteries. All monasteries follow the same plan, a stone-paved central courtyard surrounded by cells all around, one cell in the back wall used as a shrine. Based upon the findings of glass and shell bangles remains in one monastery, Dikshit suggests that it was used as a nunnery. Peter Skilling3 differs and argues that identification of a monastery as a nunnery because bangles were found in some of the cells is not only fanciful but illogical since nuns did not wear bangles any more than did monks. In the basement of one of the cells are found a miniature stupa in crystal and a gilt vajra. Findings of damaged images of Ganesha, Mahishasuramardini, and Shiva-Parvati suggest that these were used by followers of the Shaivite faith at some later period.

Svastika Vihara – This monastery is built in form of a svastika, an open courtyard at the center flanked on sides by four wings, each wing containing three rooms and a veranda facing the courtyard. The central room of the wing facing the entrance has an image of Buddha in bhumi-sparsha-mudra. He is accompanied by an image of Padmapani. The southwest corner of the courtyard has an image of Hariti. A Chinese copper coin with a square hole in the center, attributed to Kai Yuan (713-741 CE), was found in the monastery area suggesting Chinese pilgrims visiting the viharas. Stadtner4 dates this vihara slightly earlier than the Anandaprabha vihara, around 585-595 CE.

Teevaradeva and Harshagupta Vihara (SRP-5) – It is the largest and probably the earliest Buddhist vihara at Sirpur. It was built in two phases. The first phase consists of a sixteen pillared mandapa, ardha-mandapa, antarala, and a projected garbha-grha, all facing west. Ten cells for monks were provided around the mandapa. It was highly embellished with images of Buddha and his life, mithuna figures, and animals. The platform and entrance doorway are in stone, rest is made of brick. Four fragments of inscriptions were found, one reads Teevaradeva and another reads Harshagupta. This suggests that the vihara was built during the reign of Mahasivagupta Teevaradeva (520-540 CE) and continued during the reign of his brother’s son Harshagupta. Apart from these inscriptions, clay seals in Brahmi characters are also found. On the seal is labeled the chief architect Taradatta and his emblem. Another seal is a regular Buddhist beej-mantra seal. 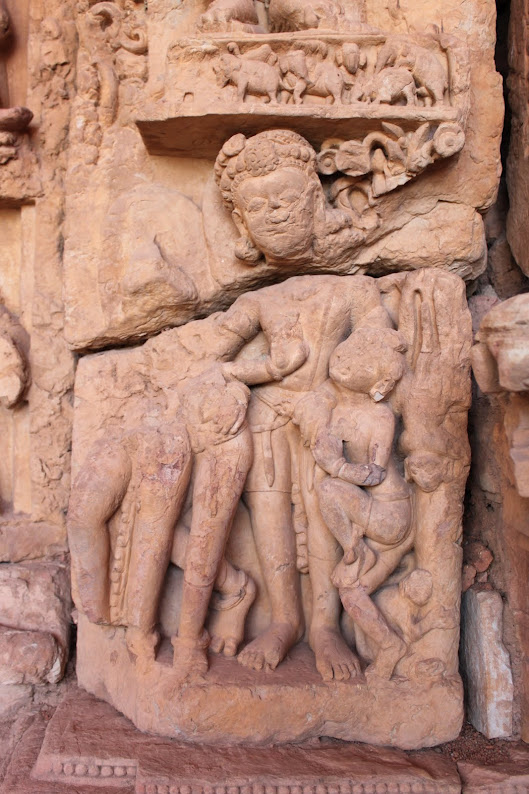 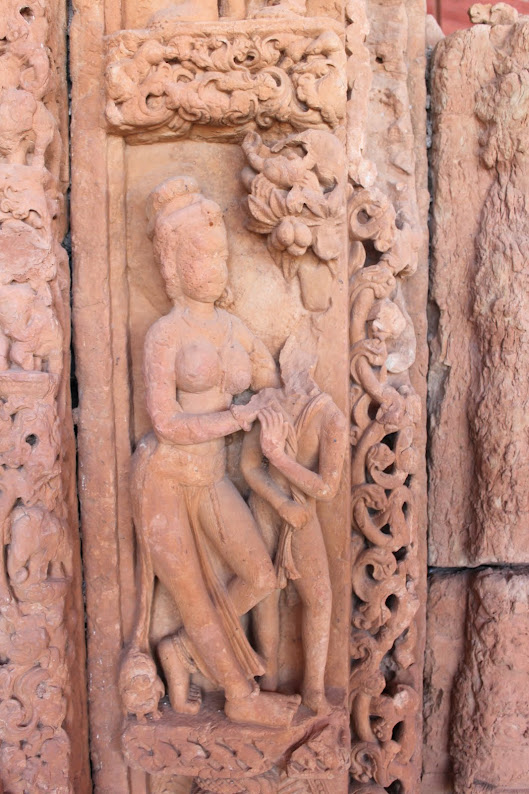 The sculptures over the doorway depict various zoological aspects, and many animals are carved in accompanying human images. Among these are visible copulation scenes in an elephant herd, monkeys over a tree, sheep fighting, birds over mango trees, a dog accompanying a couple, squirrels, and mice. The sculptors carved out the natural scenes they witnessed around them. The amalgamation of animals in close coordination with humans depicts the social and cultural conditions of that period.

Excavated Buddhist Viharas (monasteries)6 – Various Buddhist monuments have come to light during the excavations in 2000-2011 carried out by A K Sharma and his team. Brief on these sites is provided below.

Jain Vihara – This vihara, situated 300 m east of Gandheshvara temple was excavated in 2007. It consisted of a central pillar courtyard with cells and room all around. The entrance was provided in the north. Some fragments of broken images, appearing to be of Jain Tirthankaras, have been found from here.