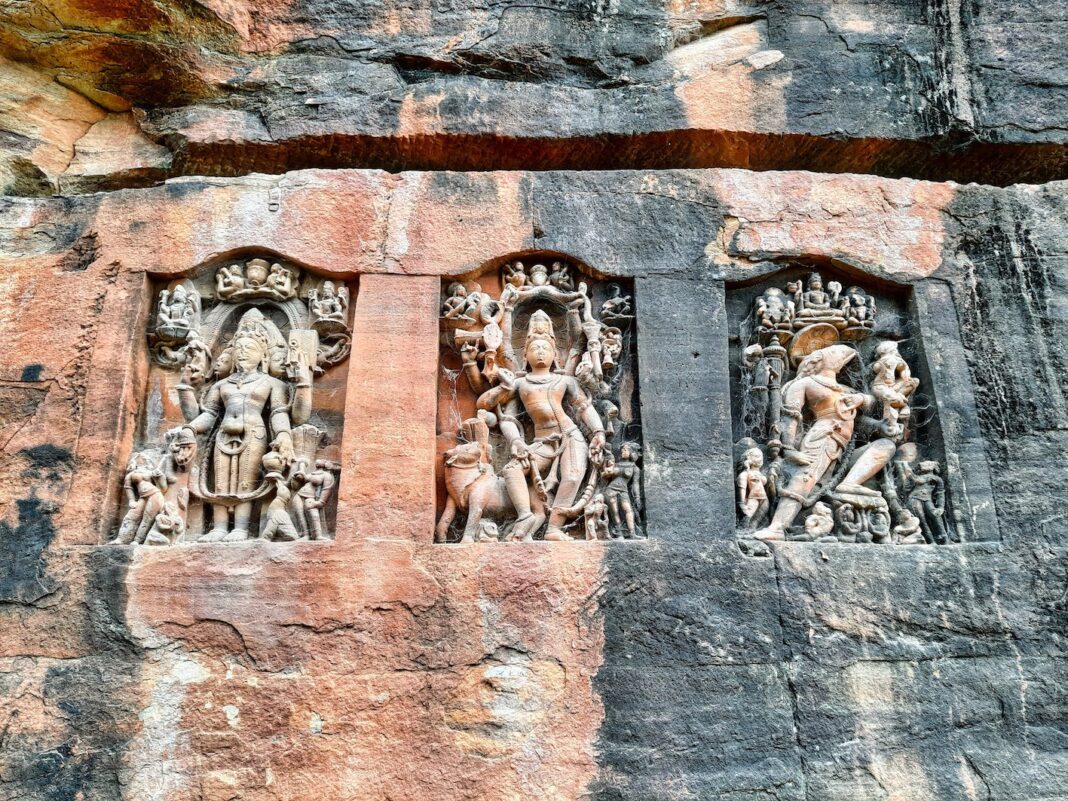 Rakhatera (रखतेरा) is a small village in the Chanderi tehsil of the Ashoknagar district of Madhya Pradesh. The village is situated on the eastern bank of the Aur River, a tributary of the Betwa river. It is a small settlement and as per the 2011 census, the village had 110 families with a total population of 498 persons. The first modern reference to the village and its sculptures appeared in 1925 when it was explored by M B Garde, the Superintendent of the Gwalior Archaeological Department.1 The site did not get the attention of modern scholars, except for its inscriptions which were printed in different epigraphic compendiums from time to time, till 2019 when a monograph on the site was published by Peter Flügel2. The Brahmanical images on the rock face were carved during the Pratihara period of the mid-10th century CE, however, the site was later sanctified by Jain monks through the performance of the sallekhana ceremonies during the 15th century CE.

Overlooking the river Aur, on the western face of a hill are carved a series of rock-cut sculptures. The sculpture of Adinatha, the biggest among the group, is 10.5 feet high and 7.5 feet broad. It is popularly known as Bhaiyadant or Bhimasena. The Tirthankara is shown seated, flanked by two elephants on either side, carved on the top side of the panel. On his right side is goddess Ambika standing below a mango tree and holding a child. On his left side is goddess Chakreshvari, standing holding a chakra, a gada, and a shankha. A bull, the cognizance of Adinatha, is on the seat on which the Tirthankara is seated. Over the pedestal of the seat is carved a dharma chakra flanked by gaja-shardula (elephant-lion) motif on either side. The pedestal also carries a dated inscription. The inscription is a pilgrim’s record suggesting that the image would have been carved much earlier than the date of the inscription. On the lateral side of the above sculpture, a small niche is carved. Inside the niche are carved a pair of footprints. The niche is decorated with lotus on its back wall as well as on either side. The symbol of the swastika is carved on either side of the footprints. Interestingly, the swastika symbol on the left is carved in the reverse direction, like a mirror image of the symbol on the right side. As per the inscription, dated Vikram Samvat 1555, engraved above the niche, these footprints are of Sri Visalaraja. A natural cave on this face is provided with an entrance doorway, the latter is left plain. No imagery is present inside this cave. Flügel5 opines that the Jain monk Sri Visalaraja might have performed sallekhana at the site and this his footprints were carved. Moving further south from this natural cave is a rock-cur relief image of Ganesha. Next to Ganesha is a figure of Parvati. She is four-armed and carries a sword, a trishula (trident), and a shield. She is sitting over her lion mount and behind her head is a halo made of a lotus flower.

Further to the south, about 10 feet away from the Parvati image, are the three niches, containing the masterpieces sculptures of the group. Each niche measures around 2.2 feet high and 1.6 feet wide. The leftmost niche contains a three-headed image of Brahma who stands wearing a large garland reaching slightly below his knees. He is four-armed and carries a lotus, a sruk (oblation spoon), a kamandalu (water vessel), and aksamala (rosary). On the top corners of the panel are shown Shiva and Vishnu. Near the feet of Brahma, to his left, is his swan mount. A lotus halo is behind the heads of Brahma. The figure of Shiva is given prominence as he is shown with twelve arms and dancing with his two arms raised holding a serpent. In the rest of his arms, he carries a trishula, damaru, khatvanga, and a bell. The lower two arms have fingers held in dance karanas. He also wears a long garland and has a lotus halo behind his head. His mount, Nandi bull, is standing right side behind Shiva. Near his feet, to his left, are Bhringi and Parvati. Unlike the Brahma panel, on the top corners are placed two musicians. A figure of Varaha replaces the usual depiction of Vishnu, generally seen in the Hindu Trinity sculptures. He is four-armed and carries a gada and a chakra. In one arm he holds Bhudevi and the other arm is placed over his thighs. He is standing in alidha-mudra, with one foot raised high and placed over a lotus held by nagas below, representing the netherworld. His lotus halo is turned outward making a canopy over Varaha’s head. Above this canopy are placed three figures, Brahma, Vishnu, and Shiva. This ends the sculptures in the south, and now we move to the north of the Adinatha sculpture.

To the immediate north of the Adinatha figure are two small niches carrying unfinished images. Both the niches carry images of Uma-Maheshvara shown seated. The mounts of Shiva and Parvati, Nandi and lion respectively, are shown beneath the seat. In the left sculpture, Ganesha and Kartikeya are shown beneath the seat at the terminals, while in the right sculpture they are placed over the seat on either side of Shiva and Parvati. The posture of Parvati is different in both sculptures, in the left sculpture, she has both her legs placed away from Shiva while in the right sculpture she is maharajalilasana-mudra. Further to the north are four niches, one niche is unfinished. The two niches, at the terminals, carry images of Uma-Maheshvara. The leftmost Uma-Maheshvara image shows Shiva and Parvati seated over a throne and their mounts, Nandi and lion, seated below the throne. Ganesha and Kartikeya are also below the throne at the terminal positions. Shiva is four-armed and Parvati is two-armed. At the top corners are shown Brahma and what appears to be Indra or Kartikeya though that position is usually taken by Vishnu. The Uma-Maheshvara sculpture in the rightmost niche is similar in depiction to that of the leftmost, with slight variations. Unlike the previous image, here Ganesha and Kartikeya are not below the seat but next to the seat at the terminals. While in the previous image, two Gandharvas are shown carrying a crown above Shiva’s head, in this sculpture we find Shiva doing tandava with his retinue. The niche left to the previous carries a figure of standing Vishnu. To the northmost facade of the hill are two more niches, both carrying sculptures of Uma-Maheshvara. Both the sculpture are very similar in their style and depiction to sculptures discussed before thus we may omit their description. Further north, over the facade, is engraved an inscription dated Vikram Samvat 999 and 1000. Garde tells the Hindu sculptures may be contemporary to the date of this inscription while the Adinatha image might be carved five centuries later.