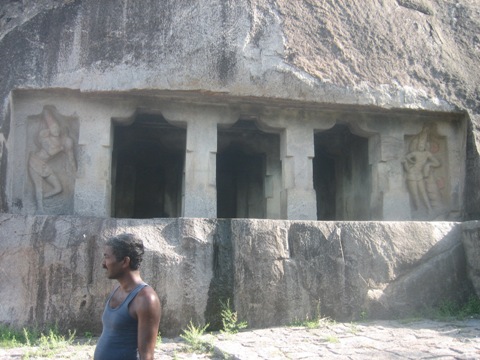 Mandagapattu village is situated in the Viluppuram district of Tamilnadu. This otherwise insignificant village holds very important position in the Indian temple architecture, especially of the Pallavas.  The village boasts of a rock-cut shrine, the earliest one of the Pallavas and of the northern Tamilnadu if not in the whole state.  The Pallavas ruled from their capital town of Kanchipuram which is around 100 km from this village. It is very interesting to note that they decided to construct the first specimen of their art far from their capital town. The only explanation may lie that the hill in the village, attached to a tank, provided the right and appropriate spot for carving out a rock-cut shrine.

The first modern reference of the monument is found in 1882, in the list of antiquarian remains of the Madras Presidency1, Viluppuram was a taluk during that period. In 1918, this cave temple was featured among the Pallava antiquities by Dubreuil2 however it was not discussed in detail. The inscription of this cave-temple was copied in 1905 and edited by T A Gopinatha Rao3 in 1923-24. He was the first scholar to propose that it was Mahendravarman I who introduced the rock-cut shrines in southern India. First detailed description of the cave-temple appeared when A H Longhurst4 took up the Pallava architecture in detail. Though he was aware of the inscription and its details however, he did not explicitly take the cave-temple as the first such creation of the Pallava king. A better description and interpretation was made available by K R Srinivasan5 in 1958. He was successfully able to differentiate the Mahendra style with the rest of the Pallava creations by utilizing the form and shape of the pillars. His landmark study, which is in use till date, paved the path for all the future scholars.

Rock-cut Cave Temple (Lakshitayana) – This rock-cut temple is hewn out of the northern face of a small hill, overlooking a water tank, situated in the west of the village. It consists of a ardha-mandapa and a mukha-mandapa. The shrine is cut at the height of 4 feet above the ground, however no rock-cut steps were provided. The front facade of the mukha-mandapa has two pillars and two pilasters with niches at the terminals. The pillars and pilasters are of simple design, a cubical base and top (saduram) with intervening octagonal section (kattu). This design is broken at the extreme pilasters of the niches and the pilasters of the ardha-mandapa, where these are tetragonal throughout. Corbels above these pillars and pilasters are heavy and with circular profile. The overhanging cornice is left plain. Later Pallava cave-temples usually have kudu decoration over this cornice. An another row of pillars and pilasters separates the mukha-mandapa to the ardha-mandapa. The rear wall has four pilasters forming three niches, each 3 feet deep. These three cells were dedicated to Brahma, Vishnu and Shiva. Faint traces of painting in one of the cell suggests that these were painted with images of their respective deities. Sockets in the floor inside the cells, which suggests that the statutes of the deities would have been fitted into these.

Two bulky dvarpalas are carved in the niches at the terminals of the mukha-mandapa. Both are shown with two hands standing by the side of the their huge club. The space within the niches did not permit the sculptors to carve all the parts of the sculptures as club of one dvarpala is totally missing while that of other is cut at the bottom. This suggests that either the carving was an afterthought or the execution did not follow the design. Dvarpalas in the later Pallava cave-temples started displaying attributes of Shiva behind their headdress, one having curved horns for Nandi or trishula while the other having a protrusion over forehead like an axe-blade. One dvarpala, the western side, at Mandagapattu has an axe-blade protrusion however the other dvarpala does not have horn-like decoration. It should be mentioned that this shrine was dedicated to Brahma, Vishnu and Shiva therefore putting up Shaiva dvarpalas would not be appropriate. As the three cells at real walls are all alike, therefore all the three deities were given same importance.

It is also interesting to note that Mahendravarman I, who proclaimed himself as a staunch follower of Shiva in his Trichy inscription, dedicated his first rock-cut shrine not to Shiva but to the Hindu Trinity of Brahma, Shiva and Vishnu. Though the shrine was dedicated to the three gods, mention of Shiva in between Brahma and Vishnu suggests that the central shrine was dedicated to Shiva. As all the three shrines showcase no dissimilarity, it suggests that no prominence was given to the central shrine even if it was dedicated to Shiva. If we accept the tradition that Mahendravarman I was initially a Jain follower and later converted by Appar, being converted by an Alvar saint suggests that the king was a Shaiva devotee. The reason that Mahendravarman I dedicated his first shrine to the Hindu Trinity suggests his liberal religious outlook. However, with the contemporary Alvars and Nayanars popularizing Vaishnava and Shaiva faiths respectively, and Mahendravarman I being converted by Appar, how successful the king was in maintaining his liberal outlook is evident from the dedication of this shrine.

Inscriptions – A foundation inscription is found on a front pillar of this cave. The details are as below:

On the front pillar of the cave6 – Language is Sanskrit, script is Grantha – not dated, however belongs to the reign of the Pallava king Mahendravarman I (600-630 CE) – “This brickless, timberless, metalless and mortarless mansion of Lakshita was caused to be made by king Vichitrachitta for Brahma, Isvara and Vishnu.”

K R Srinivasan7 takes this inscription as a definite evidence of the authorship and date of the first rock-cut Pallava cave temple. He further suggests that this should be taken as the first cave-temple in the south. R Nagaswamy8 interprets this inscription suggesting that the earlier temples of Tamilnadu were built of all the materials; brick, timber, metal, mortal and stone. Mahendravarman I claims that he used only stone in building this shrine dispensing the other four. Nagaswamy’s interpretation is due to the consideration of the Pillaiyarpatti cave-temple (Sivaganga district), which he assigns to fifth century CE based upon the paleographic study of its inscription.

It is generally accepted that the claim of Mahendravarman I, as innovator of the rock-cut architecture, is taken for the Pallava territory. Probably, this claim does not apply to other territories, i.e. that of the Pandyas. There are few rock-cut shrines in the Pandya territory which are either antecedent or contemporary to the Mandagapattu shrine. We have already discussed the case of the Pillaiyarpatti rock-cut shrine above. Another rock-cut shrine is of Malayadikurichi (Tirunelveli district) which G Subbiah9 suggests was almost contemporary as he dates it in the fourth decade of the seventh century CE.

It is very clear that the king Mahendravarman I was very proud and pleased to accomplish his objective of constructing a temple without use of brick, timber, mortal and metal. This suggests that it was his first attempt, probably not tried before his time within the Pallava territory. It is well known that such rock-cut shrines have been attempted prior to Mahendravarman I time. The very first known attempt is the caves of Lomas Rishi cave at Barabar hills in Bihar, excavated during the Mauryan period. It is very much possible that Mahendravarman I had seen similar shrines during his early years, if we agree that he spent his early years in Andhra country, as a co-regent during his father’s reign, witnessing the Undavalli Caves. And, also very probable that he was not aware of any such attempt by others, and therefore was very pleased at his accomplishment. Whatever be the case, he should be credited for starting a tradition, which was followed and extended by his successors, giving us some of the best and magnificent pieces of Indian art.

When compared in the size and magnitude with those of the Chalukyas and of the western India, Mandagapattu rock-cut shrine is small and compact. The simple reason for the same would be the material the sculptors had to work upon. In case of the Chalukyas and the Buddhist and Hindu shrines of western India, the sculptors utilized the soft material such as sandstone, trap or similar. However the Pallava sculptors had to work on hard stone of granite and gneiss due to unavailability of softer rocks. Working on the harder stone requires more labor and efforts and therefore the Pallava rock-cut shrines are smaller and compact in comparison to the ones worked out on softer stone.10