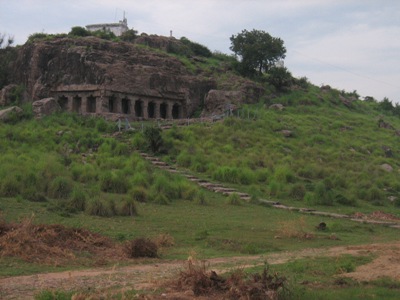 Mamandur is situated in Tiruvanamalai district of Tamilnadu. The village is famous for its set of cave temples excavated on the eastern face of a hill running north-south in the west of the village. Mamandur is situated not very far from Kanchi, the capital of the Pallavas. When Mahendravarman I  (600-630 CE) started his quest of constructing a temple without using materials other than stone, Mamandur would have been a natural choice being in vicinity of his capital. However, the king did not go with the obvious choice and instead selected Mandagapattu for his feat. Was it a simple overlook on his part or an informed decision?

A Tamil Brahmi inscription found in a natural cavern in the village mentions a chieftain who captured Torur and gifted the cavern. Not sure if this cavern was used by Jains as usually such caverns were meant for Jain monks and recluses. This inscription is dated in the 2nd-3rd century CE. During the early seventh century CE, few cave temples were constructed here by the Pallava king Mahendravarman I (600-630 CE). The nearby tank, referred as Chitramegha-tataka or Chittiramegha-tataka, in the Chola inscriptions suggests that the tank was also excavated by Mahendravarman I, who also bore the title Chitramegha. The Chola inscriptions of the tenth-eleventh century CE refer the village as Mavandur situated in Narasigamangalam or Narasimhamangalam. It is very probable that the name of the village, Narasimhamangalam, might be taken after the Pallava king Narasimhavarman I (630-668 CE). Beck1 mentions that the earlier name of Mamandur was Mahendramangalam however she does not quote any reference for this claim. Another Chola inscription mentions the village was under the division of Madurantaka-chaturvedi-mangalam suggesting the latter was named after the Chola king Uttama Chola (970-985 CE) who is also known as Madurantaka. As the first Chola inscription found in the village may be dated to the reign of Uttama Chola, therefore it is very probable that the village got its due attention during his reign. However, this attention was short lived as the last Chola inscription found here belongs to the reign of Rajaraja I (985-1014 CE).

General Epigraphs: Below two inscriptions are not found in the cave temples described below therefore these are published here.

Monuments – There are total of four rock-cut shrines, numbered 1 to 4 by ASI (Archaeological Survey of India). I will follow the same numbering while describing these cave temples.

Cave Temple No 1 (Northern Cave Temple) – It is the northernmost shrine in the series. It faces east and has a mukha-mandapa followed by a shrine in the rear. Like Mandagapattu, excavation here also is 4 feet above the ground.  The facade has two pillars and two pilasters. Pillars have cubic top and base (saduram) and middle octagonal section (kattu). On the square face of the saduram are carved lotus medallions. Pilasters are tetragonal throughout. Curved profile corbel is supported over these pillars. The kapota (cornice) is left undecorated however traces of painiting suggests that it was painted with circular lotus medallions against a red background2.

The southern wall inside the verandah has an inscription occupying most of the space. On the rear wall is a shrine projecting outwards. Its adhisthana (base) has regular five mouldings, jagati, tripatta-kumuda, kantha with kampa above and below, and a pattika. Front side of the shrine has four pilasters, forming two niches on sides and an entrance in the middle. In the side niches, dvarpalas could have been attempted however no such attempt was made. The rear wall of the cell has a platform, probably to keep a movable image. Faint traces of painting are also found on the rear wall suggesting that the images were painted and worshiped. With no traces of images inside the shrine, absence of an inscription and no dvarpalas make it is very challenging to assess the dedication of the shrine. Drawing similarities with the rock-cut shrine at Mahendravadi and references of Vishnu epithets in inscription, Srinivasan3 suggests that this shrine might be dedicated to Vishnu. However, this is supported on very flimsy grounds.

Inscription: The northern wall of the mukha-mandapa has an inscription occupying all the space. Though much of the inscription is damaged, however what is left is very important information as it presents the resume of the Pallava king Mahendravarman I. It is written in Sanskrit language using Pallava Grantha characters.

Abstract4: The record mentions the titles Satrumalla, Nityavinita and Satyasandha and the expressions such as Panchalanirmita, Valmikivanita, Vatsapahara, Vyasapahara, Vyasakalpa, Kavinamprakasha, Vrittidakshinachitra and Varnachaturttha which seem to be attributes of the king. There are also references to Gandharvashashtra, Mattavilasaprahasana and Bhagvadajjukam. K R Srinivasan notices a small inscription in one line in late Grantha characters at the base of the rock-cutting, just immediately in front of the southern pilaster. It contains musical notes indicating the arohana and avarohana svaras of a raga. Line 12 and 13 seem to suggest that (the king) ‘wanted to achieve  what was not achieved before in the realm of music’.

A different interpretation is suggested by A Vishnu Bhat5. As per his analysis, line 6 mentions titles of two plays of Mahendravarman I, Mattavilasa-prahasana and Bhagavadajjukam. Line 7 has a word Pragrt (for Prakrt) suggesting that Tamil was the mother tongue of Mahendravarman’s scribe. Line 7 also has word catustaya, which sums up four of something. Bhat says that as the previous line is about plays therefore catustaya refers to four plays composed by Mahendravarman I, two of which have come down to us and other two are lost. After the gap, in line 7, reference is made of the senior queen of the king. The inscription gives priority to the queen till line 10. Bhat takes Chandralekha as the name for the queen. She was inspired by her husband’ singing. Line 8 tells that Chandralekha developed a voice which had the quality of the sound of honey-bees. It is also told that her intellectual grasp of the arts was equal to her husband’s. Line 9 mentions that her voice was excellent in high registers, and was very expressive of poetic meaning (in the lyrics). The last portion of the line mentions that she had become a sisya of the king, well educated in sacred sastras. Line 10 indicates that she was like the goddess of music and art (Sarasvati) in the company of her creator-husband (Brahma). Towards the end of the line 10, the inscription shifts towards the king as a primary subject. Line 11 mentions that the king, together with her, studied the musical traditions of the past and distinguished what are called vrtti, dakshina and citra (the three ways in which the instrument may relate itself to the voice, as described in Natya-sastra). Line 11 tells that they created an ordered system of rules by arranging musical syllables in group of four, he established instrumental music (for the vina) at a level which had not been attained before. And the king did this by being able to follow (on the instrument) the music she was so expertly singing.

Cave Temple No 2 (Rudravalisvaram Cave Temple) – This cave temple is located south of the previous cave, and faces east. It has a mukha-mandapa, followed by an ardha-mandapa and three shrines at the rear wall. The front façade is supported on two pillars and two pilasters. Pillars have top and bottom cubic base (saduram) and middle octagonal section (kattu). The pilasters are tetragonal from top to bottom. The corbels above the pillars are in curved profile, however the curve is so acute that it looks like angular profile. Above the corbels, on the beam, of the front row, traces of paint is seen which suggests that in those times this cave was painted exquisitely6. Contrary to Mandagapattu, though there is enough space left beyond the pilasters, however no attempt was made to carve dvarpalas. Dvarpalas might be avoided in the front as all the inside shrines have their own set of dvarpalas.

Three shrines are provided on the back wall of the cave. All these shrines share the same platform, adhisthana (base) of which has five regular mouldings, jagati, kumuda, kantha with kampa above and below and pattika. All the three has a staircase of two steps in front, the parapet of which is in form of an elephant’s proboscis. Two dvarpalas are attached to each shrine. The central shrine is dedicated to Shiva, as attested by the Chola inscription and by the characteristics of its dvarpalas. Both the dvarpalas are shown standing by side of their huge club. The present lingam inside the shrine is planted at a later period. The southern shrine is perhaps dedicated to Brahma as supported by the appearance of its dvarpalas. Both the dvarpalas are similar in appearance and display sage like character holding lotus in their hands and a bun above their head. Northern shrine was dedicated to Vishnu as the dvarpalas are shown wearing long kirita-makuta. The cells of the corners two shrines are empty, but traces of paintings can be seen inside, which suggests that the deities were carved in paint.

Inscriptions: There are two inscriptions in the cave, both belonging to the Chola period.

Cave Temple No 3 – This rock-cut shrine is the largest among the group and is located south of the previous cave. The temple is open on two sides, east and south. The eastern facade is supported on five pillars and two pilasters while the southern facade has two pillars and two pilasters. The plan consists of a mukha-mandapa and an ardha-mandapa and circumambulatory path around. However, the construction was left incomplete due to instability of the rock. The pillars have cubical base and top (saduram) and middle octagonal section (kattu). The corbel above the pillars is with a curved profile.

There are five shrines on the rear wall of the cave-temple. All of these share the same platform (adhisthana) composed of regular five mouldings, jagati, kumuda, kantha sandwiched between two kampa and pattika. Below the adhisthana is an upana moulding. Staircases, consisting of three steps, are provided in front of all the five shrines. Cells of all the five shrines are empty and devoid of dvarpalas. Due to missing dvarpalas, it is tough to find the dedication of these cells. There are two additional cells on the lateral walls of ardha-mandapa. Similar cells are also attempted on the lateral walls of the mukha-mandapa due to an alternate design taken by the architects to overcome the disruptions faced on the southern facade due to the instability of the parent rock.

Cave Temple No 4 – This simple and small rock-cut shrine is the southernmost in the series and faces east. The shrine is consisted of a mukha-mandapa followed by cells or niches for deities. Its facade is supported on two pillars and two pilasters. The pillars have top and base cubical portion (saudram) with middle octagonal section (kattu). Pilasters are tetragonal throughout. These support a curved profile corbel above. As the construction was left unfinished, from what remains it appears that there was a plan to provide three cells at the rear wall. K R Srinivasan9 mentions that the cave was left unfinished due to a natural fault striking from the top of the southern side downward towards the north passing through the line of the front pillars. Though on the plan, this shrine appears to the simplest even when compared to the Mandagapattu cave temple, as it has only a mukha-mandapa while the latter has a mukha-mandapa and an ardha-mandapa. However, Srinivasan is of opinion that this was an attempt during the reign of Narasimhavarman I (630-668 CE), the successor of Mahendravarman I. His suggestion may be due to the fact that the village was known as Narasingamangalam in its Chola period inscriptions suggesting that this name was taken after the Pallava king Narasimhavarman I and therefore it is very probably that he completed the works left incomplete during the reign of his father, Mahendravarman I10.