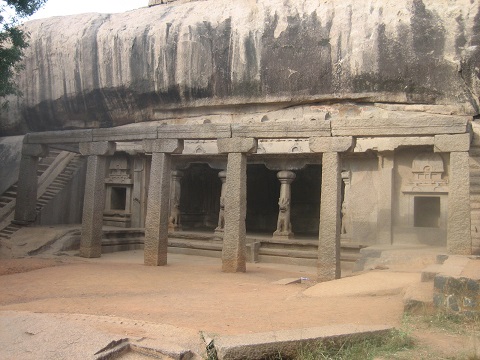 This east facing cave-temple is 24 feet long and 8 feet deep. It appears that this would have been a most complete edifice in its time, till it was taken over by the Vaishnava occupants during the Vijayanagara period and modified to a large extent. During this Vaishnava resurgence, figures adoring the walls of this temples were chiseled off, the arrangement of cells at the back wall was altered and a mandapa was added in front of the cave.

The façade of the cave-temple is supported on two pillars and two pilasters. The pillars have seated-vyala base supporting an octagonal shaft. Above the shaft, we find a bulbous capital as seen in few other caves however the square abacus above the capital is absent. The cornice on the façade has dormer-window (kudu-arches) decoration. Instead of regular human heads inside these arches, here we find lotus medallions inside. Above these arches, five interconnected oblong shrines are hewn out.

A frieze of ganas, under the cornice, is the first such specimen found in Mamallapuram. This motif was adopted as an essential part in the later edifices. There are total of twenty-seven ganas, the central one is shown with pot-belly, while those on the terminals are shown supporting the roof. Two interesting gana figures are found, one with the head of an elephant and one with that of a bull. The one with the elephant head is identified with Ganesha by Srinivasan1, and its presence suggests that he was the leader of the ganas. Another gana is shown with the head of a bull and it may be identified with Nandi.

At the extreme ends of the façade, on either side, a dvarapala figure was carved out. These figures have been totally chiseled out during the Vaishnava resurgence in the 14th-15th century CE2. From whatever is left of these figures, it may be surmised that they were having Shaiva character. On either sides of this facade, an ekatala (single storey) shrine has been carved out. Its shikhara is square, which according to later period agamas, falls under the Nagara style.

In the back wall of the cave, three cells were excavated originally. The central cell is projecting forward into the hall. The side cells have been removed during the Vaishnava insurgence and leaving only the central cell intact. The cell is provided with dvarapalas at its entrance, however these dvarapala figures have been chiseled out. Inside the cell, on its back wall, is a niche where a Somaskanda panel was originally carved out however this panel is also chiseled off leaving its traces over the wall. Dehejia3 tells that this Somaskanda is in the same style as that of the Dharmaraja Ratha and predates the Somaskanda panels of the Rajasimha period.

As the two subsidiary cells do not have niche on their back walls, Srinivasan suggests that this cave temple was originally dedicated either to Hindu Trinity with Shiva in central cell or to the three different forms of Shiva. Relief panels were carved out on the lateral walls of the mandapa however these were also chiseled off. From the etchings left, it appears that the southern panel had Durga with attendants4 while the northern panel had seated Sadashiva with three faces accompanied with sage Vyaghrapada5.

Inscriptions – An inscription found at this cave is of much interest. This inscription is left intact and it is surprising that no damage was done to it during the Vaishnana resurgence. One theory may be that the script of the inscription was already obliterated by that time. As its meaning was not understood therefore the resurgent did not waste their time in etching it off. The text of the inscription is provided below.

No 50 of the Inscriptions of the Pallavas6 – language Sanskrit, script Pallava-grantha – “Six times cursed be those, in whose, heart does not dwell Rudra, the deliverer from the walking on the evil path“