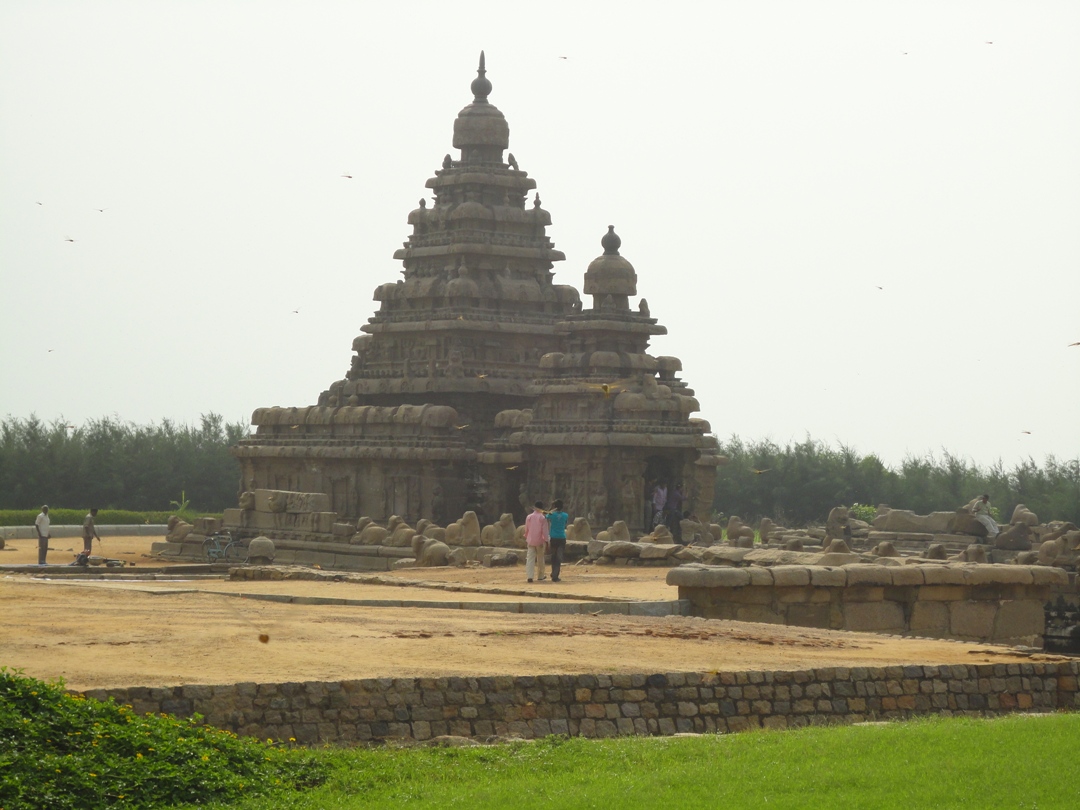 Located very close to the Mamallapuram beach, and aptly named, the Shore Temple has been the emblem of the town since ages. In the backdrop of this temple was developed the legend of the Seven Pagodas, the name given to the town by the early mariners. It is believed that once there stood seven temple with rising glittering towers, reaching far into the ocean. However, at present, we only see two temples, intact with their rising towers. Whether there were five/six more temples is still an unsettled issue which has been discussed in detail in another chapter of this article.

The present Shore Temple is in fact a temple complex comprising of multiple temples. The complex is dominated by two rising towers, corresponding to two different temples, dedicated to Shiva. These two temples are set up back to back, one facing east and the other facing west, however both are not in the same axial alignment. Sandwiched between these two temples is a temple dedicated to the anantsayana, sleeping form of Vishnu. Though these two Shiva temples are connected with the Vishnu temple, however all the three are not in a straight line. The Vishnu temple appears to be the earliest among all the three. Both the Shiva temples were constructed during the reign of the Pallava king Narasimhavarman II Rajasimha (700-728 CE) as attested by inscriptions. When the Shiva temple on the east was constructed, the Vishnu temple became a part of its prakara (boundary) wall. The eastern temple is saved from the dashing ocean water by construction of a groyne-wall in about 1944-451.

The temple with the taller tower, facing east, is entered through a small gopuram. It is referred as Kshatriyasimha-Pallava-Ishvara-griham in inscriptions. This temple is inside an enclosure (prakara) wall which surrounds it through north, east and south, leaving it open on the west. The open west side allows entrance to the Vishnu shrine. The temple is built on a square plan and has a four-story tower. The tower of the temple is lean and elongated, achieved by avoiding the regular row of mini shrines on few stories. This mini shrine arrangement is missing on the first and the fourth story. Instead of it, the first story has sejant lions at the corners while the fourth story has dwarf human (bhuta) figures at the corners. Though the row of shrines is missing on few stories, the kudu (dormer window) ornamentation over cornice is present on each story. The shikhara is octagonal rising above octagonal griva. The nasikas over the shikhara display Ganesha figures inside. The stupi above the shikhara is intact and gives it appropriate elevation.

The garbhagrha (sanctum) is guarded by dvarapalas. A Somaskanda panel is carved in its back wall. A tall, sixteen-faceted linga, broken at the top, is installed in front of this panel. This linga was displaced and later installed at this place, Nagaswamy2 suggests that this reinstallation was done in a wrong orientation. The ardha-mandapa, preceding the sanctum, has sculptures on its north and south walls,  Brahma in the south and Vishnu in the north. The outer-walls of the mandapa also has sculptures, northern side is better preserved. On the north wall, there is an image of Shiva as Tripurantaka and Durga as Mahishasuramardini.

The temple facing the west has smaller tower, consisting of three stories. It is referred as Rajasimha-Pallava-Ishvara-griham in inscriptions. However, it also follows the pattern of the taller tower, thus achieves similar slenderness and elevation. Mini-shrine arrangement is missing on the first and third stories, thus only provided on the second story. Both, first and the third stories have dwarf human (bhuta) figures at the corners. The tall octagonal griva supports an octagonal shikhara. The stupi is present above the shikhara however it is broken in its upper part.

The garbhagrha (sanctum), like the other temple in the complex, also has a Somaskanda panel in its back wall. There is a socket for linga in front of the panel, however linga is missing at present. There are two mandapas in front, one small and other large, superstructure of both have not survived. The temple is enclosed in two circular enclosures, the small enclosure has a gopuram on the west side. There are two sculptures at this entrances, one depicting Shiva as Ekapadamurti and another of a naga with five hoods. The inner walls of this enclosure has panels depicting history of the Pallava clan. However these all panels are very much weathered leaving except very few still surviving with faint traces. Beyond this smaller enclosure are three large bali-pithas. The enclosure wall of the outer circle is topped with multitude of Nandi images which were put on the top of the wall during the restoration activities.

As per an early eleventh century CE inscription of the period of the Chola king Rajaraja I, the temple complex was under worship and known as Jalasayana. The three temples within the complex were referred as, Pallikondaruliya-devar for the Vishnu temple and the two Shiva temples as Kshatriyasimha-Pallava-Ishvara-griham and Rajasimha-Pallava-Ishvara-griham. The inscription also tells that there were flower gardens on both side of the complex. On the evidence of its inscription, it is confirmed that it was the Pallava king Narasimhavarman II Rajasimha (700-728 CE) who constructed the Shiva temples of this complex. While there is a consensus among scholars that the two Shiva temples were the construction of Rajasimha, however on the authorship of the Vishnu temple, there are diverse views. Scholars who support Nagaswamy are of opinion that all the three temples were the creations of Rajasimha. The scholars on the other side are of opinion that the rock-cut image of Vishnu preexisted before the Rajasimha period. Most of them are of opinion that this image was the work of Narasimhavarman I Mamalla (630-668 CE), and few even suggesting that it was Simhavishnu (560-580 CE) who might have created this image.