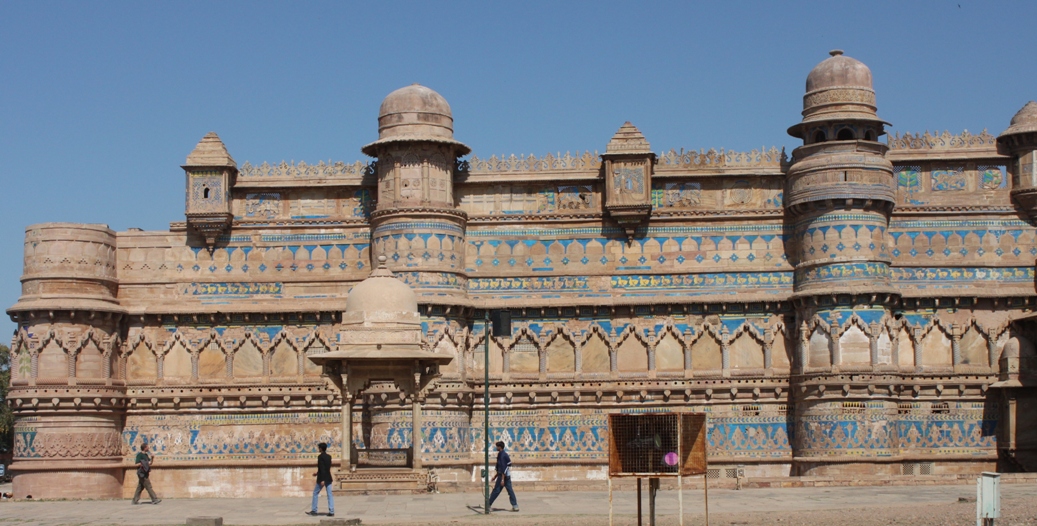 (This article is written in multiple pages, links are provided at the start and the end)

Introduction – Gwalior is a major and an important city of Madhya Pradesh state. Gwalior was the largest princely state among the twenty-two such states which formed a union after the independent of India. This union was formed in April 22, 1948 under the name of United State of Gwalior, Indore and Malwa. It was later taken inside the constitution of India under the name of Madhya Bharat. Gwalior used to be the capital of this state from September to April while Indore for the remaining period, till Bhopal replaced both as the new capital of Madhya Pradesh. The present Gwalior is an amalgamation of old and new town, keeping the feel of their respective eras intact within their folds.

Alexander Cunningham quotes three historic annals written on the early history of Gwalior. The first work is of Kharg Rai, who wrote in the beginning of Shah Jahan’s reign. Badili Das copied his accounts and extended till the reign of Daulat Rao Scindia in 1796. Fazl Ali also wrote in the reign of Shah Jahan and he copied the contents of an early work of a brahmana named Ghan Shyam. Hiraman, the son of Kardhar Das and munshi of Motamin Khan wrote the events of early and his present time during the reign of Aurangzeb.

All these three authorities differ on the foundation date of Gwalior. As per Kharg Rai, it was founded at the beginning of Kali Yuga, that is 3101 BCE. According to Fazl Ali, it took place in year 339 of the Vikrama Era, that is 275 CE. The same is probably also the opinion of Hiraman who assigns the foundation to Vikrama year 332. Cunningham accepts the opinion of Fazl Ali and Hiraman and explains this by taking the one of the oldest inscription found at Gwalior.

This inscription talks about erection of a Sun temple by a minister of Mihirkula, the son of Toramana. Cunningham takes the date of Toramana from an inscription at Eran where year 165 is mentioned in a record of Budha Gupta’s reign. Cunningham took this year as Saka Era however he is wrong in his assumption. The year mentioned in Budha Gupta’s record must be of the Gupta Era in which all other Gupta inscriptions are dated. The Saka Era starts from 78 CE while the Gupta Era from 320 CE. Using the reference of 78 CE (Saka Era) Cunningham arrives at year 275 matching with the accounts of Fazl Ali.

Ferishta mentions that Gwalior was founded by Malchand of Malwa, however he does not specify any authority on this statement hence this cannot be validated. All the three annals taken by Cunningham unanimously states that Gwalior was founded by a Kacchwaha chief, Suraj Sen, the petty king of Kutwar or Kuntalpuri. As per a legend, Suraj Sen was a leper and once he arrives at Gopagiri hill, feeling thirsty after his hunting expedition. At this hill he met a hermit, Gwalipa, who gave him water from a vessel. Surprisingly, Suraj Sen was immediately cured of his leprosy after drinking that water.

The grateful king asked the hermit what can he do for him. The hermit asked him to built a fort on the hill and also extend the tank from which water has been drawn. Suraj Sen built a fort and named after the hermit, Gwali-dwar or present Gwalior. He also enlarged the tank which is called Suraj Kund after his name. The hermit gave him a new name, Suraj Pal, and promised that 84 of his descendants should rule after him, or so long, says Fazl Ali, as they should retain the name Pal. Accordingly, 83 of his descendants ruled over Gwalior with the name of Pal. The 84th, Tej Karn, lost his kingdom because he did not bear the name Pal.

The bardic accounts for the foundation of Gwalior do not carry any historical account as such. Gwalior had commanded its strategic importance because of its location on Dakshinapatha. This strategic location puts it under contention among rulers would like to acquire this place for various commercial and political advantages. Nagas were ruling this region during the second and third century CE from Kantipuri (modern Kotwal), Padmavati (modern Pawaya) and Vidisha. The Guptas exterminated the Nagas and the region came under their kingdom from the time of Samudragupta.

The earliest available inscription which mentions Gwalior, is of the reign of the Huna king Mihirakula datable to 517 CE. Hence it may be said that the fort is also probably founded in the 5th century CE. It can be said that Gwalior passed to the Huna from the hands of the Guptas during the reign of Budhagupta. However the Hunas were not able to retain the control of this fort for long as it passed to the Partiharas of Kanauj.

The Kachchhapaghatas or Kacchawahas took control from the Pratiharas in the latter half of the tenth century CE and they ruled for good two centuries. The Kachcchapaghata dynasty was started by Lakshmana who was succeeded by his son Vajradaman who for the first time bore the royal insignia suggesting that he captured Gwalior and became a king. Vajradaman was followed by Mangalaraja, the latter by Kirtiraja. Mahipala, a later Kachchhapaghata ruler, built Saas-Bahu temple in Gwalior fort.

An another line of the Pratiharas took back Gwalior from the Kachchhapaghatas in the last quarter of the twelfth century CE. Iltutmish captured Gwalior from this line of Pratihara rulers in 1232 CE. Gwalior was retained with the Muslim rulers till 1398 CE until the invasion of Timur resulted in confusion at the Delhi court which provided opportunities to the petty chiefs to assert their independence.

A Tomar Rajput, Vir Singh Deva, took advantage of this confusion and made himself the ruler of Gwalior starting the Tomar dynasty. Dungar Singh and Maan Singh were the two famous king of this dynasty which ruled over Gwalior till the first quarter of the sixteenth century CE. Soon after the death of Maan Singh, the fort fell to Ibrahim Lodhi and later to Babur. During the exile of Humayun, Sher Shah ruled for a short period over Gwalior till it was taken back from his successors by Akbar in 1559 CE.

The Mughals enjoyed a good period of rule for about two centuries over Gwalior. Their rule was broken by a Jat chief of Gohad, Bhim Singh Rana. Bhim Singh was on his expedition to conquer Malwa but instead he captured Gwalior in 1736 CE. The Marathas waged a war against Bhim Singh in which the latter wounded and died in 1756 CE. The Peshwa granted this fort to Mahadji Scindia, an able commander of his and this started the rule of the Scindia dynasty over Gwalior.

The Scindia dynasty, which ruled over Gwalior in 18th & 19th century CE, was founded by Ranoji Rao Scindia (Shinde), a distinguished commander under the Peshwa Baji Rao. Scindia claims Rajput descent however Garde mentions that a study suggests their descent from Sinds, a kshatriya clan of Naga race. After the conquest of Malwa by the Marathas in 1726 CE, Ranoji was entrusted with northern portion of the province. He established his capital at Ujjain in 1731 CE.

Ranoji died in 1745 CE and was followed by Jayappa (Jayaji Rao), Dattaji Rao and Janakoji Rao who were all brave soldiers and laid their lives in the field of battle. The zenith of Scindia’s reached during the reign of Mahadji Rao who broke his relations with the Marathas and started ruling independently. He got back Gwalior in 1784CE  from the hands of the Jat rulers who were ruling with the help of British when the British captured Gwalior from the Marathas in 1779 CE.

Mahadji’s successor, Daulat Rao Scindia, shifted the capital from Ujjain to Gwalior. However during his reign, the fortune of the Scindia family crippled. After the loss of the Marathas in the hands of British in 1818 CE, Daulat Rao was forced to accept local autonomy as a princely state under the British rule. Janakoji II, the adopted son of Daulat Rao, had a very short reign. Until he achieved adulthood, Maharani Baiza Bai, the widow queen of Daulat Rao, ruled the empire on his behalf.

Janakoji II died in 1843 CE and was succeeded by Jayaji Rao who was again an adopted child. Tarabai Raje, the widow queen of Janakoji II, ruled the empire till Jayaji acquired adulthood. Jayaji rendered valuable help to the British during the uprising of 1857. (to all my fellow Indians, I am still doubtful whether I should say the uprising of 1857 as first freedom struggle or not as in my view it was not a struggle but the uprising as it was caused because of hurting few individual sentiments)

In 1858, the fort was surrendered to Sir Huge Rose and it was with the British till 1866 when it was handed over to Scinidas in exchange of Jhansi. Madav Rao, who followed Jayaji, was a ruler of exceptional abilities and incredible energy in the words of M B Garde. He started many reforms in administration which resulted in remarkable progress in all directions. During the First World War, Madhav Rao provided liberal help to the British. He died at Paris in 1925, succeeded by Jivaji Rao.

Though the Scindia’s might be good rulers, taking care of their subjects, and they did fought with the British during the Anglo-Maratha wars however they did not participate in India’s freedom struggle and instead provided support to the British government. This would always be a dark spot on the otherwise sparkling history of the Scindias. After India’s independence, Jivaji rao was acceded to the Government of India and Gwalior was merged to a part of new Madhya Bharat state. His son, Madhav Rao Scindia, got involved into Indian politics. Their family since then has been an integrai part of Indian politics.