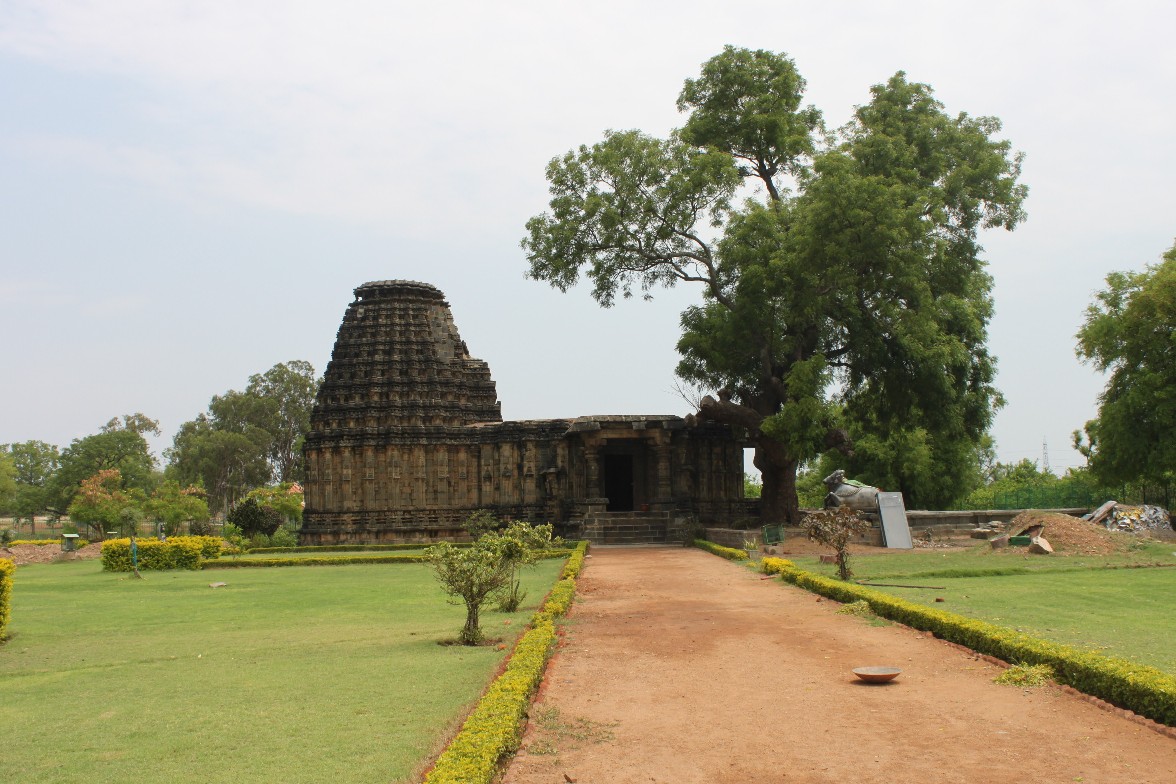 Introduction – Dambal is located in Gadag district. The village would have acquired quite a respectable reputation as evident from the inscriptions found in its vicinity. It is one among very few places where we find a society patronizing all three major faiths, Hindu, Buddhists and Jaina, prevalent during the early and medieval period. The village has been referred as Dharmavolal and Dharmapura in inscriptions.

The earliest inscription found, dated 1059 CE, was from the reign of the Western Chalukya king Someshvara I and mentions a grant to a Jaina shrine. Someshvara I patronized Shridharacharya who wrote a Jaina purana, Chandraprabhacharite.

Few Buddhist inscriptions are also found here. As per an inscription, during the reign of the Western Chalukya king Vikramaditya VI two Buddhist monasteries were constructed by the merchant communities of Lakkundi and Dambal at Dambal.

From inscriptions, it can be said that these were in operation till thirteenth century CE. From above statements, it is evident that Dharmapura lived to its name during those bygone eras, patronizing and providing space for all major religions to co-exist and grow simultaneously. However, with the down fall of Buddhism in India and contraction of Jainas to few regions, Dambal also became predominantly Hindu. After the end of thirteenth century, we do not find any reference to its Buddhist monasteries and Jaina temples. The Buddhist monasteries are not traceable, and the Jaina temple is almost lost except few ruins.

Monuments – There are few tourist attractions in Dambal. The two temples, of Dodda-Basappa and Someshvara, are located opposite to each other. There is a ruined fort where ruins of old Jaina temple can be seen. There are no ruins of the Buddhist monasteries mentioned in the inscriptions.

Dodda-Basappa Temple – This famous and celebrated temple is a very singular Chalukya creation, mostly attributed to its shape and style. The temple faces east and consists of a garbha-grha (sanctum), sukanasi (vestibule) and a mandapa (hall). The hall is provided with two entrances, one on the east and another on the south. Both the entrances are provided with porches where the eastern porch has been converted into a hall to house a Nandi.

The main reason which made this temple famous and singular is its complex outer plan. The vimana is modeled as a star with 24 points while the hall is modeled as 32-point star. What makes this temple stand out among other stellar temples is its 24-pointed star plan as a regular start plan comprises of 8-point, 16-point or 32-point. As there are re-entrant points/corners in between each star point of the vimana, and these corners being large in size, the overall composition appears to be 48-pointed star.1

Cousens2 explains the stellar plan of this temple as, “This is obtained by revolving a square about its center, its angles stopping at points equidistant from one another, the angles and re-entrants angles thus formed, being the perimeter of the plan. The shrine is planned on twenty-four salient angles, and the hall on thirty-two, but the continuity of these is broken where the shrine joins the hall and where the porches come.” Foekema explains that to produce a 24-pointed star, a rectangular corner must be divided into six equal parts. And this makes this vimana singular, as in Indian architecture, a stellar design is nearly always based on dividing a rectangular corner two or more times, thus providing 8-point, 16-point or 32-point stars.

The stellar plan is continued with the shikhara which is comprises of seven stories. The first story is complete and follows the base pattern of the vimana however the above stories fail to follow the full pattern. It would be fair to say that it was the Hoysalas who made stellar plans famous however it was not there invention as we have many older temples depicting the stellar plans.

The mandapa doorway on the east is elaborately carved. It has seven shakhas, running from the base to lintel and back to the base on the other side, thus covering three sides of the doorway. Gajalakshmi is present on the lalatabimba of the lintel. She is accompanied with four elephants, instead of the usual two.

There is a torana (architrave) before the garbha-griha entrance. Few Chalukyan temples depict this feature of placing a torana in front of the sanctum/antarala. Images inside the torana are missing however looking at the festoons and loops, it would be proper to state that it was meant to place the Hindu Trinity.

There is no foundation inscription, the earliest inscription found is dated in 1148 CE and referred the lord as Malabeshvara. This inscriptions is from the reign of the Western Chalukya king Someshvara IV. It might be said that the temple would have been constructed during the 1100-1150 CE.

Someshvara or Dabgadi Temple – Referred as Someshvara Temple by Cousens and Dharmeshvara Temple by Foekema. the latter claims to derive this name from the AIIS photo-archives. This temple lies very close to the Dodda-Basappa Temple. It is a Hindu temple and faces east. The temple consists of a garbha-grha (sanctum), sukanasi (vestibule) and a gudha-mandapa (open hall). The hall here is rectangular instead of a square found very common. The hall can divided as five bays wide and four bays deep. The external bays on three sides are covered with a sloping roof, the rest of the nine bays have a flat roof above.

The vimana is very simple, devoid of any decoration on external walls. No traces of shikhara are found thus suggesting it was flat roofed temple. The hall is provided with three entrances, on each on the east, north and south. Inside the hall, the central roof is supported on four pillars. There are additional 24 pillars, 12 full length and 12 half-length. The half-length pillars are supported on the parapet wall. Antarala doorway has pierced stone jail at the doorjambs, the feature mostly seen in the Chalukyan temples. An inscription found in the temple refers the god here as Madhavesvara.

Fort and Temples – Dharwad district gazetteer talks about a stone rubble fort and a Jaina temple inside that fort. However at the time of that gazetteer, both these structures were in almost complete ruins. The gazetteer mentions that these were existing in 1842 however at present these are completely destroyed.

How to Reach – Dambal is located in Gadag district of Karnataka and situated about 23 km from Gadag town. It is located on SH 45, Gadag-Mundargi road. Gadag is the nearest town, railway station.