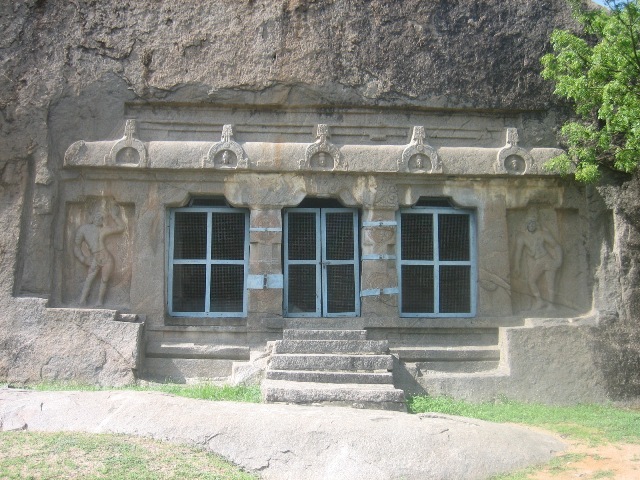 Dalavanur is small village in Viluppuram district of Tamilnadu. This otherwise insignificant settlement is known for its magnificent cave-temple of the Pallava period. The first modern reference of this monument was found in the Annual Report of Epigraphy for 1904-05 where V Venkayya provided a notice of its inscription. First detailed description of this shrine as well as its environs was provided in the South Arcot district gazetteer of 19061. It tells that the rock was locally known as Pancha Pandava Malai as it was believed that the Pandavas visited the place during their wanderings. From the reports of V Venkayya, the inscription was deciphered and assigned to the Pallava king Mahendravarman I. Behind the temple, a set of narrow steps leads to a little natural terrace where are cut some geometrical figures usually used in the game of “the fifteenth tiger”. A little further north, about half way up, is a cleft in the rock, filled with water, supposedly the source of supply after the rains.

The inscription was first edited in 1914 by E Hultzsch2 in Epigraphia Indica vol XII. In 1918, the shrine featured amongst the list of the Pallava antiquities by Dubreuil3. He did not focus much on its architectural details, but rather on the comparison of the script of its inscription with other contemporary Pallava inscriptions. As the inscription does not have any reference to the Pallava king Mahendravarman I (600-630 CE) therefore Dubreuil attributes this shrine to Simhavishnu (575-600 CE), father of Mahendravarman I. A better and much detailed architectural description of the cave-temple appeared in the Pallava Architecture by A H Longhurst4. A comprehensive study of this shrine and other Pallava rock-cut shrines was made available by K R Srinivasan5 in 1958. He was successful in differentiating the Mahendra style with the rest of the Pallava creations by utilizing the form and shape of the pillars. His landmark study, which is in use till date, paved the path for all the future scholars.

Satrumalla Cave Temple – This shrine is carved on the southern face of a small hill lying north of the village.  The cutting from the front is deep enough to allow for staircase, two flights of four steps, cut from the same rock. The base of the shrine has regular adhisthana mouldings; upana, jagati, tripatta-kukuda, kantha sandwiched between two kampas and pattika. The front façade is supported in two pillars and two pilasters. Beyond the pilasters are provided two niches housing dvarapalas. Pillars have cubical base and top (saduram) with intervening octagonal section (kattu) while pilasters are tetragonal throughout. Saduram sections of the pillars are decorated with lotus medallion. These pillars have a phalaka portion at the top supporting a curved-profile corbel above it. Above the corbel is placed a kapota (cornice) decorated with five kudu-arches. Inside these arches are shown a human head. There are further mouldings above the corbel.

Dvarapalas in the outer niches are similar in design and dress. Western dvarapala is not shown without any weapon and his one arm is raised in adoration. The easter dvarapala is shown standing near his club with his one hand resting over his waist. An exquisite makara-torana is carved over the central entrance. This makara-torana is built with a foliage arch emerging from the mouth of a makara at the terminals. Each makara is ridden by a gana. The arch take a dip in the middle allowing space to place a gana, and making a double arch. Dubreuil6 refers this design as double-arched tiruvatchi.

Inside the mandapa, an inner shrine fronted by a porch is provided in its western wall. Contract to the usual practice of providing the inner shrine in the rear wall, the architects at Dalavanur chose a lateral wall for this purpose ensuring that the inner shrine faces east. The Mandagapattu rock-cut shrine faces north and the shrines in the rear wall also face in the same direction. Though both the monuments, Dalavanur and Mandagapattu, belong to Mahendravarman I however it is only in the former where the architects chose an inner shrine to be in a lateral wall. Flanking the entrance of this inner shrine are dvarapala niches. Both the dvarapalas are shown in the same posture, standing in tribhanga pose with one hand on their waist and another raised in adoration. The temple is dedicated to Shiva and it is rather unusual that the dvarapalas do not show the usual Shavite characteristics like protruding trishula prongs and axe-blade.

There is an unsettled controversy with the Sanskrit and Tamil foundation inscriptions engraved over this rock-cut shrine. It is suggested that the Tamil inscription may be dated later, probably to ninth century CE, as it uses less archaic script. K R Srinivasan7 studies this in detail and suggests that due to paucity of known examples of Tamil script of that period, both the inscriptions should be treated coeval and complementary to each other. However, if we agree that the Tamil inscription is of later period, then all the possibilities indicate that this shrine probably took a longer time for its final completion and the Tamil inscription was added when it was all finished and the memory was afresh.

Inscriptions of Dalavanur – There are three inscriptions, details of all provided below.