Mahendravadi is a small village in Arakkonam taluk in Ranipet district of Tamilnadu. The old name of the village was Mahendrapura, probably derived from the Pallava king Mahendravarman I (600-630 CE). A large tank, referred as Mahendra-tataka in inscriptions, was also excavated by the same king in the village. Similar to the other early shrines of Mahendravarman as in Mandagapattu, Mamandur, here again we see that the shrine was excavated near to a water-body. The district gazetteer of 18811 tells that once this village was a large town but reduced to about 800 inhabitants by that time. It also describes the village  tank stating the date of this fine tank was unknown and it used to serve lands some seven or eight miles distant. The gazetteer mentons traces of fort wall were seen not far from the tank.  This suggests that the village was of considerable importance in the past, enough to provide for a fort.

The next modern reference of the monument is found in 1882, in the list of antiquarian remains of the Madras Presidency2, however it was very brief mention. In 1896 the inscription was copied and deciphered. In 1918, this cave temple was featured among the Pallava antiquities by Dubreuil3 however it was not discussed in every detail. First detailed description of the cave-temple appeared when A H Longhurst4 took up the Pallava architecture with all available and known temples attributed to the Pallavas. Am exhaustive and revised chronological study appeared in 1958 from K R Srinivasan5  and it is considered as a milestone work still referred by all modern scholars. 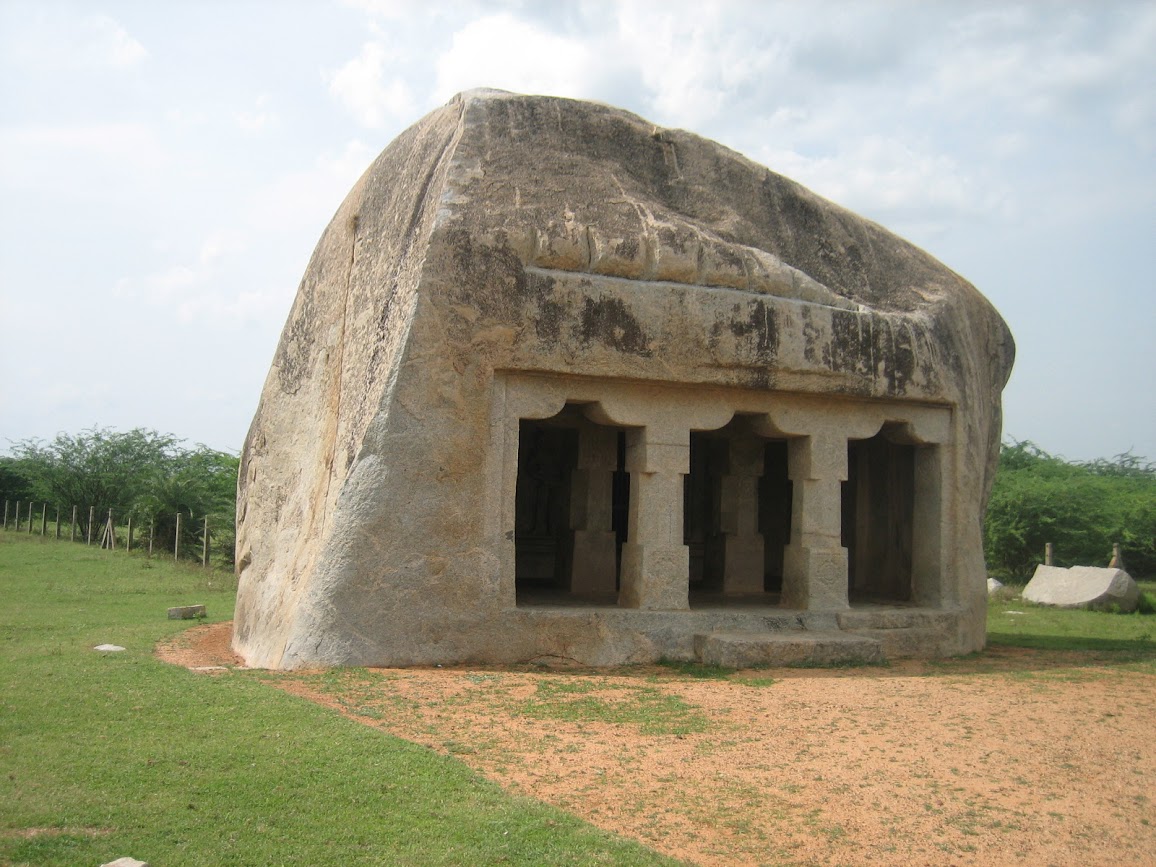 Mahendra-Vishnu-grham – A free boulder, standing amidst green paddy fields, was selected by the Pallava artisans to excavate a shrine enriching the beauty and sanctity of the spot. The eastern face of this boulder was even out and carved with a temple consisting of a mukha-mandapa, an ardha-mandapa and garbha-grha in the rear. The front façade of the cave is supported on two pillars and two pilasters. Pillars have base and top cubical sections (saduram) with intervening octagonal part (kattu). The cubical faces of the pillars are carved with lotus medallion on all four sides. The pilasters are left tetragonal throughout. The next row of pillars separates the mukha-mandapa from ardha-mandapa. These pillars are left plain, devoid of the lotus medallions on their cubical parts. The corbel placed above the pillars is with curved-profile. 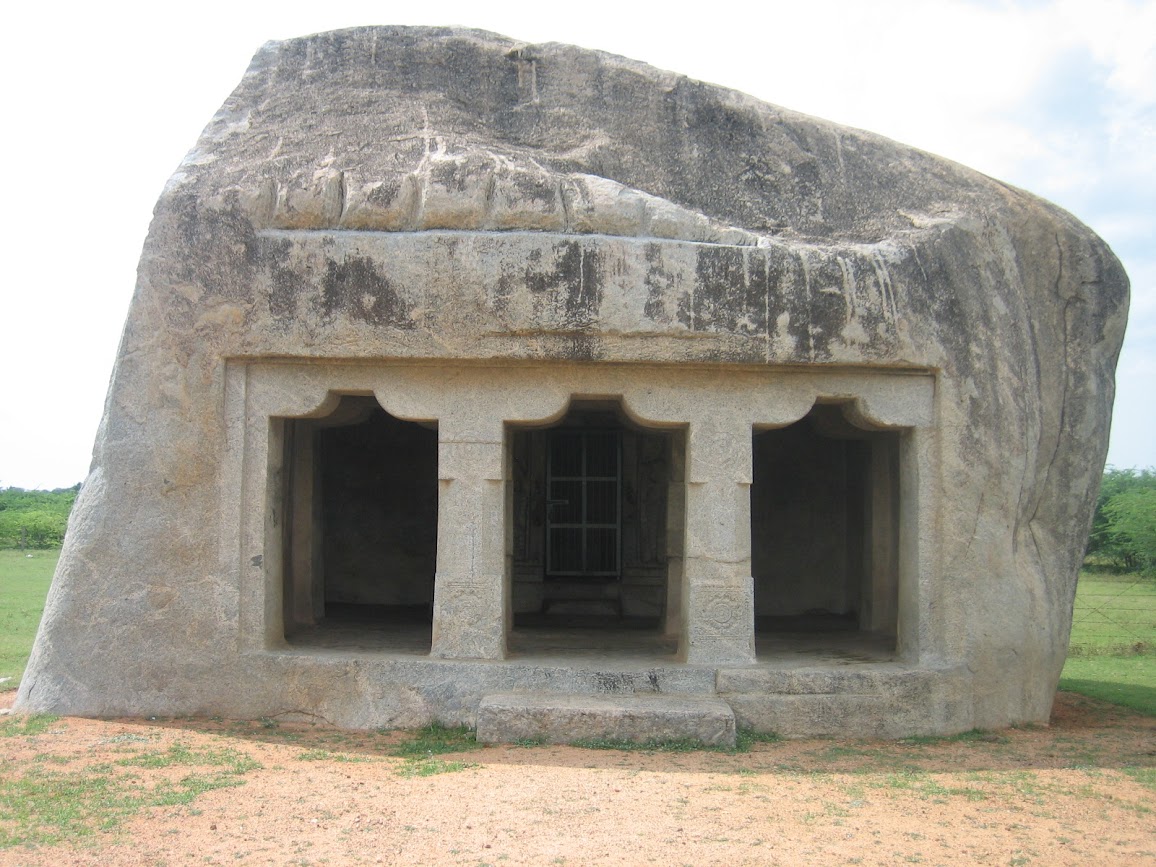 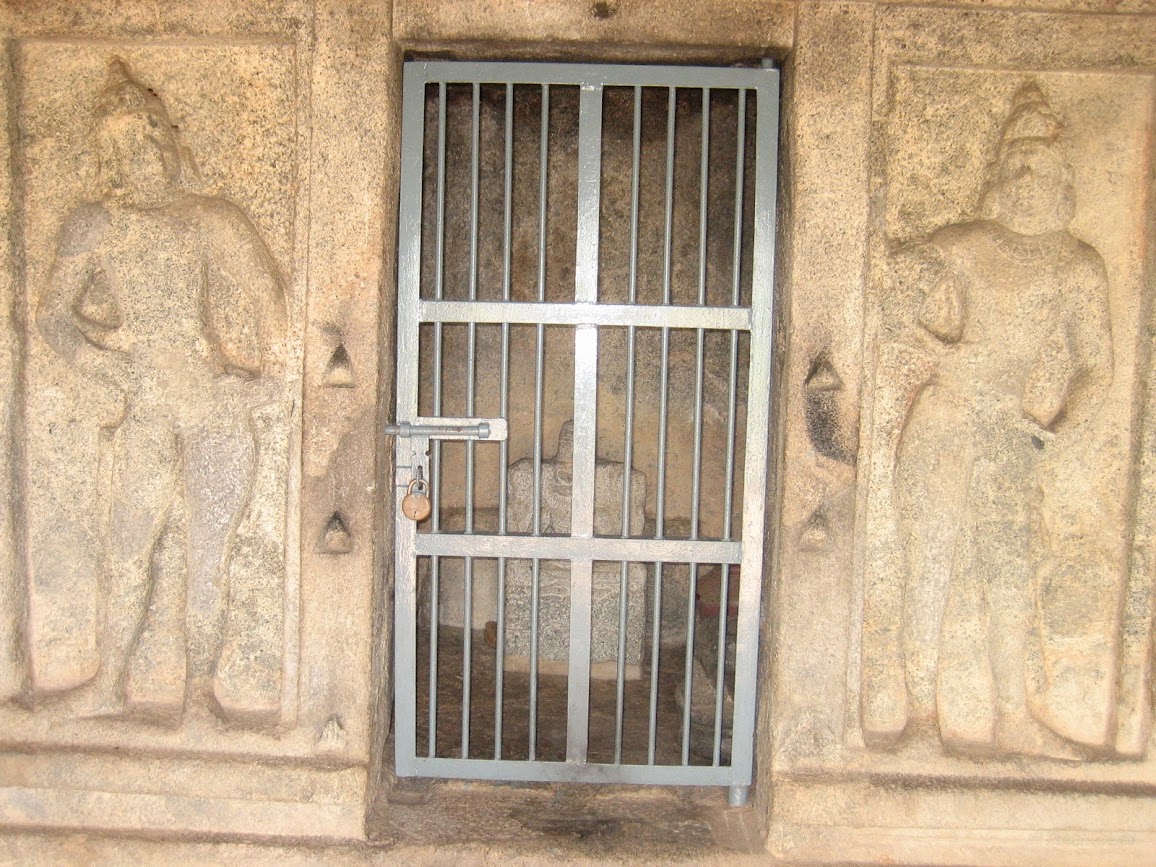 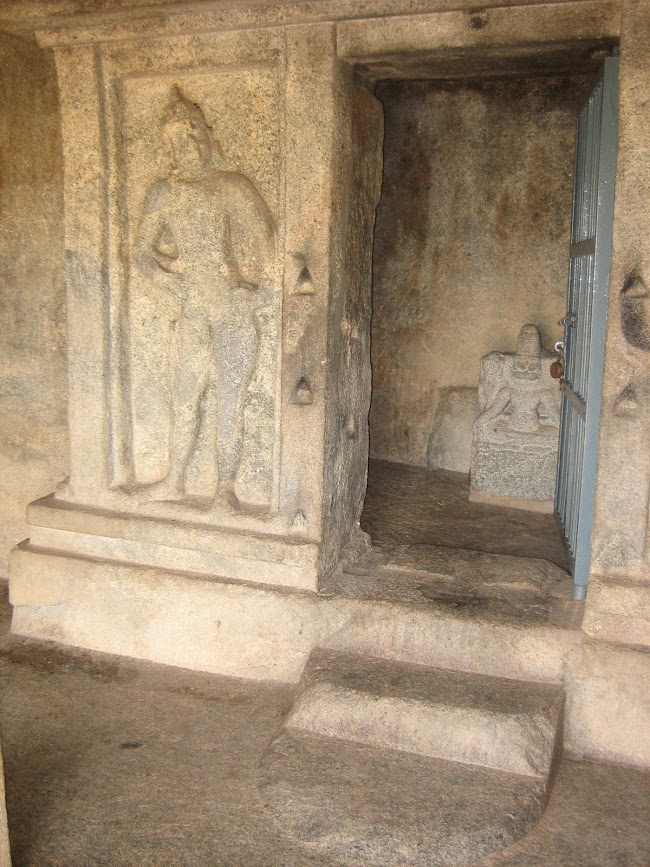 The shrine in the rear is flanked with two dvarapalas, both shown in the same posture, resting one hand on their waist and the other hand pointing towards the shrine. Both wear their yajnopavita in nivita style. The shrine is project outward with its adhisthana (base) composed of reduced number mouldings; jagati, kumuda, kantha and pattika. Rock-cut steps are provided for entry into the shrine. Inside the shrine is placed an image of Narasimha, which of course is a later installation. This shrine is of great importance as it is among very few temples, from Mahendravarman period, dedicated to Vishnu.

Inscription – There is a foundation inscription, details provided below.

On the southern pilaster6 – Pallava Grantha script, Sanskrit language – “Splitting the rock, Gunabhara caused to be made on (the bank of) the Mahendra-tataka (tank) in the great (city of) Mahendrapura this solid, spacious temple of Murari (Vishnu), named Mahendra-Vishnugriha, which is highly praised by good people, (and which is) an abode of beauty pleasing the eyes of men.”