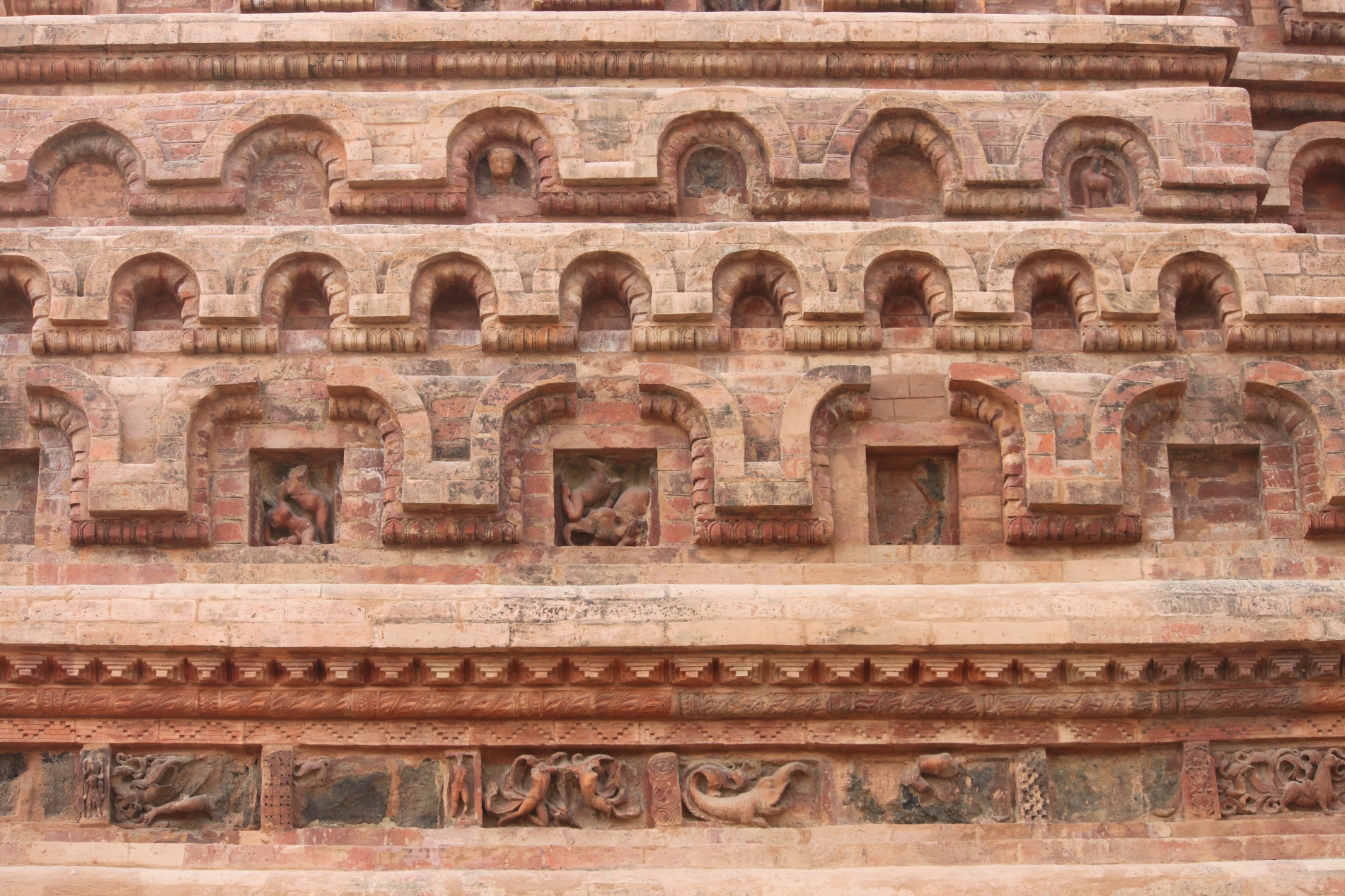 Bhitargaon (भीतरगांव ) is a village in the Kanpur district of Uttar Pradesh. Alexander Cunningham visited the village in 1877-78 and described the antiquities of the site and nearby villages. He mentions that the present village was situated in the heart of the ancient city of Phoolpur. The village of Barigaon, situated about 2 km to the east of Bhitargaon, was said to be the outer village of the same ancient city.1 Nothing much is known about the village and its environs as no significant inscriptions have been found here. Also, the old temple of the village was not in worship thus it failed to develop its sthalapurana and cultural history.

Brick Temple – Alexander Cunningham was the first modern scholar who took the notice of this temple in 1877. He mentions that his attention was drawn by his old friend, Raja Siva Prasad, who told him about the exquisite terracotta panels of the temple. For Cunningham, it was the first ancient brick temple he found standing in Northern India as at other places he had only found scattered molded bricks but no standing structure. Therefore, Cunningham suggested that most of the ancient temples and religious structures must have been built in brick and decorated with terracotta panels. On the dating of the temple, Cunningham tells that it cannot be placed later than the 7th or 8th century CE, and is probably even older.2 J Ph Vogel was the next scholar who did a short survey of the temple in 1907.3 He dates the temple at least three centuries earlier than that of Cunningham, to the 5th century CE, and states that it is undoubtedly the earliest brick temple in the then United Province. The temple suffered serious damages and loss in between the visits of Cunningham and Vogel. The front porch which was standing during Cunningham’s visit was already lost by the time of Vogel. There were some conservation assessments done in 1884-85 by the then PWD department however those were not executed due to paucity of funds.  A reduced assessment was also made by the PWD however that was also not executed. A. H. Longhurst4, then Superintendent of Archaeological Survey, Northern Circle, visited the site in 1909 and found the temple in a very dilapidated state.  He found that the temple platform was built on cell foundations as also seen in the brick temples of Sirpur. He also mentions stone beams and lintel were originally placed over the garbha-grha doorway and this suggests that the doorway was also probably built of stone. And if accepted, then this is a very similar approach also found in the brick temples of Sirpur. Longhurst was of opinion that the removal of the stone doorway would have caused the collapse of the porch as it was not able to bear the mass of brick above it anymore.

The temple faces east and its mukha-mandapa (porch) is approached through a flight of six steps. This mukha-mandapa leads into a square ardha-mandapa (inner hall). The ardha-mandapa is connected to the garbha-grha through an antarala (passage/vestibule). The foundations of the temple were built in a cell-like structure. Above it was raised the temple walls and shikhara built in bricks joined with mud-mortar. The temple is constructed over a square plan. As the temple has recesses introduced on its sides, it may be put under the tri-ratha pattern due to two levels of recesses dividing its sidewalls into bhadra, prati-ratha, and karna sections. There are a total of 28 pilasters distributed across all the sides and providing space for niches containing sculpture. During the visit of Cunningham in 1877-78, the mukha-mandapa was standing with its walls with an arched roof above however it fell shortly after his visit as no traces of it were found by Vogel in 1907. The restoration plans did not focus much on the mukha-mandapa and at present, it is standing without a roof.

The ardha-mandapa now stands without its roof, however, the roof was present during the visit of Cunningham in 1877-78. It is a square room of 8 feet, almost half the size of the garbha-grha. The antarala is 8 feet long and about 4.5 feet wide. The roof above it is now a restored version however originally it was an arched roof. There are various theories on how this arched roof was achieved. Cunningham tells that the arch was constructed by placing bricks side by side and not face to face. Longhurst tells there were stone beams and lintel supporting the roof above and the overall load was on the stone doorway. As there are two passages, mukha-mandapa and antarala, these would need three doorways but none was discovered from the temple. Zaheer5, after doing a details analysis, opines that there was no stone doorway as the kind of arch constructed by the original builders does not require a stone doorway to support the load.  He tells the basic principle of the stability of an arch is that blocks forming it uphold themselves by mutual pressure, and the entire arch is maintained in equilibrium by means of the resistance of the supports. The garbha-grha is a 15 feet square room. Above the garbha-grha, an additional chamber of half the size is raised. 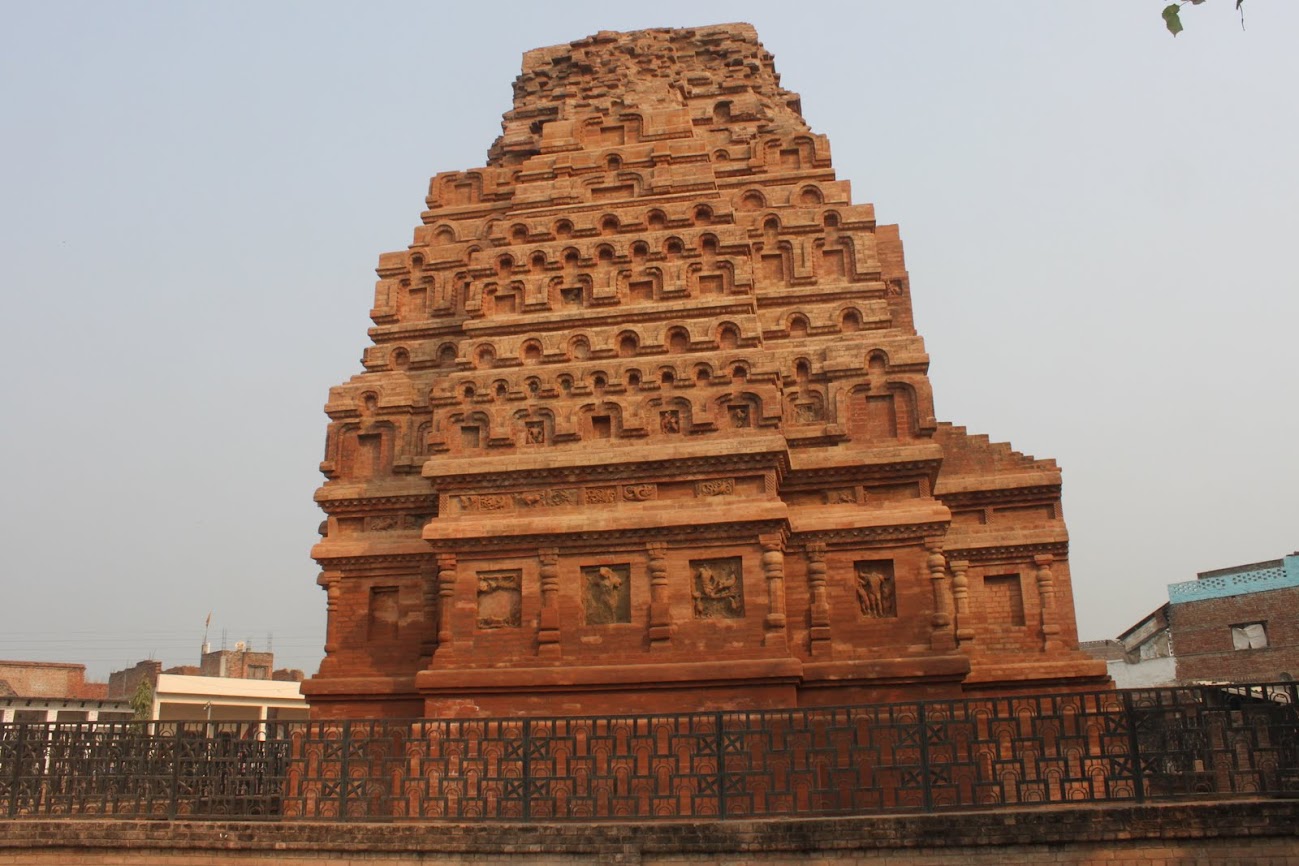 Cunningham tells that the shikhara was destroyed by lightning a few years before 1857 exposing the upper chamber of the garbha-grha to the sky. As none of the modern scholars has seen the original shikhara therefore the reconstruction of the same depends on architectural conjectures. Cunningham, based on his studies and observations, calculates the total height of the shikhara as 44 feet. Percy Brown provides the first conjectural drawing of the shikhara and he mentions that the porch and the garbha-grha were covered by domical vaults with the main shikhara measuring 70 feet tall.6 R Nath, keeping the height of 70 feet, adds that the shikhara top was surmounted by an amalaka.7 However, it should be noted that no amalaka was found in the debris of the temple. Zaheer8 works out the total height of the temple about 50 feet but not more.

The temple is embellished with terracotta panels on the outside. The decorative panels are inserted at various levels in different tiers. No decoration is provided till the adhisthana (vedibandha). Above it runs a frieze of panels interspersed between pilasters. The panels at this level are the largest in size. Zaheer counted a total of 143 terracotta panels belonging to the temple, 128 panels are in situ, 2 in the Indian Museum, Kolkata, 12 panels in the State Museum, Lucknow are identified as belonging to the Bhitargaon temple, and 1 panel photographed by Cunningham is no more traceable. There are many representations of Vishnu and Krishna amongst the panels. Krishna is shown slaying Vrshabhasura in one panel and in another, he is subduing elephant Kuvalayapeeda. In one panel he is shown seated with his elder brother Balarama, the latter is shown with a serpent hood above his head. Harle10 suggests that it could also be a representation of Nara-Narayana instead of Krishna-Balarama. Vishnu is shown mostly with four hands either riding Garuda, standing with ayudhapurushas Gadadevi and Chakrapurusha, or in a posture of slaying demons. elephant. In one panel, we find an eight-armed image of Vishnu. Harle11 suggests that there appears a boar’s head on the proper right and correspondingly there would have been a lion’s head on the proper left. However, examining the panel this does not appear to be the case instead, there appears to be a halo behind his head. Vishnu is also present as Varaha in the west bhadra (central) niche. This led Cunningham to suggest that the temple was dedicated to Vishnu. Zaheer disagrees with this, stating that as Ganesha is present in the bhadra in the south, the temple may also be devoted to Shiva.

The above panel was found by Cunningham lying detached near the temple and evidently fell from one of the niches above. Cunningham sent the panel to the Indian Museum, Kolkata. The panel shows Vishnu lying over the coils of Ananta (Shesha), the latter also makes a hood canopy over the God. Brahma, shown with a single head and seated over a lotus, is shown emerging behind Vishnu, the lotus stalk is emerging from Vishnu’s navel. Vishnu is shown with two hands, sparsely dressed, and with minimal jewelry. In the right extreme are shown two demons, Madhu and Kaitabha. Pathak12 opines that this image falls under the abhicharika (incantation) category, such images are utilized for sinister purposes. He tells that the overall composition of the image is strange as the posture of Vishnu suggests him being tired, sickly, and with closed eyes while Brahma is looking at him in a terrified state. On the other hand, Madhu and Kaitabha are depicted with a bold stance carrying their clubs and keeping one hand in abhaya (freedom from fear) like mudra (gesture). However, the scene may represent the instant when the demons were approaching the god while the latter was asleep on the coils of Ananta. There must be some specific reason for an abhicharika image and ideally, these images are not installed in the temples of general use. Therefore, an abhicharika image being placed in a niche in a temple where all other images are of non-incantation character does not make a strong case.

Many Shaiva themes are also found in the terracotta panels of the temple. Ganesha takes a prominent place in the bhadra niche in the south. Shiva as Gajasura-samhara-murti appears in one panel. Though the features in this panel are much obliterated however his stretched hands across the panel holding an elephant are very evident. In another panel, Shiva is shown seated with Parvati, probably playing a game of dice. Below the couple is carved many ganas witnessing the happenings over the Kailasa mountain abode of Shiva. The panel has suffered majorly from the last documented image where we find the figure of Parvati is much obliterated.

Among the goddesses, we find Ganga and Yamuna placed at either side of the main entrance. In one panel is present Gaja-Lakshmi where the figure of the goddess is much obliterated however remains of elephants are very evident. In another panel is found four-armed Durga slaying Shumbha and Nishumbha. There are many secular themes also represented on various panels depicting amorous couples, wrestlers, mythical animals, ascetics, and peeping heads within a gavaksha (window).

The dating of the temple is based upon its architectural and sculptural style as no foundation inscription has been found. Cunningham puts the temple not later than the seventh or eighth century CE suggesting it could be even older. Vogel shifts the dates three centuries earlier to the Gupta period of the fourth or fifth century CE and this became the standard as seen in all later studies. Harle13 mentions the large size of bricks, reaching 48 cm x 13 cm x 5 cm, would alone establish the Gupta date of this temple, and the date of 450 CE would seem the latest for this temple. Joanna Williams14 places it in the middle two-quarters of the fifth century CE, probably before 460 CE.