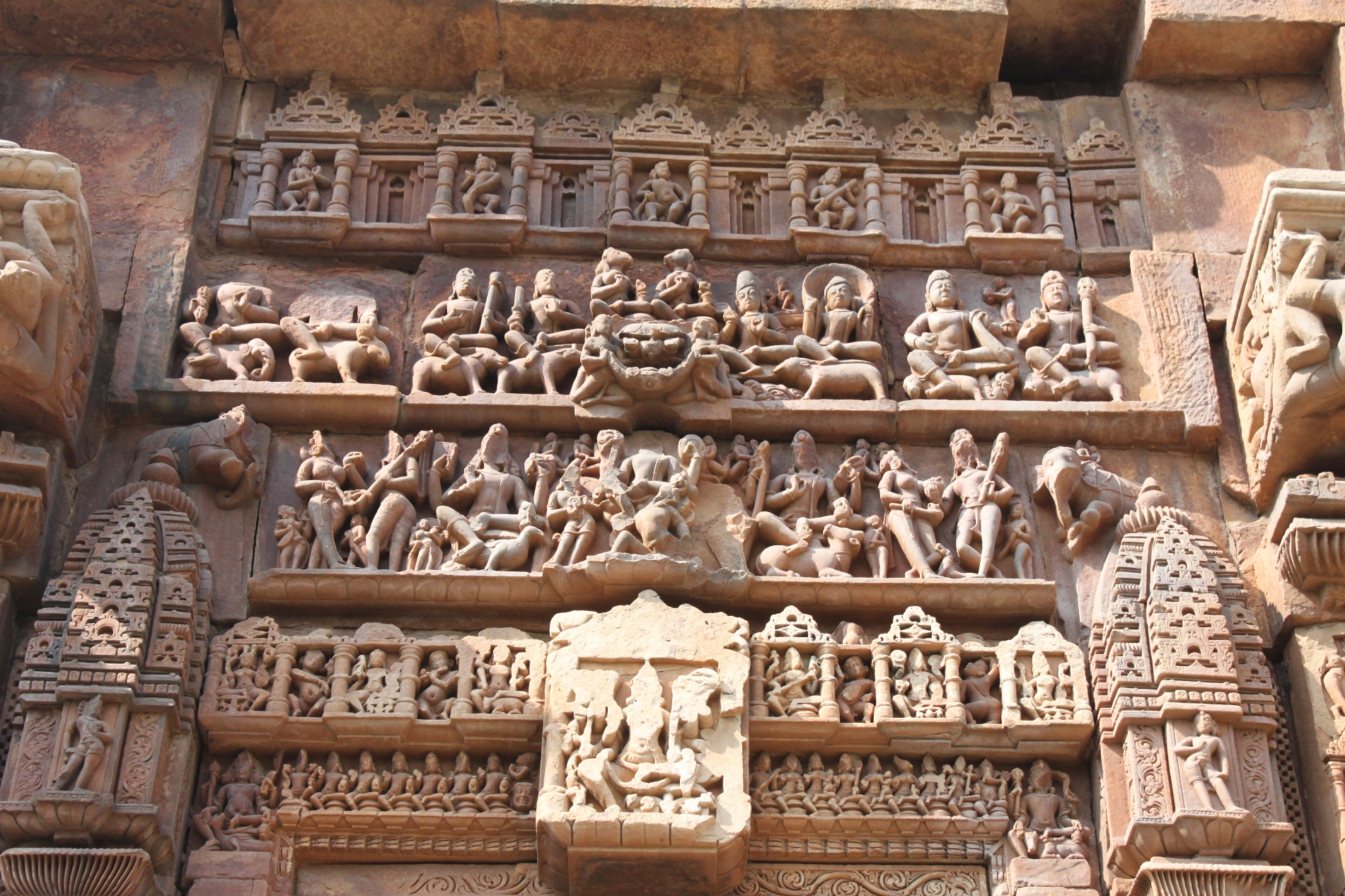 Bundelkhand region, comprising parts of Uttar Pradesh and Madhya Pradesh states, is deeply engulfed with the romance of rugged medieval period forts and palaces, the legacy of which still echoes all around the region. Stories of valor and chivalry, still very much in vogue, are the testimonials of the splendors of that by-gone era. Bundelkhand is known for its brave Bundela rulers who ruled from fifteenth-century CE onwards till the British occupation. Barua Sagar is a small village situated in the Jhansi district of Uttar Pradesh. It is situated at the banks of the Barwa river, a tributary of river Betwa. A large lake, Barua Sagar Tal, was built by the king of Orchha, Raja Udwat Singh (1689-1735 CE). He also built embankments around it. These embankments are built-in steps style and are a marvelous piece of public architecture. A fort commanding an excellent view of this lake and surrounding landscapes was also built by the king.

Monuments – There are few monuments of interest in the village. The fort over a hillock commands a majestic view of the surroundings. There are ruins of two Chandella period temples, locally known as Ghughua Math and Gandai Temple. Ghughua Math is built in granite and has four cells, each fitted with doorways, of which three have an image of Ganesha and the fourth has an image of Durga.

Jarai Math Temple – The first modern reference of this temple is found in the antiquity list of A Fuhrer1. This east-facing temple is the most important monument of the village. It is located on the outskirts of the village, on Jhansi-Mauranipur road. The temple follows the panchayatana (quincunx) pattern. The central temple consists of a rectangular garbhagrha (sanctum), an antarala (vestibule), and a mukha-mandapa (portico), the last has not survived. Temples with a rectangular garbha-grhas are usually built to accommodate either for an image of Sheshasayi-Vishnu or the images of Sapta-Matrikas however, that does not seem to be the case here. Among its four subsidiary shrines, only two have survived. The subsidiary shrines and a part of the shikhara (tower) of the central temple were rebuilt during the Bundela period of the 17th century CE in the Mughal style with pyramidal roofs.

The vimana of the temple is in pancharatha style. The shikhara has lost its one-third part and only five stories have survived. The grandiose sapta-shakha (seven bands) doorway of the garbhagrha is exquisitely carved with various figures and icons across its seven tiers of lintels. The uppermost tier has dancers placed within narrow niches. The tier below has ashta-dikpalas (eight directional guardians), four on either side and a lotus pedestal in the center. Two figures of Varahi, each holding a child and seated opposite to each other, are placed over the lotus pedestal. Vijay Kumar2 takes these images as not of Varahi but of some bird-faced mother goddesses. Krishna Deva3 is of opinion that these two goddesses could be the Bagulamukhi goddess.

The tier below has Brahma, Vishnu, and Shiva and two interesting Annapurna icons at the terminals. On the left terminal is shown two females standing facing each other. The female on the left is holding a spoon in a posture of giving alms while the female on the right is holding a bowl to received alms. Generally, in the iconography of Annapurna, it is Shiva shown receiving alms from Parvati. The female figure receiving alms in this sculpture may be a shakti of Shiva, probably Bhairavi. Bhairava is closely associated with Shiva-Bhikshatana iconography which Annapurna is also a part of. The sculpture on the right terminal has Parvati and Shiva in their usual positions and posture however it has an interesting feature. A bird is sitting over the spoon held by Parvati, and another bird sitting in the bowl held by Shiva. It suggests that the bird is part of alms in this case.

The fourth tier from the top has six goddesses, Lakshmi, Ambika, a mutilated figure of a four-armed goddess, Saraswati, Chakreshvari, and another mutilated four-armed goddess. Ambika is holding a child and sitting under a mango tree. Chakreshvari is seated over a lotus pedestal holding four chakras (discus). Krishna Deva4 suggests that these could be Tantric Vidyadevis. Ambika and Chakreshvari are Jain goddesses, and their presence suggests an amalgamation of Jain and Hindu iconographies. The reason behind this may be that the sponsors of the temple were of divergent faiths and included their respective icons in the overall scheme of this doorway. The tier below has Nava-grahas (nine planets) on the left and sapta-matrikas with Vinadhara-Virabhadra and Ganesh on the right. In the center, lalata-bimba is a mutilated figure of a sixteen-armed goddess.

The door jambs are composed of seven shakhas (bands), patra-shakha, pushpa-shakha, rupa-shakha, stambha-shakha, pramatha-shakha, mithuna-shakha, and bahya-shakha. The patra and pushpa-shakhas start above the figures of river goddesses, Yamuna on the left jamb and Ganga on the right jamb standing over their respective mounts. Next to these river goddesses are the dvarapalas (door guardians). The sculptural panels on the rupa-shakha are dominated by the Annapurana icon. It is carved seven times in total, four on the left jamb, and three on the right jamb. These seven panels display a variety of differences. While the main theme remains constant, Shiva receives alms from Parvati, in some panels he is shown without clothes and in some with clothes of varying degrees. In a few panels, Shiva is accompanied by a dog, suggesting his Bhairava aspect.

The stambha-shakha has a miniature temple at the top and it terminates above the dvarapala images. The pramatha-shakha has panels showing various amorous couples in different positions and postures. On the left doorjamb, at the bottom of the pramata-shakha, and above the apsaras next to the dvarapalas, is shown Lakulisa seated over lotus pedestals with his four disciples. The corresponding space on the right jamb is decorated with figures of dancers.

In the rathika-niches over the adhisthana are found Durga and Chamunda in the south, Harihara and Kartikeya in the west, and Shiva-Kalyanasundara-murti, Ganesha, Ardhnareeshvara, and Durga-Mahishasura-mardini in the north. Ashta-dikpalas (eight directional deities) are placed in their respective directions over the karna niches. Various apsaras and lady-child icons decorate the niches on prati-bhadra and recesses. There is one bhadra niche each in the south and the north but two bhadra niches on the west as the rectangular garbhagrha allows extra space in the west to accommodate two niches. The bhadra-niche in the south and the north is provided with a mukha-mandapa. Over the niches on the jangha are found Narasimha in the south and Surya riding over a seven-horse chariot accompanied with Danda and Pingala in the west.

The rectangular sanctum, female dvarapalas inside the antarala, various goddesses around the temple vimana, and a sixteen-arms goddess over the lalata-bimba suggest that the temple was dedicated to some goddess. Krishna Deva suggests that the temple was dedicated to Jara, who is an ancient Yakshi of Rajagriha, and hence the temple is called Jarai Math. Jara is mentioned in the Mahabharata in the connection of the birth of Jarasandha. It is told that she was a rakshasa woman living upon flesh and blood. Once she found the two body pieces of baby Jarasandha on a crossing. When she joined the two pieces the baby came to life and roared terribly bringing the king Vrihadratha and the queens to the scene. Jara decided not to kill the baby as she lived within the dominion of the king and the latter was desirous of a child. She assumed a human form and gave over the baby to the queens. When asked by the king, Jara introduced herself as a rakshasa woman created by Brahma and named Grihadevi. She was worshipped by the households by painting her images over the walls. People who did not worship her would face destruction and other hardships in their life. It is generally believed that the demon Jara got deified and attained the status of a goddess in due time. Reminiscences of the same may be observed in the Jara-Jivantika cult prevalent in Maharashtra.

The presence of the multiple Annapurna icons over the temple gives food for another thought process. The legend goes that once Parvati got angry over Shiva putting the whole world devoid of food and grains. However, Parvati was not able to bear the grief watching her subjects crying and begging for food. She became Annapurna and opened a kitchen in Varanasi to distribute food. The world was restored to its previous state once Shiva came to that kitchen begging for food and receiving alms from Parvati.

Baruasagar is a part of the Bundelkhand region and droughts, reduced/delayed rainfalls, and famines are not new to this region. As per a NIDM (National Institute of Disaster Management) report, Bundelkhand experienced a major drought every 16 years during the 18th and 19th centuries CE5. The situation may not be very different during the 9th-10th century CE when this temple was constructed. The temples were the social institutions of that period and the sculptures over these temples were a device to propagate a desired message to the masses. These multiple Annapurna sculptures were part of that device to propagate the message of food distribution during troubled times.

In absence of a foundation inscription, the dating of the temple is carried out based on its architectural style. R D Banerji6 dates the temple of the middle 10th century CE of the Pratihara rule while Krishna Deva assigns the temple to the very close of the 9th century CE.

Inscriptions – No important inscription is found except a pilgrim’s record which reads ‘Padmadev’, probably the name of the pilgrim.

How to Reach – Barua Sagar is on Jhansi-Mauranipur road which further connects to Khajuraho. It is about 19 km from Jhansi, the latter is the nearest railway station. Gwalior is the nearest airport.