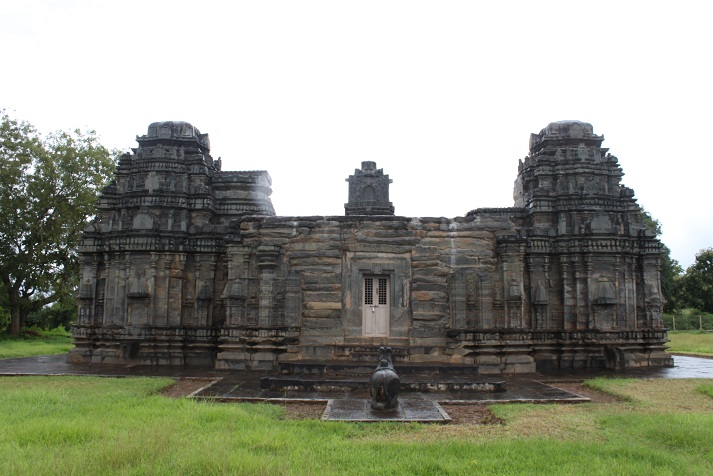 Introduction – Bandalike, referred as Bandanike or Bandhavapura in inscriptions, is situated in Shivamogga district of Karnataka. As per the inscriptions, the town was the capital city of Nagarakhanda-70 region,   which was included in Banavasi-12000 province. Banavasi was the cradle of the early Kadamba rulers therefore they would have ruled over Bandalike at their time.

The town started gaining importance since tenth century onwards. The earliest inscription, dated 912 CE, found here refers itself to the rule of the Rashtrakuta king Krishna II. During this period, the town was governed by the Sattara chiefs. It is told that Jakkiyabbe, wife of Nagarjuna Sattara, performed sallekhana here at Bandalike. Bandalike was already established as a celebrated Jain tirtha by then.

During the reign of the Western Chalukya king Vikramaditya VI, region Nagarakhanda-70 was under maha-mandaleshvara Bopparasa. He is said to be born in the Kadamba-vamsa. Many inscriptions of this Bopparasa and his wife, Siriya-devi, have been found here. Bopparasa had a long reign and made various grants to temples and bastis.

The Western Chalukyas, under Somesvara IV, ousted the Kalachuris and reinstated themselves at Basavakalyana. An inscription, dated 1185 CE, here suggests revival of the town under the Western Chalukyas. But it was a short lived rule as they were soon ousted by the Hoysala Ballala II.

Goddess Banashankari, also called Mayadevi, became the patron deity of the town. As per a legend, Mayadevi, a creation of Parvati, was sent to the famous saint Allama Prabhu to test him. Allama Prabhu did not fall for it and changed her into a divine form.

As evident from above, that the inscriptions at Bandalike are good resources to understand the political history of the Karnataka region. Starting from the Rashtrakutas, to the Western Chalukyas, to the defeat of the latter in the hands of the Kalachuris, later reinstatement of the Western Chalukyas, fatal blows from the Hoysala Ballala, expansion of the Suenas and the final authority of the Vijayanagara empire. Inscriptions at Bandalike are the mute witness of this changing political drama.

R Narasimhachar visited Bandalike in 1911 and he writes, “Bandalike is a village overgrown with teak trees, containing a number of ruined temples, several of which are fine structures both in design and execution”. He described in brief three temples of the town, Shantinatha Basti, Trimurti Temple and Anekalsomaiya Temple.

Inscriptions – There are about 31 inscriptions found here. All these are published in the Epigraphia Carnatica vol VII.

Monuments – There are many ruined temples in this village. The main three temples, Shantinatha Basti, Trimurti and Someshvara Temple are under the protection of ASI (Archaeological Survey of India). Veerbhadra temple, Sahastralinga Temple and Hanuman temple are other main temples in the village.

Shanthinatha Basadi – This structure is located on the right side of the tank, locally known as Nagara-kere or Nagaratirtha. The basti consists of a garbhagriha (sanctum sanctorum), an antarala (vestibule), a four pillared mahamandapa (hall) and a thirty two-pillared mukhamandapa, all in north-south orientation. The mukha-mandapa has entrances on its three sides. Slanted back-rest type arrangement is present on the parapet wall of the mukha-mandapa.

There is no image now in the garbha-griha but once there would have been a Jain tirthankar image, probably of Shatinatha. The well-carved antarala doorway is provided with perforated jalis (screens) on its either side. This kind of jail work was very prominent during the Chalukyas, specially the Western Chalukyas.

However, it is confirmed that Bandalike had assumed the status of a Jain tirtha by that time. If the present basti was not one of the reason of this then which other temple was responsible? There is no other surviving Jain temple in the village. In this situation, it would be acceptable if we assume that Shantinatha basti was existing by the start of the 10th century CE and was also instrumental in taking the status of the village to a Jain tirtha.

Shimoga Gazetteer mentions that this basti cannot be associated with the Rashtrakutas as it differs in style and design. A later epigraph, dated 1200 CE, records repair and maintenance of Pancha-basti of Hiriya-Mahalige, therefore it does not apply to this basti. It is curious why such an inscription is engraved on a pillar of the mandapa of this basti where it mentions repairs of another basti. Another inscription, dated 1204 CE, mentions grants and endowments by Boppa-setti, the ruler of Nagarakhanda-70 region, to this basti.

Someshvara Temple – Also referred as Anekal Somayya and Boppesvara temple, this temple was built by Boppa Setti, the ruler of Nagarakhanda-70, in 1274 CE. The temple is consisted of a garbhagriha (sanctum), an antarala (vestibule), a pillared mandapa (hall) with an insignificant porch, all arranged in east-west orientation. The porch has not survived. The entrance doorway to the mandapa had four sakhas (divisions). At the base of it are depicted dvarapalas and female figures. On the lalatabimba of the lintel is Gajalakshmi.

On either side of the above door are highly ornate, sculptured, screens which have perforations alternating with narrative friezes depicting select episodes from epics, Ramayana and Mahabharata. The explanation of the scenes are provided below.

Scenes on the left side screen (from bottom to top)

Scenes on the right side screen (from bottom to top)

Inside the sanctum is a Shiva-linga with facing Nandi in antarala. The antarala doorway has two perforated screens on is either side. On the lalatabimba of antarala doorway is Shiva in dancing mudra. He is accompanied with Ganesha, Brahma, Vishnu and Mahishasura-mardini. In the mandapa are provided niches, two each on either side, however all are empty at present.

Just behind this temple, there is a mandapa known as Mahanavami mandapa. An inscription found here, dated 1207 CE, mentions grant from the Hoysala queen, Abhinava-Ketala-Devi, the wife of the Hoysala king, Ballala II.

Trimurti Narayana Temple – Trimurti Narayana temple is the largest temple at Bandalike. This east facing temple is trikutachala (triple celled) in design. All the three cells are adorned with antaralas (sukanasi), which connect to a common mandapa. The tower of the western cell has fallen, other two towers are in good state of preservation. West and south cells have Shiva-lingas while the northern cell has an image of Vishnu.