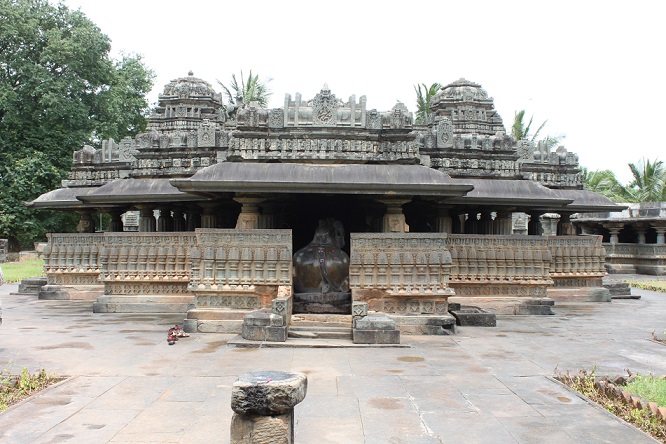 Balligavi is an open air museum of the Karnataka temple architecture and the cradle to the Kalamukha and Lingayat (Veerashaivism) sects. Though now reduced to a small village, it used to enjoy the status of a royal city in its heydays when it served as the capital city of Banavasi-12000 vice-royalty, the status it enjoyed for over a thousand years. The city was famous as Dakshina Kedara, because of its Kedaresvara temple which is compared with Kedarnath in North India. The importance and beauty of this village is evident in its inscriptions. It has been extolled for its inspirational beauty and surroundings. Alas! nothing is left of its past charms.

The town has been variously referred as Belgami, Belligave, Balligave, Balligame, Belligamve, Ballegavi, Baligrama, Balipura and Balinagara in its inscriptions. The town is still referred with various names as Balligavi, Belligavi, Ballegavi and Belagavi. Balligavi is situated in Shikarpur taluk of Shimoga district in Karnataka. Brimmed with natural beauty, idyllic atmosphere and away from the very meaning of hustle and bustle, Balligavi embraces you like your grandmother’s village. I visited this place during monsoons and believe me, this would be best season to visit if you do not mind incessant but mild rains. The slippery pathways in middle of fields, taking you to its innumerable temples is an experience in itself.

Balligave is compared with Amaravati, Bhogavati-pura and Alkapura in its inscriptions. There has been many instances where this place has been extolled for its natural beauty. An inscription describes this royal city of Banavasi as “with clusters of lotus, with swarms of bees, with mango groves filled with beautiful swans, parrots and cuckoos, surrounded with climbing betel vines, areca palms, begonias, and muchukunda, Balligave was like the twining curls of the lady the Kuntala country.”

Another inscription praises Balligavi as, “With lines of temples of Jina, Rudra, Buddha, and Hari, decorated with gold and jewels, Bali-nagara is well known as the place of five mathas. Among the many countries in Jambu-dvipa, the most excellent is Bharata land, in it is the Kuntala country, in which like perpetual spring is Banavase, and in the Vanavasi country is Bali-grama, frequented by Bhavyas.”

As per a legend, Balligavi was the city of asura (demon) king Bali from whom it got its name Balipura. King Bali, though a rakshasha (demon), was a pious king known for his charities. When king Bali won over the heaven from the devatas, an immediate need arose to restore it back to the devatas.  The task was left to Lord Vishnu who appeared on the earth in his Vamana-avatara. In his vamana-avatara, the lord won over king Bali and restore the heaven back to the devatas. This episode is told in various Hindu mythological literature and epics.

This legend is also supported in an inscription found here. This inscription, dated 1181 CE, tells how the raja-guru Vamasakti-deva explained the greatness of the city. He told, “The rakshasa Bali having in his time dwelt in this kshetra, made gifts and in the course of manvantaras been considered as Indra himself, I literally knows not how to praise the greatness of Balipura”.

An another legend, links this place with the Pandavas of Mahabharata. An inscription, dated 1036 CE, tells that the Pandavas, while performing Rajasuya sacrifice, after taking tributes from Vibhishana of Lanka, visited Balligavi and setup the Pancha-Lingas. From Mahabharata, we know that Sahadeva was assigned to conduct the southern conquest during the Rajasuya. Sahadeva did not visit Lanka but sent his messengers. Vibhishana, the king of Lanka, sent back the messengers with bounties paying tributes to the Pandavas. However, Balligavi does not find any mention in Mahabharata.

Balligavi is also famous as the birth place of Allama Prabhu, a twelfth century CE Lingayat saint. He with Akka Mahadevi and Basavanna constitute the Trinity of Lingayatism. Akka Mahadevi, was born in Udutadi, situated near Balligavi. Thus Balligavi held a special regard for the Lingayats (Veershaivas). Being an ancient centre of the Kalamukhas, it provided ideal environment fostering the Lingayat movement.

Harihara, the first poetic biographer of Allama Prabhu, tells that Allama was born in the caste of temple-performers in Balligavi. He grew up into a handsome youth, expert in playing maddale, a kind of drum. While performing once at the temple he fell in love with the temple dancer Kamalathe. She reciprocated, and they got married. But misfortune stroke the couple, a fatal illness took away Kamalathe. Like all legendary lovers, Allama went insane. This lasted, till he discovered a hidden garden and temple where his future guru Animisha was waiting for him. Initiated into secrets of ‘linga’, Allama became enlightened.