Introduction – Located on the eastern bank of river Kshipra, Ujjain is one of the most sacred city of India, one amongst the seven sacred cities, sapta-puris, as per ancient literatures. It was known as Ujjaini, Avantika, Amravati, Pratikalpa and Kumudduity in old times. Ujjain has been the Prime Meridian for Hindu geographers since the 4th century BC. Ujjain has been an excellent center for study and research. Rishi Sandipini’s ashram (hermit) was situated here only, where Krishna and Balrama studied in Mahabharata times. At that time Ujjain was the capital of Avanti kingdom. Ujjain was a major center of mathematical, astronomical and Sanskrit literature research. Mathematicians like Brahmagupta, Varahamihira and Bhaskaracharya graced this city wither their presence and works. Sanskrit scholars like Bhasa, Siddhasena Divakar, Bhartahari, Kalidasa, Amarsingh, Shudraka, Banabhatta, Mayur, Rajshekhara, Shakaracharya, Vallabhacharya also worked in Ujjain.

Sixth century BC, Ujjain was under Chandpradhyot, a very efficient and mighty emperor. Love affair between his daughter’s daughter Vasavadatta and Udayan, king of Vatsa, is immortalized in Sanskrit literature. After Pradhyot dynasty, Ujjain came under Mauryas. Emperor Chandragupta Maurya visited Ujjain in his time. Ashoka was the viceroy of Ujjain and he married a girl from Vidisha during that post. After Mauryas, if came under Shakas and Satavahanas. The first Shaka attack was spoiled and put back by King Vikramaditya in first century BC, but later on Shaka captured Ujjain. Chastana and Rudradaman I were two important king of that dynasty. Guptas took Ujjain back from Shakas and hence started new phase of progress in financial and industrial areas. After Guptas, Ujjain witnessed military and political competition among Kalchuris, Maitrika and Later-Guptas. Malwa’s Parmars solidified this region from 1000 AD to 1300 AD as Ujjain witnessed stable period under their control. Siyaka II, Manjudeva, Bhojaraja, Udayaditya and Narvarman were few great kings from that period. Khiljis defeated Parmars and took control of Ujjain, and thus started widespread destruction and systematic desecration of temples. But in Akbar’s time Ujjain became capital of Malwa region and saw growth in religious and construction activities. In early eighteenth century AD, Ujjain came under Sindhias and they made it their capital. The capital was moved to Gwalior in 1810, but Ujjain continued its cultural renaissance. In 1948 Gwalior stated moved into Indian Union.

Monuments – Ujjain has many religious and ancient monuments. However many of these shrines are still in use and are modified since time to time. This has reduced the ancient appeal from the shrines. I visited Mahakala Jyotirlinga however the structure is very recent and does not interest from architectural point of view.

1. Jivaji Orservatory – This observatory was constructed by Sawai Raja Jaisingh, king of Jaipur, appointed as governor under Emperor Muhhamed Shah of Delhi at Ujjain. He was not only a efficient king but a very good astronomer himself. He translated many Persian astronomical literature as well. Emperor Muhhamed Shah ordered Jaisingh to build observatories, on the same plan as of Samakand observatory built by Mirza Ulooq Beg, a grandchild of Taimur, at Ujjain, Jaipur, Delhi, Mathura and Varanasi. Mathura and Varanasi observatories have not survived, but Delhi, Jaipur and Ujjain are still there. The observatory of Ujjain is of great importance as the city lies on the Tropic of Cancer. The position of Ujjain has been changed due to slow diminution every year in the maximum obliquity of the Ecliptic, resulting that the sun goes towards the North from the zenith of the Ujjain. About 9660 years ago, when the maximum declination of the Sun and the latitude of Ujjain were equal, the Sun turned towards South after completing its farthest North going at the zenith point of Ujjain. It was the point where the meridian line of ancient Lanka (different place from modern Sri Lanka) crossed the Tropic of Cancer. Therefore the meridian line of Ujjain became the prime Meridian of India, Greenwich of India. This observatory is the only one which is still in function, Jaipur and Delhi ones are not in much use these days. Maharaja of Gwalior, Madhavrao Sindhia, renovated this observatory in 1923 and since then this is functioning. 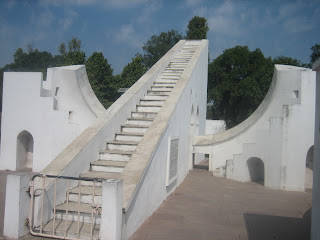 a. Samrat Yantra – The upper planes of the two walls on the sides of the steps in the middle of this instrument are parallel to the axis of the Earth. Hence the Pole Star is visible at night in the direction of these planes. To the east and west of the wall, there are two quadrants which are in the plane of the celestial equator. Hours, minutes and fraction of a minute are engraved on these quadrants. When the sun shines in the sky at the point on which the shadow of the edge of the wall falls, gives directly the apparent local time of Ujjain. The correction in minutes engraved on the stone slab to the east and west side of the instrument when added to this apparent time will give the Indian Standard Time. This instrument is mainly used to find out the declination of any celestial of i.e. its distance from the celestial equator towards north or south. First find out the particular point on the edge of the quadrant from where the center of the celestial body could be observed to coincide with the edge of the wall. The reading at this point of the wall gives the declination. 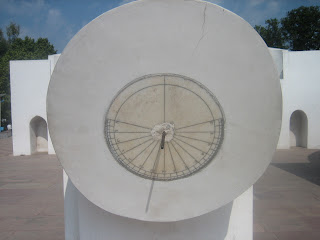 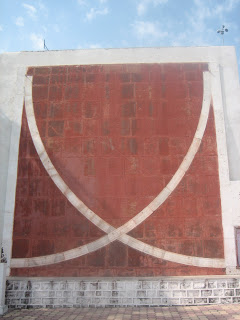 c. Bhitti Yantra – This instrument is built in the plane of the meridian circle (the circle joining south, north and zenith point). It is used for observing the zenith distance of any celestial body (corresponding to its mid day). There are two pegs at the top of instrument fixed with string in the center of graduated quadrants. When the object is in the south of the prime vertical (the circle joining the east, west and zenith point) the southern peg is to be used, otherwise the northern peg. At the time of the transit of the celestial body, the observer has to keep his eye on the string and move it forward or backward to determine the particular position of the string at which the center of heavenly body could be seen through the point of the intersection of peg and the wall. The reading of the quadrant at this position of the string gives the zenith distance. 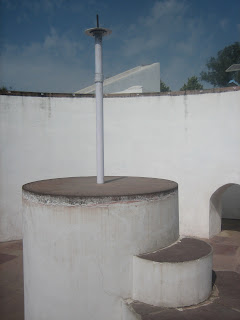 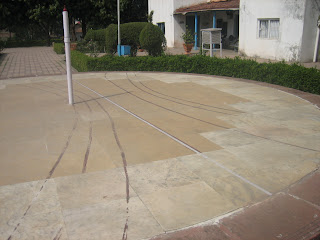 e. Shanku Yantra – At the center of the circular platform, a vertical gnomon is fixed. The paltform is in horizontal plane. There are seven curved lines, representing twelve zodiac, drawn on this circular platform. These lines also show 22nd December as the shortest day, 21st March and 23rd September as equal days and 22nd June as the longest day of the year. With the help of the shadow of the gnomon the angle of elevation and zenith distance of the sun can be determined. On equinoctial days the mid-day shadow of the gnomon represents the lattitute of Ujjain.

There are many other religious temples and shrines in Ujjain, however I did not visit all those shrines as my main objective was to visit Food and Accommodation – Ujjain has many options of accommodation suiting every budget. There are plenty of food options as well, however getting non-veg food will be little harder as Ujjain keeps the image of religious town. I stayed at Indore and visited Ujjain as a day trip.

How to Reach – Ujjain is a railway-head connected to Bhopal, Delhi etc. The nearest airport is Indore. Ujjain is connected via buses from all major towns of Madhya Pradesh.