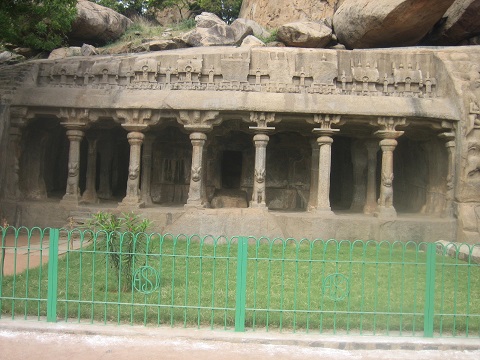 Mamallapuram – Workshop of the Pallavas

This is the largest cave-temple at Mamallapuram and is located adjacent to the Great Penance relief. From outside the excavation appears to be more or less finished, however from inside it is very much left incomplete. The cave façade is supported on six pillars and two pilasters. The cornice of the facade has ornamentation of oblong shrines, nine in total, connected with cloisters. However, the regular kudu-arches (dormer window) usually found over cornice are missing here.

The pillars and pilasters of the front row have seated-vyalas base with cylindrical shaft above. An unique feature of these pillars is three rearing vyalas, one facing front and two facing sides, being placed over the abacus of these pillars. The vyalas on the sides are shown with riders. This element is not found in any other Pallava cave temple, except in the porch pillars of Mahishasuramardini Mandapa and in structural temples of the Pallava period. Interestingly, this element is also found in the Badami caves.

Another row of pillars, consisting of four pillars and two pilasters, follows the front row, dividing the hall into two bays. These pillars are simple cylindrical shafts without seated vyalas as bases. Behind this is excavated a cell in the center, occupying space of three pillars of the front row. Beyond this cell, on either side, are provided pilasters in-line with the other rows. From the plan, it appears that the designers thought of providing an ambulatory path around this central shrine however the work was left incomplete.

Srinivasan1 suggests that this excavation should be assigned to Parameshvaravarman I, or to his successor, Narasimhavarman II Rajasimha. His opinion is based upon the rearing vyala element which became a characteristic element in the structural temples of Rajasimha period.