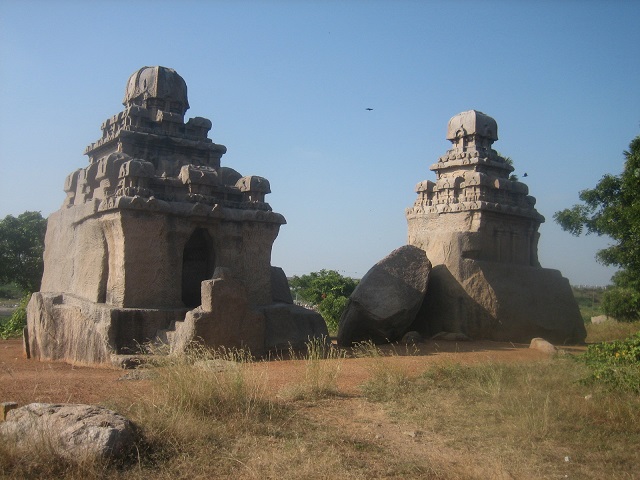 Valayankuttai Ratha – This ratha is located near the Buckingham Canal, on the edge of a pond, Valayankuttai (fisherman’s pond)1 and thus named after it. This incomplete ratha faces east and its northern side is most complete. It is a dvi-tala (double story) shrine topped with a square shikhara. The square shikhara puts it under the Nagara category. This shikhara has nasikas (arch) on each face, each nasika contains a mini shrine inside. The ratha is composed of a mukha-mandapa followed by garbha-grha.

The entrance of the mukha-mandapa is flanked by two pillars and two pilasters. The base of all is left incomplete, and from the remains it appears that the idea was to have a rectangular base instead of usual lion-base theme. Cornice above is in form of a kapota carrying usual gavaksha (kudu arches) decoration. Gavakshas have architectural elements inside but not a human head as seen elsewhere. Both the stories have a regular arrangement of oblong (sala) and square (kuta) mini shrines. Gavakshas on other sides, apart from entrance, have been connected below with two pilasters forming a niche projecting forward. Each face has two such projecting niches, except the eastern face which has a projecting mukha-mandapa in front. This ratha is helpful in understanding the construction mode, top to down, where the carving starts from the top and moving downward in stages.

Pidari Rathas – These two incomplete rathas are located near a village goddess Pidari Temple, and named after it. Lockwood2 mentions that Pidari is a Tamil name for goddess Kali. One ratha faces east and the other faces north. Both are dvi-tala (two story) vimanas, upper part is complete but the lower portion is very much left incomplete. Both of the rathas are carved in different profile, as one has a square shikhara and another has an octagonal shikhara.

The ratha with a square shikhara has a projecting mandapa in front. The shikhara has nasikas (kudu -arches) on its each face. Regular arrangement of mini shrines, oblong and square, at each story separates each other. Six gavakshas (kudu arches) are on the cornice of the ground floor. This arrangement results in a big niche at each face of the wall. The niches on the side walls are adorned with makara-torana with double bends, very similar to the decoration of the Draupadi Ratha. The ratha with octagonal shikhara also has a mandapa in front. An entrance is carved out, though in a very crude manner. There are six gavakshas arches on the cornice, suggesting two pillars and two pilaster arrangement. The space between the pillars and pilasters would be forming a niche to position the dvarapalas. This same configuration is followed in the first story. We find here six gavaksha arches, forming two niches at the terminals. These two niches are housing two dvarapalas, partially visible to a visitor. The second story supports the shikhara, which has a bhuta-mala (ganas) running around, just below the shikhara. The ridges of the shikhara are decorated with floral creepers.

Ganesha Image – On the way to the Pidari Rathas, an image of Ganesha is carved out on a boulder. It might not be easy to find whether it is a Pallva period image or a later, however it appears that it does not belong to the Pallava period. A point in this argument may be the absence of Ganesha, on a large scale, in Mamallapuram, except being found at Shore Temple and among the ganas in Dharmaraja Mandapa. This suggests that Ganesha was not very popular deity among the Pallavas during the Mamallapuram period.