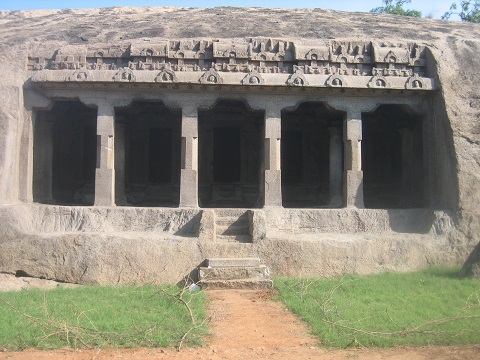 This west facing cave temple is named after the Koneri tank it overlooks. There are two side-by-side excavations, one is very much incomplete while the other one is better finished. This article is about the finished excavation locally known as Koneri Mandapa.

The front row pillars are in typical early Pallava style, characteristic of Mahendravarman I period, with top and base square section (saduram) and intervening octagonal (kattu) section. The pillars in the inner row are cylindrical at bottom topped with a multi-faceted shaft. These are slender, slimmer and have a bulbous capital at the top. The shaft is ornamented with creeper and flower designs. In the back wall of the excavation are carved five cells. All these cells are raised above the hall floor and share the same adhisthana (platform) composed of five mouldings, jagati, kumuda, lower kampa, kantha, upper kampa and parti. Three cells, central and the ones at the terminals, are projected forward and the other cells are in recess. Rock-cut flight of steps are provided for the central and terminal cells while cells in recess are without steps. All these cells have a rectangular niche in their rear walls, probably for an image in paint. All the cells are with their set of davrapalas.

The dvarapalas of the northernmost cell are much damaged, the one of the left is completed chiseled off, probably during the Vaishnava resurgence in the Vijayanagara period1 as also evident by the chakra and shankha symbols incised on the front facade. From what is left of the right dvarapala, it is very clear that they show feminine characteristics due to their slender and slimmer figures. Both have one hand at their waist and other raised above pointing towards the shrine. With these dvarapalas adoring the entrance, it is evident that the cell was probably dedicated to a goddess or some female aspect of a male god.

The next cell has both the dvarapalas much preserved. They both are shown standing facing the viewer. Both have one hand resting over their wait and one hand in suchi-mudra, pointing towards the cell entrance. The dvarapala on the right has horns behind his headdress suggesting its affiliation with Shiva where the horn-like symbol represent the trishula-ayudha-purusha2. With their Shaivite affiliation, it is evident that the cell was dedicated to Shiva or some aspect of his.

Dvarapalas of the central shrine wear large kirita-makuta and a long garland reaching till their ankles. Both have one hand resting over their wait and one hand in suchi-mudra, pointing towards the cell entrance. The dvarapala on the right has horns behind his headdress in similar fashion as of the preceding pair. This again suggests that this cell was either dedicated to Shiva or to some aspect of his.

Dvarapalas of the next cell are facing front and standing cross-legged. They have one arm resting over their hip while their another hand is on their clubs. They are provided with fierce look and appearance with their protruding tusks and bulging eyes. The dvarapalas of the southernmost and the last shrine are very similar to those of the central cell except these are not shown wearing garlands. The dvarapala on the right shows trishula prongs behind his headdress suggesting his shaivite affiliation.