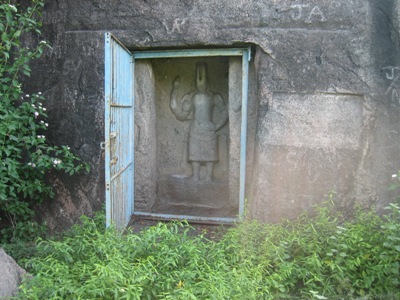 Kilmavilangai is a very small settlement in Villupuram district of Tamilnadu, small enough that it may go unnoticed even to a curious visitor. In the outskirts of the village, amidst its green fields, is a granite boulder carved with a cell containing a relief image of Lord Vishnu. This single-celled shrine is of special interest for the scholars working in the field of Pallava architecture. The credit of discovery of this cave-temple goes to Dubreuil1, who in 1915 discovered it during his quest of searching and documenting the Pallava antiquities. He writess, “It was by chance, that I discovered in 1915, a small rock-cut temple, which, from its archaic sculptures, appears to be the oldest shrine of this kind.” During his time, the temple was referred as Mukhara-Perumal temple.

A H Longhurst2 includes this shrine in his list of Pallava shrines of Mahendra period. He mentions that Vishnu is shown carrying chakra and shankha without flames suggesting that it was carved during the early Pallava period. He also points to the curious underdress, more like a short skirt or a kilt, with its folds ending just below the knees. An enhanced description and interpretation was provided by K R Srinivasan3 in his compendium on the Pallava cave-temples. 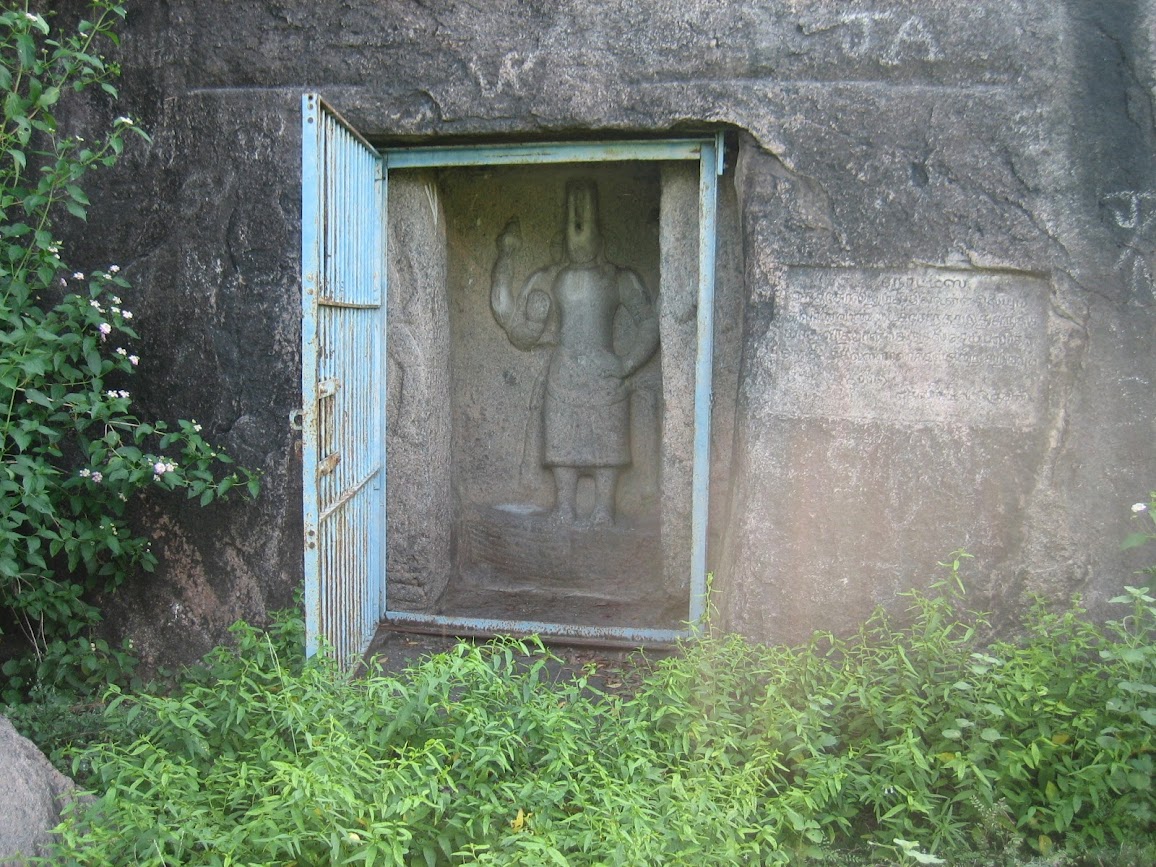 Vishnu Cave Temple – This small excavation is carried out on a small granite boulder, emerging like an outcrop amidst the green field. A cell is hollowed out on the eastern face of this boulder. Two door-jambs are provided flanking this opening. Over these jambs, dvarpalas were carved out, however these are not in bold relief but just like an outline.

A bas-relief of Vishnu is carved inside the cell. He is shown with four arms standing in sambhaga posture. He carries, in his upper right hand, a chakra (discus), depicted in prayoga-mudra, and a shankha (conch) in his upper left hand. His lower left hand is on his waist and lower right hand is in abhaya-mudra. He is wearing a long kirita-makuta over his head. His lower dress falls down till just below his knees which is rather unique and curious. Similar kilt like dresses are observed in sculptures of the Kushana period. one example image provided above. In Dharmaraja Ratha sculptures, the lower dress falls till the ankles. The lower dress of this Vishnu image can be compared with the Vishnu image in the Kurathiyarai cave temple in Kanniyakumari, credited to the Pandyas. This made H Sarkar4 to suggest that the Vishnu figure of Kilmavilangai possibly partakes of a few Pandya features like the acute bend of the lower left arm and somewhat oblong kirita-makuta. Thus the Kilmavilangai relief shares both the Pallava and Pandya  characteristics.

As there is no inscription, the dating of the cave can only be done on style and architectural comparisons. Dubreuil, the discovered the monument, assigns it to the period of the Pallava king Mahendravarman I (600-630 CE). Longhurst opines that there can be no doubt that it was excavated by the Pallavas somewhere about the 7th century CE. K R Srinivasan is of opinion that this Vishnu figure does not compare well with the other early Pallava forms. Therefore, it is evident that this should be a later sculpture, probably to the period of Narasimhavarman II Rajasimha (700-728 CE). It is a fact that we do not see something similar, single-celled shrine, among the confirmed monuments belonging to the Pallava king Mahendravarman. All his rock-cut shrines are of mandapa-type where a hall (mandapa) precedes the main cell. In Mamallapuram, we do have some single-celled shrines ascribable to the Pallava king Narasimhavarman I and his successors.

It can be safely assumed that not all the creations and constructions were done with royal patronage. Local chiefs and kings were meant to meet the demand arising from the local communities. Therefore, a small and simple single-celled shrine like at Kilmavilangai might be an attempt to meet a certain local demand and need. As it was executed by local artisans, it does not follow the patterns and styles set by the royal artisans in other monuments. While the local artisans follow the set rules for hand-mudras and ayudhas, they follow the local style for clothing and ornamentations. And this probably is the explanation for the short-skirt like underdress of Vishnu in this bas-relief.

How to Reach – Kilmavilangai is about 10 km from Tindivanam town, on Tindivanam-Vandavasi road. On your right side, you will see an arch, of Kilmavilangai village, where you need to take right turn. The cave is located not far off from that turn, on your left side.