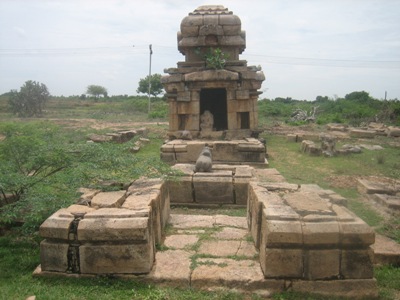 Kaliyapatti (post office Kilaiyur) is a small village located near Kunnandarkoil in the Pudukkottai district of Tamilnadu. This otherwise insignificant village holds a very important place in the development of temple architecture in the south of India. A Shiva temple, built near a tank, provides a link between the waning Pallava dynasty and the emerging Chola empire. This temple is datable in last quarter of 9th century CE however, in absence of a foundation inscription, exact construction year cannot be determined.

First modern reference of this temple is found in the Pudukkottai Museum administration report for year 19371. K V Raju, then curator of the museum, found this temple during his official tours and in the same year he publishes an article in the Journal of the Indian Society of Oriental Art2. He assigns the temple under the category of the early Chola period temples suggesting it has Pallava influence over various architectural members. He provides architectural details about the temple and observes remains of seven sub-shrines and an enclosure wall around the whole complex. Repairs of the temple complex were taken up in the next year, 1938, by the then Pudukkottai Museum department3. Three images, of Brahma, Dakshinamurti and Vishnu, each measuring 2 feet in height, were found on the ground and repaired to their respective position over the niches on the griva. The report says finding of four Nandi images, however mentions setting up of only three images, two were put on the corners over the griva and one was placed over the pedestal in front of the temple.

In the same year, 1938, excavations were carried out in seven cairns circles located in and around the village. Pre-historic pottery and iron weapons were found and collected from the same. The report mentions large circles of laterite boulders varying between 18 and 23 feet in diameter. Inside each circle is made a subterranean cell using cut-stone slabs. The slabs were of height of 2 to 3 feet above the ground. The cell is composed of a rectangular inner chamber about 8 feet square and 7 feet in depth attached to a smaller outer chamber in the east.  No traces of human bones were found. 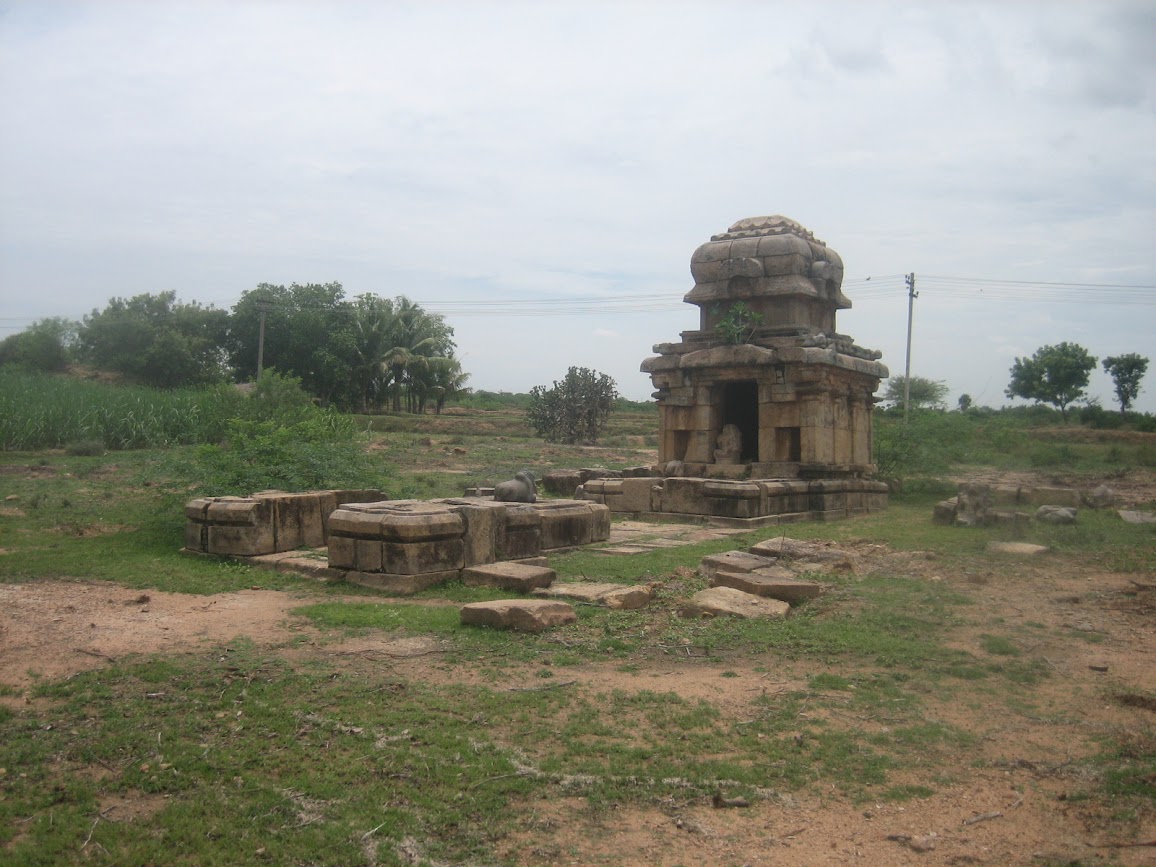 Shiva Temple – This east facing temple is one among the best specimens of 9th century CE temples in Tamilnadu. It is wholly built in granite and is composed of a garbhagrha and ardha-mandapa, the latter has only survived in its base moldings. The adhishthana (platform), is built over an upana, and is composed of five regular mouldings; jagati, tripatta-kumuda, kantha sandwiched between two kampa courses, a pattika and a prati. Its outer walls have four pilasters devoid of any niches. The kapota (cornice) above the walls is decorated with kudu-arches, two on each side. Below the kapota, usual gana-bhuta frieze is missing. Above the kapota runs a yali-frieze. Above it rises a square griva topped with a square cupola. At the four cardinal points of the griva are provided niches once housing Vishnu in the west, Dakshinamurti in the south, Brahma in the north and Indra on the east. Three images, except that of Indra, were found and repaired to their original places in 1938 during restoration of this temple. However, the images are now missing, except one of Dakshinamurti placed over the ground. 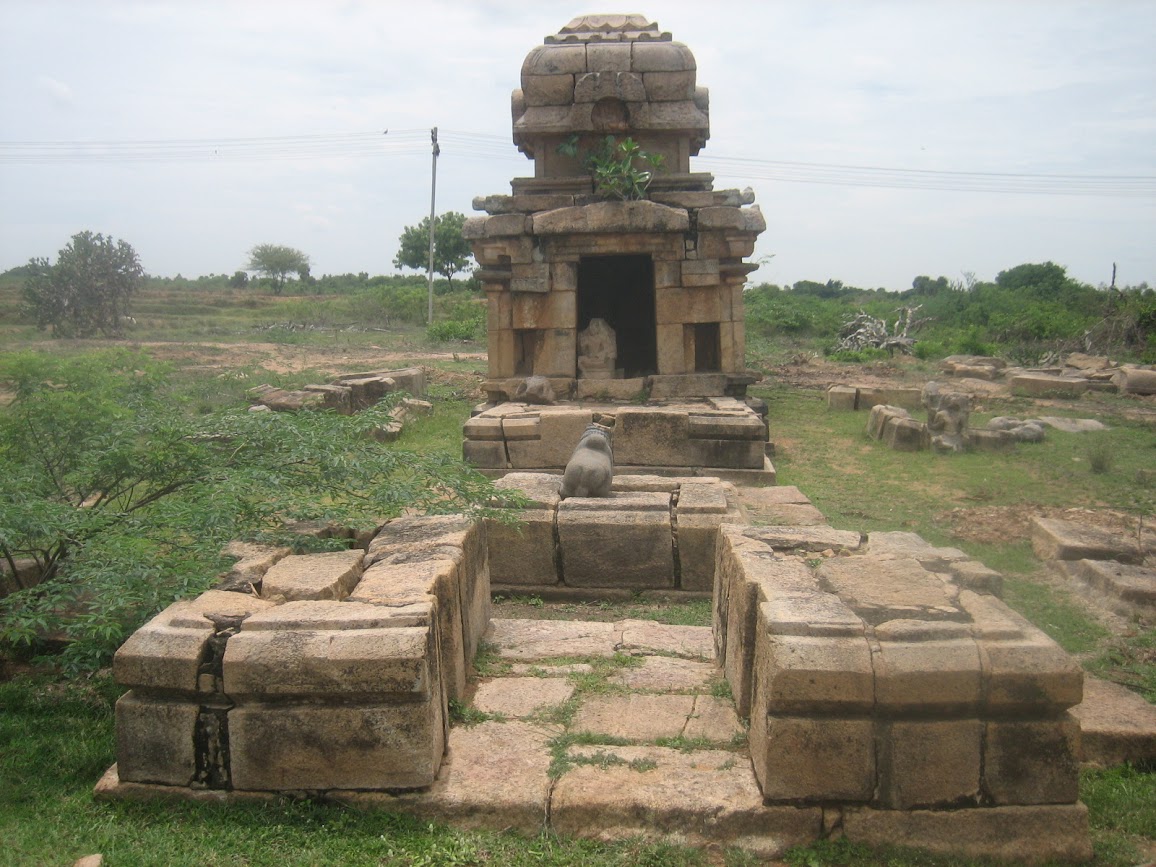 In front of the mandapa is erected a Nandi-mandapa. Three Nandi statues were found during 1938 restoration, two were placed over the griva corners and one above this pedestal. The images over griva are no more there, however the one over the pedestal is still in situ. Traces of seven sub-shrines around the main temple are found suggesting that the temple was designed as a parivara-devata complex. In such a complex, different deities of the Shaiva family are placed in seven different shrines arranged around the temple. The regular arrangement of ashta-parivara shrines is Surya in the south-east, Sapta-matrikas in the south, Ganesha in the south-west, Subramanya in the west, Jyeshtha in the north-west, Chandra in the north, Chandesha in the north-east. All of these were enclosed within a compound wall with an entrance gateway in the east, evident from the remains of the same. Soundara Rajan4 mentions that all sculptures are present but out of position. Among the sculptures are Ganesha, Kartikeya, Durga, Sapta-matrikas, Chandesha, Jyeshtha and Surya. I am not sure of the present whereabouts of these sculptures. 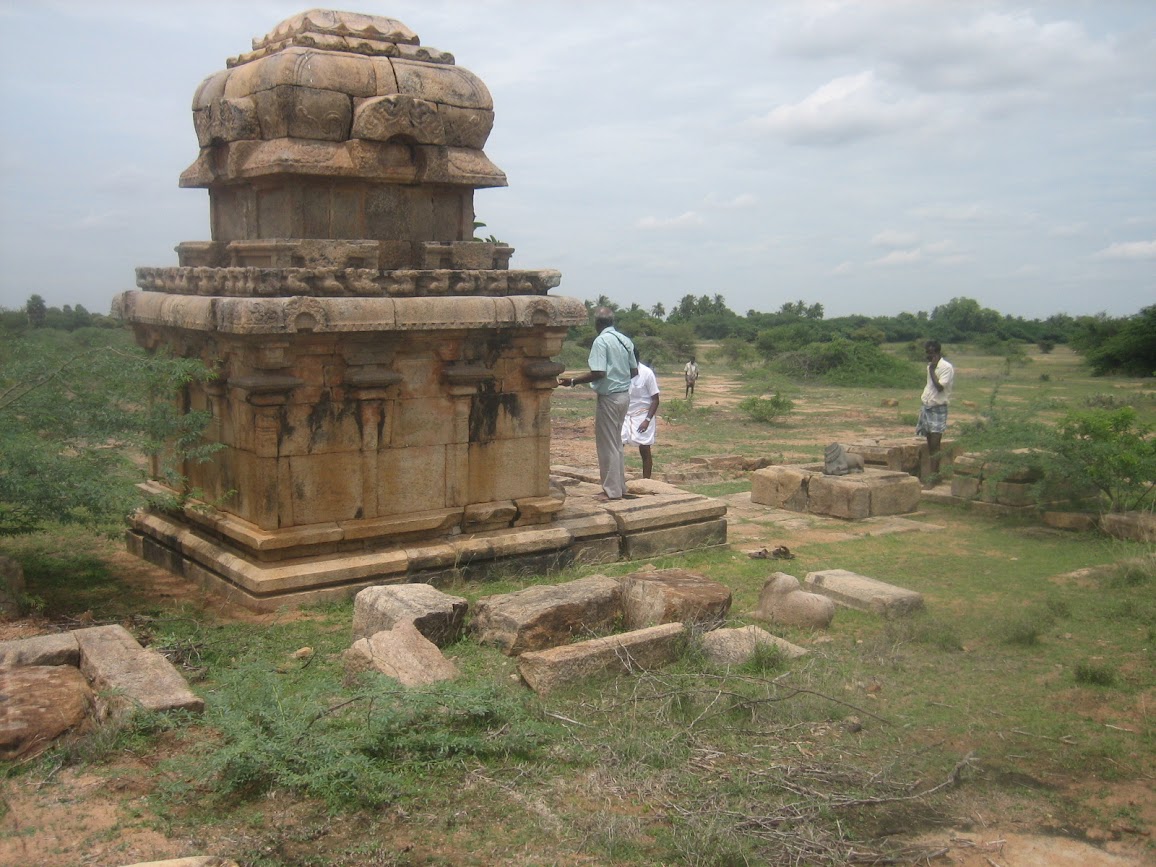 It is generally believed that this temple was raised during the Chola rule of 9th century CE. As there is no foundation inscription found, we need to assess various circumstantial evidences to come to some conclusion. Chola dynasty is as old as the Tamil culture, it being mentioned in Sangam period literature and in Ashokan inscriptions. The dynasty had gone into oblivion for almost half a millennium, only to be revived in mid-ninth century CE under the aegis of Vijayalaya Chola. His line of rulers ruled for another good 400 years resulting in a prosperous period with thriving art and culture. Temple art and architecture, spanning across those 400 years of the Chola rule, is diversified enough to lead scholars suggesting periodic segmentation, early Chola style, middle chole style and late Chola style.

This periodic categorization resulted into defining a linear movement in the Chola art and culture.  When the scholars started applying a linearity logic, this resulted in idioms and styles, sometimes as many as twenty or more. With these many idioms and styles, sometimes one idiom only has one or two temples assigned. With more than twenty idioms to handle, the study becomes very complex and sometimes arbitrary.

There are some pertinent questions to ask. First, whether the theory of linearity works with art and architecture specific to India region? Second, how much the art and architecture got influenced by dynasties and change of kingship? If it can be safely assumed that there were artist-guilds and schools engaged in defining and designing temple architecture, then the question to be asked would be what impact these guilds observe when there is change of rule. If yes, whether that change will be in the vary concepts of design and architectural elements? Also to consider is how much influence a royal house observe over these guilds in order to bring in new dimensions and changing the rules of design and architecture? All these are questions with no easy or direct answers. In absence of a foundation inscription over a temple, its association to a royal house or patronage is always a matter of conjectures. Let’s have a brief look at the previous studies in dating this temple.

Percy Brown5 might be the first scholar who put the Chola architecture into a periodic categorization  for a period spanning across the Chola rule of about 250 years. While enlisting the temples at Tiruppur, Enadi, Visalur, Panangudi and Kaliyapatti, he writes, “The importance of all these buildings, however small many of them are, may be realized when working out the development of the Dravidian style at this formative stage. Most them are constructed of well dressed granite blocks accurately coursed and bonded. Dating from 9th and 10th centuries, that they are in the early Chola style is fairly evident, but at the same time Pallava features are observable, while their relation to the monolithic rathas of Mamallapuram may be noted.”

Brown further mentions that all these structures are very complete in their formation and display a freshness and spirit in marked contrast to the last productions of the declining style of the Pallavas.  So much so that they appear to herald either a  new movement, or to denote some simulation received from another and more virile source. And Brown takes that another source as that of the Chalukyas of Badami. He observes the Chalukya influence in the shape of the domical finial of the shikhara, which has a double flexure contour similar to that in the temples of Badami and Pattadakal.

In the second and revised edition of his magnum opus on the Cholas, Nilakantha Sastri6 adds a chapter on the Chola art. He opines that small Shiva temples of Visalur, Tiruppur and Kaliyapatti are all apparently of the time of Vijayalaya. He also assigns Panangudi temple to Vijayalaya stating that it differs from others as it has niches (deva-koshthas) on its walls.

Douglas Barrett8 explains that contrary to about 20 years of reign as suggested by Sastri and Subrahmanyam, generally accepted evidences support only a short rule of about four years to Vijayalaya and in this short period of reign, we should not expect many signs of artistic activities.  For Kaliyapatti and other similar temples in Pudukkottai, Barrett favors attribution of these to the Mutharaiyars of the second half of 9th century CE. He suggests that absence of niches on the walls (deva-kosthas) in the vimana is perhaps a Pandya influence otherwise legacy of Mutharaiyars is very evident.

K V Soundara Rajan9 asserts that it can be demonstrated that except for certain variations in layout and elevation profile, the developments that took place in the Cola, Pandya and Muttarayar country are, in effect, the logical extensions of concepts inherent in earlier Pallava attempts. He further states that all temples containing Chola inscriptions in form of grants or endowment and lying within the Chola country should not be taken as the Chola creations ipso facto. On this basis, he takes the temples at Panangudi, Kaliyapatti, Visalur and other similar edifices as the Pandya monuments assignable to 860 CE.

Study by Hoekveld-Meijer11 in 1981 on Chola temples is a pioneer work resulting into a complex amalgamation of categories, idioms and styles. She created definition of many aspects i.e. niches (deva-koshthas on vimana wall), types of adhishthana (basement), shapes of shikharas, stories in a shikhara etc. For each temple, she created a sequence of 70-digits, each digit representing a particular aspect. Then she created a geographical profile of all the studies Chola temples, in order to study the regional traits. It was a very elaborate and complex study, however, I fail to see if this resulted in forming a progression path for the temple architecture within the Chola territory.

In her study of over one hundred temples built during the 9th and 10th century CE in the Kaveri river delta, Padma Kaimal12 appears apt while making statement that the art patronage is primarily not the work of kings. She mentions that many have assumed that these temples were built by the kings, it is surprising how few actually were. She asserts that studies aimed at discovering unified and linear patterns of stylistic change will continue to produce unsatisfying results. Kaimal assigns a reign of short five years, 866-871 CE, to Vijayalaya. She mentions that there is no sound evidence of Vijayalaya having built any stone temples. She goes even further suggesting that possibly Aditya I also did not build any temple as limited area over which he exercised his suzerainty and structure of his kingship may have denied him the resources to build temples. Kaimal credits Parantaka I as the first early Chola ruler directly involved in funding temple construction.

When we study this temple from architectural evolution, the temple surely appear to be an early period temple as evident from its ekatala (single story) design, absence of niches (deva-koshthas) and simple square shikhara. What this early period could be, whether it is early Chola period of 9th-10th century CE or 8th-9th century of Muthariayars, cannot be determined with certainty. The geographical region was under the Mutharaiyars as well as under the Cholas in respective periods. In absence of a foundation inscription, we have to live with this unsettled question and wait for future studies in the same.

Inscriptions – There is no published inscription from this temple. One fragmentary inscription mentioned by S R Balasubrahmanyam is dated in the 18th regnal year of a certain Parakesarivarman whom he identified with the Chola king Vijayalaya. However this has not been accepted by the large scholar community.