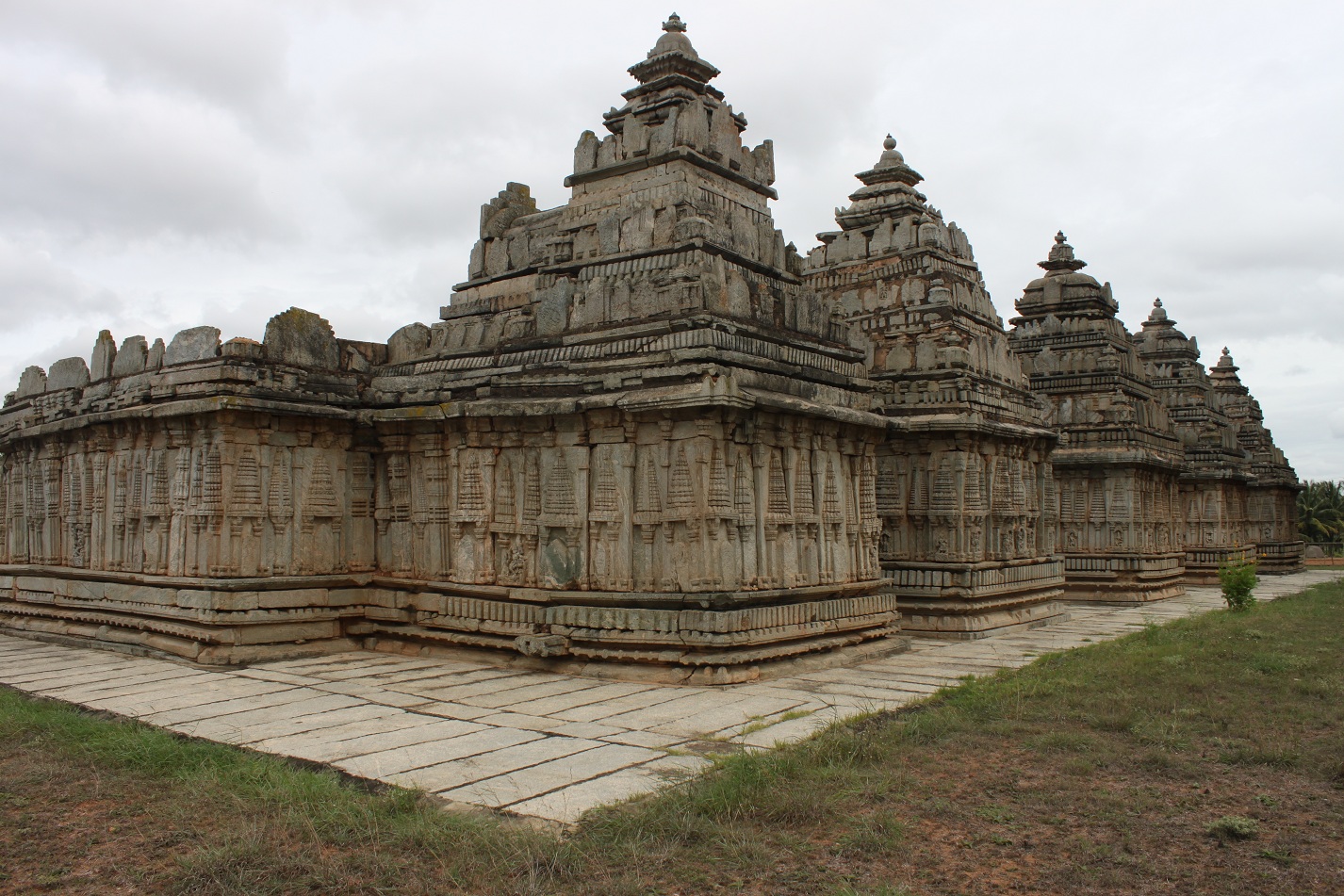 Introduction – Govindanahalli is a village in Mandya district of Karnataka. The town was once famous for its breed of milk-cows.

Panchalingeshwara Temple – This temple is constructed in pancha-kuta (quintuple) style. The temple belongs to the Hoysala period and probably the only surviving example of its kind from their period. The temple consists of five garbha-grhas (sanctum) connected with a common and long navaranga (hall). All the garbha-grhas are provided with their own shikhara (tower) and are connected with the navaranga via suknasi (vestibule).

The whole structure faces east and entrance is provided via two porches facing each other. Each entrance is guarded by its own set of dvarpalas (guardians). These dvarpalas bear Shaiva attributes signifying that the temple is dedicated to Shiva. Each one is holding a damaru, khatvanga (trident) and a gada (club). All are shown with protruding teeth. Hoysala workmanship is quite evident in their style and execution. At the base of these dvarpala, a label inscription reads ‘ruvari Malitamma’.

Each garbha-grha is provided with its set of low-relief dvarapalas. These five garbha-grhas house five different aspects or manifestations of Shiva which are Sadyojata, Tatpurusha, Vamadeva, Aghora and Ishana. On lalata-bimba are depicted Shiva-Parvati sometimes accompanied with Nandi and sometimes with Ganesha and Kartikeya.

A unique sculpture of Vithoba or Vitthala is found in this temple. This suggest that Vithoba sect had penetrated till this territory and had influence over the Hoysala artists. Vithoba sect was a popular sect in Maharashtra, Karnataka, Goa and Andhra Pradesh. However this image suggests that its penetration was quite deep south in Karnataka. But this should also be kept in mind that we do not have other similar examples in this and nearby region, therefore this solitary example does not suggest popularity of the sect.

How to Reach – Govindanahalli is about 6 km from Kikkeri. Kikkeri is on Srirangapatna-Channarayapatna road. It is located 161 km from Bangalore, 75 km from Mysore and 60 km from Hassan. Hassan is the nearest railway station and Mysore is the nearest airport.