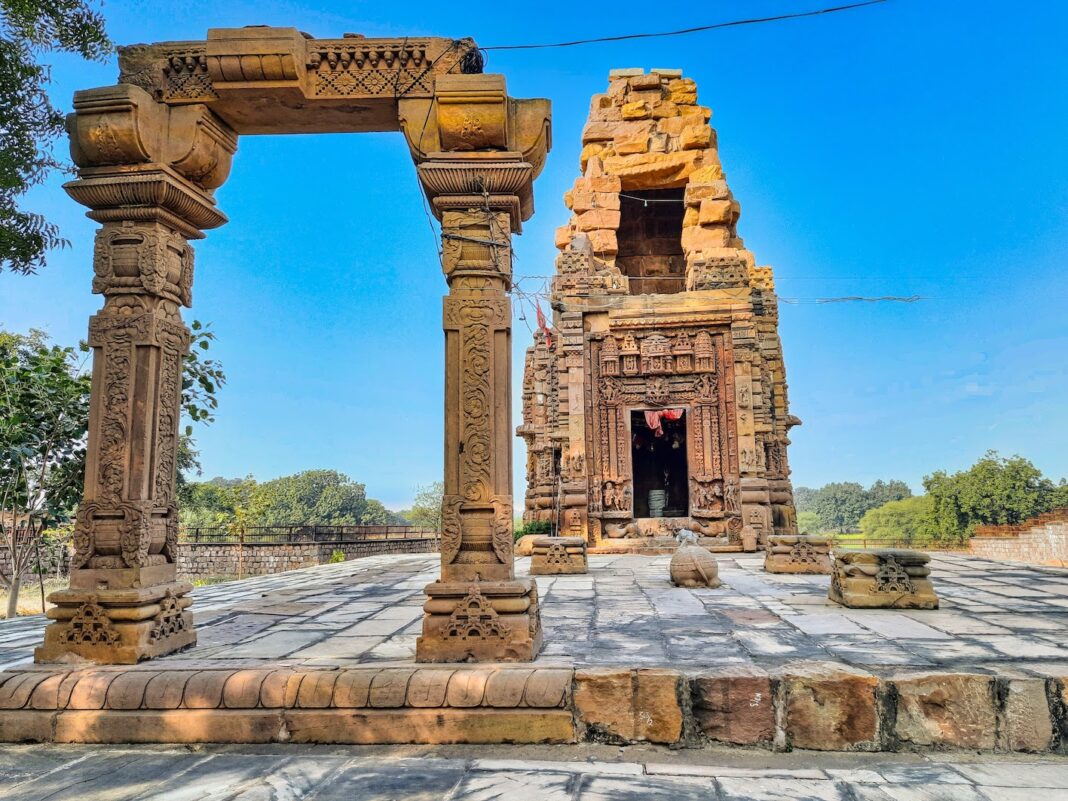 Banjari village is located in Chandla Tehsil of Chhatarpur district in Madhya Pradesh. The history of the village should be equated with the history of Chhatrapur, primarily Khajuraho. Banjari is about 50 KM distance apart from the town of Khajuraho. The village would have been under the Chandellas when they were ruling Khajuraho during the 9th and 13th centuries CE and it may be the period when it gained certain importance that a large temple was constructed. The village came to light in 1998-99 when exploration of the Chhatarpur district was taken up by S. K. Bajpai and his assistants, A. I. Pathak and Pradeep Shukla.1 The exploration was taken under the aegis of Hari Singh Gaur University, Sagar. They find two ancient temples, a flat-roofed temple belonging to the Gupta period of the sixth century CE, and a Surya temple of the 10th century CE. Surya Temple – The temple faces east and is constructed over a jagati (platform). Originally it had a mandapa and a garbha-grha, only the latter survived. The ruins of its entrance and mandapa were scattered as debris when the temple was explored by the team of the Hari Singh Gaur University, Sagar. The temple is built in pancha-ratha pattern, with a broad bhadra-ratha and narrow karna-ratha and prati-ratha offsets. The vertical elevation includes upapitha, adhishthana, jangha, baranda, shikhara, griva, and kalasa, the latter two have not survived. The shikhara has survived partly just enough to provide the outline of the original structure. The upapitha is made of four moldings and above it rises adhishthana, also made of four moldings.

Niches are provided on all the rathas, varying in size and embellishment. All the bhadra niches are empty at present, while dikpalas are housed in the niches over the karna-ratha. Two niches, one on the south and one on the north, are provided on the kapili portion, the southern niche has an image of Ganesha and the northern niche has a mutilated image of Durga as Mahishasuramardini. The niches on the parti-ratha have images of apsaras and celestial damsels. The garbha-grha doorway is made of five shakhas (bands). At the bottom of the door-jambs, river goddesses, Ganga and Yamuna are standing over their respective vahanas, makara, and kachchapa. Next to them are dvarapalas. Further next to them, on either side, is a separate panel. On the left-side panel is shown standing Surya with Aruna between his feet and Danda and Pingla standing on either side. In the right-side panel is shown another deity with three heads, it may represent some form of Surya. Three separate lintels above the doorway are carved with different sets of deities. In the middle, occupying the space spanning across three lintels is Surya seated on his seven-horse chariot, the latter is driven by Aruna. Usha and Pratyusha, stretching their bows, are shown on either side of Surya. On the topmost lintel, to the right of Surya are the Nava-grhas and to the left of Surya are the Sapta-matrikas accompanied by Shiva-Vinadhara and Ganesha at the terminals. The middle lintel has a set of eight deities however their identification is not certain due to damage suffered in their faces and attributes. The last and below most lintel has flying couples holding garlands. The architrave above these lintels has five niches, the middle niche has a dancing apsara and the rest have couples and apsaras. Inside the garbha-grha is placed a modern shiva-linga. The presence of Surya over the lalata-bimba as well as the characters of the dvarapalas, the temple was originally dedicated to Surya. Based on its architectural style and sculptures, the temple may be dated to the 10th century CE.