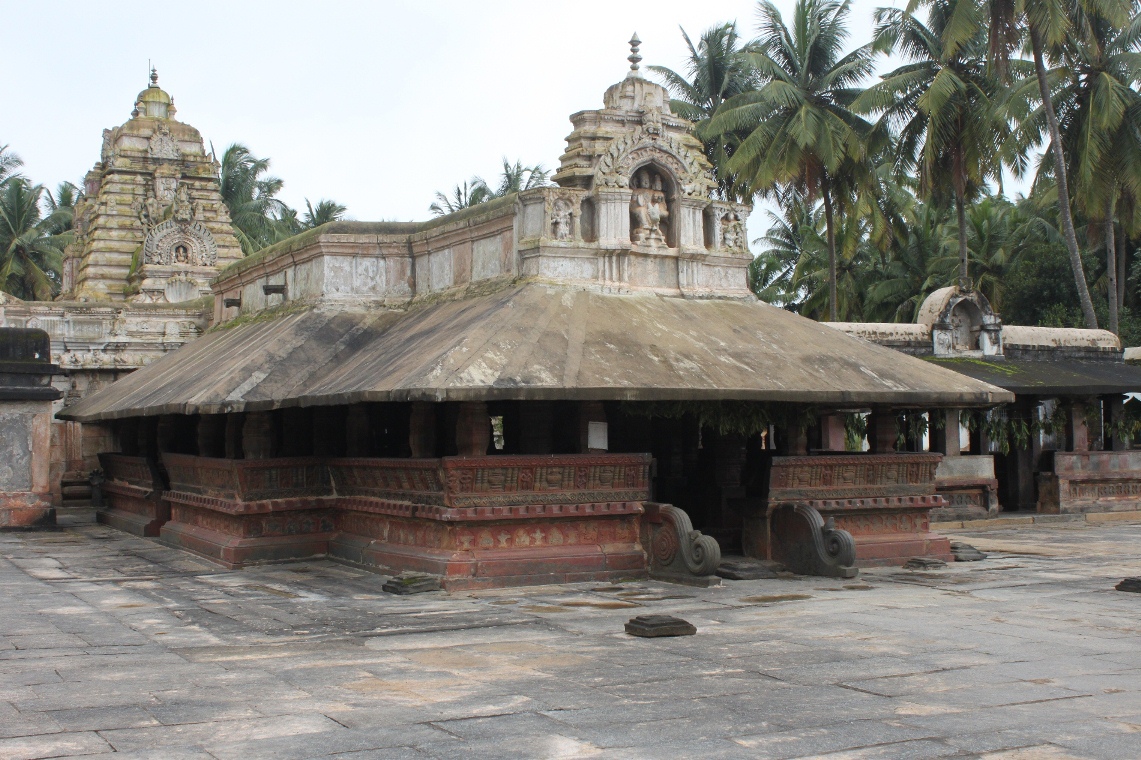 Past References and Political History

Banavasi holds a very important position in the history of Karnataka. It enjoys the reputation of being the capital town of the first indigenous Kannada dynasty, the Kadambas. Though it rose to the position of a capital town during the Kadambas, however it was already playing the same role during the rule of the Chutus who were a feudatories under the Satavahanas. 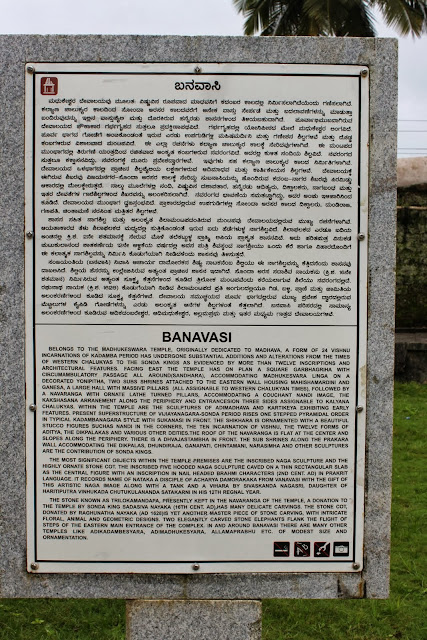 Political History – If we exclude the pre-historic period, then Banavasi might emerge as the oldest town of Karnataka, probably contemporary to Shravanabelagola. However, its antiquity before the Mauryas is still not established. One major reason for this missing piece of information is inadequate number of excavations carried out at this site.

With the distribution of Ashoka’s inscription in southern India, it can be safely assumed that Banavasi was under Ashoka’s dominion. After the disintegration of the Mauryas, there were different regional powers in north and south India and Banavasi came under the Satavahanas. Nasik cave inscription of the Satavahana king Gautamiputra Satakarni was issued from the victorious camp of Banavasi. Satavahana activities around the Banavasi region is also attested from various coins and a solo Satavahana memorial inscription found here.

The Chutus ruled after the Satavahanas and Banavasi became their capital. Though there are not many inscriptions of this dynasty, however most of those are found in and around Banavasi region only. Many of their coins have also been discovered here. They were prominently Buddhists as evident from their inscriptions. After the Chutus, Banavasi became the celebrated capital of the first indigenous Kannada dynasty, the Kadambas. Though it was their capital city, however there is only one Kadamba inscription found here.

While the power of the Kadambas was on decline, an another south Indian dynasty, the Badami Chalukyas, was on the rise. Chalukya inscriptions mention defeat of the Kadambas in the hands of the Chalukya king Kirtivarman I. However it seems that he was not able to conquer Banavasi as this victory is attributed to his son, Pulakesi II. In his Aihole prashashti, it is mentioned that Banavasi appeared to be a water-fort (Jala-durga) due to its being surrounded by river Varada on three sides.

Since then, Banavasi remained as a province under the Badami Chalukyas. It would have been an important province as at one point of time it was being governed by the brother-in-law of  the Chalukya king Vijayaditya. The Shiggaon plate (Epigraphia Indica vol XXXII) mentions that Vijayaditya visited Banavasi to see his brother-in-law, the Alupa king Chitravahana in 708 CE. Chitravahana’s father, Gunasagara, was the first Alupa king who was made the governor of the Kadamba-mandala by the Chalukya king Vikramaditya I as evident from Kigga inscription (Epigraphia Carnatica vol VI).

Due to its strategic location, being situated at the border of the Hoysala and Sevuna territories, Banavasi became the point of tussle between these two dynasties. Both had their small stints over Banavasi however it did not remain with them for long. Hoysala Vishnuvardhana conquered Banavasi in 1135 CE for a small time but later driven out by the Kadamba Mallikarjuna. Sevuna Singhana II also ruled over Banavasi in about 1215 CE.

Banavasi was with the Kadambas, as the feudatories of the Sevunas, when the Vijayanagara empire rose. Later it moved to Sode chiefs and from them to Hyder Ali. With the defeat of Tipu Sultan, Banavasi along with other major portion of Karnataka came under the British rule in 1799 CE.

Mythological Origin – A Banavasi Kaifiyat provides a legend for the origin of the Madhukeshvara linga. It is told that Madhu and Kaitabha, two demons, were killed by Vishnu on instance of Shiva. However, as both the demons were great devotee of Shiva, hence two lingas were consecrated after their names as madhukeshvara and Kaitabheshvara. It is believed that an aspect of Shiva himself is enshrined in these lingas.

John Wilson points to a reference of ‘Story of Allama Prabhu subduing Maya’ from the Mackenzie Collection. Once Shiva and Parvati were seated in their court and Chandeshwara arrived. He saluted Shiva only with one hand. Parvati asked Shiva that everybody salutes him with two hands but why Chandeshwara saluted only with one hand. On this, Shiva turned into his ardhanareeshvara form. Chandeshwara then turned to right where half-Shiva was and saluted him alone.

Parvati got enraged over this and turned Chandeshwara into a skeleton which was later known as Bhringi. Then Parvati said to Shiva that she has conferred her half body to Bhringi and Brahma, Vishnu and rest are concentrated in her, then who is greater, Bhringi or Shiva? Shiva asked Parvati to send a part of her essence to the mortal world and he would send Bhringi there and she might then examine its spiritual truth.

Thus Parvati was born as Maya or Mohinidevi as the queen of the Banavasi king named Mamakara raja. She became a harlot and got associated to the musicians of the Madhukeshvar temple at Banavasi.  Bhringi was born as Allama Prabhu at Karure. Later Allama Prabhu subdued the musicians of Madukeshvar temple and Mohinidevi, and obtained the title ‘Niranjani’.

The Name of the Town – With such rich history and culture, it is not surprising that Banavasi was known with many names in its past. The town has been identified with Banauasei mentioned by Ptolemy. As per a local Kaifiyat, it was known as Kaumadi in the Krita Yuga, Jayanti in the Treta Yuga, Beindivi in the Dvapar Yuga and Banavasi in the Kali Yuga or present age. The various names with this the town has been referred in the past are:

Banavasi in Literature – Banavasi has been mentioned in the literature of different periods and of different languages. Few prominent references are listed below:

Translation – “…to a famous city called Vaijayata in which the demon Timidhvaja lived in a southern direction in the forest of Dandaka”.

Translation – “The women of Vanavasi were so charming as to cause a spell of wonder and amazement.

Translation- “Banavasi is full of fruit bearing mango tress; finely inter-wined betel creepers; full of jaji and sampige flowers; cuckoos singing melodiously at the top of the pitch; humming bees; smiling faces of loving damsels and their lovers. Banavasi is full of patrons known for sacrifice, enjoyment, education, musical concerts. Is it possible to take birth here? If not one should take birth here at least as a small bee or a cuckoo. Whenever I enjoy the cool breeze of south or hear fine words or good music or see the mallige flowers or meet the beloved or vasantotsava is approached, my mind immediately remembers Banavasi, even when somebody is tormenting with a goad”.

Translation – “The beauty of Banavasi was that it is looked as if the face of the goddess earth; very essence of decoration; abode of happiness; and a sea of giving out the fine gems”.

The Buddhist Connection – As Banavasi is an important town since the Mauryas, hence it is fairly to check if there is any Buddhist connection to the town. Indeed there are many evidences to support this hypothesis. These various evidences are given below: