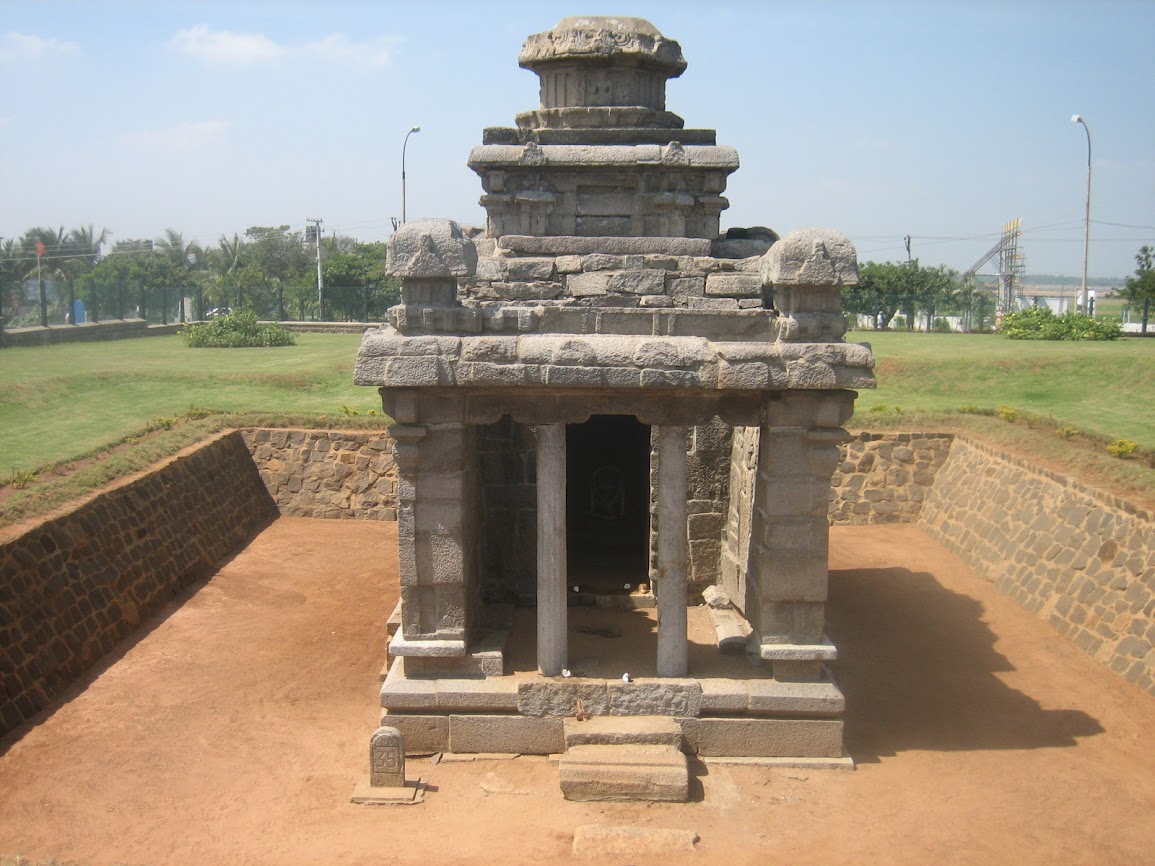 This temple is located slightly away from the main town resulting in a few visitors only paying a visit to it. Built of sandstone, this temple may fall under the simple forms of temples of the Rajasimha period. This dvi-tala (two tier) temple consists of a garbha-grha and a mukha-mandapa. The adhisthana is of padabandha type,-composed of upana, jagati, tripatta-kumuda, kantha between two kampa courses and, a pattika. The walls rising above the adhisthana are left plain without any deva-koshthas (niches). The wall (bhitti) on each side except the front is supported on six pilasters resulting in five niches. As all these niches are in the same alignment, with no projection or recess, whether the temple falls in pancha-ratha or tri-ratha is not clear. With central bhadra, corner karna, and in between pratikarna,  the temple may be placed in pancha-ratha order. Or if we consider prati-ratha as a recess section, then the temple will fall under tri-ratha order. As evident from the kuta-sala-kuta arrangement over the roof, the temple should fall under tri-ratha order. 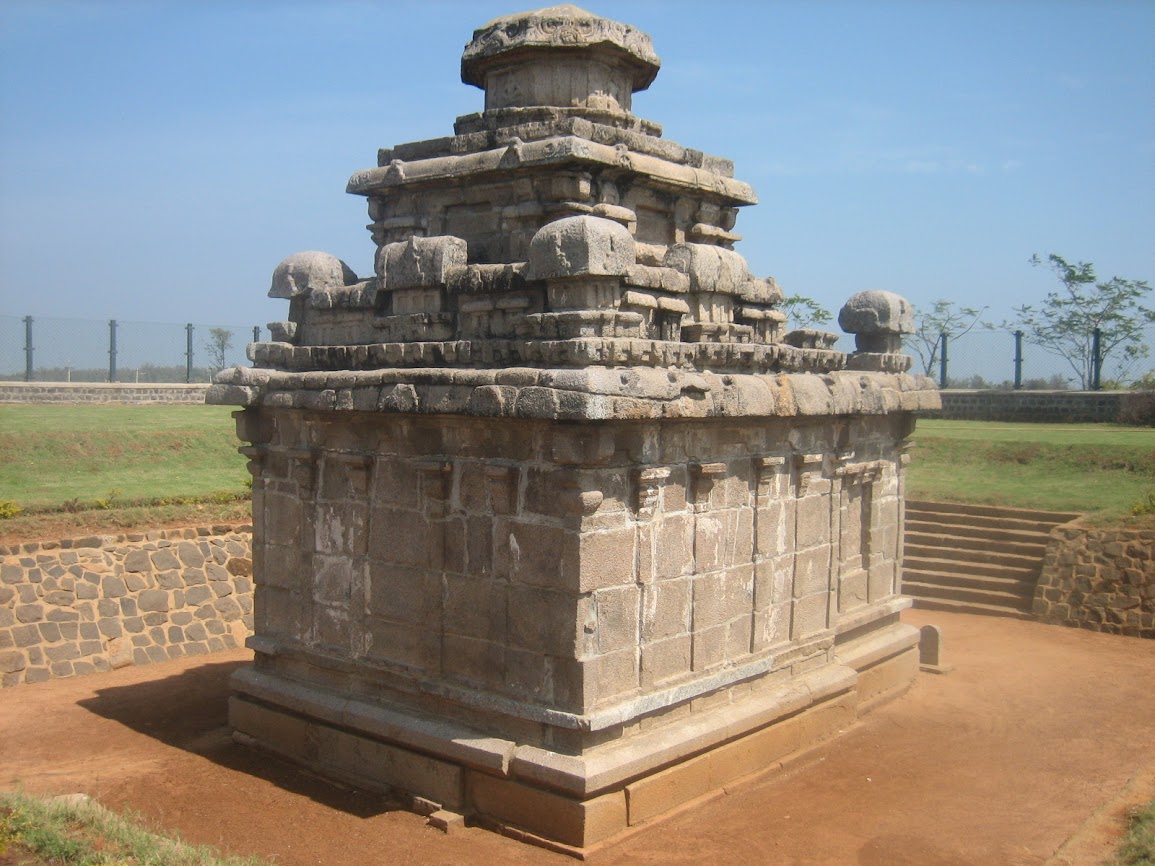 The first tier of the shikhara has an arrangement of kuta shrines at the corners and sala shrine at the center. A similar arrangement is not seen at the second tier. Above that rises an octagonal griva and this would have been topped with an octagonal shikhara. Griva-koshthas (niches) are provided with sculptures. In the east is Shiva with Parvati, in the south is Shiva as Dakshinamurti, in the west is Nrshimavarman with yoga-patta and in the north is found Brahma. 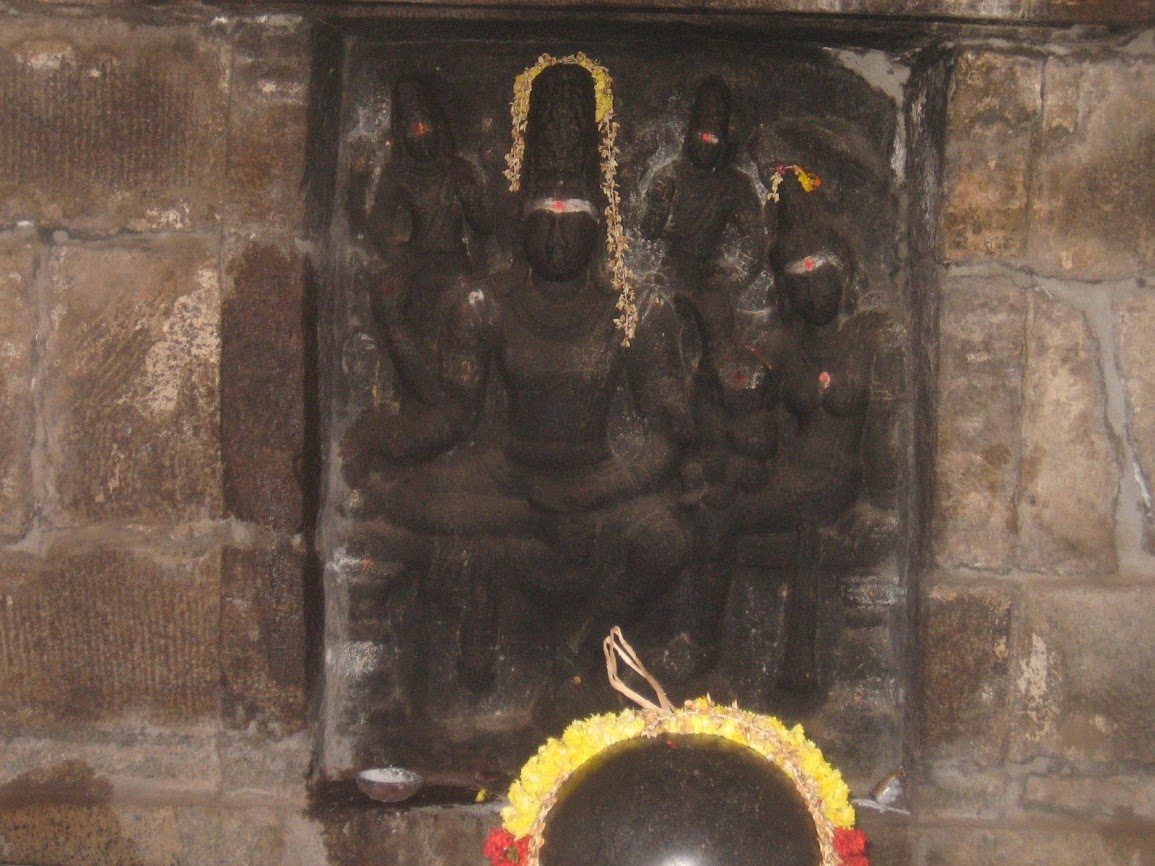 Inside the garbha-grha is placed a shiva-linga. On the rear wall is a Somaskanda panel. Shiva is shown seated with Parvati and baby Skanda in between those two. Vishnu and Brahma are shown on either side of Shiva. Because of this Somaskanda panel, the temple is assigned to the Pallava king Narasimhavarman II Rajasimha (700-728 CE). A cylindrical shiva-linga is placed inside the garbha-grha however it is generally believed that it was a later addition and was not planned within the original scheme.