This bas-relief is commonly known as the Incomplete Arjuna’s Penance. This relief is smaller in size, almost to the half, to its cousin The Great Penance (Arjuna’s Penance) however it is generally believed that the theme depicted on both the reliefs is the same. In case its depicts the same theme, a question arises if this incomplete bas-relief was a precursor or an experimentation prior to the Great Penance relief. The scholars have debated this point as well as its influence over the Great Penance in great detail. The incompleteness of this bas-relief is majorly assumed due to the shallow-relief model used in its execution. However, this may have been the desired design as we will see later in the article. For a detailed description of the various figures and imagery carved over this relief, please refer to an article from IndianColumbus.

Two separate boulders of the same rock, with a gap in between, were utilized to carve out various figures participating in the overall theme of the relief. On the left upper portion are shown two major figures standing amongst a mountainous environ. An ascetic is standing on his one leg with his other leg bent and raised. His arms are stretched over his head, both hands clasped together with palms facing the sky. His sunken ribs, veins in his arms are carved properly however detailing of his legs such as knee etc. is left plain. On his left is standing Shiva, with four arms carrying a parashu and an unidentifiable object in his upper hands. His left lower hand is placed over his waist and right lower hand appears to be in a posture of a grant however it is not exactly in a typical varada-mudra. Near Shiva, on his left, is a gana, probably holding a basket over his head. Another figure with his hands raised in adoration is carved above the mountains, on the left of Shiva. The portion of the boulder where the ascetic and Shiva stand is cut-off from the rest and is projected out such as to mark a differentiation.

The lower left portion and the right portion of the relief is carved with various figures, animals and humans, all shown moving towards the gap between these two boulders. Among these different figures are found hunters, wood-men, kinnaras, vidhyadharas, gandharvas, siddhas and ganas. Among the animals are found boar, lions, elephants, deer and birds. The natural gap was ingeniously utilized and conceived as a water-body to fit-in the overall theme of the relief. We believe that this bas-relief depicts the Gangavatarna or Descent of Ganga theme. This means the ascetic is king Bhagiratha who did a severe penance to Shiva for bringing river Ganga to the Earth. All the remaining figures, moving towards the gap representing river Ganga, have raised their hand in adoration while Ganga flows down to the Earth.

While we are sure that this relief depicts the theme of Gangavatarna, we are not sure if we can term it an incomplete relief. The fact is that each and every monument in Mamallapuram is left in some stage of incompleteness. The Great Penance is also of the same nature, as we find the lower left portion left unfinished were a three-bays mandapa cave-temple was probably conceived of. In such a situation, will it be apt to term this relief as incomplete? Various scholars1 have tried to explain this unfinished aspect to these monuments suggesting that it was a desired method of leaving an unfinished instrument in a structure to allow further extensions of the same. This also depicts the eternal nature of the monument expecting erasures, adaptations and extensions in future courses.

How do we define incomplete? Simple, what is not complete is incomplete. How do we define complete? This is tough as complete of one person may not be same as that of another person. We encounter this daily in our walk of life. If we apply the very same principle on this bas-relief, we will find that this bas-relief is more or less very much complete. All the figures and imagery have been carved over this relief are complete in their forms and design. They are all more or less executed in shallow relief mode, except few specific figures. We can safely say that the architects may have done the same in bolder and deep relief mode, however they did not select that mode, what those reasons may be we do not know. Based upon the plaster remains over few images, Rabe2 has suggested that the the idea of the shallow relief was to cover up the same with the plaster such as we see in stucco works. He might be right however how to prove that the plaster remains are from the days of the Pallavas. Kaimal writes, “I consider this flattened quality a function of style rather than of the incomplete state of carving. The surfaces of the these shallow images are essentially finished. Further work on this relief would more likely have focused upon removing the shelves of rock that still hang over some figures and upon smoothing the surfaces between figures”.3 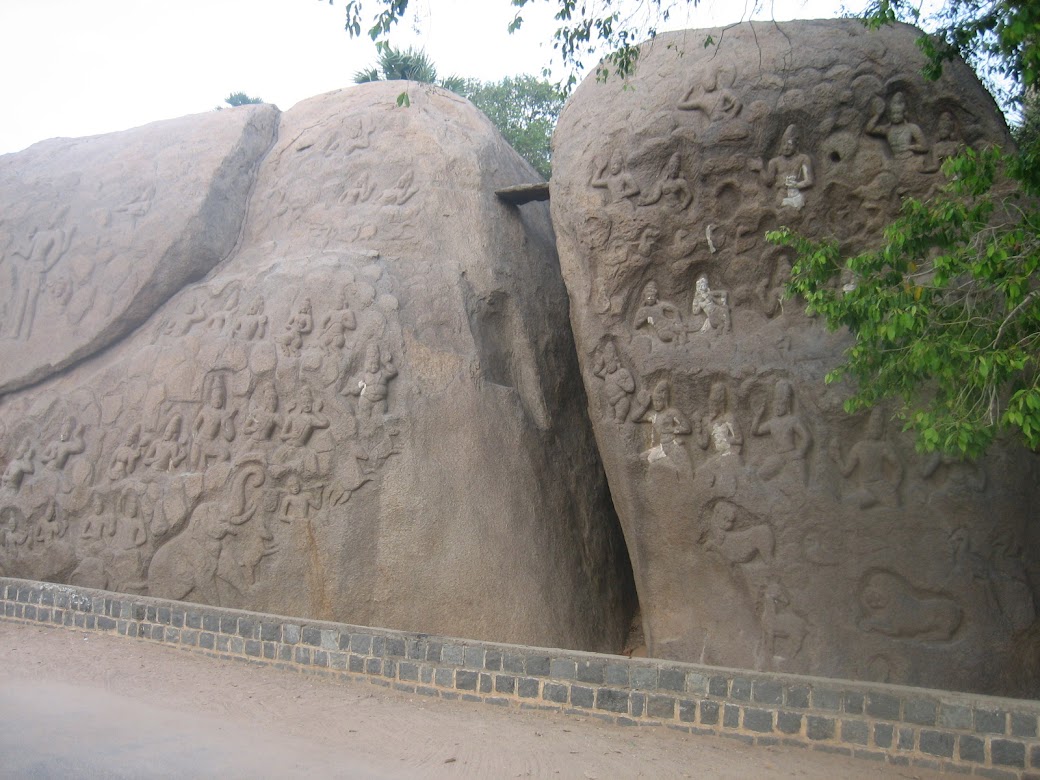 Another discussion point is if indeed this panel is incomplete, why it was abandoned in this stage. One argument may be that the designers found the rock boulders not appropriate to go forward. However, there does not appear any significant defect in these rock boulders, except the projection of the left upper corner, a damage suggested it being struck by lightening4. However, there is no sound proof behind the same. To my knowledge, no serious attempt has been made on understanding why this relief was left in its present mode when more or less all images have been carved or etched out. What mistake did the builder realize that they abandon the relief in this state? As a considerable amount of time and efforts would have already gone in executing this bas-relief, if was abandoned prematurely, there must be some string reasons behind. To my knowledge, as there was no such strong reason apparent to us therefore it may be safely assumed that the relief was carved the way it was designed and intended.

If accepted that the relief represents the original idea, then we may also say that though there are similarities in the present relief and the Great Penance relief however it is not certain if both depict the same theme or one draws inspirations from other. Kaimal5 says that this smaller relief appears to have been a source of inspiration for the Great Penance relief and the two reliefs are clearly variants on the same composition. She tells that Arjuna’s penance is not at all evident in the smaller relief and the ascetic is shown doing penance of five fires. We need to be clear that there are only few similarities in both these reliefs however these cannot be treated as the true copies of each other. The present relief has many elements missing which are found in the Great Penance. What both the reliefs have in common is the attention and focus given to a water-body, which in all probabilities may represent a river.

Let us discuss on few aspects which make this bas-relief different from the Great Penance. The first point to notice is that Shiva is shown without his ganas. A gana shown on Shiva’s left appears to be little detached from him and hidden within a cavern. Even if he is considered as a part of his retinue, he is the lone gana seen here. In the story of Bhagiratha’s penance and Arjuna’s penance, it was in the former where Shiva appeared over the scene without his ganas. In the latter case, Shiva appeared with his whole group of ganas. Another point of notice is the absence of the tiger-belly gana, the supposedly anthropomorphic form of pashupatastra, as found in the Great Penance. Rest of the the imagery is very general, no specific person, or group or animals deserve any special attention except they all are shown moving towards the gap between the boulders. All these aspects go well with the theory that this relief depicts Bhagiratha’s penance and the descent of Ganga. Among the missing imagery in this bas-relief are the ashrama scene with its sages, river-bather group, hypocritical cat, all these are connecting elements in the Pandava story however these play no significant role in the Bhagiratha story or the descent of Ganga.

From the above we can conclude that this bas-relief was designed and conceived to represent the descent of Ganga as an outcome of the severe penance of Bhagiratha to Shiva. The bas-relief is more or less complete in its composition, however it differs from the other Mamallapuram works as it is executed in shallow-relief mode. What were the reasons behind this, was there a plan to further refine the imagery by removing extra rock or was there a plan to provide bold relief using stucco, we do not have very clear information on the same. This bas-relief differs from its cousin, the famous Great Penance, and there are high chances that both may represent different themes. Two bas-reliefs situated about 300 meters apart and depicting more or less the same theme appears very improbable.