Hindu temple architecture is broadly categorized into three categories, Nagara, Dravida and Vesara. This classification is mainly based upon the geographical division, i.e. Nagara style is predominantly of northern India while Dravidian is confined to the southern part of India and Vesara in the middle region. This categorization fitted well during the early period of the Indian archaeology, however with time and extensive researches gone into, we now can safely say that this regional categorization is probably not the best approach. Our knowledge has been greatly enhanced after discovery of various architectural texts, like Manasara and Mayamatam. Many regional texts and agamas have also improved upon the understanding over the temple architecture with regional variances.

Apart from texts, there are many inscriptions referring to different designs and styles of Hindu temple architecture. An inscription in the Amrtesvara Temple at Holal1 in Karnataka refers to four temple styles, Nagara, Kalinga, Dravida and Vesara. The inscription mentions one sutradhari, architect, named Bammoja, said to be the master of chaturjati (four classes) of temples namely Nagara, Kalinga, Dravida and Vesara. This inscription is dated to 1231 CE and belongs to the reign of the Seuna king Singhana.

Kalinga style is identified as a sub-class under the Nagara category. As the name suggests, this temple style was mostly confined within the then Kalinga region, present Odisha. N K Bose’s “Canons of Orissan Architecture” was a milestone in understanding the Kalinga temple architecture. Bhuvanapradipa was the main source of information for Bose’s study. It primarily defines three kinds of temple styles, Rekha, Khakhara and Bhadra. It further classifies thirty-six types of Rekha, five types of Bhadra and three type of Khakhara temples.

Silpaprakasha is the most famous text describing the Odishan temple architecture. It was authored by Ramachandra Kaulachara who belonged to the reign of king Viravarman. He quoted an earlier text Saudhikagama. Silpaprakasha contains guidelines on overall temple construction, from the base of the temple to its top. It has two sections, one describing the construction and decoration of jagamohana and other garbha-grha. It provided details on all sections of the temple, their overall proportions even to the minutest element. The book also discusses soil selection and test, orientation, directions etc. It is dated in 10th-11th century CE. It was translated in 1966 by Alice Boner and Pandit Sadashiv Rath Sharma. A second translation was done in 2005 by Bettina Baumer and R P Das.

A typical Kalinga (Odishan) temple consists two parts, a sanctuary where an idol or linga is placed and a hall where pilgrims can view the lord installed in the sanctuary. The sanctuary is referred as deul while the hall is known as jagamohana. Early period temples were devoid of jagamohanas. As the existing temples were extended by adding a jagamohana at some later time, therefore the joint between these two units was not coherent. The architects soon realized this and thus started constructing both the units, garbha-grha and jagamohana, together resulting in a unified joint. At a later time, when the temples became instrumental in social gatherings and festivities, further structures were added. First came nata-mandira (dance hall) which got added in the same axial alignment with the original unit. As the name suggests, nata-mandira was added for dance performances usually held during festivities and specific occasions. As the crowd grew and temples started getting bigger and grandeur, another hall is added, known as bhoga-mandira (kitchen). Bhoga-mandira was required to make bhoga for the deity and devotees.

Kalinga temple style is broadly classified into three main categories, namely Rekha, Pidha and Khakhara. Rekha-deul (temple) is distinguished with its square plan topped with a curvilinear tower. A Pidha-deul, also referred as Bhadra deul, also has a square plan topped with a pyramidal tower composed of horizontal tiers arranged in receding manner. A Khakhara deul is surmounted with a barrel-shaped (vault-shape) tower over a rectangular plan. Most of the Kalinga temples fall under the Rekha category. Very few temples depict Khakhara style, usually these temples are dedicated to a form of Devi. Pidha-style is usually used for jagamohanas but not for the main deul.

Over a square (as in Rekha and Pidha) or a rectangular (as in Khakhara) plan, rise the walls of a temple above which is supported the tower of the same. From the ground to the top, four different divisions were made, constituting pitha, bada, gandi and mastaka. Pitha is the platform over which the entire structure of the temple stands. It was not a mandatory part of a temple and many temples, early as well as late, do not have pitha in their plan. Bada is the vertical wall over which tower is supported. Gandi is the lower part of the tower while mastaka is the upper part of the tower.

The horizontal divisions of the bada are also properly articulated in the Shilpa-texts. In early period temples, bada is seen divided into three parts, pabhaga, jangha and baranda. Pabhaga is the lowest section of the bada, connecting it to pitha or directly to the ground. Pabhaga is consisted of a set of mouldings. Early period temples used to have three mouldings at pabhaga which later increased to four and five in the later period temples. These mouldings are named khura, kumbha, pata, kani and vasanta. Jangha is the main and the largest portion of the bada. It is portion where most of the images of subsidiary deities are placed. Baranda is composed of a set of mouldings, varying from seven to ten, connecting the bada to the gandi. In later period temples, the jangha portion got divided into two storeys, tala-jangha and upara-jangha, separated by a madhya-bandhana. 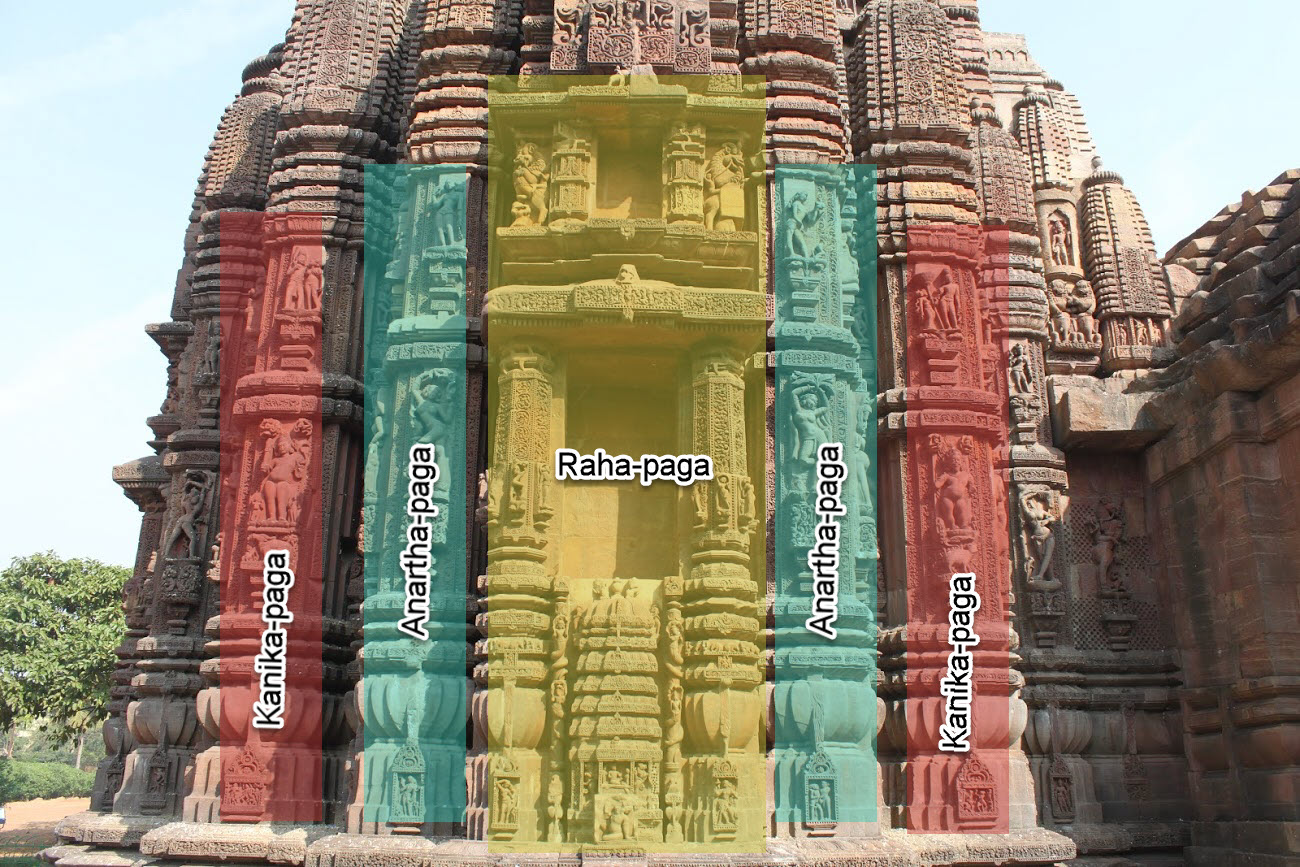 The vertical façade of the jangha is divided into various projections and recesses. Early period temples had a central and two corner projections, therefore referred as tri-ratha style. Each projection is referred as ratha or paga. The central projection is known as raha-paga and corner projections as kanika-paga. In early period temples, the height of their tower was kept low giving a squat or bulky appearance.  With time progressed, the tower height was given proper elevation, reaching to three-four times the length of inner chamber. To achieve this, deul size was also enhanced, therefore the later period temples started having pancha-ratha, sapta-ratha and nav-ratha styles. In a pancha-ratha pattern an additional projection is added between kanika and raha, referred as anartha-paga (anuratha-paga). Recess portion between the pagas is named as anuraha. Additional projection in saptha-ratha pattern is referred as pratiratha-paga. These pagas were adorned with niches usually housing subsidiary deities. Raha-paga usually has a large niche, housing parshva-devatas. In case of a temple dedicated to Shiva, among parshvadevatas, Ganesha is placed on the south, Parvati on the west and Kartikeya on the north. In some cases Parvati was replaced by Mahishasura-murti. Niches over kanika-paga usually house dikpalas. In cases of temples dedicated to Vishnu, his incarnations took place of parshva-devatas; Varaha, Narasimha and Vamana.

Gandi is the main distinguishing element for the different Kalinga temples. In a Rekha-deul, gandi is made of a curvilinear spire, which inclines inwards, more sharp at the top. This spire usually follows the same ratha pattern as of bada below, i.e. spire of a tri-ratha bada also showcase three projections, thus following the tri-ratha pattern. Gandi is divided into different tiers prominently visible on the kanika-paga. These tiers are known as bhumis. These different tiers are separated by bhumi-amalas. The topmost course of the gandi is known as bisama.

Gandi of a pidha-deul is made up of overlapped tiers, receding going upward, forming the shape of a pyramid. In later temples, these tiers were arranged in group of twos separated by a recessed moluding known as kanthi. These group of tiers are referred as potalas.

Gandi is topped with mastaka (head). Mastaka of a rekha-deul is comprised of beki (neck), amla (ribbed-disk), khapuri (skull), kalasa (pot) and ayudha (weapon). Mastaka of a pidha-deul is made of beki, ghanta (bell-shaped element), another beki, amala, khapuri, kalasa and ayudha.

Entrance doorway to the sanctum (garbha-grha) or jagamohana (hall) usually carry nava-grha (nine planets) over the lintel. In early period temples, usually only eight grhas were displayed, leaving Ketu. Later period temples started having nine grhas. Among the famous decoration motifs, a lion mask with beaded strings issuing from his mount known as kirti-mukha is found on many temples.